Id like to take a moment in this. my inaugural review, to chat about the RTS (real time strategy) or MOBA (Multiplayer Online Battle Arena) scene. For many years now we nerds have logged into DotA (Defense of the Ancients) to get our daily fix of hero/champion/summoner butt kicking. In these unsure days there are but two newer versions worth mentioning. The first I will discuss is Riots League of Legends or LoL as it is affectionately known as, later we can get into S2 gaming’s Heroes of Newerth. The League of Legends is a beautiful and brilliant spin on what many believe the next generation of MOBA games will strive to become. The premier difference between LoL and it’s predecessors being that Riot is not trying to create another DotA port. They have the unique privilege of working with one of DotA’s creators “Steve Guinsoo” Freak. Along with a slew of talented employees whose backgrounds include development on Microsoft’s XboX, Blizzard’s World of Warcraft, Star Craft, Brood War, and Wizard’s of the coast product Magic the Gathering. Their employee profiles and credentials can be found at (http://www.riotgames.com/company/team).

With that under our belts let’s get our hands dirty and begin discussion over the many quality’s of Riots product. League of Legends is a fast paced multiplayer game that leads you the “summoner” in epic combat across the Fields of Justice. LoL brings endless hours of replayable content to your fingertips including hours of character background and fluff. They have two stylish maps to choose from the first of which being

Though Riot is working on more maps these are the two available for us players at this moment.

Game play overview – For those of us who are new to the Real Time Strategy scene I will describe a bit about the types of character you will be sinking your teeth into with the league. In LoL champions must be earned, there is a free champion rotation every week. If you would like to own one you need to do nothing more than save up your influence points (Ip) Ip is something you earn for playing a game. quality of game play will factor in on your Ip total at the end of every game. A typical win is worth around 100 Ip where a typical loss yields around 48 and the first win of the day bonus is worth over 200. The game has five basic types of character even though Riot releases a new champion every two weeks. Champion types include tank, ranged, support, nuker, and carry. These can branch off into hybrid forms of each, that’s not so important for our review. You will pilot your Champions across the battle field to defend your towers and assault the opposing. You will not be alone in this, your team has minions that will spawn from your base and walk in a set path across the map until engaged by an opposing minion or champion. They have an aggro meter so watch out early game. If you attack an opposing champion where they can see then look out because the pain train is coming your way. There is also a bit of forest (referred to as the jungle) that has neutral monsters in it. Some of whom are powerful enough to bestow upon your champion a buff (lizard is red for damage and golem is blue for mana regeneration). There are a select few champions suited for jungle warfare from level one. Riot has also placed a few power house mobs in there for you. one of them is the Baron Nashor he is a bad, bad man. 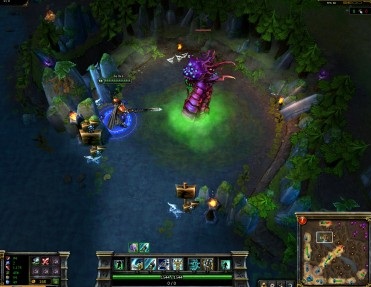 Even very late in the game it will likely take many team members to combat him. Trying to take him on early game will likely lead do your demise. The profits of a victory over this gent however will give your entire team a massive buff the likes of which the two smaller singular golem and lizard buff can only strive become. (some of us may know him by a different name). Riot has a leveling system for you as the summoner, mastery skills, summoner skills, and runes. As

you play your account will level up starting at level one and capping at level thirty. These levels will earn you more mastery points to be spent in any of three trees of offense, defense, and utility.(*and you may re-spec anytime before playing a game) The benefits of these grow to include more skills for your mastery tree and at higher levels more summoner spell options. All of this is a way of saying you can play any of the champions the League offers in a unique fashion. During any game of LoL there are a few key components that will never change. FIRST never face check a bush that you are not prepared to fight an enemy over. In the League of Legends bushes block line of sight and thus give any opponent massive advantage over you. Second there will be a solo lane, this is generally the top in the Twisted Treeline and the Mid lane in summoner’s Rift. The type of champion that takes this lane is typically called a carry. A carry is some one who generally is a bit more gear and or level dependent, and whom will benefit from solo exp. As well as not having to fight over another team-mate for creep or minion kills.

Ranked play – Can be played as a 3v3 premade team, a 5v5 premade team, or 5v5 solo. The player with the highest rank on team with take care of bannings. there are four in total. Teams then take turns selecting their comp before the game begins.

Normal play – There are no bannings and each teams character selection is private. there can be duplicated characters on opposite teams in this game mode.

As gamers we all have these different egos living in our heads, or hovering over our shoulders if you would. The one ego is highly cultured and potentially well dressed. It cries out to us for rich and powerful content. This is the side of you that wants a story you can really sink your teeth into something you can eat up and when all is done still want more. This is how or why we as gamers enjoy playing the types of role we are so suited into.On the other side of the aisle or that gray matter we call our brains is our less fluffy personality. He or she may be depicted as a bit more ruthless maybe a bit more rugged in demeanor. They are our inner PvP master or tiny master of evil if you would. This ego wants power, unrelenting power and if that means exploiting every in game flaw you better believe we will take it. As if Riot had these notions in the forefront of their minds when developing the League of Legends they have brought both of these things to the table. First a brilliant combination of Role – play story arc (did i mention you can be a lightning ninja?) and the second being a competitive game play the likes of which could sate the most ruthless power gamer and at the same time not fall off a bit in the rich fluffy goodness department. Riot has also added in a number of custom skins you may purchase for the champions you enjoy most. These skins do cost money and seem a way of adding further flavor to the content. Cost on these champion outfits range from 5-20 dollars American. and are regularly on sale.

oh yeah, a bit of icing for the cake. It’s free, that’s right lady’s and gents Riot is bringing you their product for nothing out of pocket. In fact if you would like to play you need nothing more than to log into their site and create an account. The only monetary obligation involved would be if you chose to partake in a new skin for a favorite champion of yours.

Finally I have here a little teaser video. The champion number has increased to nearly eighty since this was made.

If you would like a more in-depth tutorial you can find me in-game, just add Jerkn.

If you would like to join the League of Legends community here is a link to sign up and make your own account … Hope to see you on the fields of justice Capsule computers members.

Christopher Adams
My gaming experience ranges from the old school starcraft, diablo, baulders Gate era to the modern MMo scene. I am a fan of RTS games currently enjoying Hon and LOL regularly. Having lost a year of my life to frozen throne main tanking for section Eight of bone chewer during it's highlight period, yes I went alliance for a while though Horde at heart always. Don't judge me before understanding we had litch king down in april ... and I needed my achievements!!! but that was another life, one filled with rolling polygonal graphics, with daily quests as necessary as a junkies next quick fix, the desire, no the NEED to complete all the warsong gulch quests. A breath of relief after drudging up so many meals skipped and so much sleep lot reaching 2400 pvp raiting. This should be the Wow players motto. An oath to be chanted, the sworn dedication of the mmorpg player. These days are much more lax I plug away at starcraft II quests and dabble in RTS games. I am critical of game mechanics, I come from a time when left clicking for movement and right clicking for an attack were the basic player mastery set. Advanced players had BINDS (so advanced to include holding shift for their clicks so as to access their utilititary abilities). These days entire gaming keyboards a must, look at the logitech G series line the latest of which having 54 G keys for macros alone. No more are the days of cleaning out the mouse wheels with an alcohol swab no, no we have products from razer and steel series to blow our dpi beyond what we as normal humans can possibly handle. I MEAN CMON my razor lachasis has 5600 dpi ... how can a gamer do anything involving precision with that cranked up. Yet we all feel the need to own it, and so would judge a new mouse on not being able to complete the same high end tasks. Such is the life of a PC gaming enthusiast ... there are two sides of this isle though, as there seems to be with all great debates. Mine is much simpler than most Rp Vs. Pvp and I am a Pvp player who Loves, Loves, Loves to power game. --Pax