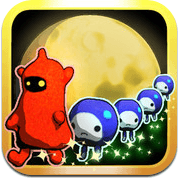 Overview
From the minds of the developers of games like Rez, Child of Eden and Lumines comes KOTOMON.  KOTOMON was created by Monstars Inc, (no, not the movie). Monstars is a new development company headed up by Osamu Kodera, and KOTOMON is their first project.  KOTOMON is available on the App store for iPhone and iPad, and it sports universal support.  How well does it stand up to the games before it?  Keep reading to find out.

When one thinks of monsters, one usually envisions something like the Chitauri from the Avengers movie.  However, in KOTOMON, that perception is entirely different. The good monsters in KOTOMON are cute and lovable, while most of the enemy monsters in KOTOMON are small, evil urchins that live only to impede the good monsters.  No explanation is really offered as to why these monsters, good or evil, behave as they do.  But, in a game like this, no explanation is really needed. 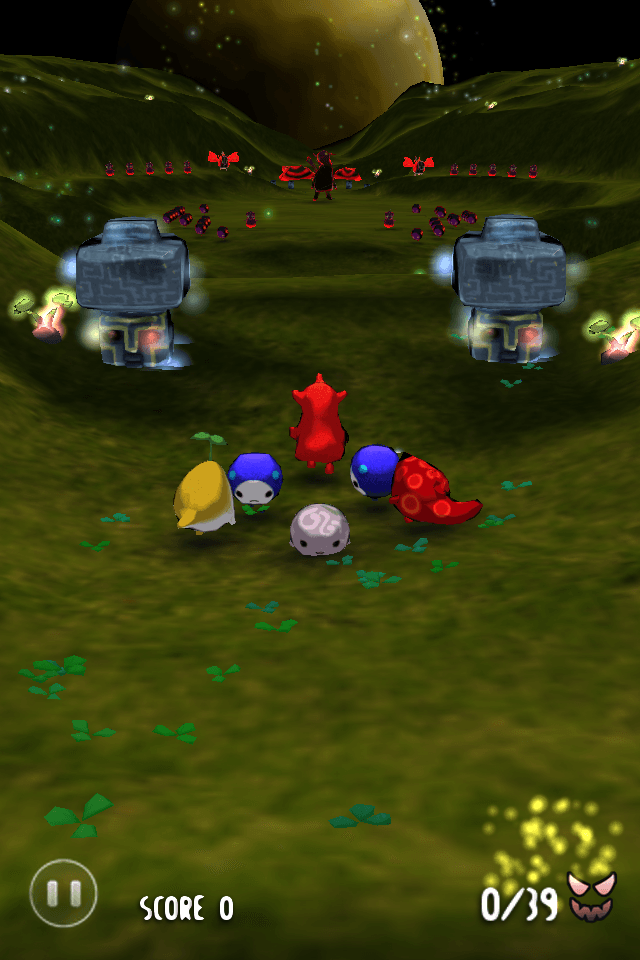 Gameplay
You play as KOTOMON. By moving your finger around the bottom of the screen, you can control where KOTOMON moves. One day, you find a spiky ball, and as you roll it along the ground, a creature suddenly pops out of it.  Amazingly enough, this creature will stick to KOTOMON if KOTOMON comes close enough to it.  Once the other monster is stuck to KOTOMON, you can also tap the screen to send the other monster flying off.  Once the monster has slowed down, he will return to you and follow KOTOMON until KOTOMON needs to shoot him again.

In each level, it is your goal to reach the campfire at the end.  While you can just rush through most of the levels if you desire, you won’t get a very good score.  To get a good score, you must defeat the enemies in each level.  Defeating the enemies require that you use one of the monsters at your disposal to “shoot” at the enemies.  Each monster has special abilites.  One monster acts like a pinball and will take out a slew of enemies out in one single attack.  A second monster detonates on impact. Another enemy shoots fire out his mouth, although he must be attached to the KOTOMON to perform this action and he can’t be shot. If you kill multiple enemies in a row, the game awards with you even more points via combos.  In addition, shooting enemies changes up the music, similar to games like Rez and Child of Eden, which is a really neat effect. 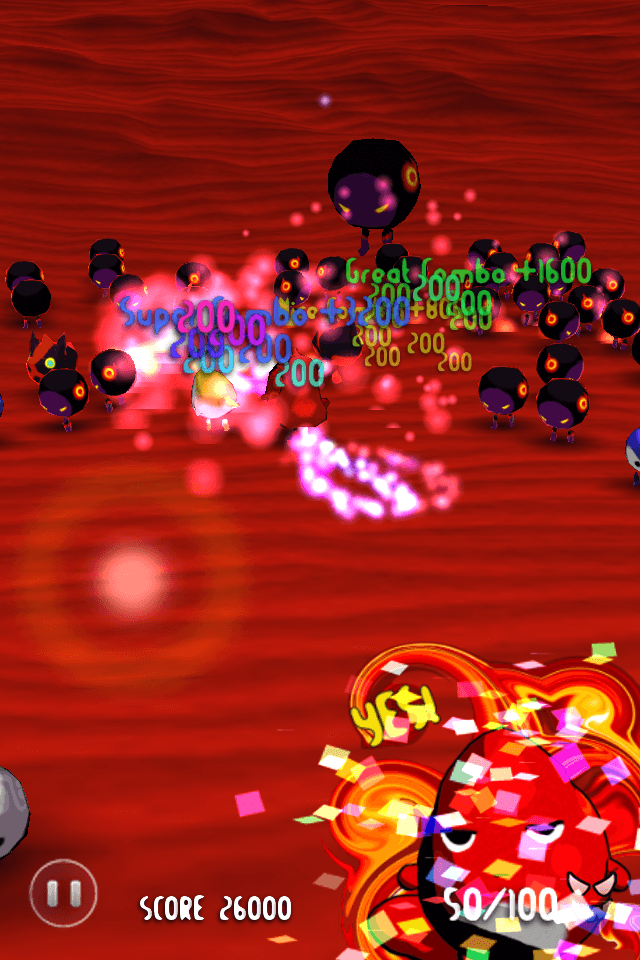 Your monsters automatically eat little pellets of food on the ground, which provide them with energy.  If they take too much damage, they will yell for help and simply picking them up will heal them.  If you are carrying a monster and an enemy hits you, you will live on as the monster attached to you kills the enemy.  But, one single enemy attack can also kill KOTOMON if he is unprotected, which makes the game pretty hardcore for an iOS title. If your into that, more power to you.

There is only one single, solitary aspect of the gameplay that is really annoying all the time.  The monsters are supposed to follow you. However, most of the time they lag so far behind that you have to go back and get them to follow or they start crying for help. They love to wander off into lava fields and kill themselves. This can make some levels agonizing.  Luckily and thankfully, the developers have already submitted an update to the App Store that will fix this issue.

One problem with the game that occasionally crops up is the controls.  While I love that the screen is not cluttered with buttons, and that the controls are just simple and sleek, this can also present several problems.  Turning around accurately, or firing rapidly, is virtually impossible.  You really have to take your time  and move deliberately in many levels because the controls can be very inaccurate.

The developers have told us:

“We have received quite a lot of frustrated feedback that our monsters fall off into the lava so easily. The game is intended to be quite hardcore with a cute attitude but our monsters slip too much, So, over the last couple of days, we have educated our monsters that lava is dangerous. In the next update, they will be a little more careful of the lava and not rush into it themselves. Other small tuning is also planned to ensure that our customers enjoy the world of Kotomon.”

Therefore, the above issues will be addressed shortly. So, most of the problems mentioned will hopefully be gone by the time this review is being read by you.  Nevertheless, these issues currently tarnish the fun in KOTOMON. 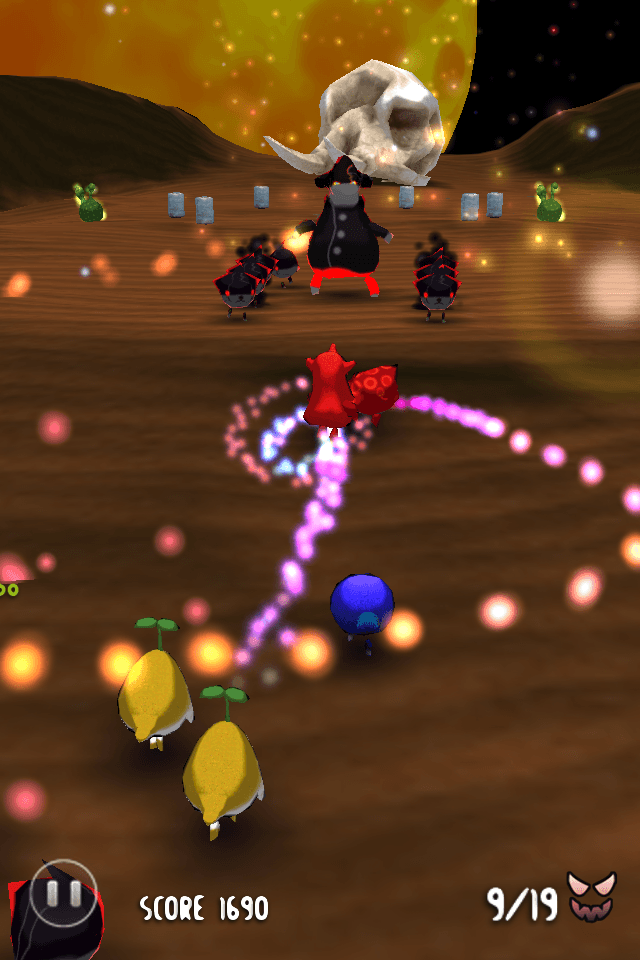 Audio and Visuals
As previously stated, KOTOMON has a unique audio element that really enhances the gameplay.  This is one iOS title that sounds terrific in the audio department, and I have absolutely no complaints with it.  All the sound effects and music are of the utmost quality.

On the other hand, the visuals in the game are on the low end of the spectrum.  The lack of detail in many levels is astonishing, and most of the worlds are pretty lifeless, with just plain grey, lifeless brown or flat green colors occupying a lot of the scenery.  While the monsters and enemies do brighten things up a bit, it is still a little boring visually.  Nonetheless, I really appreciated that the enemy variety in the game is fantastic.  There are just as many unique enemies in the game as there are unique monsters.   In addition, it seems like each monster is better at taking down certain enemies than others, which enhances the gameplay a lot.

Overall
In conclusion, I would absolutely recommend this game to all iOS owners. The developers have been actively listening to feedback and fixing the small issues that have arisen. Although KOTOMON is already awesome, once those issues have been fixed, this game will be one of the best on the App Store.