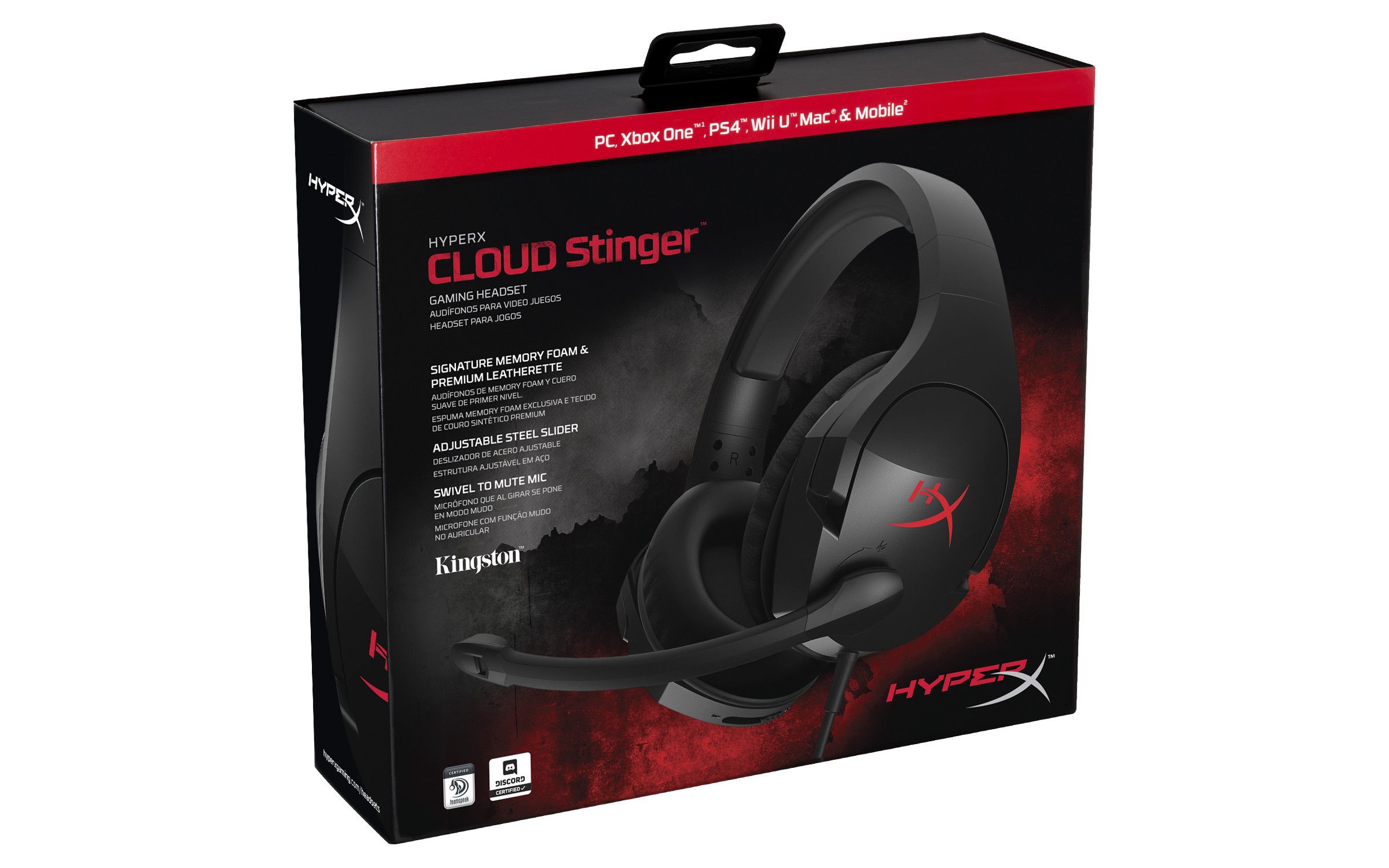 Kingston is one of several PC hardware manufacturers that have made a jump for the PC peripheral market in the past several years. Their HyperX line focuses strictly on mouse pads, headsets, SSDs, and RAM designed for gamers. Kingston’s latest release is the HyperX Cloud Stinger Gaming Headset. They are making a daring claim that the new budget headset is the best gaming headset for under $50 dollars USD. While the HyperX Cloud Stinger is not Kingston’s first stab at the budget market, it is definitely their cheapest priced effort so far.

Carrying an MSRP of $49.99 USD, the Kingston HyperX Cloud Stinger is at the same price as many of their big name competitor’s entry level headsets, give or take ten dollars. The headset is packed in a plain black box with a slip on cover. The box lid hinges open to reveal the headset packed securely in place with the rotating ear cups laid flat. While no one expects an Apple-like experience with the packaging at the Cloud Stinger’s price point, the lid is a nice way to make the experience feel a little more expensive than a plain old plastic container that slides out of the box. 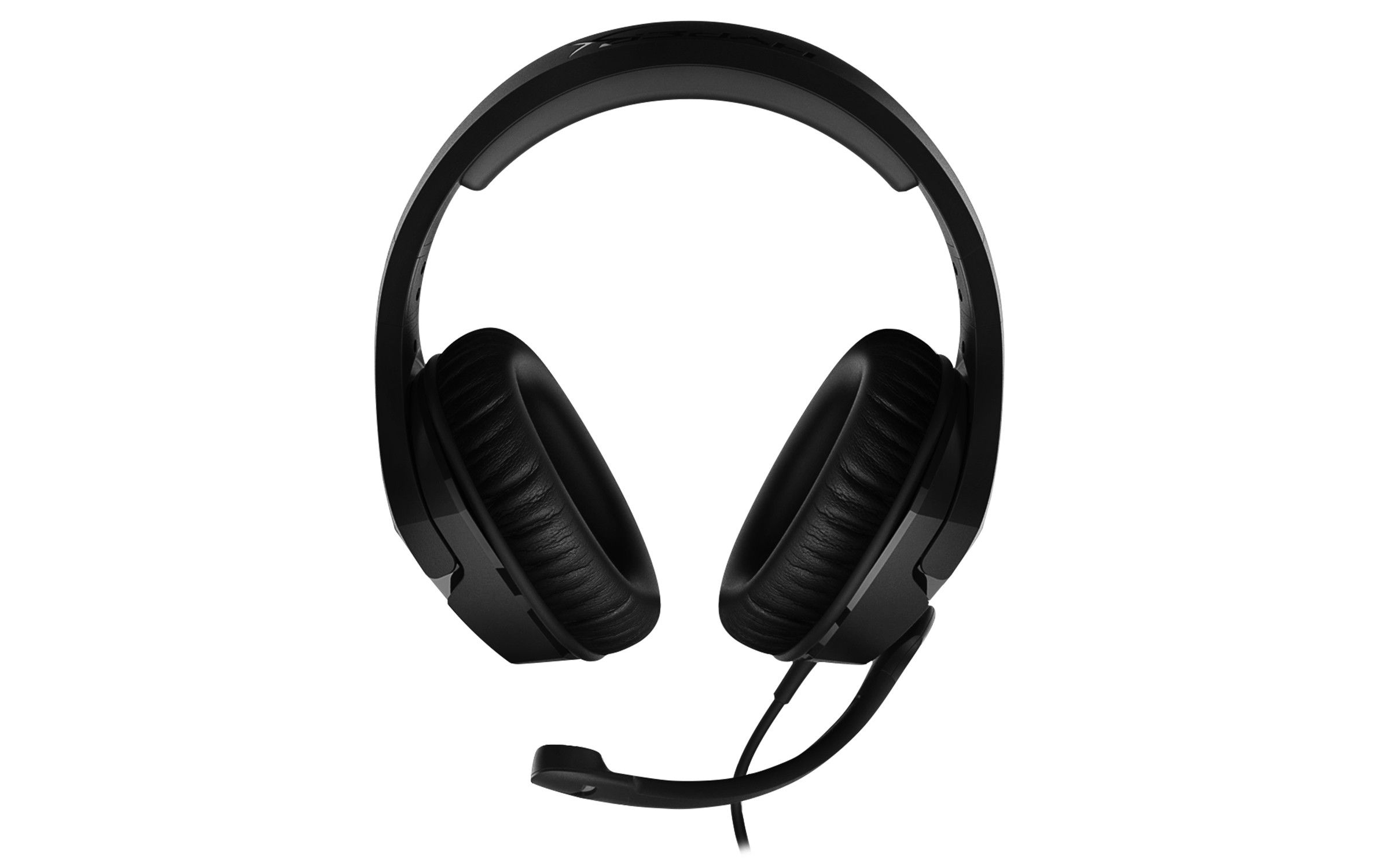 The Kingston HyperX Cloud Stinger is a light weight headset clocking in at only 275 grams. It is the lightest weight headset on the HyperX line. The headset is mostly plastic, though the sliders for size adjustments are made out of steel. The ear cups and the headband use the memory foam Kingston uses for all their headsets. The ear cups are made out of artificial leather and can swivel 90 degrees for flat storage. The cable is 1.3m long, which is enough to reach most laptops and mobile devices without being too unwieldy. The cable terminates in a 4 pole TRRS plug, which allows both input and output with almost all mobile devices (save for the headphone jack-free iPhone 7), console controllers, and some laptops. For those needing separate 3.5mm TRS plugs, an extra extension cable that is 1.7m long is included with the package. The total 3m length is definitely long enough to reach even the furthest PC tower. The microphone is a unidirectional boom type microphone that automatically mutes when swivelled out of the way. Since the microphone automatically mutes itself, there is no need for an in-line control unit. Instead, the volume is controlled with a slider located on the bottom of the right ear cup.

The headset is one of the most comfortable headsets I have reviewed to date. I had no problems wearing the Kingston HyperX Cloud Stinger for hours on end thanks to the light weight and the soft memory foam. With a hat size of 7 3/4″ or L-XL, I have a pretty large head. I found the clamp force to be very slight, so the headset fits a little on the loose size. The sizing was perfect for me on the smallest slider setting. This may be a problem for people who are on the opposite end of the head size spectrum, as I suspect the headset may not fit nearly as well. I am not the biggest fan of leather ear cups, real or artificial, as it tends to get pretty sweaty for long listening sessions especially when combined with memory foam. Since the fit is on the loose side, there is a little bit of air circulation, which helps keep things cool and dry after several hours of wear. 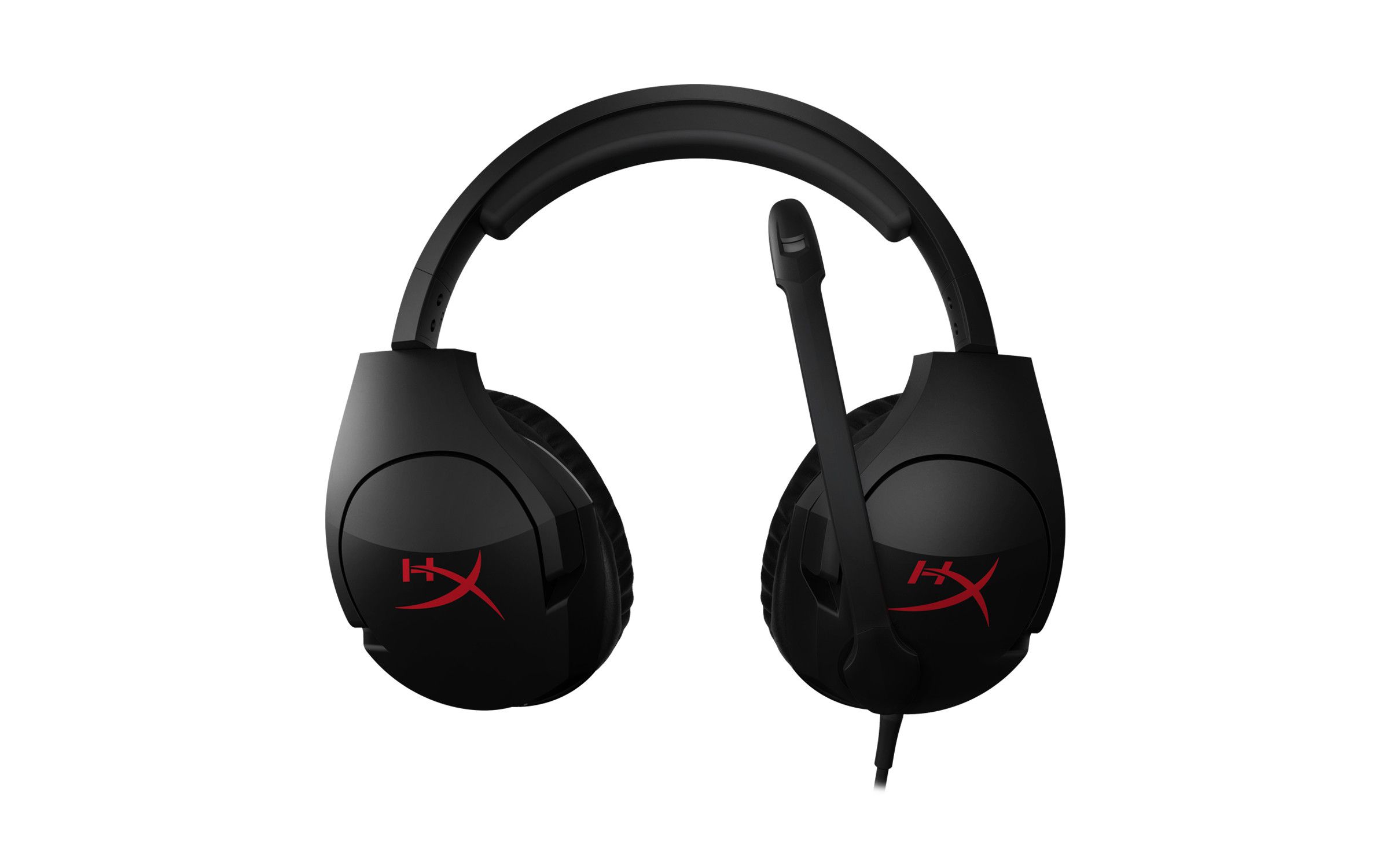 The Kingston HyperX Cloud Stinger features closed ear cups. The sound isolation isn’t great due to the low clamp force, but is still better than true open ear cups. The headset uses a pair of 50mm neodymium drivers. The bass is crisp and on the restrained side. It is by no means thin, but it isn’t the usual bass heavy bloat that plagues a lot of low end gaming headsets. The treble is pleasant and clear. The mids are likely the weakest part of the Cloud Stinger’s sound. I found the mids are a bit recessed and a little on the muddy side. While I wouldn’t use the HyperX Cloud Stinger only for music, it really shines as a gaming headset. It’s not quite the same as using a pair of open headphones, but the soundstage is easily approaching that territory. I had no problem pinpointing the direction of sounds in Overwatch when paired with a virtual surround sound processor like Dolby Atmos or Creative SBX Pro Studio Surround. Considering that the headset costs only $50 dollars, the sound quality is very good. I have definitely heard gaming headsets twice the price with inferior audio quality. The Kingston HyperX Cloud Stinger is clearly designed for gaming with its clear treble and crisp bass. 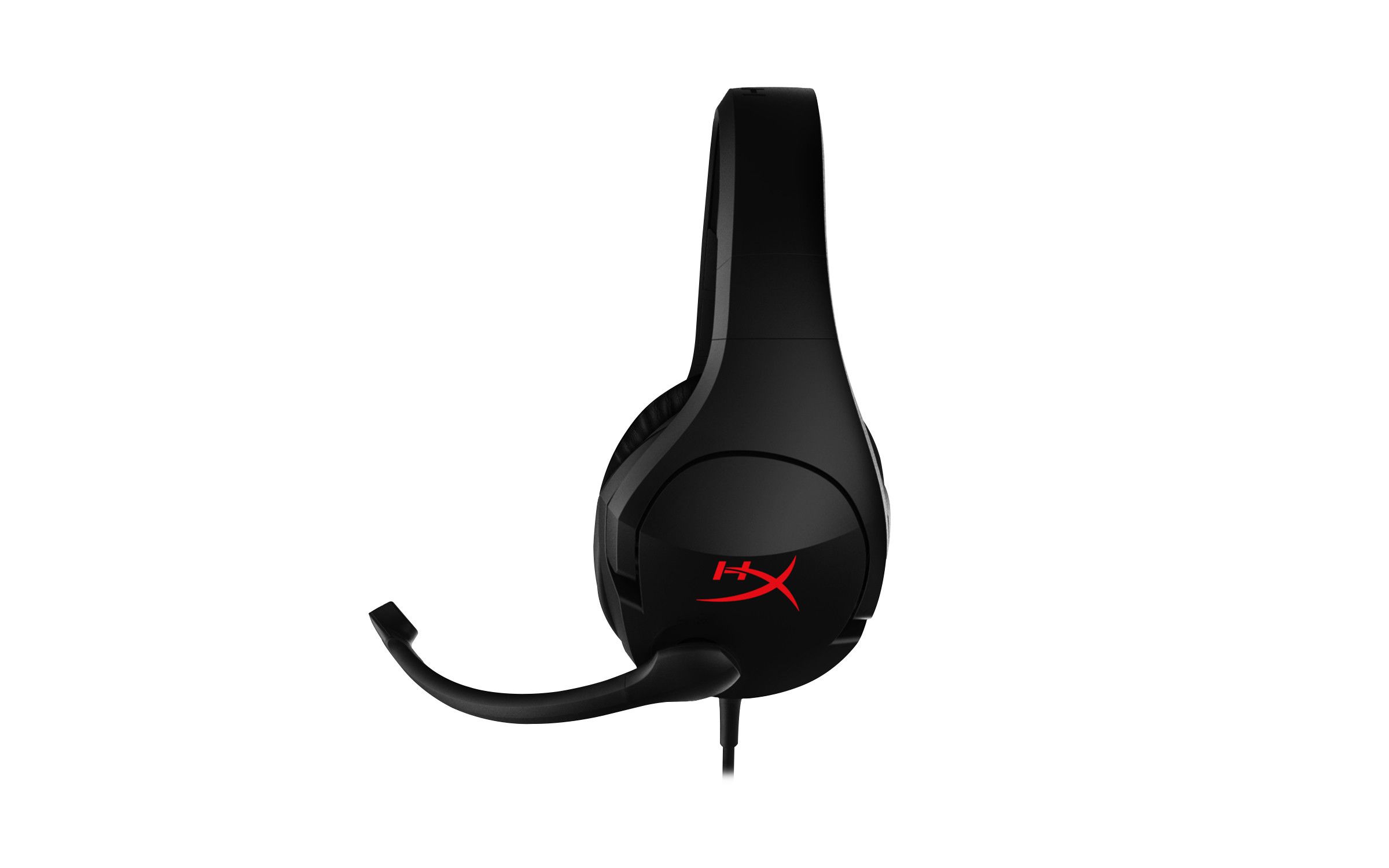 The unidirectional microphone works well. The recording quality is clear enough for voice chat, though it definitely needs to be at max volume and boosted to be usable on a PC. If you want to hear how the microphone sounds without any editing, I highly recommend listening to the beginning of the video review.

I like the control scheme used for the headset. Keeping all of the controls on the headset itself keeps the potential snag points on the cable to a minimum, which is ideal for those who plan on using the headset with a console or a mobile device. I really like headsets that automatically mute the microphone when the boom is pushed out of the way. I think it is one of the most natural and foolproof methods of muting a microphone, instead of having to worry about sliding a switch. Volume is controlled with a slider on the bottom right of the ear cup. Push the slider to the back of the headset for higher volume and forward for lower. There are slight indents in the slider, but it does no provide a very pronounce feel when sliding the toggle back and forth. 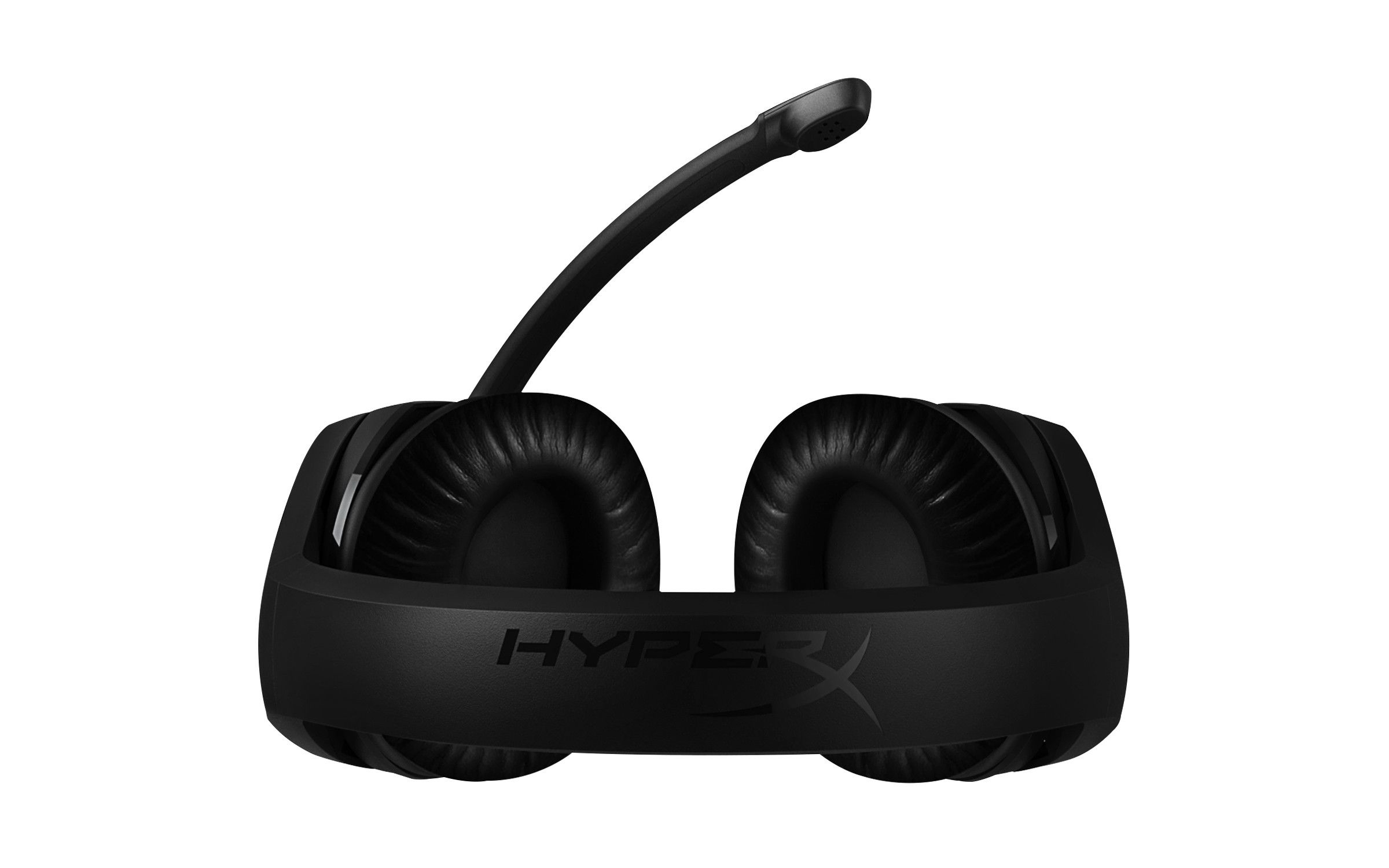 Kingston set a very high bar for themselves when choosing to build the HyperX Cloud Stinger’s marketing around the claim that it is the best headset under $50 USD. It is the best gaming headset under $50 USD I have used in recent memory. The gaming performance is excellent for the price, though it isn’t the best choice for listening to music. Although it might be a bit too big for those with very small heads, the headset is incredibly comfortable to wear, especially for long periods of time. Kingston has upped the ante in the entry level segment of the gaming headset market with the HyperX Cloud Stinger.

An excellent bang for the buck headset, the Kingston HyperX Cloud Stinger may be the new king of the entry level market.
8.5