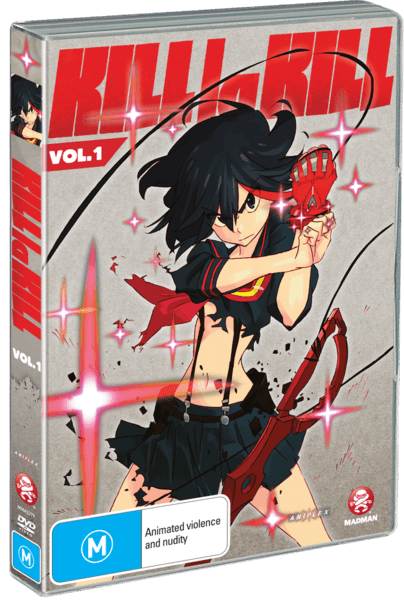 Dozens of anime series are produced each year; some are original works, while the majority are adapted from a variety of sources, typically Japanese light novels, manga, visual novels or other Japanese games. From the long list of anime works produced each year, many fall into the category of ‘mediocre,’ many are regarded as average, some are good but have wasted potential and then there are those that are considered to be worth watching. Where do the first four episodes of Kill la Kill sit amongst its fellow 2013 anime productions?

Honnouji Academy is a high school ruled by the Student Council and its president, Satsuki Kiryuin. Her faithful servants, the Elite Four, wear Goku Uniforms, as do those whom Satsuki otherwise deems worthy. The majority of the Goku Uniforms are one-star or two-star, and each Goku Uniform has special powers that can increase the physical capacity of anyone who wears it. 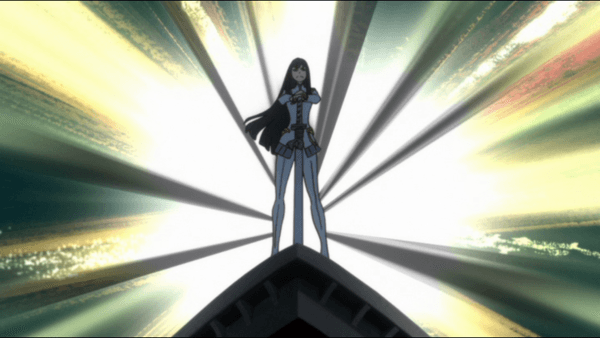 Ryuko Matoi transfers into Honnouji Academy one day and almost immediately has a run-in with Satsuki, who appears to know more about Ryuko’s scissor blade than she is willing to let on. Initially no match for Satsuki, she is forced into wearing a Kamui, a sentient sailor uniform that somehow gives Ryuko power by draining her blood. It provides Ryuko with an immense power that helps her defeat her enemies, somehow obliterating their clothing in the process, and protect her new friend Mako Mankanshoku. Upon learning the secrets of her Kamui, named ‘Senketsu,’ or ‘Fresh Blood,’ she faces Satsuki once again in order to find out who killed her father and left behind the scissor blade. 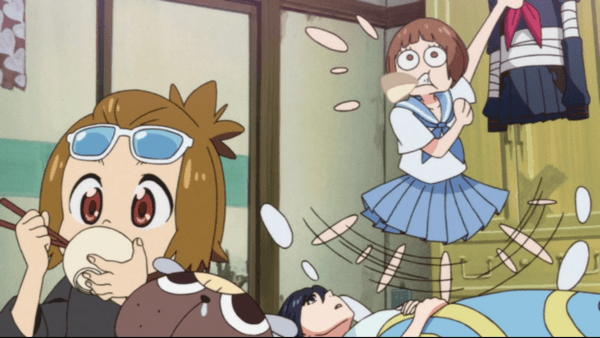 Although this may seem like a simple story of revenge, Kill la Kill is everything but simple. The people in Ryuko’s life are not only abnormal, but downright crazy. Mako is a hyper-energetic person who can withstand an onslaught of tennis balls hitting her at super-fast speeds and can generally defy the laws of physics and reality in general along with the rest of her family. Ryuko’s homeroom teacher is also strange, but with him it is because he likes acting in a ‘sexy’ way by stripping his clothes off in front of Ryuko, all in the privacy of his own home. If there is one thing that is clear so far, it is that there is clearly no law enforcement agency outside of the Student Council, because a teacher taking their clothes off like that is a serious cause for concern.

Trigger has done an excellent job animating this series. The character designs are unique and easy to tell apart. Furthermore, Ryuko is visually portrayed as having realistic emotions. While the way in which a character contorts their face when angry in most anime productions looks odd and is nearly always the same, Ryuko is drawn to look genuinely angry. When she is annoyed at something, her anger seems real. When she is happy about something, it is obvious that she is genuinely happy, and those rare moments of happiness help demonstrate that she is at least a somewhat well-rounded character, not just a one-dimensional being with a one-tracked mind for revenge.

The action is extremely fast-paced and fluid. For example, a group of students fall into a vat of boiling oil and then climb out and scramble away all in the span of just a few short seconds, only to be immediately forgotten as a fight scene is about to take place. Viewers who enjoy fast-paced series and nonsensical action will find plenty to enjoy about this seemingly insane series. 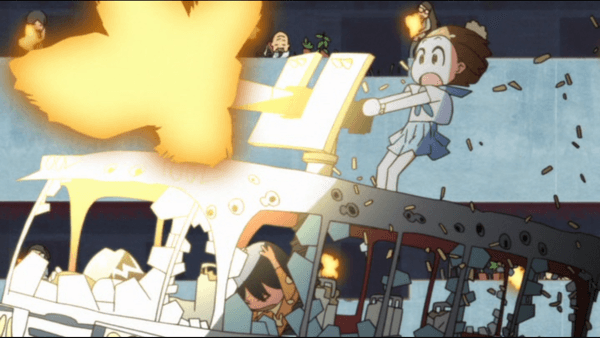 One thing that may bother some viewers is the ‘fan-service’ present in each episode. There are some scenes where boys are shown naked in a non-sexually humiliating way, but while there are no depictions of genitals or female nipples so far, many characters are sexually objectified on multiple occasions. This results in many scenes featuring men nosebleeding so much that they should be dead from excessive blood loss and in scenes where Mako decides that Ryuko must be an exhibitionist. The transformation sequence, for example, features whichever girl is putting on a Kamui completely naked while their breasts are defying gravity, just like how everything else in the series defies gravity and any commonsense whatsoever. When the Kamui is active, it only barely covers up the wearer’s breasts, genital region and behind. To make it worse, girls tend to end up in positions where men can get a clear look at the their almost entirely naked bodies. Anyone who has a problem with the sexual objectification of women is recommended to look elsewhere for something decent to watch. 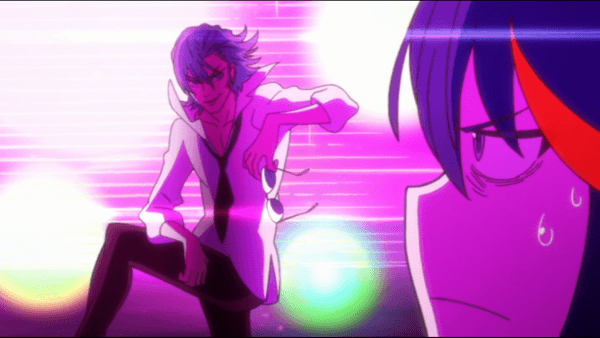 The original on-screen Japanese text is completely retained. No English credits are included in Madman’s release, which is typical but perhaps disappointing for those wanting to find out who voiced a certain character. The subtitles are mostly perfect, but at least one typing error is present and very noticeable.

The music throughout these four episodes is fantastic and leaves nothing to be desired. The opening theme song is a rock song and the ending theme song is a rather catchy pop-song. The lyrics are the typical type that come from the main character’s thoughts interspersed with random messages that may or may not actually be relevant to anything. The background music, from composer Hiroyuki Sawano, is well-suited to both the action scenes and the scenes of pure randomness and insanity.

The English dub is great. The voices are very well suited to their roles; emotions are portrayed in a realistic manner and the dub script stays true to the original for the most part. However, a few additions of western phrases are made in order to help the dub make more sense to western viewers. 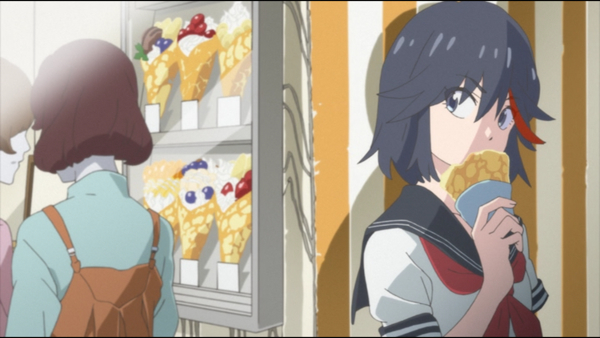 The first four episodes of Kill la Kill sit in the category of ‘good’ original anime productions. The action, the plot, the characters, the music and the animation all come together to make a great action series that is incomparable to any of the more normal anime series produced in 2013. If this is what can happen when some people sit down and decide to make an original anime series, then we may be in good hands. With any luck, the next five episodes will treat its female characters with the dignity and respect they deserve.

Author’s Note: The original score attached to this review has been revised by the author.