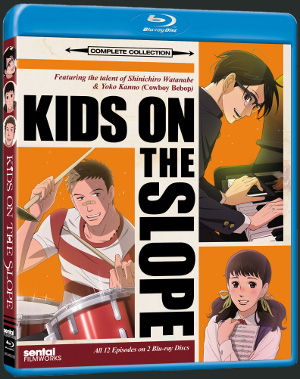 Overview
Shinichiro Watanabe and Yoko Kanno working together again is almost any anime fans dream come true. With Cowboy Bebop, the duo was able to create an anime that had a lasting impact and is still held by some as one of the best animes around. With the two joining forces for Kids on the Slope, is it lightening in a bottle again? Or a solid attempt simply carried by the names of its creators? Having aired last year, Kids on the Slope has finally come to Blu-ray to see how what it holds for anime fans. 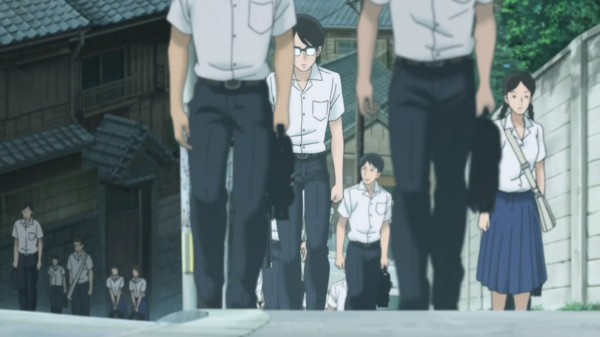 Story
Kids on the Slope is the tale of 2 Japanese school boys in 1966, which being a very different time than today allows the story to excel in part because of its slice of life style in a less heard from time period. However, this is not an entirely slice of life kind of show, but more a character driven drama that happens to include these tidbits of 1960’s Japan. Beginning with Kaoru having just arrived at a new school because of his father’s naval career, he is introduced to a brash troublemaker named Sentaro from a need to go to the school’s roof to recenter and calm himself.

From this initial meeting, both boys become close acquaintances to closer friends all thanks to Kaoru being a pianist, Sentaro being a drummer, and the overwhelming power of Jazz. While about the boys mainly there are plenty of other characters around, from love triangler Ritsuko, to love pentagoner Brother Jun and Yurika. Even smaller characters prove to become unexpected more important later. The characters involved are as as varied as real life and what gives the anime such heart, but even more than the characters, the story is about Jazz. 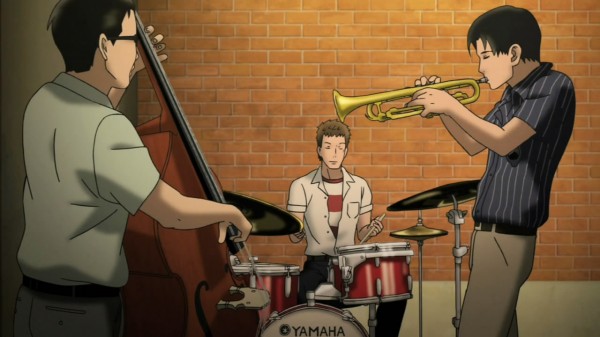 From the title of each episode, to the main bond between the lead characters, Kids on the Slope is as much about Jazz as it is about the 2 main characters Kaoru and Sentaro. This anime is as close to the personification of Jazz as anything else I’ve seen. The point of Jazz is to feel the music, to just let it flow and come alive. The performance will not and cannot be perfect, but will be unique every single time. The story here is the same way, not forward and clear cut, but meandering, sweeping, and personal. Not every part of the story fits with a neat ribbon, but like solos in a Jazz piece, colors the entire experience. Jazz is about expressing the blues just as much as joy and having fun, so too does the story. 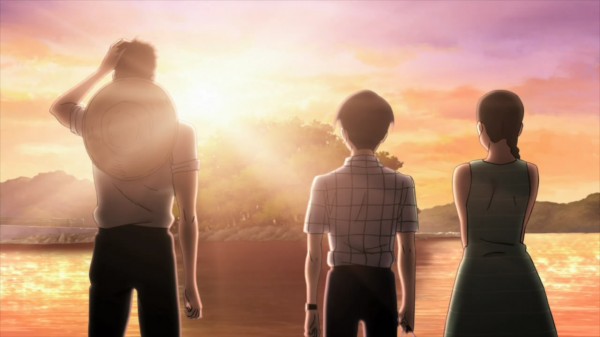 The character designs are also very well done, while some anime might have characters that are fairly static, almost all of the characters in Kids on the Slope see some sort of growth. The time period also makes for the characters to look uniquely realistic. Drawing on the actual period, all of them look and feel like they would and could have existed. Though probably the best designs in the series, outside of Sentaro in general as he’s just an amazingly designed character, are the Beatles-esque costumes during one of the school festivals because they not only add to the general charm, but highlight what was going on in music elsewhere in the world at the time.

Audio
The voice actors do a fine job of fitting their parts, the over the top characters are suitably over the top and the serious do a fine enough job at serious. For the most part however the voice acting isn’t all that much to write on about, it’s standard even the English dub meets the quality of the original Japanese. But, while it is true that for the most part there isn’t much to comment on, there is one stand out moment in the voice acting. The instance of Ritsuko singing may not be stand out in the original Japanese, it does stand out far more in the English dub because they use the original Japanese. This is something that I can’t recall happening in another anime, using the original singing, but here it makes perfect sense as an anime set in Japan and featuring a Japanese school girl actually trying to sign an English song phonetically. Which here, feels like the perfect way to do this scene. 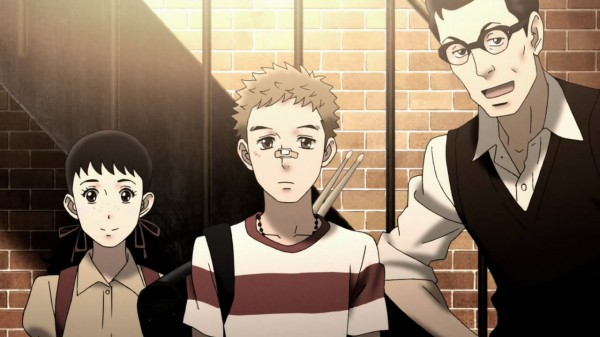 The music of the series is truly Jazz-tastic and even the music that isn’t Jazz is still perfect for the anime. As each episode is titled after a song, it isn’t surprising that these songs are incorporated into the show, but how well they do is still impressive. Specific songs become themes for both characters and situations and are revisited, both calling back to what the characters have gone through and how they interact. The Jazz performances will utilize and flow through different songs as well unique aspects capturing the essence of how Jazz is actually performed. While neither the opening or ending theme are Jazz themselves they still fit. The opening theme “Sakamichi no Melody” by YUKI itself encapsulates Jazz with incorporating Jazz songs in its lyrics, while still playing on the anime’s themes of how friendship can change and shape someone. The ending theme “Altair” by Motohiro Hata contains the same themes, while also including themes of missed opportunities.

Extras
The special features included are sure to please an anime fan, with more than just previews and the clean opening and ending. This release also has some of the Japanese previews for the series before it started airing, but the real gems are the three interviews. With interviews with director Shinichiro Watanabe, music creator Yoko Kanno, and the two performers that played the music of Kaoru and Sentaro. These interviews give a good look at the processes they used when creating the anime, from filming the musicians to recreate their exact movements, to how they found their performers. Anyone that enjoys behind the scenes and seeing how things are done are sure to appreciate these extras. 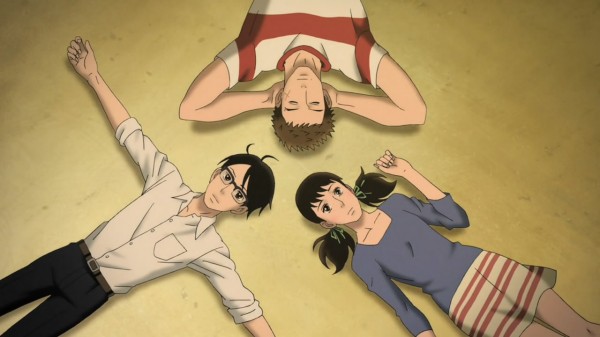 Overall
Capturing all the feelings, music, and depth found in Jazz and pairing it the the lives of two that find it imperative to themselves. The story does drift in places, but like real life and memories features those things that will stick with a person, as some of the asides with Brother Jun don’t fit well, but they definitely aren’t soon forgotten. And the music? What more needs to be said about the music? It colors and shades the events exactly as they should be. Kids on the Slope isn’t just a great anime series, it is an amazing visual Jazz performance worth almost anyone’s time.