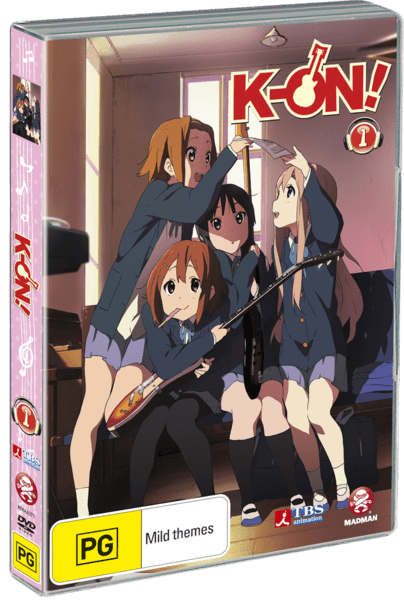 Overview:
Music is a magical thing. It can bring people together and it can also tear them apart. K-ON! leans more towards the former. It tells to story of a small group of girls being brought together by music. It’s a common story, but a good one and K-ON! takes the concept for a joy ride. With cutesy characters and a story told with pure glee, K-ON! makes for simple fun with a warm gooey heart at it’s core. 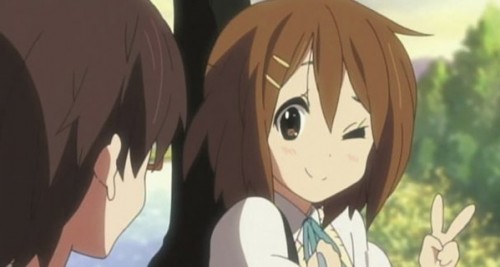 Story:
As previously stated K-ON! tells the story of a group of girls brought together by music. The key point however is that it’s not simply of a love of music, it’s of the fact that they want something to belong to. School has just begun and everyone is sectioning off into their individual clubs, leaving our lovely cast of girls desperately searching for a place to call their own. Over the course of the first episode the girls haphazardly form the Light Music Club, never taking into account that one of their members can’t play an instrument and that the others aren’t even very good.

None of this matters to them though, they are looking for somewhere to belong. They do not want to be alone and that is the gooey centre of K-ON! The fact that these girls want to be part of something resonates with the viewer. Every human being, deep inside, has that sense of belonging and that is where K-ON! connects with the viewer. Although it doesn’t wear that message too clearly, it’s visible enough to sink into the minds of those watching.

With this being only the first 4 episodes of the series there is a lot of room for the series to grow into something greater. It certainly has the potential to become something huge and that possibility of growth is resoundingly clear. Only time will tell as Madman releases future volumes. 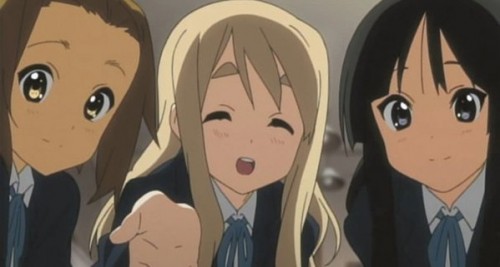 Characters:
K-ON! boasts a well rounded and cleverly concieved cast of characters. All of whom are cute and memorable by all counts. With the series having such a huge fandom, the images of these characters has made it’s way into anime fans psyches over the past few years and that is a testament to the characters iconic status.

It’s clear to see where that status came from when watching this volume as each character is surprisingly original and unique when compared to the plethora of cute anime girl characters that have flooded the market. These characters all bounce off one another so perfectly it is almost a magic feeling at how well developed they are.

Artwork:
The series artwork is put simply brilliant. It achieves everything it sets out to do without fail. The character designs are expertly crafted, with each character looking so cute it is hard to note feel warm inside when looking at these plush-like girls.

The backgrounds are likewise well made and incredibly well defined and detailed for a series of this genre. Let’s not forget the instruments, which as simply astonishing to look at. So much fine detail was placed into them in an attempt to recreate real life music kits. I found myself oggling these music makers with delight, they look that good.

Another great part of this series was it’s fluid animation which brought the girls to life. For a series with little action, there was a lot of motion when it came to these girls movements. Whether it be Yui falling over something due to her usual clumsy behaviour or watching the girls bop about whilst belting out some tunes, the animation was rock solid. 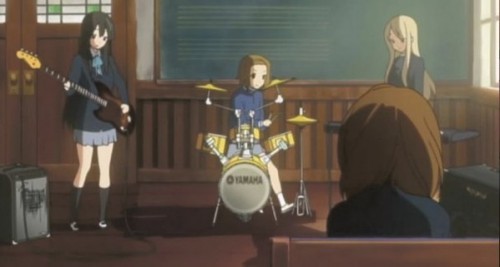 Audio:
For an anime series about music, this section can mean life or death. Thankfully K-ON! lives on with an amazing soundtrack with tracks that will reverberate throughout your entire body making their way up into your head and make themselves at home for the next few days. It is catchy music at it’s best, without a doubt.

The opening and ending tracks are also extremely well done and suit the series to a tee. Both of which are also catchy ear candy that you will certainly find yourself humming long after putting away your DVD. I know I did.

Let’s not forget the voice work which is brilliant on both audio tracks. But for this review I will be commenting on the English track. Which was a great job, with stand out performances from Stephanie Sheh, known for her role as similarly daft girl Orihime Inoue from Bleach. She perfectly encapsulated Yui Hirasawa’s clumsy personality without fail. Overall it was a brilliant job by the audio department.

Special Features:
Madman has done a really good job here. We have on disc a great interview with the voice of Yui Hirasawa, Stephanie Sheh who I previously mentioned as doing a good job with her character. However other than this interview there is little else besides trailers for upcoming releases. But for a 4 episode volume release, there is no reason to complain when you get an interview with the voice of the protagonist.

There is also a very nice reversible cover of the girls standing istruments in hand over a nice blue background. So overall it is a great job from Madman as usual. 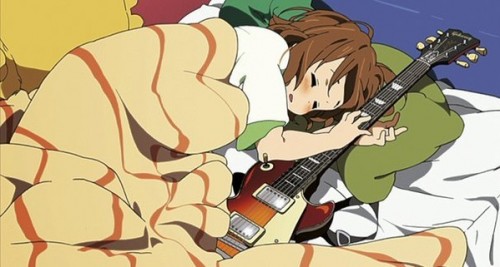 Conclusion:
In closing, K-ON! volume 1, is an amazing piece of anime, with a deeper message than most slice-of-life series could ever hope for. The series has already gained such a huge fandom and I believe it is largely due to the message and heart of this series. That message is, if you don’t belong, there are others out there in the same boat, looking for somewhere to call home. You are not alone. That is what is at the heart of K-ON! and that is why K-ON! will be remembered. Not because it’s cute, not because it’s fun, because it has heart.