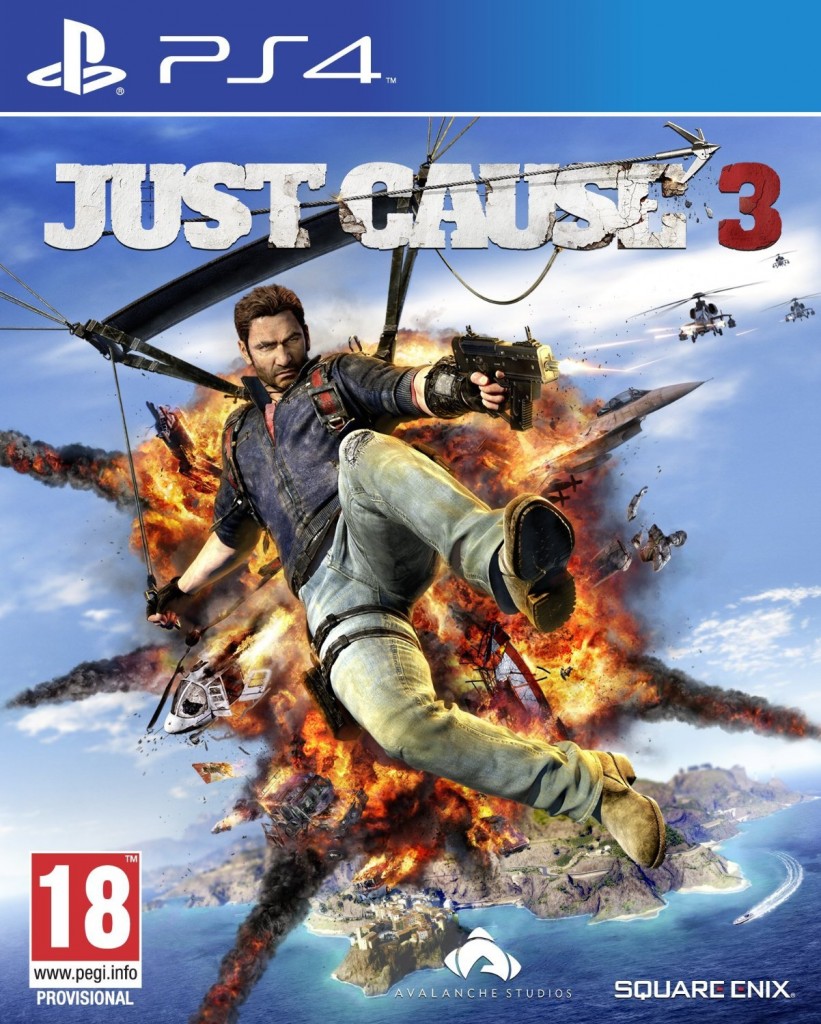 It has been several years since Rico Rodriguez, the dictator disposal specialist, parted ways with The Agency. Now Rico is putting back on his parachute and returning home to the Mediterranean island of Medici to put his skills to good use. General Di Ravello has ruled the country with an iron fist that would make a South American dictator proud. Armed with an improved grappling hook and a new wingsuit, Rico is ready to destroy Di Ravello’s strongholds and take him down. 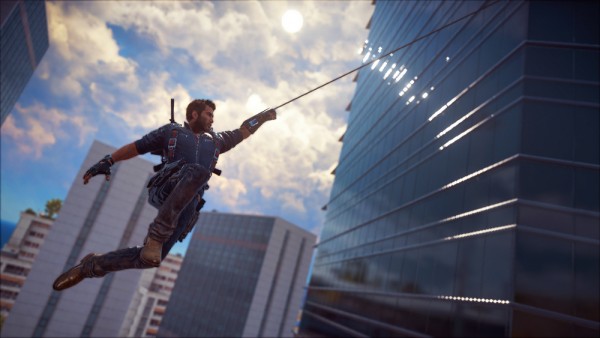 Rico is bringing his many skills he’s learned while working for The Agency home in hopes of setting Medici free. Reunited with his childhood friend Mario and his old mentor Sheldon, Rico plans on systematically blowing up General Di Ravello’s strongholds one by one to help support the rebellion. While previous games were more focused on the island, Just Cause 3 spends a little more time focusing on Rico as a character and the relationships he has developed over his lifetime. 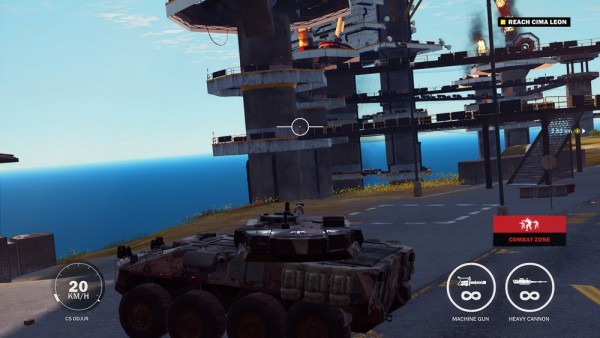 Just Cause 3 plays out like an explosive summer action flick. Avalanche Studios shows quite a bit of self-awareness on how over the top and ridiculous the whole premise of Rico’s skillset is and has created a plot to match. They have taken the classic American action hero and have gone a step further, with Rico riding missiles and generally blowing up nearly everything in sight. While the plot won’t win any Oscars anytime soon, Just Cause 3’s quirky cast of characters will likely win your heart. Like Rico, many characters fill in a standard action movie role, but almost all have some twist to them that makes them incredibly endearing and likable. The writing is top notch for the most part, though some of the lines for the civilian populace are a bit odd. For example, when Rico pulls a civilian out of a car to “liberate” it for the rebellion, it is rare for the civilian to express any outrage. Instead, gamers are met with comments like “careful, it sticks on 2nd.” 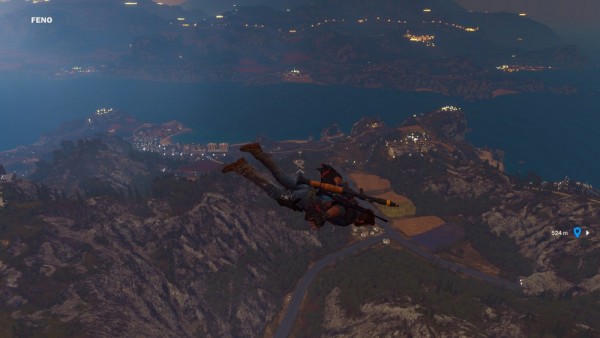 Just Cause 3 is an open world action game that build on the series’ signature grappling hook/parachute combo with the new wingsuit. The nation of Medici is actually composed of a main island with two smaller islands and a series of tiny rock outcroppings. The islands are split into provinces, each composed with military bases, military bases, and oppressed towns. To liberate the provinces and kick Di Ravello out, Rico will need to systematically destroy Di Ravello’s military hardware. Of course, as Rico wreaks more havoc, the alert level steadily rises and more powerful enemies are hurled in his direction. The rest of the game is all pretty standard open world fare. There are tons of collectibles scattered across the world to collect, challenges to complete, vehicles to ride around in, and missions to complete. 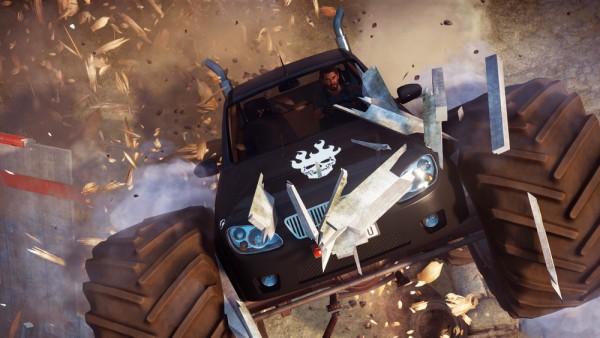 Rico starts out with a pretty basic arsenal. The first three slots are for weapons and the fourth weapon slot is an unlimited supply of Bavarium powered explosive charges. Rico is able to use flares to fast travel around the map or call in supply drops, but they are limited in number and must be replenished. As military bases are conquered and collectables are found, more special weapons are unlocked. For every challenge the player completes, they are awarded up to five gears based on their performance. The gears go into a pool that unlocks mods for weapons and vehicles. These mods can turn the simple time based grenades into more complex behemoths or provide a better zoom on weapons. The mods can be enabled or disabled instantly at will, which encourages players to experiment. The mod system is a great way to give players a chance to equip themselves based on their personal play style without overloading the game with too many weapons and equipment serving very specific niches. 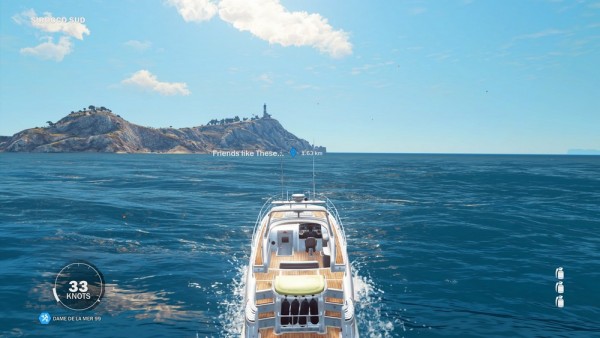 Just Cause 3’s movement system is excellent. Rico switches between the grappling hook, the parachute, and the wingsuit smoothly. It is incredibly easy to zip around the map, blazing away with weapons one second then grappling onto a helicopter and hijacking it the next. The fact that Rico handles so well is what makes it so jarring when things go wrong. The game sometimes has a bit of problems with shooting the grappling hook at high objects and some ledges. Sometimes Rico struggles to jump up onto the ledge, other times, the grappling hook hits the completely wrong area. The controls are extremely responsive on both controllers and mouse and keyboard combos. The mouse and keyboard struggles a bit with the wingsuit controls, as the wingsuit is much better suited for an analog stick versus the binary nature of movement keys. The PC controls are missing a separate slider for camera sensitivity in vehicles, as vehicle turrets seem to be set at half the sensitivity as the on foot camera. 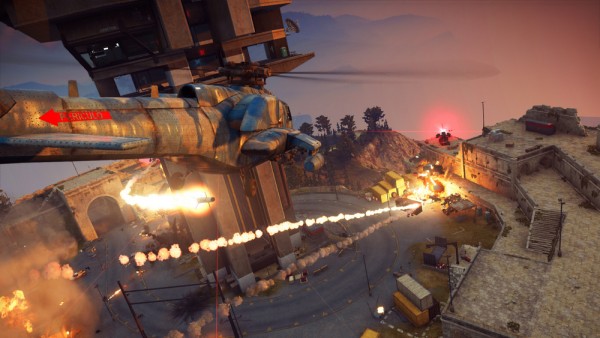 I had a blast with the story missions. Avalanche Studios has created some epic moments with the story missions that are really enjoyable. Things aren’t nearly as rosy outside the main storyline. Just Cause 3 suffers the same problems as most open world games these days, as it can get really repetitive. Play through some of the challenges, liberate the first island, find a few collectibles, and you have pretty much gotten the gist of the entire game.

Just Cause 3’s map is designed with the movement system in mind. There are plenty of high spots to leap off, making it easy to wingsuit around. The mountainous terrain also makes for interesting driving conditions, with plenty of winding roads to challenge high speed daredevils. The towns tend to look the same after a while, but the military bases provide some interesting layouts. 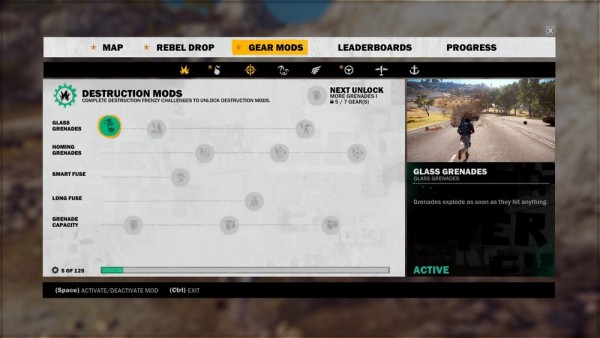 Medici is a beautiful Mediterranean island. The environment feels like it is torn out of a travel magazine with the shimmering seas and beautiful Italian style villages that dot the coastline. The world is colourful, vibrant, and very lively.

Just Cause 3 is a next-gen only game and clocks in with one of the highest minimum specs for PC games this year. Even at the lowest graphic settings on the PC, Just Cause 3 looks fantastic. The animations are incredible smooth, with Rico transitioning between the parachute, grappling hook, and wingsuit smoothly. The destruction in the game is procedurally generated and results in some visually impressive explosions that behave quite naturally. On the flip side, sometimes Rico’s ragdoll animations seems a little unnatural at times, especially when hit gently with slow moving vehicles. The game does struggle a little with some clipping in busy sea fights and some lag when loading demo videos during challenges, but otherwise delivers a solid technical performance. 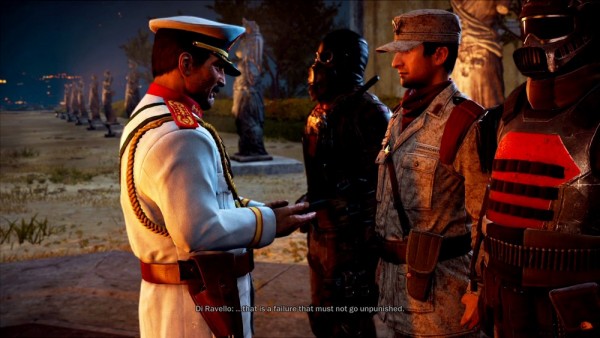 Just Cause 3 delivers an excellent audio experience. The sound effects are top notch and the voice acting is excellent. The music is excellent; I really love how the Spanish guitars kick in during combat, which suits Rico’s combat style nicely.

Just Cause 3 takes the best of the series and then brings it to the next level. The game’s high speed movement system is responsive and a pleasure to use. As expected of an AAA title, the audio/visual experience is solid. The game’s plot is worthy of a summer blockbuster and has a cast of loveable characters. Although Just Cause 3 can’t escape the repetitive nature that plagues many open world games these days, the game is still incredibly fun.