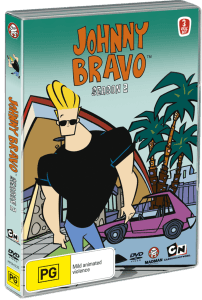 Oh, momma! Johnny is back for another season, and this time there’s three discs full of his pick-up lines, flexing, and his friends and family. While my review of the first season was not as favourable to the series as I expected it would be (you can have a read of it here), I’m not one to hold a grudge. I flicked on Johnny Bravo Season Two with a clean slate – no pre-conceived notions, no expectations, and no judgment…

…that is, until the first episode started.

Johnny Bravo. Back again. Three discs, 22 episodes, 66 segments. 506 minutes of “huh, ha, hiiiii-ya!” and “she digs me”. Suddenly, flashbacks of Johnny Bravo Season One came flooding back, and it was all too memorable as season two was playing before my eyes.

The story behind Johnny Bravo Season Two is largely the same as season one. Johnny lives in Aron City with his mother, has a sweet but annoying neighbour Suzy, a dorky best friend Carl (with occasional chimes from his father, Pop), and hits on way too many women. In this season, Bunny Bravo dates a sleazy South American man, Johnny tries to seduce a nun by doing good deeds, and – in a Willy Wonka-esque story – Johnny wins a trip to Jerky Town. 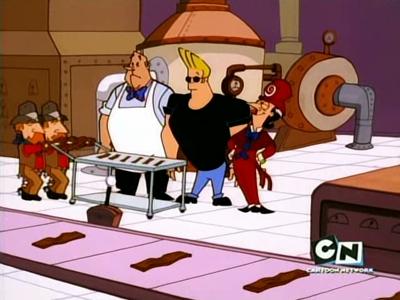 Cartoon Network is notorious for its animation series’ lacking continuity, and this season is no different with storylines jumping from place to place. Johnny proceeds to go on a number of escapades, and the second time around they are even more ludicrous than the first. While I enjoyed season one’s whiff of reality, season two blends urban realism with far too many aliens, cowboys, and just generally implausible stories. The basis of Johnny Bravo is an egotistical womanizer, but it seems the writers caught on to how repetitive it was and tried to inject a little more variety. Sadly though, their attempt is quite transparent and – while some episodes can be entertaining and redeem a few laughs from us – it really renders the narrative even more tiresome. The episodes no longer provided moments of enjoyment, but became a chore of watching the same people over, and over, and over again.

And on the note of overstaying one’s welcome, I have to ask: why does Johnny live with his mother? It’s slightly painful to think of a womanizer who comes home to his mummy every day and while I love a man who loves his mother, Johnny’s relationship borders on a Freudian nightmare.

If there is one aspect of continuity in the series, though, it is Johnny. He’s the prime example of a character that never undergoes development, and instead sings the same song every day. That’s completely understandable – from Cartoon Network’s point of view, Johnny’s character got the ratings up and received a positive response from kids, so why change it? In hindsight though, Johnny’s character becomes more and more repetitive as time goes on and I began to find him annoying, not funny. 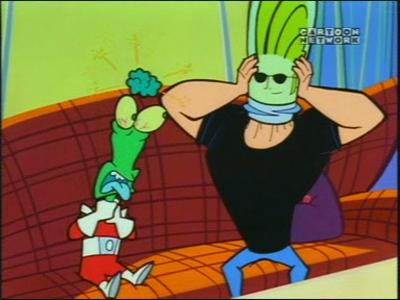 Bravo, still as dumb as ever.

Suzy and Carl remain very consistent, but Pops features a lot more in every episode and Bunny becomes more and more quirky as the series progresses. Pops goes from a kind man to a dodgy person you would hate to have serving you food (to liken him to a Nickelodeon character, he’s the Mr. Krabs of Johnny Bravo), and Bunny Bravo is no longer just the kind mother – instead, she begins to become the mother that embarrasses you, even though you know you love her. I’d have to say that the evolutions are neither positive nor negative; rather, they give the characters a sort of development that would be completely absent otherwise.

Visually, Johnny Bravo Season Two improves from the first season with a crisper, cleaner animation style. However, with it being Cartoon Network’s ‘golden age’ and all, there really isn’t much variance from the classic formula that served them well. I’m glad to say, though, that the world of Aron City seems a bit brighter and artistically there are definitely improvements from the first season. The artists explore their creative side a little more and inject visuals that only Johnny Bravo could have: the angular figures and the retro-fifties-Elvis style coloring all seem to play a bigger role than they do in the first season.

As for the audio, there are no noticeable changes. All the voice actors stay the same, but I’m beginning to wonder if perhaps every single girl is voiced by the same voice actress – way to add to the repetitiveness, huh? Jeff Bennett still does a great job as Johnny, and the Elvis side of him truly comes out more in the second season with his ever-increasing use of phrases like “Ooooh, momma!”.

This DVD does (finally) come with an extra: Johnny Bravo goes to Bollywood. In this episode, Johnny is based in India and finds a hair gel that is supposed to make all the women adore him. However, when everyone begins falling in love with him (men, elephants, and insects) Johnny discovers there is a problem and seeks to find a cure from the creator of the gel in Bollywood. 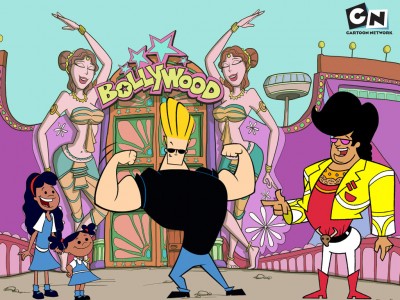 Johnny Bravo in another language. That’s…interesting?

The episode is politically incorrect, completely random, and dubbed completely in Indian with English subtitles, but that’s what makes it the most enjoyable aspect of the entire DVD. This episode finally pushes the boundaries Johnny Bravo never quite managed to do in its original episodes, and I’d have to say I was so pleasantly surprised by this. The animation style is also bolder and the Bollywood side of the episode really distinguishes it from other Cartoon Network productions, which was a delight to see. This extra was, perhaps, the best thing to come out of this DVD – and that’s saying something for a season with 66 segments over 3 discs.

While there were some slight character developments and there was a wonderful DVD extra, I felt too much of Johnny Bravo Season Two was the same as season one – and that, to me, is a massive fault. Animation series’ should show development throughout seasons, both of character and visual style, and the creators of Johnny Bravo failed to deliver. There were moments that were enjoyable, but overall the season was far too drawn out and exhausted for my liking. Johnny Bravo as a character is too much on his own, and three discs of Bravo is two discs too many.

I give Johnny Bravo Season Two