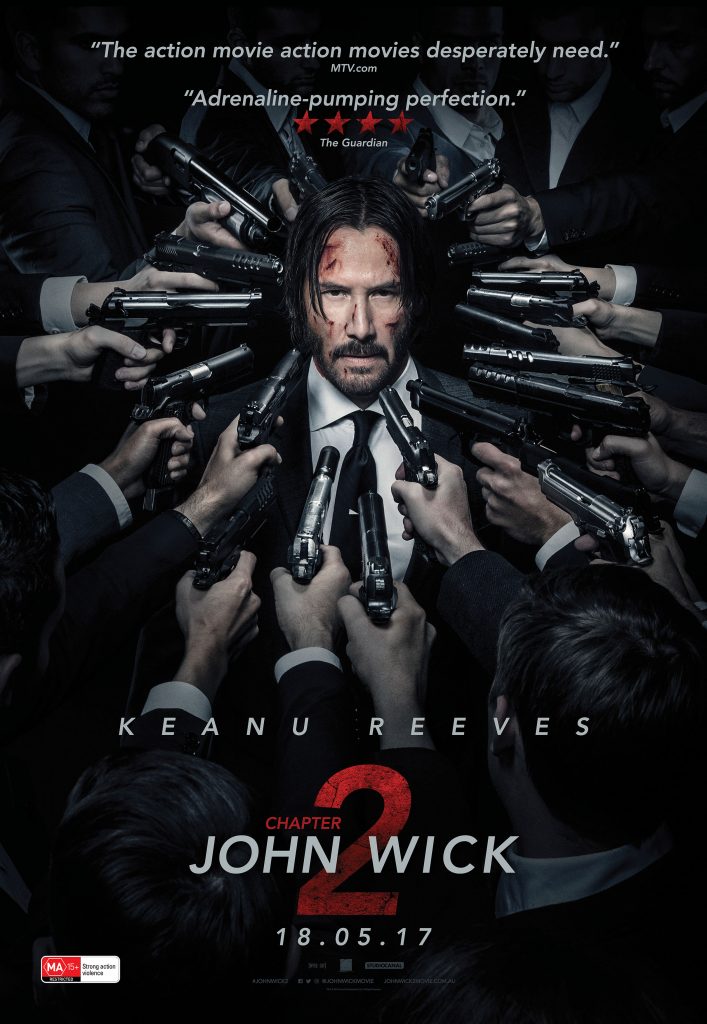 John Wick is an interesting case to examine for how a good film can be made out of an extremely simple premise. You’ve probably heard that the first film was about an uber assassin mowing his way through a veritable army of interchangeable goons which is, granted, a fairly stock standard premise for an action film. You’ve probably also heard that our character’s motivation for brutally taking the lives of so many people is essentially in retaliation for them killing his dog. It’s the sort of film which takes a ridiculous premise and runs with it to the extreme and it works. As I enjoyed the original, I looked forward to seeing what director (Chad Stahelski) and screenwriter (Derek Kolstad) come up with in the new instalment. 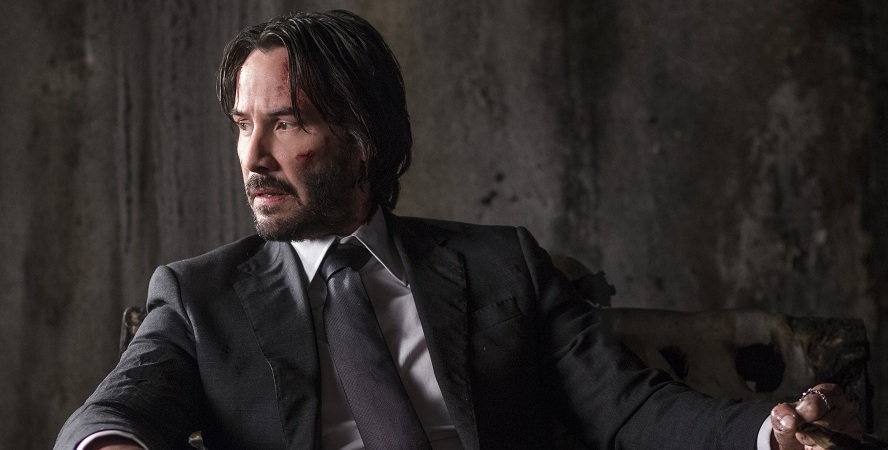 The film’s story takes place well after the events of the first film with the eponymous John Wick (Keanu Reeves) having completed his quest for revenge and getting his car back. His return to the violent underworld he purportedly retired from brings an old associate, Santino D’Antonio (Riccardo Scamarcio), comes out of the woodwork to call in a literal blood marker John owes him. Through the pressure of the marker (and blowing up John’s house for good measure), Santino is able to convince John to complete one final contract: D’Antonio’s sister, Gianna D’Antonio (Claudia Gerini), a powerful mob boss in her own right. Unfortunately, as has been the case for John ever since his wife died, this course of action turns out to have terrible repercussions for pretty much everyone involved. 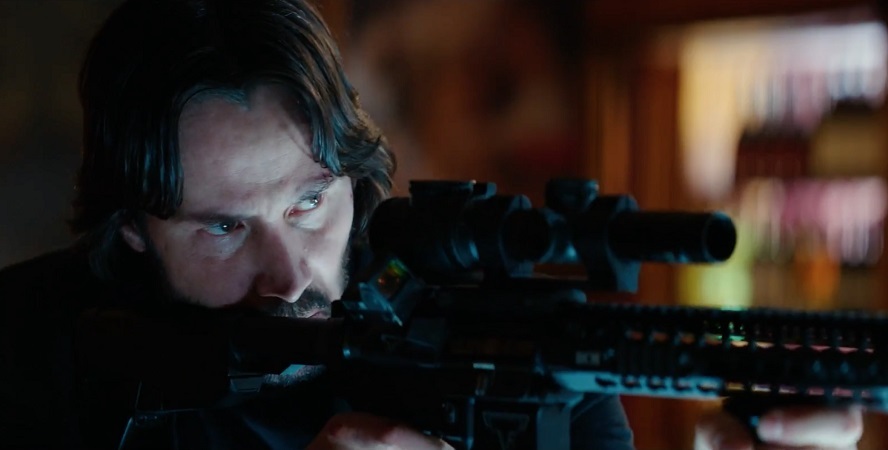 To be honest, the story is kind of thin as John is really reacting more to what is happening around and to him rather than being an actor on the film’s stage itself. There isn’t too much depth to be found in John’s character either as his motivations are largely set around survival and retaining the vestiges of his retired life. It’s difficult to quantify just why, despite these shortcomings, that the film’s writing endears itself to me. It serves well enough as a vehicle to get John Wick from one fight sequence to the next and you can pretty much guess where are the plot beats are. Wick’s motivations might get lost part way through the film but I’m gonna go out on a limb and say that you’ll probably not care. If nothing else, the story serves its role as setup for a film which is essentially made up of fight scenes between weird Bond villain henchmen.

In this regard, the ensemble performances of these eccentric characters becomes of paramount importance. Reeves does a formidable job as the action movie lead in this symphony of violence but credit should be directed to the supporting cast also. Ian McShane gives the utmost gravitas to Winston, the owner of the Continental Hotel, which helps give more weight to the mythos the film attempts to establish. Ruby Rose does a great turn as the bodyguard of D’Antonio and plays the role with suave and cheek which would have been fun to play, I’m sure. I also may have smiled with glee to see Laurence Fishburne appear opposite Reeves once more as the Bowery King and it was a pleasure to see him pontificate once more. 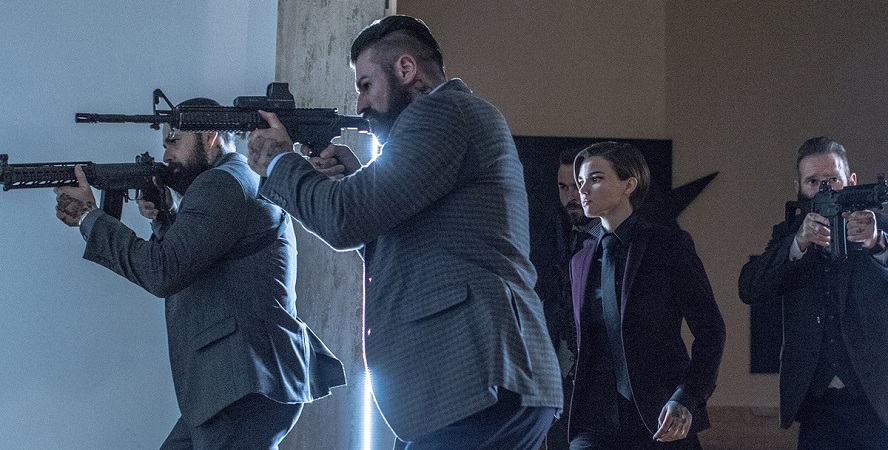 Honestly, the story may not be particularly inspired but what most certainly is the worldbuilding which takes place. Seriously, this film should serve as a master class on how to effectively develop and convey cool concepts for a cinematic universe. In the first film, you get the sense of Wick as an established player within a context quite alien to ours. In this film we get to see more of that alien context and it is a joy to behold. Every aspect of this world serves its utility in setting up the next plot point, as it needs them, but the film goes out of its way to make every detail it fills in interesting. Every turn, twist and crevice of this world is populated by interesting characters, dynamics, conventions, or concepts which make me super intrigued and eager for greater depth in an expanded universe. A television series based on characters and events alluded to in these films would certainly have my interest peaked. 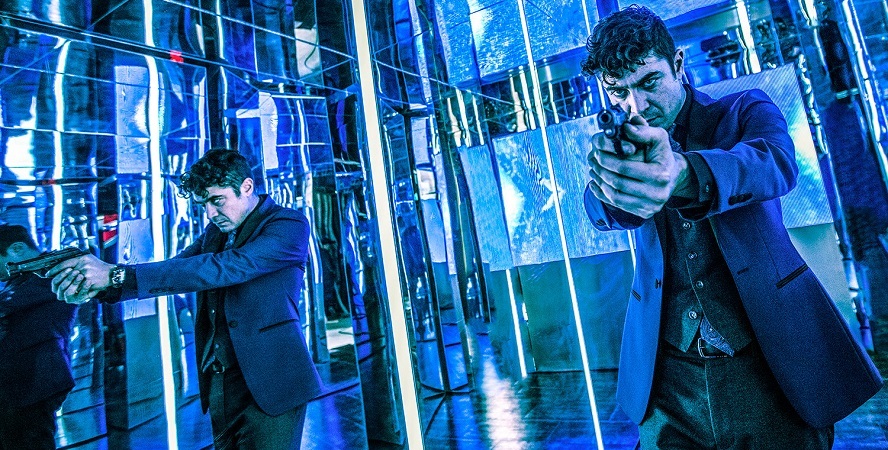 This film is absolutely fucking gorgeous. Not only are the fight sequences expertly choreographed, with the cast clearly put lots of (fake) blood sweat and tears on the screen, but the camera shots are beautifully composed too. The fight sequences are edited with a fast pace and rhythm to them so you’ll feel your pulse pound as Wick fights his way through the scene. On a base level, this film will get your adrenaline going and just for that, it is a competent action film but it goes beyond just that.

The cinematography is absolutely beautiful and the film is a perfect example of a neo-noir style. The way that this film plays with light and neon colours is a breathtaking addition to the action scenes. It gives everything an almost surreal quality to the ultra violence we see on the screen. This helps provide some emotional distance between the audience and the action but there were still some sequences where I could palpably feel the audience recoil. 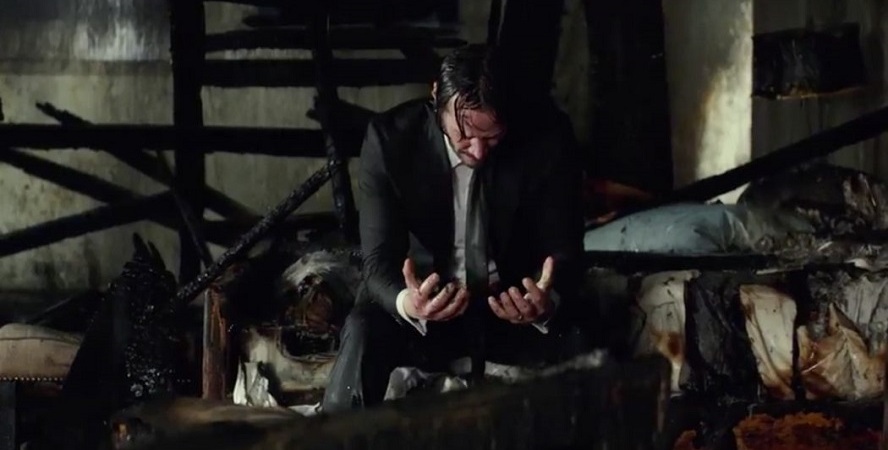 The film features some fairly robust soundtrack which jumps between a number of eclectic offerings. There are pieces which are more hard rock and industrial to keep pace with the frenetic editing. It’s an excellent accompaniment and is able to feature various influences to suit the changing scenes and settings of the film. It’s powerful and evocative stuff but didn’t leave too much of an impression on me after the film’s screen time was over. It did it’s job admirably in providing a baseline beat to the film’s action but was not used in such a way to make too much of an impression on me. 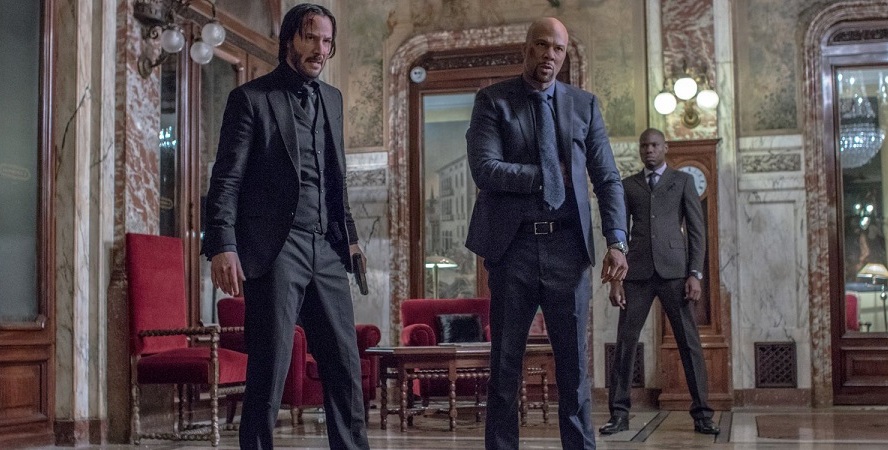 Overall, I heartily recommend John Wick: Chapter 2 as a fun, slick, and stylish action film set in an awesome universe. The story is a little threadbare but it makes up for it by making every ancillary character and detail of the world interesting in concept and execution. The visual direction expertly showcases the films fight choreography while also creating some very pretty eye candy for you to consume. The soundtrack is varied and very competent at scoring the film’s plot points but otherwise not particularly memorable for me. These elements come together to make a very competent and intriguing action film. I honestly wish this director and writer had been put to work on the Assassin’s Creed film considering how well they did with this film.

I look forward to whatever projects they work on in the future and I look forward to the next instalment in this action film series. Kudos!
Capsule Computers review guidelines can be found here.

John Wick: Chapter 2 is a well crafted action film and an excellent expansion upon the universe of the first film.
9