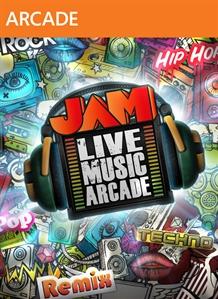 Overview
Remember how excited you were when you got your first plastic guitar controller? It doesn’t seem like too long ago when the music genre was at it’s peak, with Rock Band and Guitar Hero dominating sales across the board. Over the last two years, that market has dwindled, and a lot of those once loved peripherals sit collecting dust,  aching to be played with once again. JAM Live Music Arcade isn’t exactly a savior by any means for the rhythm guitar genre, as the heart and soul of the game actually steers into the direction of creation, but it’s certainly one under the radar release that must be tried by anyone itching to give those colored buttons one more for the road. Why, you ask? Here is my review for JAM Live Music Arcade. 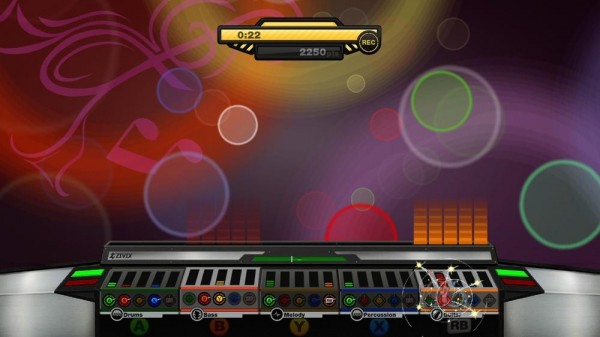 Gameplay
The first and main mode with JAM Live Music Arcade is of course the appropriately titled Jam mode. In this area, players get to construct their own versions of popular songs, bit by bit. Vocals, guitars, synthesizers, bass, and several other sounds are waiting to be remixed, and instead of getting to play these beats right off, you get to take the role of a producer and toy with each tune before eventually recording a mix made of all of the elements that are at your fingertips. We have seen several music generator programs released on consoles before, but Jam feels much more accessible due to the handy tutorials within (known as challenges), which provide a ton of insight on how the game actually works while allowing the player to feel productive through a standard progression format.

Down at the bottom of the screen, there are five different instruments with five tracks each. The player can turn on whatever instrument they choose by holding down the strum bar and pushing the correct color on the guitar, and then select the appropriate melody to play with that particular tune by simply repeating the same process. This lets the player change between beats on the fly, adding in vocals or drums at a moments notice – with even a handy timing meter that assures that this altering will be done to the beat and tempo of the current song. Timing is also important when selecting a track as well, as the player must keep a watchful eye on the tune’s loop in order to add the correct portion to their mix. As you progress as a master music maker, you will also see Jam start to open up more, too. You see, nearly everything is locked from the start, and the further you go within the main creation mode, the more options for customization you have at your disposal. Luckily, these additions are introduced at the perfect pace, meaning you should never feel too overwhelmed by all of the new goodies showing up on the soundboard. 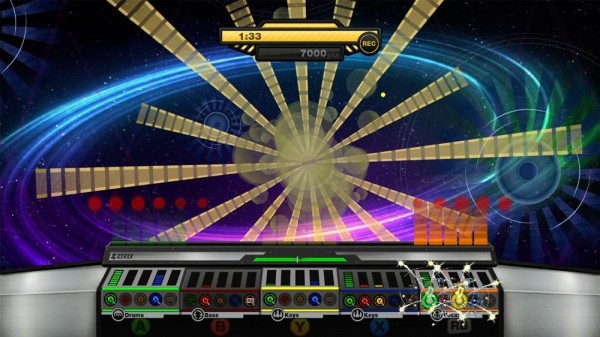 As I mentioned, Jam Live was built with the guitar controller in mind from top to bottom. Those who lack the tool to play the game shouldn’t feel upset though, as a standard controller works just as well for the the most part and in my opinion, the customization portions actually feel more natural with a controller in hand due to how well this scheme was implemented. This layout simply has the face buttons (A,B,X,Y) act as the four main guitar frets while the right bumper acts as the fifth, with the strum bar being handled by up and down inputs on the D-Pad. Yeah, it may sound a bit confusing at first, but once you are bundling together a song, everything clicks rather quickly and this alternate method becomes second nature. 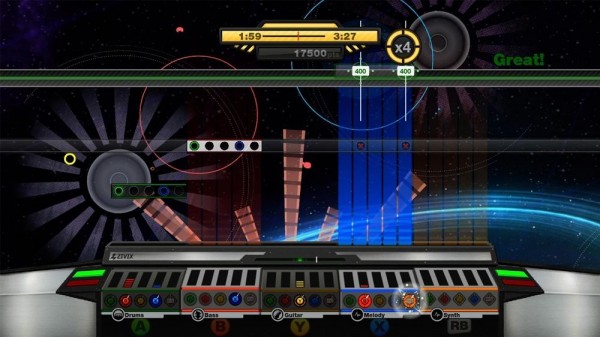 Jam mode really is a musical playground that should keep players busy for hours on end, but for those who lack the patience or that simply want to interact with their own creations, an Arcade mode has been added in to fill that void. This plays out a lot like your traditional Guitar Hero/Rock Band experience, where you can play a custom or default track by hitting the correct notes as they come across a bar at the top. It sounds like something that should be easy to execute, but the same method of control for Jam mode is also provided for Arcade, making things a bit overly complicated. As a beat rises to the top, the player must quickly switch to the correct instrument and then press the correct colored input to get a successful match. Doesn’t sound too bad, right? Well, when you have a song that includes a good number of switches in instruments, it feels almost impossible to keep up with the chaos going on in rapid succession. To be fair, this does get easier (and I use that term lightly) with practice, but I had many occasions where I would get so overwhelmed that I would exit and go back into Jam mode to get my musical fix, as Arcade is far less “arcadey” than it should be.

Visuals and Audio
As far as graphics go, don’t expect too much glitz and glare to come out of Jam Live. There are however some nice background effects that match the music that is playing, which are just eye-pleasing enough to hold your attention to the screen. Commands are mainly held in small boxes for Arcade mode, and they do their job well enough to pop up when needed so that the correct input can be made. Other than that though, not a lot was really done to make the presentation pop, but that’s not the point of the game and one small flaw that can be easily overlooked due to how involved the player will be with all of the main gameplay options on display. 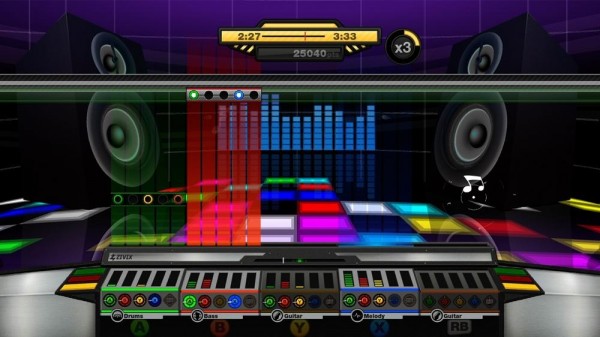 When it comes to the soundtrack, there is a ton of variety offered up that is sure to please just about everyone that span nearly every genre. From the poppy-rock beats of Fall Out Boy, the calming melodies of Owl City, there are plenty of songs that work beautifully with the customization aspects of the game, and of course are just as fun to play in Arcade. With that said, only 32 tracks can be unlocked throughout the game, but later DLC has been promised that will add more to the equation and when you consider the unlimited amount of mixes you can make, there is plenty of high quality tunes to keep you busy for a good chunk of time.

Overall
Jam Live Music Arcade is a musical romp that may go overlooked due to the dying genre it will surely be grouped in. Placing this title in that category should be considered a crime though, as there are a ton of well executed ideas at work here that allow almost anyone to not only remix songs with an in-depth editor, but to get a new appreciation for the art as a whole. Yes, the Arcade mode could use a bit more streamlining and holding a guitar isn’t the most ideal way to edit your masterpiece, but the experience as a whole is quite fulfilling from a creation standpoint and Zivix are definitely one small studio that know what they’re doing when it comes to crafting a musical playground. Add in the relatively low price-tag and infinite replay value, and you have one of the best reasons in years to get in tune with the genre all over again.