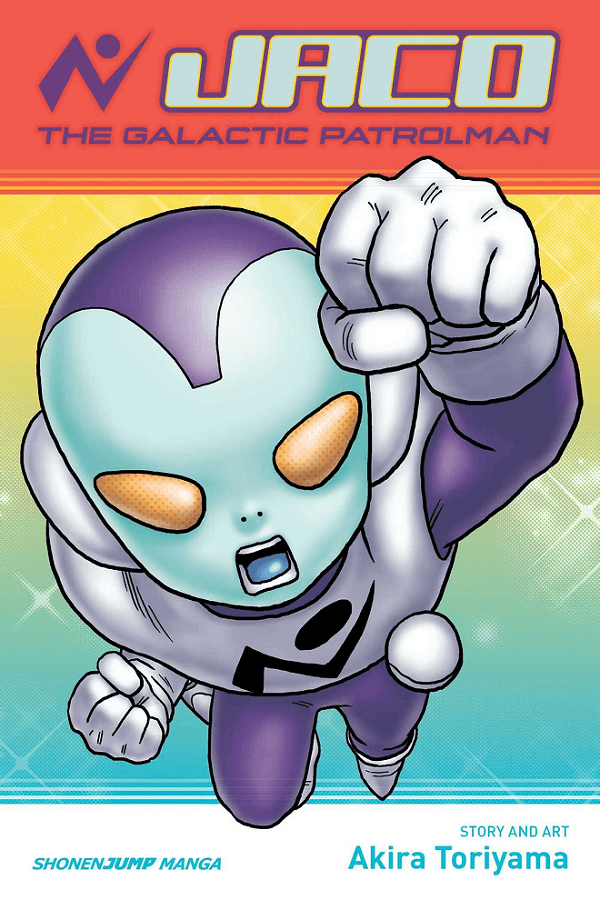 Overview
Akira Toriyama is a name that almost every anime and manga fan knows. With his manga Dragon Ball he managed to create a series that to this day remains one of the most recognized anime in the West with Dragon Ball Z. While he has long since finished the Dragon Ball manga, he hasn’t stopped writing small stories and in 2013 he wrote Jaco the Galactic Patrolman, a series that takes place in the world of Dragon Ball. Viz has collected the entirety of Jaco the Galactic Patrolman in one volume and now that it has been released, is this a story worth reading?

Story
The Galactic Police have detected an alien pod being sent to the planet Earth and due to the Earth’s low level of technology and strength; they have dispatched Jaco to the planet to put a stop to the alien once it arrives. Unfortunately, Jaco ends up crash landing near an island where only the elderly scientist Omori resides. Omori hates humanity after the loss of his wife and lives isolated on the island where he previously studied a way to control time.

After realizing that Jaco is indeed an alien sent to protect the Earth, Omori agrees to help repair his damaged space ship only to find that an extremely expensive metal may be required to power the ship. Shortly after this, the government informs Omori that he will have to vacate the island within a week due so that they can build a luxury hotel for politicians on the land. With only a week to fix Jaco’s spaceship and also find a way to stay on his island, various hijinks ensue such as defeating a giant man-eating shark, saving a young girl named Tights, and more.

Jaco the Galactic Patrolman really doesn’t have an extremely driven storyline as it simply coasts from gag to gag as various progress is made on Jaco’s ship and the reader sees the various misunderstandings that come from Jaco not understanding the way life works on Earth and the reactions from Omori and Tights at Jaco’s super strength and advanced technology. There are also a number of slapstick moments but as mentioned before most of the humor comes from misunderstandings and the way everyone reacts to Jaco.

This type of soft humor is unfortunately rather bland as it quickly runs its course over the first few chapters, but it works well for the type of story that is being told and despite there not being an actual drive to the story, every event is connected well enough to tell a complete and satisfying story. It is worth noting that there is very little action found within Jaco the Galactic Patrolman since Jaco is strong enough to defeat standard humans with one blow and wields a powerful blaster but doesn’t actually face any opposition.

It is worth noting that while it is not essential to know about the Dragon Ball manga or anime or even Dragon Ball Z to get the most out of Jaco the Galactic Patrolman, there are a number of events that take place within this volume that many fans of Dragon Ball will get a kick out of, especially since there is much more to Tights than meets the eye and the origin of the alien that Jaco is initially sent to scout will be very familiar to such readers.

Artwork
Those familiar with Akira Toriyama’s art style will know exactly what to expect in Jaco the Galactic Patrolman as his designs remain similar to what is found in Dragon Ball. While Jaco is a very simple character to design and has a unique look, the other characters, especially Omori and Tights, are very familiar looking as if they were taken directly from the main series. Even with the familiarity of certain designs, the characters all have expressive faces, which is essential for the amount of humor that depends on their reactions.

Extra Content
Now the standard story features character information between chapters, including information about characters that show up for all of only a few panels. Where the real bonus in Jaco the Galactic Patrolman is found is at the end. Once the main story ends a complete bonus chapter exploring the origins of Goku is included in this release.

In this bonus chapter we are introduced to a different scenario where Burdock, hearing that Freiza is planning on destroying the planet Vegeta to put a stop to the Super Saiyan and Super Saiyan God rumors, informs his wife and Goku’s Mother Gin-ne, that they must send their son away in order to keep him safe. This extra is a great addition, even if it moves away from what most Dragon Ball fans know of Burdock’s intentions.

Overall
Jaco the Galactic Patrolman doesn’t feel like anything new or different for Toriyama but it does tell a solid satisfying story that is fairly funny thanks to the way that he seems to channel his comedic sense found in early chapters of Dragon Ball into this series. Jaco the Galactic Patrolman may be a bigger series for Dragon Ball fans who will enjoy the various references and character cameos immensely. As for those who aren’t familiar with his works, they will still find a simple and enjoyable story all contained in a single volume.