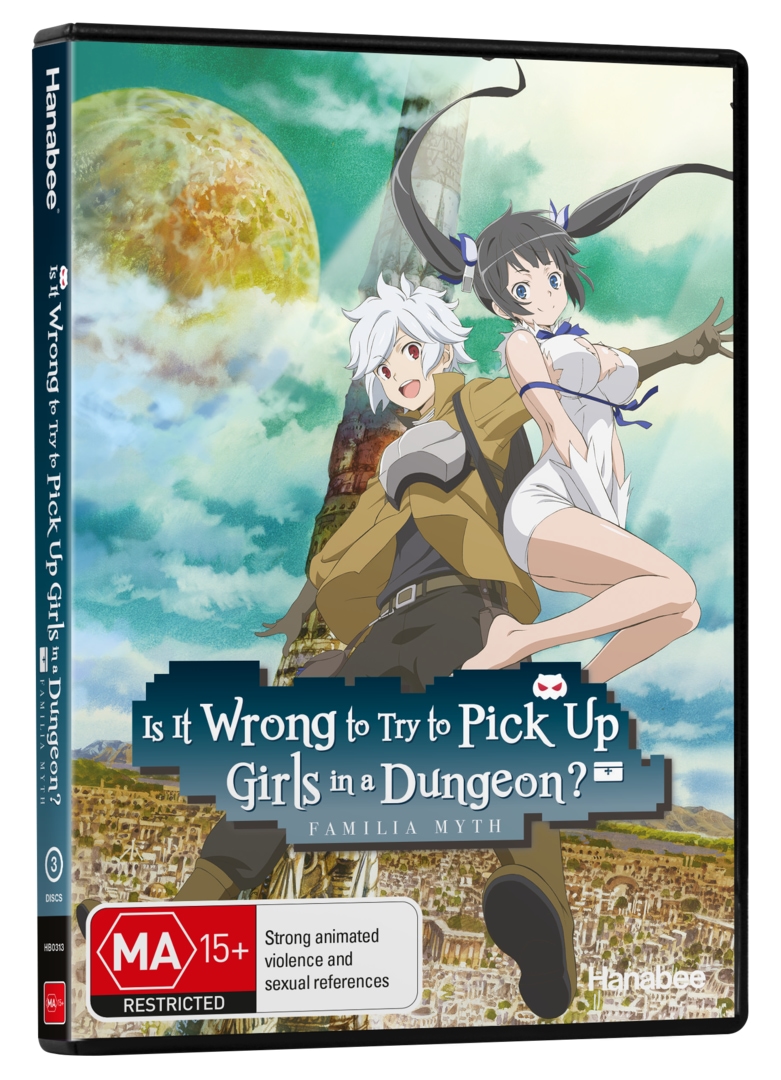 Is It Wrong to Try to Pick Up Girls in a Dungeon?

One day, the gods decided to give up their powers and descend to the world of humans. Hestia is one of these gods and the leader of the Hestia Familia. A young boy named Bell Cranel is the only member of her Familia, but he makes up for his lack of partners with his often reckless pursuit of his goal of becoming an adventurer. He also hopes to one day save a girl in the Dungeon, a place where monsters spawn randomly and drop crystals that can be exchanged for money on the surface. One flaw in his plan is his initial lack of strength, which causes him to end up being the one rescued by a girl. Bell’s one redeeming quality is his perpetual kindness, caused by his utter naivety, and his forgiving nature helps him befriend a supporter named Liliruka Arde and a smith named Welf Crozzo.

As much as this series, often referred to as DanMachi, is focused on Bell, it is often far more interesting as a viewer to instead focus on its setting and pay attention to the characters around him. His entire character can be summed up easily. He wants to be an adventurer, save girls and protect his goddess Hestia, and he is kind and forgiving to a fault. Girls fawn over him and sometimes literally throw themselves at him because of the original author’s bizarre and sexist interest in male wish fulfilment. Bell may look slightly different to the average harem protagonist, but his romantic indifference to the person who cares about him the most, Hestia, puts him squarely in the same category as every other generic harem protagonist out there. This is the reason why it is worth paying attention to the world around him instead of caring about him as a character; the world of Orario is inhabited by many different kinds of people who interact with each other in unexpectedly dynamic ways. 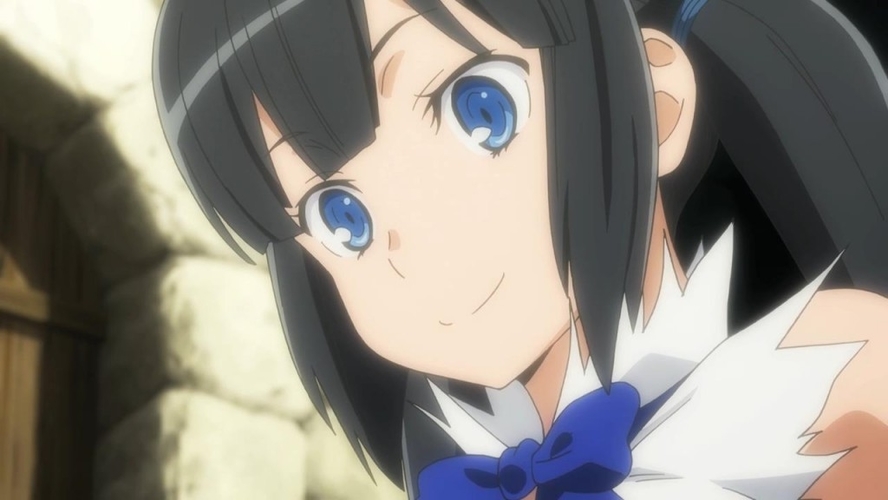 There are a large number of recurring and supporting characters introduced in these 13 episodes, far too many to become familiar with or even remember the names of. However, there are inevitably a few that have some interesting stories to tell. Liliruka Arde is a supporter with a tragic past, one that is significantly more disturbing than anything else presented in these episodes. Despite being young, she knows too well just how harsh and unforgiving the world can be. Bell is only able to befriend her by being kind to her and accepting her for who she is when no one else would, even after both of her almost-successful attempts to betray him. He may be naive and often childish, but his character is used to help bring out the best in those around him.

Welf Crozzo, a smith who does not like actually producing magic weapons, is intriguing, and does receive some character development. Unfortunately, that this is an adaptation of a much longer story becomes very obvious in the final episode because of him. His involvement in the story is apparently more significant than it seems. Despite this, he is largely pushed to the side in the final episode in favour of a dramatic conclusion in which Bell ultimately saves the day after receiving help from more skilled fighters and mages, including several recurring characters.

Only a few of the minor characters outside of Hestia’s Familia actually feel like a genuine part of Bell’s journey, one of whom is Ais Wallenstein from the Loki Familia. She is known as the Sword Princess because of her extraordinary fighting abilities, and after saving Bell on multiple occasions, she helps him improve his own fighting technique. It would have been far more effective to introduce the other minor characters one or two at a time over the course of a few dozen episodes, not over a mere 13, but the end result is that many of them feel like unimportant video game NPCs that can be forgotten as soon as they are off-screen. It could also have been better explained why the gods decided to give up their powers for all eternity and resign themselves to a life of running their Familia without actually being allowed to become adventurers, but a little too much screen time is wasted on trying to keep up the breakneck pace of the action by introducing distraction after pointless distraction. 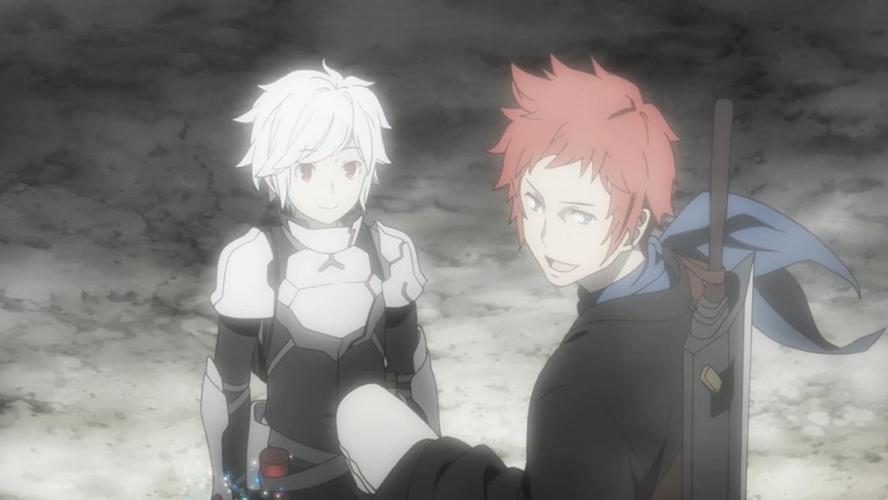 There are two elements of this adaptation that make this more engaging than a harem series has any right to be; one of them is the visuals. The world of Orario and the Dungeon come to life here. They have a lot to offer, from the old architecture of the buildings to the varied layouts of the various floors in the Dungeon. It is all fleshed out with a lot of care and effort, making this one of the more unique and interesting settings of any harem series.

J.C. Staff’s animation stands out as being consistent and high quality. Bell and his friends’ move fluidly even when pulling off crazy attacks on agile and giant monsters. There is a lot of blood, marking one of the more notable differences between this and actual RPGs, but humans rarely suffer any injuries that they cannot recover from. Being a harem series, it should come as no surprise that the vast majority of all female characters are sexually objectified and depicted as being almost perpetually lustful whenever Bell is present. Most of them also happen to consistently wear almost no clothes; they exist solely as ‘fan-service’ and not as characters with any identifiable personalities. It detracts enormously from the adventures and the intriguing elements of DanMachi. The parts of this adaptation that are not bogged down by offensive male wish fulfillment are entertaining, but the harem elements destroy any possibility of it reaching a larger, mainstream audience. 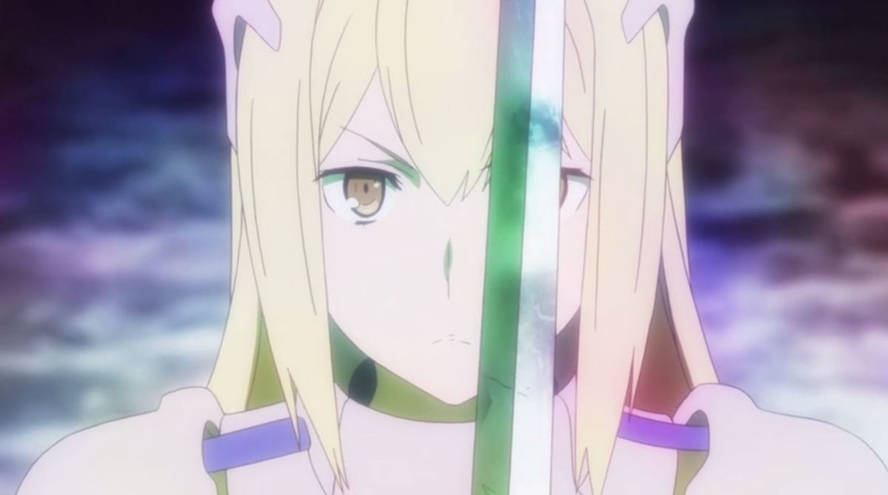 The audio is the other major highlight of this adaptation. Kenji Inai’s background music is surprisingly energetic; orchestral pieces are used throughout every episode, adding to the sense of adventure that we get whenever Bell and his friends are going through the Dungeon and fighting monsters. Inai does his best to compensate for the nonsense that pervades so many scenes on the surface and later on the 18th floor of the Dungeon, and his efforts go a long way. The voice actors do their best to give the characters some personality, and the resulting English dub is about as good as it gets for a harem anime. Unsurprisingly, Luci Christian portrays the hyper-energetic Hestia excellently, and Hilary Haag does a fantastic job at capturing Liliruka’s troubled but determined character. More wordplay in the dub would have been nice, but there are no bad performances, which really helps the audio stand out. 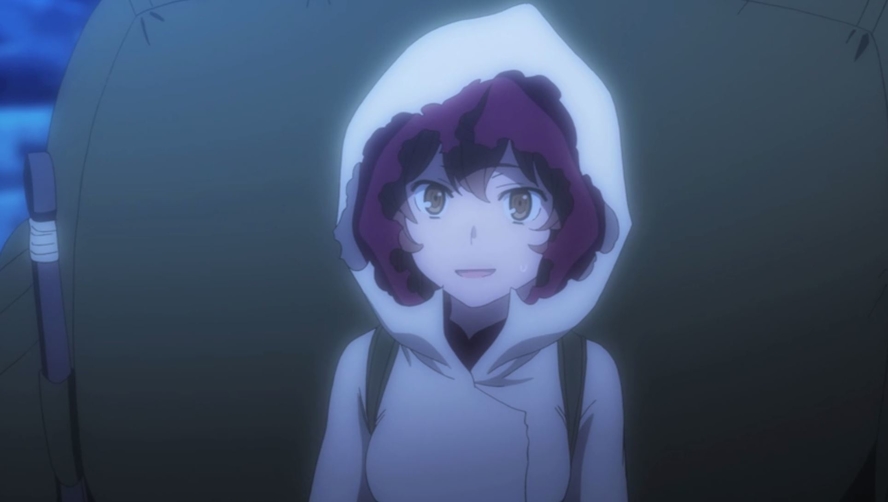 The textless animation sequence for the opening song “Hey World” and the textless animation sequence for the ending song “Right Light Rise” are included on the first disc. The animation for the ending song is fairly standard, but the animation for the opening song is notable for the large numbers of characters it presents for just a few seconds at a time. There are so many that it could be a challenge for viewers to remember the names and roles of every single one.

DanMachi provides the strange but interesting experience of watching a role playing game instead of playing one. The experience is unlike watching a let’s play, however; it is as if a five-hour mystery dungeon game unfolds as a series of long but well-animated FMVs. The world of Orario is well-crafted and contains both a history and a culture that contrast heavily with the kinds of settings normally seen in harem series, although that history is not explored as much as it should have been. It is obvious that this is an adaptation created to sell the source material, so it is possible that longer explanations are given for certain things in the original story, such as why monsters spawn in the dungeon and what ultimately led to the gods giving up their powers. For western anime fans, this adaptation does tell its story almost as well as it could have in just 13 episodes, so it may be worth your time if you are a fan of harem anime series or anime set in alternate worlds. It cannot be overstated, however, that it features some utterly ridiculous and downright misogynistic harem antics, that it can be disturbing at times and that only a few of the female characters are actually developed as characters.
Capsule Computers review guidelines can be found here.

Despite the misogynistic harem antics and the very large number of seemingly unimportant characters introduced, this anime adaptation presents a few dynamic characters and makes the idea of watching an RPG more fun than it sounds.
7