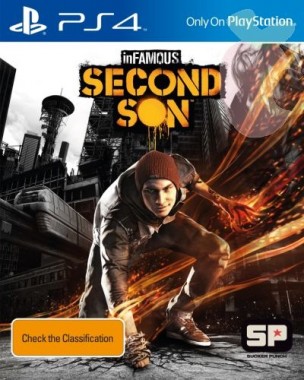 Overview
Since the debut of the series on the PlayStation 3, Infamous has become a staple hit in Sony’s library. Mixing the superhero narrative with an open world and a morality system has proven to be a winner thus far, so fans were more than a little excited when Infamous: Second Son was announced for the PS4. By dropping the numbered title and introducing a wildly different protagonist, does Second Son prove to be a new birth on Sony’s latest console?

Story
The player is thrust seven years after the events of the previous game and the world is looking no better. The Department of Unified Protection (D.U.P.) is an organisation formed to stamp out the remaining Conduits, or Bio-terrorists as they’re known. Led by the shrewd and brilliantly-voiced Brooke Augustine, who is a Conduit herself, this authoritarian security force is the main enemy in the game and has seemingly unlimited funds as you smash your way through billions of dollars of men and resources. 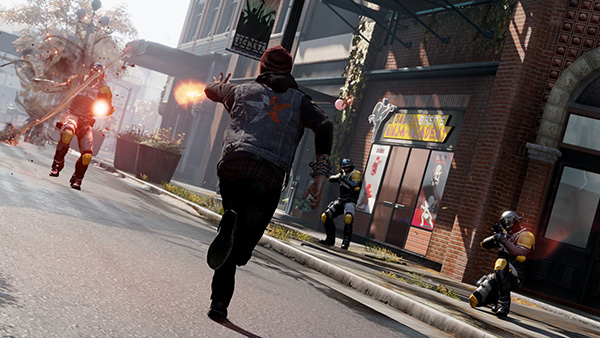 You play as Delsin Rowe, a cocky graffiti artist and local trouble maker of his small, Akomish Indian community. His brother Reggie is the town sheriff and is tired of arresting Delsin over and over again. You can imagine what kind of conversations are on offer between the two for the rest of the game; constant arguments and banter that resembles a game of tennis, in which Delsin often proves to be the winner.

While entertaining to an extent, it can get very wearisome to hear bickering rather than a decent conversation in each cutscene. Once he acquires his powers, Delsin’s comic book-hero character is presented in the most typical and arrogant way. The offhand remarks in dangerous situations will remind you of adventurous characters like Nathan Drake, so it’s hard not to have fun with the script. He does grow as a person however, depending on which “karma” path you choose, whether it be good or evil. 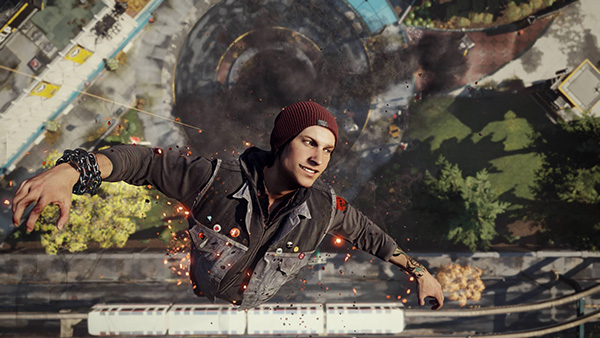 Delsin embarks on a vendetta against the dictatorial Augustine in what is a very personal affair. In order to save his aunt Betty along with other victims who have suffered from Augustine’s concrete super powers, he must acquire the power himself. Along the way he defeats other Conduits, who serve as key characters in the plot, and borrows their powers in order to grow stronger.

Interspersed within the story are themes such as segregation and drug abuse (Delsin can disrupt the drug trade in the city for good karma) but it’s all presented in a fairly obvious way and the superhero narrative doesn’t allow for much thinking when you’re wrecking havoc. 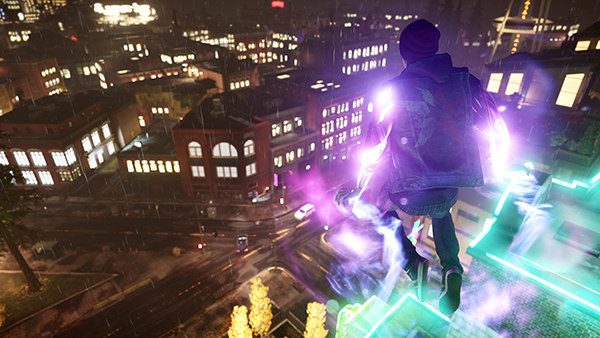 The story is as you would expect from a AAA, first party title. The presentation and cinematic direction is up there among all high budget exclusives and the script is movie-like, albeit pedestrian. Even with its motion-capped cutscenes, Infamous: Second Son won’t win any awards for its by-the-(comic) book storyline.

Gameplay
It’s a lot of fun. While unwieldy and awkward at first, especially when you’re limited to just the Smoke power, you’ll soon be having a blast rapid-firing lasers, swinging digital swords and whirling your way up buildings in a vortex of colour.

Fundamentally, this is a third-person action game with parkour elements, though I have to say the climbing is more frustrating than practical. Delsin is limited to just leaping around as if in low gravity, meaning you don’t get that fluid hand-over-hand climbing like in Assassin’s Creed. In the end, you will resort to just using your powers in order to barrel your way up across obstacles.

The upgrade system works by collecting shards which in turn give you new abilities and increase your power gauge although it’s a little easy to max out your character. Entirely new tricks are learned along the way according to the story. Enemies are numerous and you might find yourself scurrying away often and waiting for the regenerative health to kick in. The battles can be awesome, especially with earth-powered soldiers flinging themselves into the air forming arches behind them, just like in the anime Full Metal Alchemist. 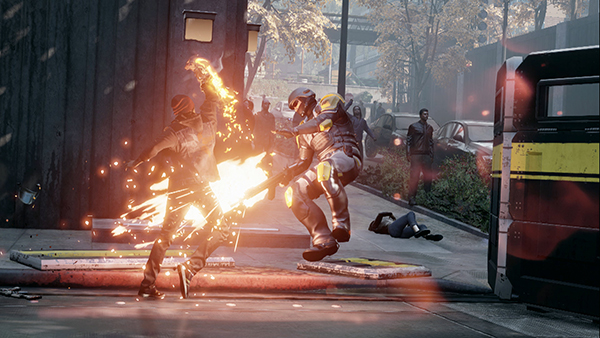 Second Son breaks no boundaries with its core gameplay. You have a large map, Seattle, which is dominated by the D.U.P. via bases which you must destroy in order to win over parts of the city. This can actually be pretty repetitive as you destroy the same-looking base with the exact same animation every time. The bosses are a nice change to the open world gameplay, giving players a challenge in classic boss arenas which can be visually spectacular.

One major feature is the karma system which, unfortunately, follows the cookie-cutter route of Good or Evil with nothing in between. You either select the blue option or the red option and players that aim for either path will choose whatever colour they’re after, negating any moral decision-making. It would have been much better if the game didn’t spell out every choice it gave you, and even then it’s fairly obvious. Regardless, both good and bad karma paths result in different play styles (subduing or outright killing enemies) as well as different abilities being available so there is a strong incentive to go back and play it again. 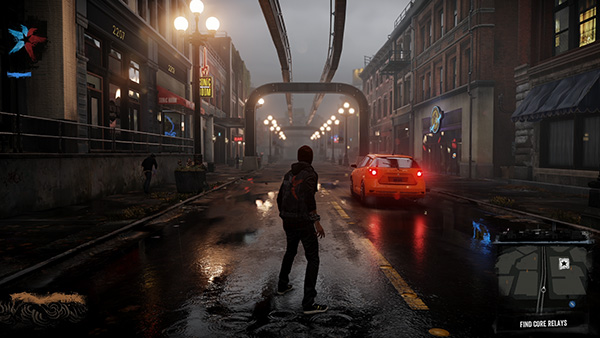 Visuals
To put it simply, this is the game to show off your new PS4 and TV. Second Son is a beautiful game to look at with Seattle highly detailed, faces motion-capped and some of the best particle effects you’ll see on a console. Although Delsin’s character design wouldn’t have been my pick if I was in charge as some of the striking concepts looked much cooler. This is of course subjective though and your eyes would honestly have nothing to complain about the graphics here. Instead, they’ll relish it.

I noticed some framerate dips, though not unacceptable, during heavy action and it changes depending on the environment. Logically, once the sun sets or you enter indoors the game runs silky smooth.

Audio
Along with the graphics, sound design is also a high point with on-screen action and superpowers firing off impressive zaps and bangs, the sound track containing surprisingly cool tracks and voice acting that’s on a silver screen level. The game also makes great use of the PS4’s controller speaker when recharging powers or when Delsin’s phone rings. 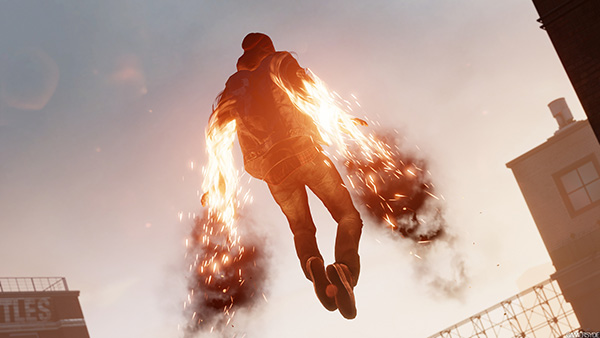 Overall
There is a lot of fun to be had in Infamous: Second Son with its creative super powers, comic book humour and swish graphics. However, the bog standard open world system feels like it’s crying out “me too!” and there isn’t all that much players can do in the recreated Seattle once the dust settles. The karma system also feels lazy when it comes to making moral decisions, even though it’s a fundamental mechanic in the combat system and affects the story in one of two ways.

While it’s not an earth-shattering entry in the series and a little late to the next-gen party, this is still the most fun you will have with your PS4 right now.