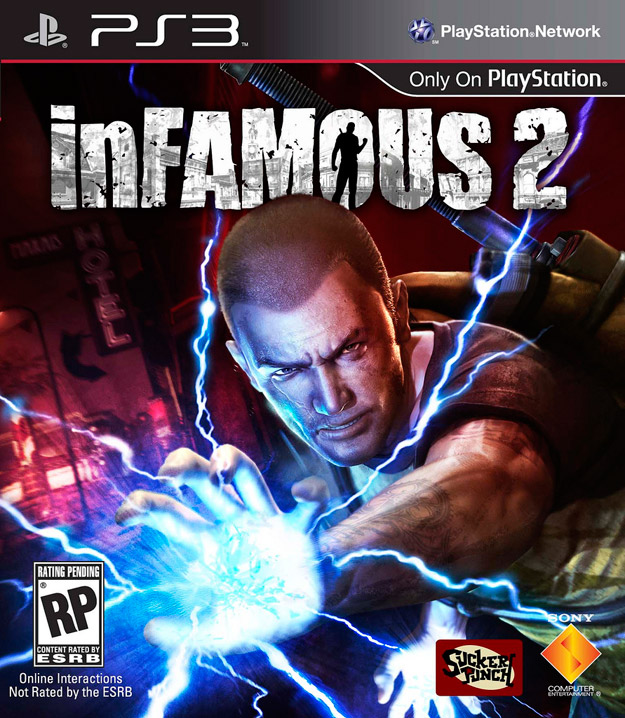 Cole McGrath would have to go down as being one of the toughest men on the planet. Aside from Kratos who is brutal incarnate this guy can take so much punishment for good or evil it’s disturbing. Infamous 2 returns Cole to the realm of the Beast and briefly back to Empire City where Cole, drained of his powers, makes a run for it with his crew to New Marais to replan and replenish. Sucker Punch have gone all out to create massive immersive environments, that encourage players to free roam and complete the wide array of side missions and karma boosters on offer. 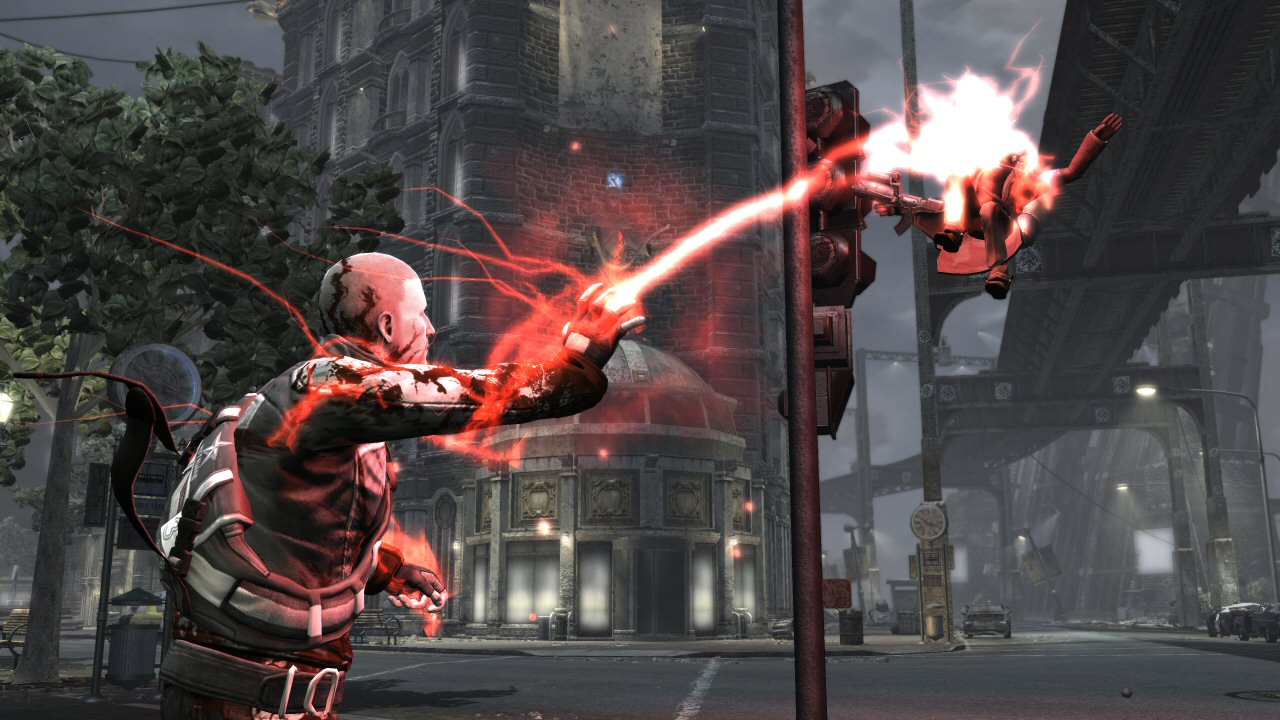 Without going on and on and boring you with intricate details I shall provide a quick rundown on the various characters and basic plot so anyone who hasn’t played the first game can easily relate. After escaping from the Beast but unable to stop its sheer power and size, Cole and his crew of Lucy Kuo and Zeke make a dash to New Marais city to plan their next move. NSA agent Kuo fits into the picture through her relation with the infamous Dr Wolfe who worked on the development of the Ray Sphere responsible for Coles electrifying powers.

New Marais unfortunately has problems of its own. Under the dictatorship of Bertrand, the city is under lock down as his army of human purists hunt down and kill the remaining conduits. Reconnecting with Dr Wolfe, Col learns of the Blast Cores scattered around the city that if absorbed into his body would enable him to power the RFI and potentially cripple and destroy the beast. Unfortunately for Col, Wolfe is soon captured and things go from bad to worse when Kuo is also taken prisoner while attempting to rescue him. 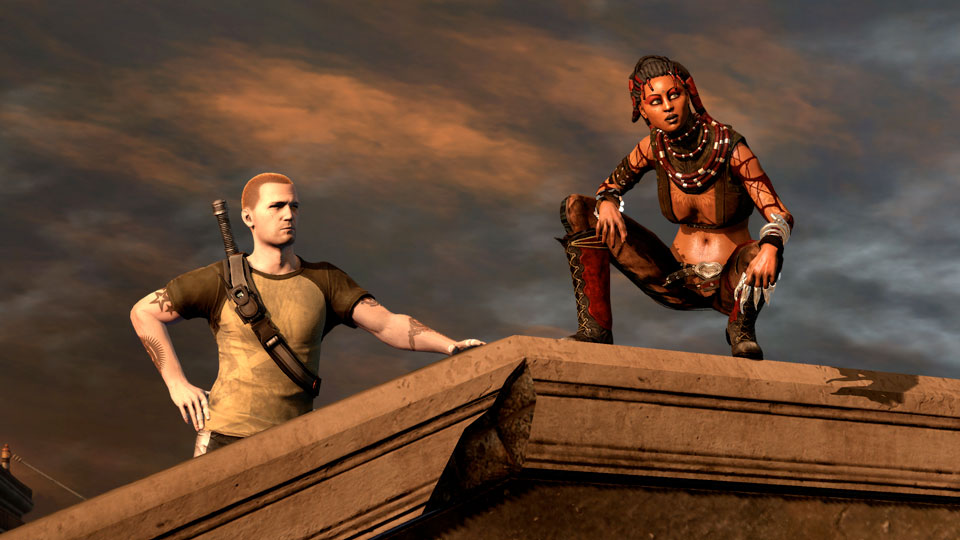 Where theres enemies theirs also friends, and Col and Zeke quickly become acquainted with Rouche, a resistance leader, focused on eliminating Bertrand from the city, and Nix, a fellow conduit who escaped a Ray Sphere attack on her city but has been infused with conduit abilities. Both agree to aid Col rescue Kuo who has been tortured and infused with conduit powers of her own. From this point Cols conscience and morals come into play as he finds himself in a constant battle between following Kuo, or falling for the sexy allure of Nix and really letting loose the demon inside him. I don’t want to give too much more of the story away but it twists and turns, culminating in a very unexpected finale that will really test what is left of Cols (or the players) human soul.

This game reminds me of Spiderman but on steroids. There is no building or bridge too high for Col, and his amazing array of electric and ice/fire abilities allow him to travel within the city with ease. Environments are huge, which is necessary considering the sheer number of campaign and side missions made available in single player mode. Gameplay primarily takes place on 2 different sides of New Marais, one being a more traditional city landscape and the other looking more like a war zone almost completely covered with varying depths of Cols mortal enemy; water. Both are highly interactive and almost every object can be used to Cols advantage. 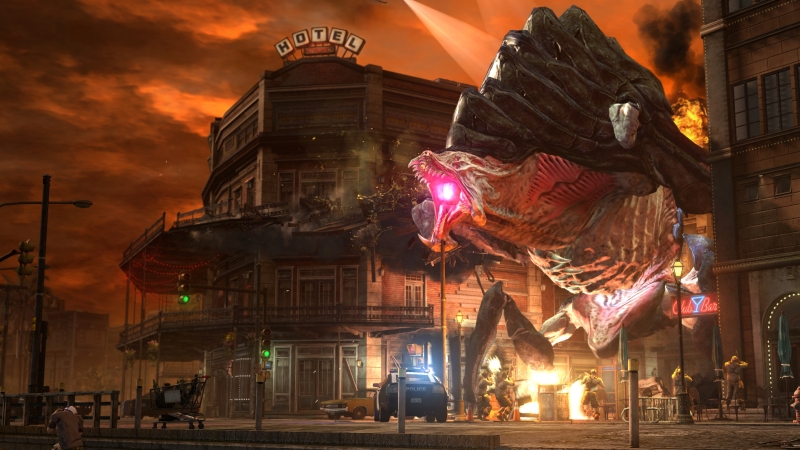 Everything about this sequel feels more powerful and destructive. From lifting cars with ease using kinetic powers to the sheer epic size of his enemies the whole game screams intensity. One of my favourite parts (despite taking numerous attempts), was running down the street fighting a massive ugly beast, looking around for vacant cars and rubbish bins to hurl at it, as it plundered along without a care in the world for squashed civilians, destroyed houses and buckled sidewalks. Every Boss required a different strategy, including traditional weak points through to aerial attacks and out and out destructive force. Cols standard weapons more often than not have little to no effect on the larger bosses who all require much more firepower to destroy.

Controls are very easy to master and soon even players unfamiliar with the franchise will be skating over power lines while shooting bolts of lightning at will. There were a few instances where Col went a bit haywire usually when performing more intricate controls which was frustrating but were few and far between and didn’t have too much of an effect on the experience. For example, flying around from building to building was easy but simply climbing a ladder required the utmost effort. Also melee combat although very pleasing was very limited in control with Col taking many air swings. When it came down to it in the big battles the controls were fluid and didn’t disappoint. 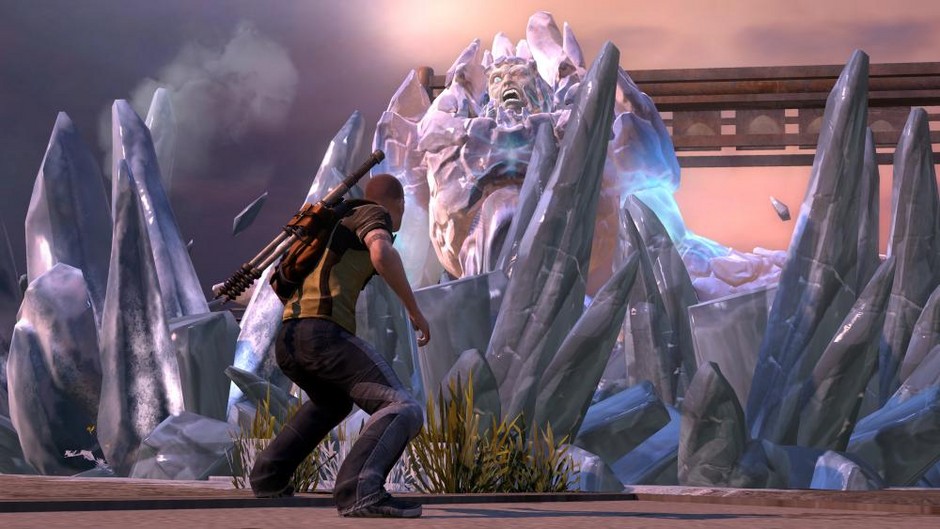 As well as the basic storyline there are a multitude of side missions to complete throughout Cols adventures. These range from collecting medical supplies and stopping enemy convoys through to saving civilians and helping out the local resistance groups. Some of the side missions pop up more than once and are more like mini games very well intertwined into the campaign mode. Players will either have to control Col as he takes the form of a tesla missile and literally fly from one power station to the next in order to power it up. The other mission involves overcharging Col and then transporting him to a power station only using the power lines to skate on or fly across. Both are very challenging and progress in difficulty as the game goes on. The side missions are an essential part of building up enough AMPs to purchase different weapons and abilities. As well as the standard side missions, players can embark upon specific good or evil missions which heavily influence your karma meter.

Players who choose to side with Kuo and take her advice in hairy situations will gain ice abilities and those who fall prey to the seductress Nix will have fire at their fingertips. Each route will take players down very different roads inclusive of side missions and how the public react to you.

More varied styles of play such as hanging from rooftops and shooting enemies or using the environment such as water to electrocute the enemy all aid to unlock more abilities. Players chosen karma will also ascertain the various abilities available to purchase. Other abilities in Cols arsenal include his vortex (ice/fire) wind that knocks enemies off their feet, kinetic powers allowing him to hurl heavy destructive objects as well as grenades and flying upgrades. For cose combat Col now carries a charged rod capable of dishing out massive amounts of violence. As upgrades are bought Col will learn new attacks and more explosive finishing moves.

Where this game really comes into its own are in the immense long range battles. It’s not uncommon for Col to find himself surrounded by enemies on all rooftops, having to hide behind various objects while keeping an eye on available recharge points. AI are smart and have incredibly good aim so it’s essential Col can take a beating and most enemies weapons don’t pack too much of a punch. Gliding from rooftop to rooftop, taking out enemies and choosing a good vantage point is pure joy due to ease of the control system. Allowing him to blast his way out are the wide and varied bolts at his disposal ranging from long range streaks to concentrated balls.

Scattered throughout the city, and constantly popping up on the map are various tasks that Col can optionally perform to increase his Karma and earn more AMP’s. Unfortunately there are only 4 different variations and over the course of the game become a little repetitive and tedious. Still I would recommend doing as many as you can to earn those precious AMP’s and unlock abilities. I chose the good path to redemption and had to stop muggings, defuse bombs, revive civilians or shoot message carrying birds. 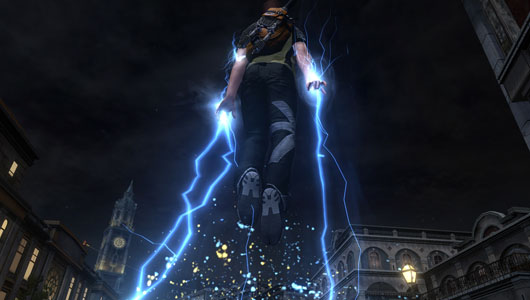 The fact that players have to choose between good and evil paths even within the campaign missions gives Infamous 2 huge replay value and players a totally different experience. Having players choose different outcomes allows them to interact and enjoy the game on a different level unlocking new abilities and following different characters paths.

Oh and don’t forget to collect the blast shards which are scattered throughout every environment in the game. Don’t hesitate to collect them whenever you see on even mid mission, they are invaluable in increasing the amount of electrical charge or essentially ammunition Col can carry. Your electrical meter is drained accordingly to your mode of attack with standard bolts having little impact and grenades and bombs heavily sapping your energy.

Online mode has seen the introduction of User Generated Content. Players can create their own missions and upload them for the rest of the community to use. These missions will appear on your screen like others and are rated after completion to find the top creations.

Aesthetically speaking, Infamous 2 is very pleasing even though many will argue it lacks some of the finer detail found in modern day war based shooters. Don’t get me wrong, the enemies are well constructed and look amazing, and the skin and contrast rendering on Col, Zeke and Co. are exceptional. The cities are vibrant and explosions and visual damage to the city gives a real sense of the intensity and extent of the damage inflicted. Integrated into the story are the cut scenes which are appropriately rendered in a graphic novel style. They really give the game that dark feel similar to Sin City or the like. Cols voice is gritty, reminding us of a man who has been through hell and back to get to where he is. Sound effects are bold and give the sense of real chaos in a crumbling out of control city.

Sucker Punch have really come to the table with Infamous 2, creating a gaming experience rich in storyline and a refreshing change from the traditional Uzi or shotgun wielding hero. Everything in New Marais city is interactive and players are never left with the feeling they should be able to achieve more. Enemies are over the top and of epic proportion; the kind of beasts that really could level a city, and while Col’s size pales in comparison his abilities more than make up for it. Infamous 2 has elements that require finesse and the controls are responsive and easy to use despite the odd hiccup in Cols directional sense. Everything within the game fits well, from the side missions essential to gain enough AMP’s to gain the abilities needed to defeat the various anatomically incorrect beasts, to the karma system and associated storylines. This is a very welcome addition to the franchise at to a gaming market currently flooded with FPS and real life war interpretations.