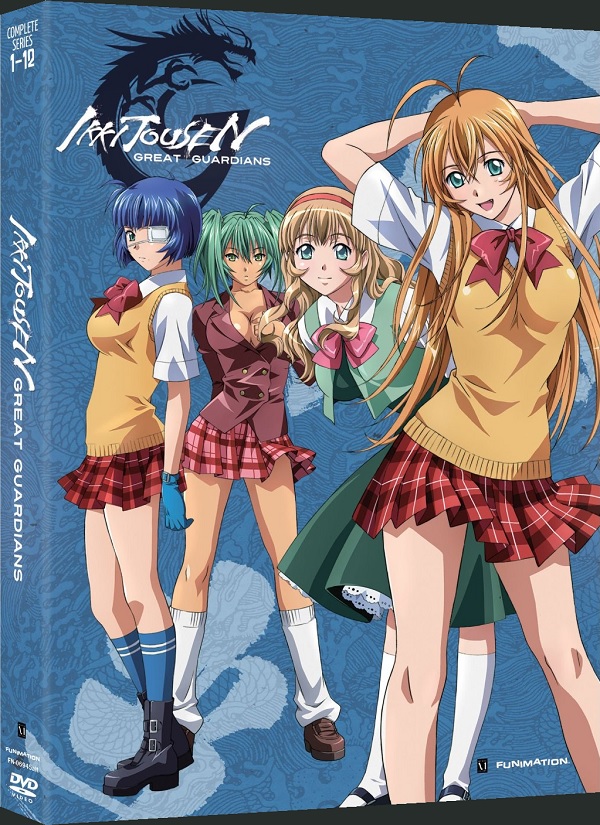 Overview
A staple of any ecchi action series involves the female cast battling it out with most of the damage presented as clothing being ripped apart, resulting in exposed breasts and panty shots everywhere. One of the series that started this trend is Ikki Tousen and it has had quite a bit of trouble with licensing over the last few years.

After Geneon folded with the first anime season, FUNimation obtained the license, but Media Blasters acquired the second and third seasons. However with Media Blasters’ numerous issues, they were only able to release the second season and they eventually dropped the third season’s license. Now, almost six years after Ikki Tousen: Great Guardians aired in Japan FUNimation has brought this release to North America. The question is, was it worth the wait?

Story
In Ikki Tousen a number of teenagers in Japan possesses sacred jewels which contain the souls of warriors from the Romance of the Three Kingdoms. Despite being over 1800 years since that era ended, the souls of these warriors still burn brightly seeking battle and those who possess these jewels not only become fighters who will do battle with one another but they will even follow the same fate as their predecessor. 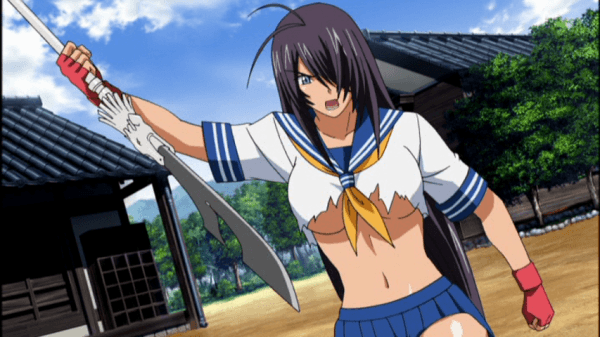 Now, that being said, Ikki Tousen: Great Guardians is the third season in the series and while those jumping into the show at this point may think that they would be losing out on a lot of plot development, as far as this season goes it really isn’t too much of an issue as very few developments from the first two seasons are brought out of nowhere in Great Guardians and most of the character relationships are easily figured out.

Anyways, Ikki Tousen: Great Guardians continues the story following the events of Dragon Destiny and the fall of Kyosho Academy’s (Wei) leader. Since his defeat the life of Hakufu and her cousin Koukin, both of which are fighters with souls from the Wu Kingdom, and the rest of the fighters have been living relatively calmly and enjoying the peaceful times between the Nanyo (Wu) and Seito (Shu) academies. 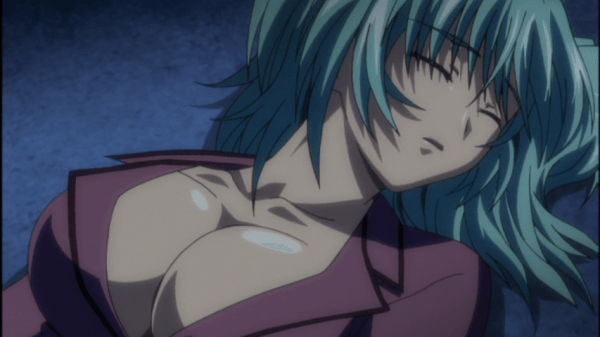 During this time a girl claiming to be the younger sister of Hakufu arrives and starts living with both Koukin and Hakufu as they attend school. However while the inclusion of a long lost sister is a bit of an addition to the series, the return of a once thought dead fighter returns in the form of Ryofu who not only has a jaded past with many of the fighters at both academies but she is also suffering from an extreme case of memory loss where she no longer remembers who she is.

Ikki Tousen: Great Guardians takes a bit of a different approach compared to past Ikki Tousen seasons as the fighting takes a back seat to watching the characters interact with one another or mess around somewhere with most of the time spent focused on Ryuubi and Kan’u and the main members of the Seito fighters and with most of Hakufu’s focus spent on her idiotic actions and time spent between Koukin and the little sister. 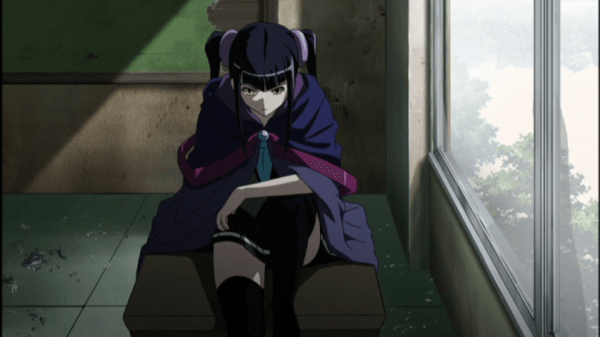 Any hints at an actual story are kept subtle for the most part, with the amnesiac Ryofu being taken care of Ryomou as we learn more about their past with one another all while Saji, a fighter both of these girls know all too well, has darker plans in the works. As a mysterious robed girl appears and members of both schools begin to act strange and fight against one another, Hakufu and the others must put a stop to the mastermind behind this plan.

For the most part, Great Guardians’ story works just well enough to be enjoyable since although the fights are fewer in number, this season focuses on controlling others and putting the bonds of friendship to the test. Where it fails however is almost everywhere else. While there are a few references to how these fighters are trying to change their fate and not let destiny control their lives, it plays a minimalistic role in this season. 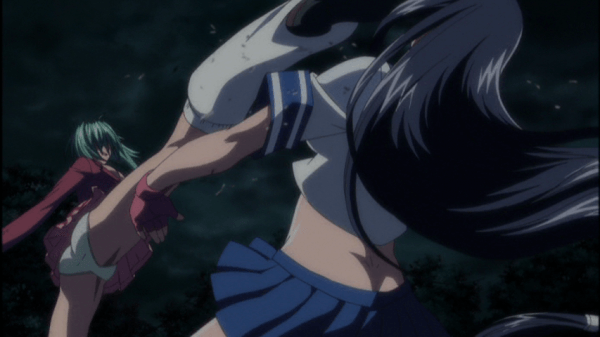 Even though two new characters are introduced, both are one-dimensional with little actual character development. In fact, the only character to receive some development this series is Ryomou as we learn more about her past and the dragon inside of her. Outside of that the season focuses heavily on fan service, screen time and interactions for fan favorite characters, and a few battles here and there.

Visuals
It is worth noting that while Great Guardians might be receiving a release here in 2014, the anime originally debuted back in 2008 and as such, the artwork and animation in this season does feel dated not only due to the age but the lack of overall quality that Arms put forth at the time. The characters have the same designs that fans remember and these designs are fairly basic with similar looking outfits for each school that are often ripped apart in battle to show off a girl’s panties and breasts. 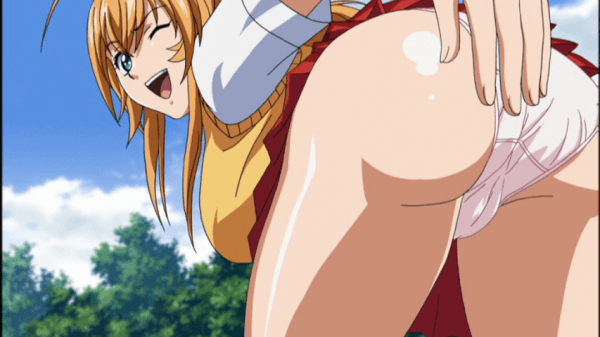 The fighting sequences are nicely handled though the background scenery in these fights usually drop in quality whenever a fight is occurring. It is also worth noting that the show loves its low camera angle to give viewers as many panty shots as they want and there are even a few lewder scenes scattered throughout the season.

Audio
One has to give FUNimation a lot of credit when it comes to Ikki Tousen: Great Guardians’ English dub. It would have been easy for them to simply recast the characters but instead they gathered up the entire cast from past seasons to reprise their roles in this season. As such fans will be delighted to hear that their characters have retained the same voice actors/actresses and the dub is handled nicely by the returning cast. Of course for those who choose to listen to it, the Japanese voice track is also available. 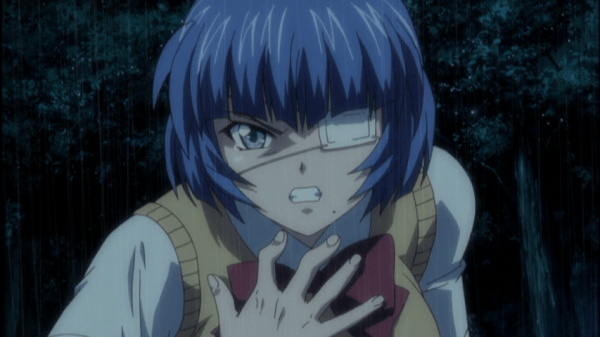 As far as the background music goes, it is rather standard fair for a release such as this, with many basic tracks used for normal scenes and a fitting but generic theme used for the fights. The opening theme is “No x Limit” by Ami and is fitting for the series while “Kage” by Asaha Rio is an enjoyable ending theme that actually is placed to some rather enjoyable artwork which shows a few of the female characters with more detailed designs.

Extras
For the release of Ikki Tousen: Great Guardians we have a number of on-disc bonus features which range from the standard inclusions such as a commercial collection and promo video from Japan, to textless opening and closing songs, and trailers for other FUNimation products to two commentary tracks and two special additions to the release. 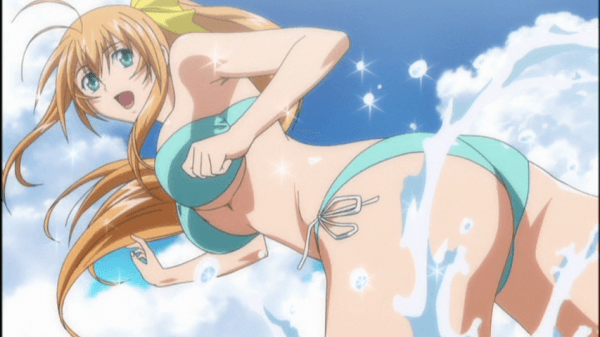 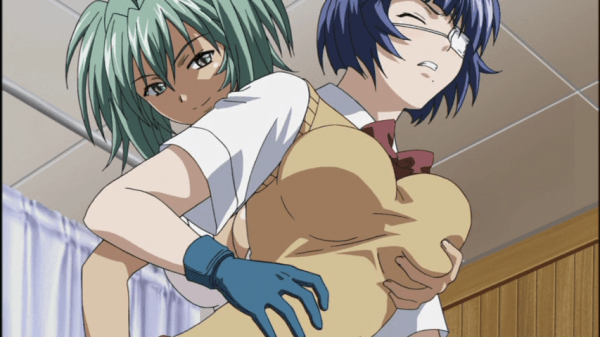 As for the other extras, there is the Great Guardians Radio Event at Tokyo Anime Fair 2008 which is a half hour long event taped from Japan and the Battle Tour Club: Sexy Cosplays, Dangerous Jobs. This is a collection of six mini-episodes totaling fifteen minutes in length presented with a Japanese voice track which sees six different girls from the show in lewd costumes and situations to provide some final over the top fan service.

Overall
Outside of a reduction in the fights, Ikki Tousen: Great Guardians gives fans what they want with plenty of nudity and panty shots while also focusing on characters but there still needs to be some worthwhile structure to keep the season going and unfortunately while the subtle developments involving Ryofu and the forces moving in the background are mildly entertaining, it hurts the series as much as the dated animation does. With a nicely handled English dub, Ikki Tousen: Great Guardians is still a great show for fans but one that ends up feeling inconsequential compared to the first two seasons.