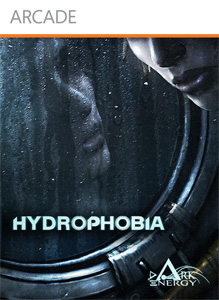 
Story
“Powered by the revolutionary HydroEngine™, the world’s first true fluid dynamics engine for games, Hydrophobia™ is an experience unlike anything you have played before. This jaw-dropping technology models flowing water which behaves completely realistically, resulting in the most dynamic and dramatic gameplay you’ve ever seen.

Engage in mind-blowing “flow combat” where gameplay results in a never-the-same-twice experience. Unleash floating oil fires, electricity, and the power of the water itself to wipe out your enemy as you discover the terrifying truth of the Malthusian agenda—Save the World, Kill Yourself.” [Via Xbox.Com]

You start the game off as an engineer for a ship, when all of a sudden something goes horribly wrong. Something has happened to the ship and it is taking on water fast. Quickly into the game you discover what has happened to the ship and it turns out that terrorists have attacked. The reason isn’t immediately clear, but everything starts to reveal itself as your progress through the game. 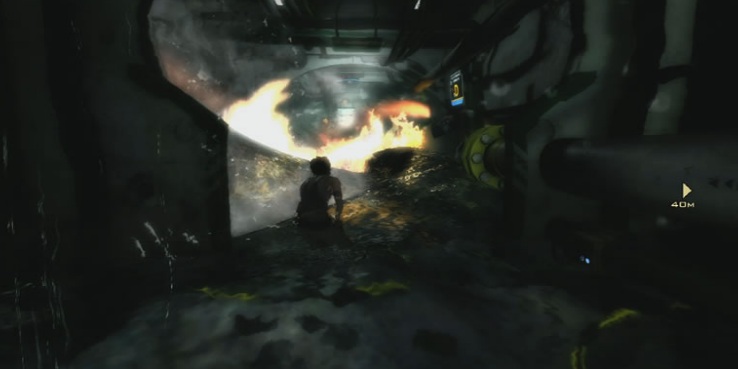 Gameplay
Hydrophobia is not a shooter, it is categorized as an action game for a reason. Use acrobatic skills in order to traverse levels, climb around the ship, and sneak up on opponents. The game supplies you with a stun gun, and a few gadgets but none are actually effective at killing people. Instead you must use these items in order to interact with the surroundings and use the surroundings to kill the enemies.  If you are the type that likes to run and gun through a game, you won’t like this game at all; however, if you don’t mind taking your time Hydrophobia can be a great experience.

The game attempts to speed you along to create a thrilling experience. The music, the characters, and the water itself all seem to make you want to rush through the levels so you don’t die. In truth there is rarely any real rush, the game pushes you along and you might feel rushed but you have plenty of time. While there are some timed areas, they are clearly designated and the rest of the game can be strolled through. I may be wrong here, but I spent hours in some parts just because I’m terrible with directions, and nothing really happened. There are also some swimming parts, but they just require trial and error. I got lost many times while completely submerged under water, which caused me to drown on numerous occasions but I eventually got passed once I figured out where to go.

Audio & Graphics
The audio in this game has its good and bad moments. The voice acting can be occasionally great, but during other moments it becomes terrible. On the other hand I do have to admit some of the humor, however subtle, got me to burst out laughing. For instance, there is this one part where you open up the route you have to take and your “eye in the sky” partner sings the chime from Legend of Zelda (heard when you unlock a door by doing a specific task). The music is also quite nice, and is used in order to give a more rushed feeling (even if you aren’t really rushed, as I pointed out earlier).

The graphics is where this game shines. For an XBLA game, the graphics are great and the water is magnificent. Hydrophobia was built on an engine specifically designed to simulate water, and it shows. As you open doors the water flows between rooms and equalizes out. Waves are constantly hitting your chest and pushing you back. As the water rises your character begins to slow down due to the drag, and then speeds up again as the water levels reduce. This game is simply worth playing, just to check out the water. Seriously!

Achievements
The achievements in Hydrophobia are not really that hard. Overall, it is a pretty easy list and shouldn’t take that much time to complete (depending on how long it actually takes you to beat the game). A majority of the achievements can be achieved in one play through, and the combat ones should come without even trying. Even if you don’t pay attention to them, most of the bad guys are set up in order to give you the achievements anyway. The collection achievements may require a second playthrough, but the game isn’t that long and everything is pretty easy to find (except a few of the hidden documents). The only odd achievement is the “My Hero” Achievement, which stares you right in the face when you get to the part; but you can still miss it because it is a timed event that doesn’t actually stop the progress of your game. Even if you don’t save him, the game will continue (only with some altered dialogue).

Overview
Hydrophobia is a fun game with a superb water engine. The game really just seems to be a game designed around the HydroEngine, and this isn’t a bad thing but it seems too much focus was put on showing off the water. The water effects and the seemingly impending doom as the ship is sinking creates a psychological response that is thrilling and satisfying. While the combat gets repetitive and annoying, and there isn’t actually any rush to playing the game; Hydrophobia still offers a complete experience that is enjoyable. I just wish the game hadn’t ended so abruptly, I just didn’t feel like I accomplished anything at all and left me with an empty feeling (which was partly filled up by a playthrough in the challenge room). Check out the demo when it releases, even if you don’t plan to buy the game you should totally check out the water engine in action.
I give Hydrophobia