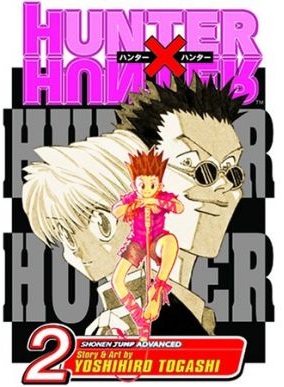 Overview:
The hunter exam continues in this volume and Togashi begins to peel back some layers and reveal what is underneath it all, what I found though is somewhat disturbing. There is a darkness underneath the surface of Hunter x Hunter and some horrifying acts of ultra violence are proof of that, but it never feels out of place or as though it were a mis-step. What this volume explores is not just a continuing quest to become a Hunter, no no no, it’s far deeper than that. What we have here is Togashi exploring the value of life and that harsh brutality of both our world and that of his creations which mirrors our own, yet slightly distorted. 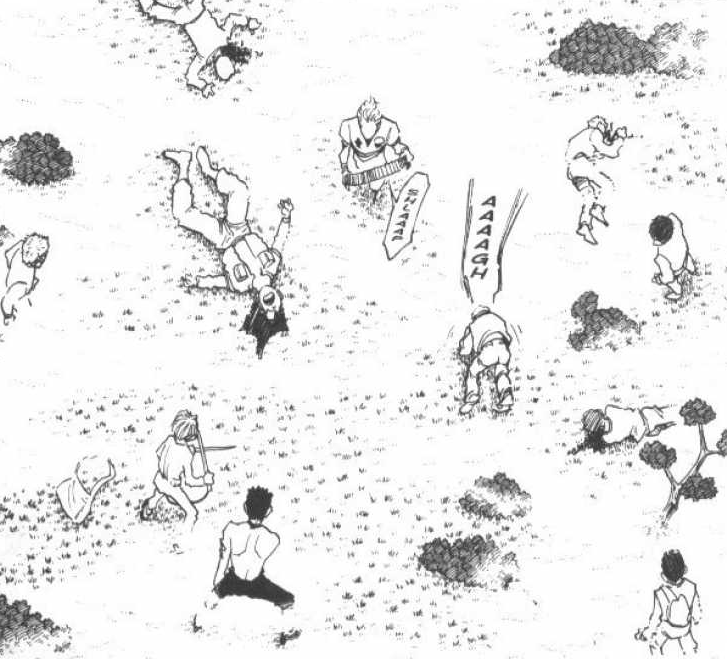 The world of Hunter is extremely brutal, but it seems to be more a commentary on our own world and the fact that people don’t ever think about their own mortality. Yes we all know that one day we will die, but we never stop to think of how fragile we truly are. Through Hunter x Hunter volume 2, Togashi conveys the frailty of life to perfection.

There is an abnormally high death toll in this series which on the surface and cover art appears to be a fun adventure about a kid trying to become a hunter. But to me that is saying something, so often do we have characters being near invincible and rarely are faced with their mortality where as in Hunter, death is all around them. There is always something threatening the protagonists life, whether it be beasts, traps or psychopathic hunters. Hunter x Hunter does not shy away from the heavy stuff, with some deaths depicted quite violently. Yes it’s disturbing, but there is substance to it all that makes it a cohesive piece of art, and that is exactly what Togashi has created here – a work of art.

Story:
Volume 2 of Hunter is rather interesting in the way it tells it’s story, we get the continued tasks of the exam but with a rapid shifting of moods between each chapter. One chapter we have a light-hearted cook-off challenge, mainly played off for laughs, the next we have a 12 year old child brutally dismembering characters for simply accidentally bumping into him. It is all rather wild and does indeed give the person reading mixed feelings. I noted that some people may find it disheartening to see such a young child who up until now seemed like a cutesy companion to the hero, suddenly performing the most horrific act seen thus far in Hunter x Hunter. But it all flows with the story and we get a hint at a much darker past for him. Killua is his name and as he seemingly jokes to the hero, Gon, he is from a family of assassins. You don’t think much of this until he proves it true a few pages later.

This is what Togashi is rather brilliant at. He can provide some information which at first we disregard, then suddenly it comes back up like a flash to reveal what we had disregarded to be pivotal to the story and it’s characters. It is just perfectly executed foreshadowing on his part and it works out better that we aren’t left waiting for the pay-off of the foreshadowing. He makes sure the idea we disregarded is still clear in our mind and then lets out the big reveal. This is were many other series fail, they provide the information yet, it does not become pivotal until you have forgotten or do not care about it any longer. Togashi has obviously realized this common trapping of many manga series and chose a much better path with Hunter. 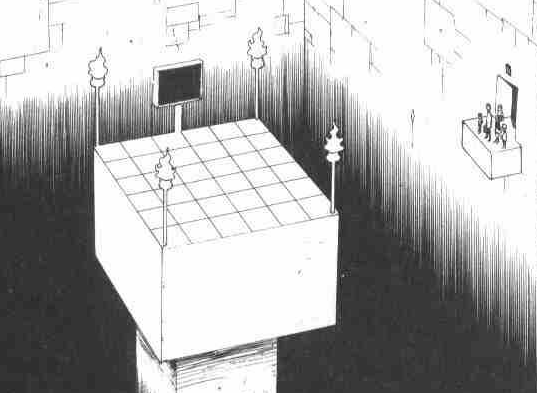 This volume ends in a scene reminiscent of the Fortune Teller Baba battle in Dragon Ball, a clear homage to Toriyama’s work. We have a dank dungeon-like arena with little room to fight with each team member heading in one by one to battle in a best of 5 match-up. Along with the threat of the chance of the characters falling to their deaths, it’s both ostensibly very Togashi-like and very much so a homage to Toriyama that would fly under the radar of many readers. We end this volume with 1 win to each side and time wearing thin, the tension has been built for a blockbuster volume 3.

Characters:
Togashi continues the trend of impeccable characterization from the first volume here, with the focus shifting now to that of Killua and Hisoka, revealing more of their intentions and personalities. That’s not to say the focus characters of volume 1 take a back seat here. Gon, Leorio and Kurapika each have there own moments to shine such a when Gon becomes the first and only person to land a hit on Hisoka, which both thrills him and horrifies him. To his surprise Hisoka, reacts with respect and allows Gon to live. It was a great moment that resonates with the audience whom feel the same thrill and horror as Gon and the same relief when Hisoka reacts with respect.

It is a great volume for characters as we are introduced to several new characters such as the old master Netero and the gourmet hunters (I swear Toriko stole the idea from here!) Menchi and Buhara. But the real stand-out for me was definitely Killua, which I have to say is the most literal naming of a character I have seen in years. He is an assassin and has “Kill-U” in his name? I find that both humorous and rather clever. It’s another example of Togashi’s fore-shadowing even though it’s a much lighter example than some others.

Artwork:
The art has maintained the same level of quality as the first volume, perhaps surpassing it in some cases. I expect it to continue to improve over the series, that’s not to say it needs improving, but as Togashi comes more and more into the thick of it, the art will naturally develop. But what we have now is simple and detailed, 2 things that a lot of manga lack. Being simple allows easy understanding of what is occurring. Being detailed allows for another depth beyond what is simply the focus of the piece. Rarely does a manga series accomplish this, Hunter had accomplished it from the first chapter of the series, heck even the first panel.

There isn’t much else to comment on besides the fact that the fights are wonderfully composed, and really give the sense of action. Nothing is worse than reading a fight in manga that seems so stationary, fights need movement and action, Togashi achieves this like it is second nature. I look forward to see what else he has in store with the artwork for future volumes.

Overall:
Hunter x Hunter volume 2 is an excellent volume of shonen manga. It has action, emotion and depth beyond easy comparison. It begs to ask many questions, such as the nature of what it means to be alive and even the very virtue of cherishing life itself. Togashi tells us through Hunter that those who do not cherish life will regret it. We are all mortal, some of us are too blind to see that. It is all done in good taste and never becomes preachy. What it does become is a work of art and boy is it something to behold.

In conclusion; Hunter x Hunter volume 2 is an exceedingly compelling volume of the series and provides much food for thought and continues what is no doubt one of the greatest manga series of the past decade.  I can not recommended the series and this volume enough, but I must say: this one is not for kids, not in the slightest. It is very violent but not without reason. Read it at your own behest, if you aren’t a fan of blood and violence. But I implore you to read regardless, it’s a must-read series, not just for manga fans but for nearly anyone.

I give Hunter x Hunter volume 2: