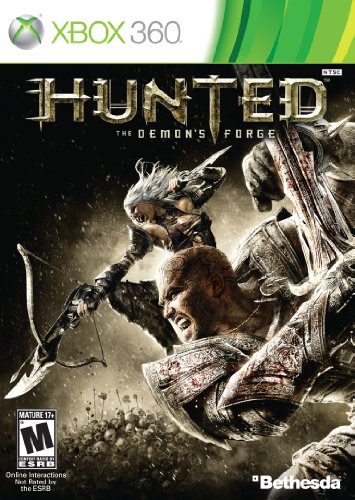 Overview:
Your standard dungeon crawling experience usually involves at least one character that will make their way through a number of dungeons either in the search of some powerful artifact, or an expensive trinket or even to defeat a creature that can destroy a world.

Now dungeon crawling games have been on the lull lately, and after years of other titles being released, Hunted: The Demon’s Forge has been released by inXile Entertainment and Bethesda. This dungeon crawling experience places the player in a world where dungeon crawling has been mixed with cover based shooting. Now these two things usually never mix, so does this mixture create a new and unique experience or something that should have been better left separated?

Story:
Players will be taking control of either one of two heroes, Caddoc and E’lara. The two are a group of mercenaries that will sell their swords to whoever can pay them the most money. Caddoc has long been having visions of a mysterious white skinned woman and suddenly, the two stumble upon her. Seraphine is her name and she has a quest for these two heroes, but this quest is just the start of things to come as a dark cloud of evil begins to show itself the further these two unlikely heroes journey on their quest.

Unfortunately the storyline for Hunted: The Demon’s forge is rather forgettable at times and you will usually find it difficult to justify the way that you are constantly being led from place to place without much of an actual explanation other than that there is money at the end of the tunnel. The storytelling is rather underwhelming and for a dungeon crawling title, a story is usually the backbone. 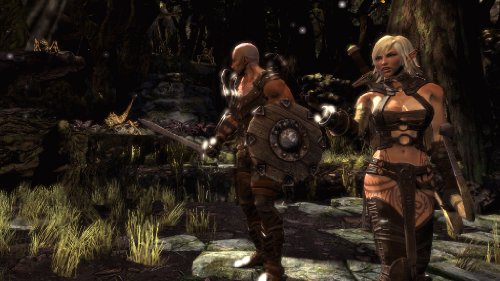 Your actual enjoyment of the storyline will most likely come from the interaction between Caddoc and E’lara themselves. Caddoc, despite being a large muscular man is the more levelheaded and calm member of the team while the elven E’lara is hasty, prone to destroy things and plays a great comedic role most of the time. The relationship the two have with one another is the best thing about the story in Hunted as they often mess around with one another in enjoyable and sometimes comedic ways that will leave you wanting to keep playing simply to see what they will be saying next time.

Graphics:
Hunted: The Demon’s Forge unfortunately does not impress visually. There are a few pieces of the game where you will be truly surprised by the environment that you are playing in, but for the most part all of the levels are designed around a color palette so dark that you will find most of your time struggling to see the area around you. While this does provide the dark visual aesthetic that I believe that the game is going for, it also is inhibiting to the players so that they cannot actually enjoy the world around them, instead venturing through rather samey looking areas multiple times in the same chapter.

The characters and enemies themselves are rather impressive looking at first. E’lara and Caddoc can be covered in blood from fighting close range and even dirt and grime from venturing through a dark dungeon for an extended period of time. Unfortunately these effects usually always appear the same way which means if you have seen it once, you’ve seen it all.

Another complaint is the fact that the character animations are very painful to watch at times. During cutscenes the different characters usually look well enough, however during actual gameplay you can notice that the animations drop significantly. This is especially noticeable during the Executions that the game offers. If you are playing as E’lara then you will often get the chance to perform an execution on an enemy, but you will be lucky if one out of a hundred will even land properly. Instead of dying in a hail of arrows, your enemy will simply twitch around and fall over, with slow motion arrows still flying through the air after you are moving forward. Also… E’lara is certainly going to be a bit of a fan favorite thanks to her rather revealing outfit; though it can be forgiven thanks to her agile character base that she needs free movement. 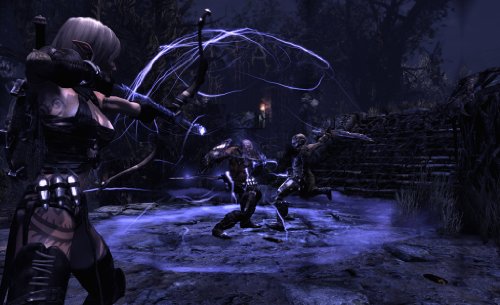 Audio:
The atmosphere for the title is well set by the simple dungeon like sounds you will hear inside of any given area, or the whispers of a human survivor going insane off in the distance. Unfortunately besides setting a little bit of atmosphere, the soundtrack is forgettable and players will be wondering if there even was music after they have finished an area.

The character’s voice actors do a good job representing each character. Seraphine is voiced by veteran voice actor Lucy Lawless so there is a little bit of star power. E’lara’s voice actress is rather impressive as well as the lucid tones of her voice help set off the environment quite nicely. This is another example of the biggest highlight of the game, Caddoc and E’lara’s interaction with one another. Their banter is well voiced and you can easily derive each character’s personality simply from the way that they talk.

Gameplay:
Hunted: The Demon’s Forge’s gameplay centers around either melee combat or long range combat and each of the two main characters are capable of performing both. However each character also has something they are good at. It comes as no surprise that Caddoc is a powerful warrior that can perform at his best at close range with hand to hand weapons while E’lara uses her bow to pick off enemies at a distance and provide support to Caddoc.

Of the two characters E’lara seems to be the better fighter, simply because she can deal damage very rapidly and also because the melee combat in Hunted is a bit under refined, with most close up battles resulting in a pile of enemies crowding around you. Also it helps because if an enemy is equipping a shield, E’lara can easily deal damage to the enemies head, legs or back by flanking around the enemy. This works best especially with two players as the second player can draw the enemies attention as Caddoc while E’lara whittles away at them from behind.

E’lara’s bow and arrow is also quite strong thanks to the fact that arrows are extremely plentiful in the game, with most enemies dropping arrows often and arrows usually laying around in heavy fight areas, you will usually never run out of arrows to fire at enemies.

Earlier I mentioned that the game is a mixture of action adventure and today’s standard shooter. This is because the game features a cover mechanic that allows the player to take cover behind low walls or corners and then pop out to shoot arrows at enemies on the other side. The mechanic works well enough, but this works well only with the slower long bows that E’lara can use, rather than the more enjoyable fast paced bows that can pick apart enemies at close range as long as you take advantage of E’lara’s agile form and dodge out of the way of their attacks. 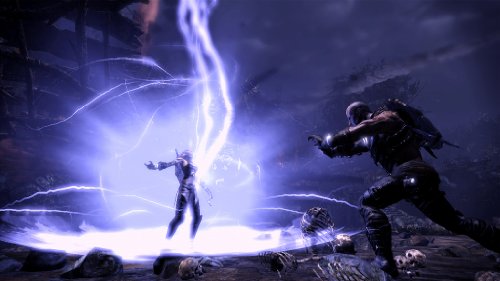 Besides the standard attacks of each character, the player can also collect crystals from containers in the environment as well as downed enemies. These crystals can then be given to Seraphien through portals scattered around the level and used to learn magic powers and attacks. E’lara can learn special arrow type attacks such as explosive fire arrows and freezing arrows while Caddoc can use whirlwinds to lift enemies off their feet, go into a rage and also charge through enemies. Besides these abilities unique to each character, there are also three battle spells that both characters can use. These spells are a sigil, a lightning spell and a fireball. These skills can also be used to battle charge your partner and give them an extra damaging boost.

Outside of leveling up their powers with crystals, players can also fulfill in-game objectives to improve their abilities. This includes performing lots of kills with either a bow or sword and doing extra damage thereafter, or reviving your partner allowing you to carry more revive potions. A number of these upgrades are useful and easy to come by but don’t really flesh out any legitimate character customization.

Besides combat you will also occasionally stumble upon a puzzle that can be completed or left behind if you so choose it. Some of these puzzles may sound deep at first but usually just involve following an optional path for a while and then looking around you for a quick and easy solution, usually shown by pressing B in the right area. The rewards for this are either Gold to unlock things in Crucible mode or a powerful weapon that is enchanted to do extra damage. Problem with these weapons are that they do significantly less damage when their charges run out and until you get further in the game you will be stuck carrying only that weapon without being able to switch it aside for later. 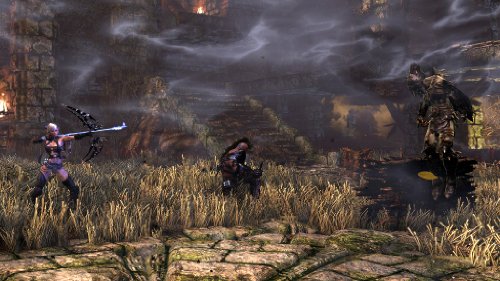 Outside of the campaign mode there is the Crucible mode which allows players to make their own dungeon and share it with the world. It also allows the player to create their own experience and venture through it with friends or on their own if they feel like it. Unfortunately the ability to actually make your own individual experience each time runs out quickly and you are unable to keep your main characters from  the campaign which is only a minor let down compared to the extreme let down from individuality.

Now Hunted: The Demon’s Forge is primarily meant to be played as two player co-op either locally or online. Local co-op divides the screen horizontally and unfortunately makes the screens rather small to see what is happening. In a game such as this, vertical split-screen may have been the best choice. If you happen to be playing with the AI partner however, you will find yourself frustrated more often than not.

Your AI partner will often run to the nearest weapon rack and smash it before you get a chance to do so, stealing the weapon inside while also standing in the way of your ranged attacks which makes them nothing more than a glorified pin cushion. I also experienced a situation where my character had been downed and my AI partner needed to revive me. I could clearly see two revive phials on his belt but he simply stood there and let me die, reverting me to the last check point for no reason.

Online co-operative mode works rather well but it does not have a number of features which could have made it a much more enjoyable experience. First and foremost there is no drop in or drop out option. This means you will often be finding yourself making sure you have a trustworthy partner and unfortunately your friends can’t jump in mid-dungeon which is a curious game mechanic to have to say the least.

Overall:
Now Hunted: The Demon’s Forge has plenty of opportunities where it could have been a great game and a new evolution of the action adventure genre. Unfortunately due to a number of half polished and questionable design choices the game does not deliver with what it could have been. Demon’s Forge is still an enjoyable experience for the most part and can deliver a decently long gaming experience but falls short in a number of areas that could have made it a great game, instead of a decent one.

I give Hunted: The Demon’s Forge