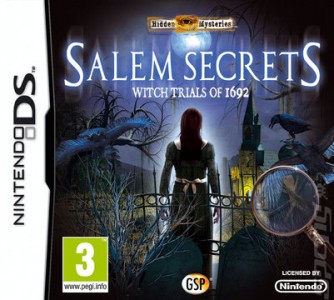 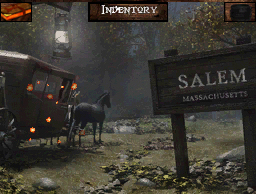 Another entry under the ‘Hidden Mysteries’ heading, Hidden Mysteries: Salem Secrets takes the hidden object/point ‘n’ click adventure back to the 1600’s, a time when the streets were ripe with superstition and infamously cruel witch trials were going on based on nothing but suspicions. It’s a completely standalone adventure; the Hidden Mysteries prefix hints at the nature of gameplay and the team behind it, but not having played others in the series doesn’t affect your understanding of the story at all.

The date is 1692 to be precise and you play Constable Hawthorne, an inspector sent by the Governor of Massachusetts after some reports of mysterious activity and four of the young female townsfolk going missing under strange circumstances and returning only to suffer from bizarre fits and tantrums. Rumours have been circulating that these girls were victims of the misdoings of a local practitioner of witchcraft, and you are tasked with finding the truth amid the hysteria of superstition in the sleepy town of Salem. 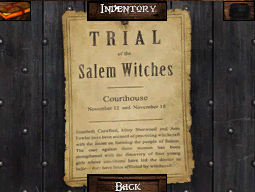 From the start, it is made clear you aren’t welcome. Constable Hawthorne arrives to empty streets, with only signs giving you notice of a recent funeral, declaring a quarantine zone and threatening any visitors attempting to trespass. It’s at least half an hour’s worth of play time before you even meet anybody, which even then is one of the afflicted you stumble across. Using the frequent hidden object scenes to gather useful objects as you explore Salem, you must cure all of the four girls along the way by finding a solution to their problems, then solve the mystery behind the events.

The story starts off very slowly, and while this generates a high level of curiosity inside the player, it isn’t fully capitalised on in that the story never does get going, meaning you were mistakenly interested for no real reason. It remains uninteresting throughout the four long-winded chapters until the very end when the mystery is concluded, featuring the twists and turns of any good tale of a mystery investigation. 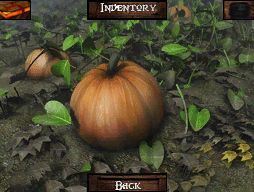 The hidden object scenes themselves can sometimes be a little dark due to the setting of your adventure, making it hard to distinguish objects from their surroundings, but still, these screens remain one of the clearer examples of the genre. Given the level of clutter present on the screen at these times, the game does well to let you see fairly clearly by having a straight-forward, static 2D visual style instead of trying to animate any of the items.

However, at first there seems to be a variety of scenes to search, but as you progress, you realise you are revisiting the same locations. The developers haven’t even bothered to adjust the arrangements of the objects, with exactly the same layouts second and third time around, just with a rearranged list of objects to find. This links in with the problems of the map and the way you are constantly going back to the same places. Salem is large in scale in that there are loads of paths to take and places to explore – such a vast environment, however, is difficult to comb for evidence and with most of the buildings and physical representations of the lanes looking similar, it is disorientating, very easy to get lost and difficult to find the place where you’d like to be even if you know where you should be going. 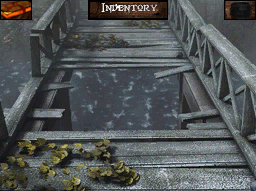 As well as the hidden object levels, much like other games in the series you are presented with a more traditional style of puzzle that asks you to think about it and work it out, rather than randomly hoarding selections of objects just to find a single useful utensil or missing piece. In contrast to the regular hidden object puzzles, though, these are few and far between, cropping up only occasionally. There are 10 mini-game type puzzles in total, but taking into account that no explanation is provided each time, you may be forced to use the ‘skip’ function on some, subsequently making the limited number available even lower. 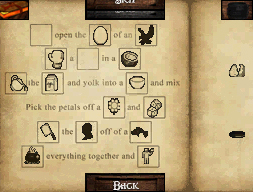 Hidden Mysteries: Salem Secrets holds similar production values to others in the series. Like the rest of its family, it possesses negligible sound: it’s just a dreary piece set on a loop. But, due to its safe attempt in the visuals department, it ensures levels and puzzles are easy to see, something which surprisingly isn’t the case for a lot of hidden object games. The nifty autosave system which records your progress after each in-game event removes the worry of tracking your data manually; the choice of four save slots even allows family members to start their own separate data files. It’s not the strongest instalment under the Hidden Mysteries branding, but it’s another point ‘n’ click adventure which leads stages onto one another logically, even though the story is a little weaker this time around.

To be in with a chance of winning a copy of the game, leave a comment below. One comment entry per person. Open to residents of Europe only – apologies to our  readers from elsewhere around the world!