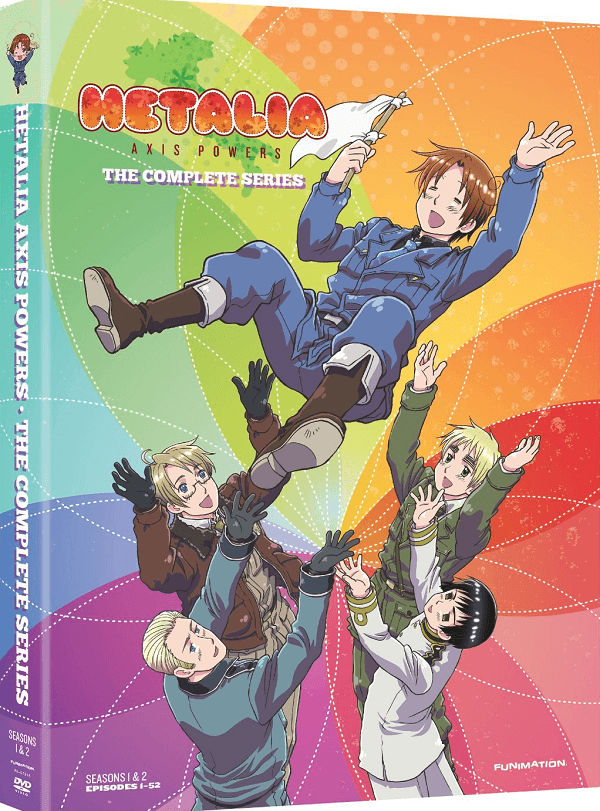 Overview:
Stereotypes can sometimes be a terrible thing. However these stereotypes can sometimes be used for some of the best lighthearted humor around. This just happens to be the case with the Hetalia series as a whole. With its unique origins as a Japanese webcomic, turned manga turned animated series, Hetalia has become quite a hit in Japan and gained even more popularity in the West.

In fact we have already seen the release of a movie called Paint it, White! and the start of the Hetalia World Powers series, the reviews of these can be found here and here, released here in North America. But what about the release that began it all? FUNimation has released a collection featuring the complete series of the Hetalia: Axis Powers which combines the previously separately released Season 1 and Season 2. Does this unique brand of humor still deliver? Let’s find out.

Story:
Hetalia is a bit of a strange show to say the very least. The main story focuses on the various nations who took part in World War II and the various events which occurred around that time period, both pre and post war. However rather than focusing on the events of that occurred in those nations and how it affected people, Hetalia creates literal personifications of each country. These personifications include practically every stereotype imaginable for the country they are named after. However this works immensely in the show’s favor as many viewers will find it hard to not laugh at least once every couple of minutes. 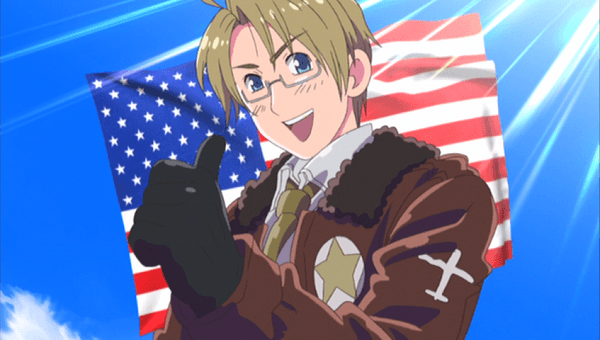 Considering Hetalia focuses around the nations involved in World War II, most of the nations included are those who were in the Axis Powers (Italy, Germany and Japan) and the Allied Nations (America, Britain, France, China and Russia). However most of the attention is focused on the hilariously cowardly and accident prone Italy and Germany who constantly tries to take care of Italy because he is his first and only friend. These two are given some of the best arcs of the series simply because their personalities are near polar opposites of one another.

Each nation’s personality can play a bit off of their pasts, such as America always trying to be in charge and taking credit for everything, France being weak and blaming others for his failures, Britain’s inability to cook, Japan’s passive aggressiveness and standoffish nature, Russia’s creepy statements and more provide plenty of gags. Every nation has miniature storylines of their own which usually only last for a few minutes but often pay off in laughter.

However there are a number of longer storylines which run alongside these mini-stories and can span multiple episodes, though this is usually because they will only take up a minute or two of that episode’s time. One of these is Chibitalia, which is focuses on when many nations were still young and Italy was just left behind after his Grandfather Rome disappeared. The Chibitalia storyline actually runs the longest out of all of the story arcs presented in the series, as most of the five minute episodes provide simple laughs that include a multitude of various nations. 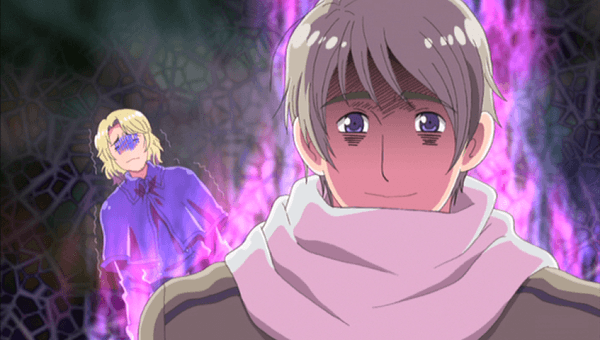 Nearly everything in Hetalia is done with plenty of comedic humor, but obviously some people may find themselves a bit offended if they can’t take some light ribbing about the various countries. Also considering the fact that a large amount of the comedy is based off of historical events, those who aren’t familiar with their history may not understand a joke’s set-up or even the joke itself.

Visuals:
Unfortunately the fact that Hetalia was originally shown in Japan as a webshow only, the series features some rather large drops in quality at parts. The main characters look great for the most part and follow your standard stereotypes as far as appearances go. However there are plenty of times when the animation will become super deformed into white blobs with faces or appear chibi-like in an effort to sell the humor. 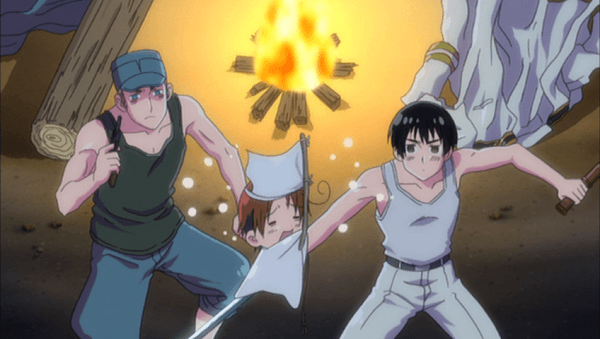 As a whole the series also tends to re-use the same simplistic backgrounds quite often and in fact there are plenty of scenes which are actually replayed over and over again in the same exact fashion. These recycled scenes may be interesting at first as the viewer will be curious to see if anything has changed, but after the fourth time it becomes disappointing.

Audio:
As one may expect with a FUNimation release, Hetalia Axis Powers: Complete Series comes with both the original English dub and the Japanese dub. However these two voice tracks are as similar as night and day in their quality. While the Japanese voice work is adequate enough, one of the most humorous parts of Hetalia is the fact that all of the characters have been given accents which match with their nation. These accents can provide a quick laugh all their own. As such, the English voice actors pull off these accents nigh flawlessly with only a few small inconsistencies here and there. 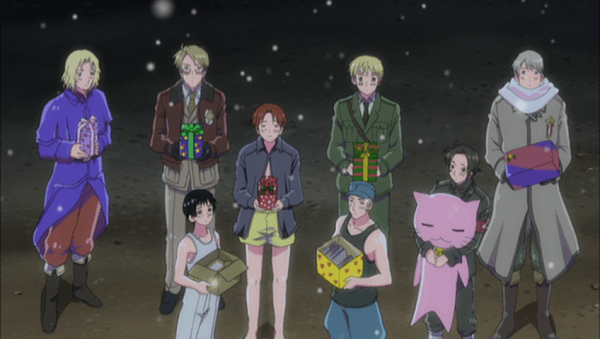 Over the course of the fifty two episodes included in this package the ending music changes between three different tracks. Each of these ending songs features one of the Axis countries, usually Italy, singing in Japanese, with light-hearted and comedic lyrics. There are also a few English songs included as well, sung mostly for comedic purpose in the first half of the series.

Extras:
With this release of the Hetalia: World Series Complete Collection there are also plenty of extra features to go along with the standard content. FUnimation has provided audio commentaries for the following episodes: 2, 9, 12, 16, 31, 36, 42 and 46. These commentaries add more to the humor of the original episode as we get to listen to various members of the English cast voice their opinions of the show and discuss various inside jokes. 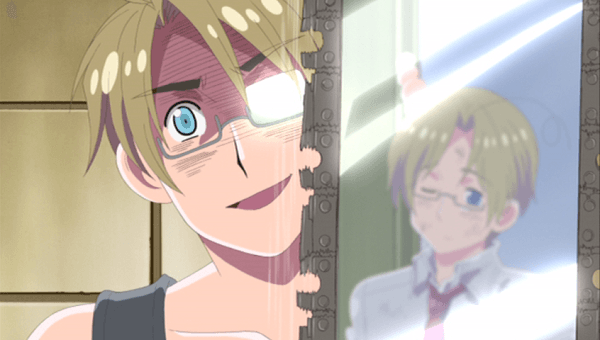 To go along with these English commentaries there are also plenty of Japanese extras as well. Each of these Japanese extras such as comments by the Japanese Director Bob Shirahata or talk with Japanese voice actors are in Japanese with English subtitles only, which can provide a decent amount of enjoyment for those who love Hetalia, but overall can be passed over with ease.

Overall:
Hetalia Axis Powers: Complete Series gives newcomers to the series perhaps the best option to find one of the funniest anime out there. The two seasons contained in this release present fifty-two five minute episodes that will leave you in stitches before you are even done with the first disc. With the massive amount of humor pouring out of the screen there are jokes for everyone, including people who enjoy sight gags, historical jokes, puns, and more. While a lot of scenes are replayed, most likely due to budget reasons, the amazing English voicework keeps each episode fresh and humorous. As it stands Hetalia may be one of the most hilarious anime out there and viewers will be doing themselves a disservice to pass the series over.