How Far Will You Go To Save Someone You Love?

That’s a pretty hardcore question.  Would you kill to save your loved one ? Would you die to let them live ?  The possibilities are endless, is there a right or wrong decision ? what are the repercussions after you’ve performed these actions ?  Well these sorts of choices are what you will need to make plus many more in Sony’s new psychological thriller filled with innumerable twists and turns, where choices and actions can result in dramatic consequences.  Welcome to the world of HEAVY RAIN !! 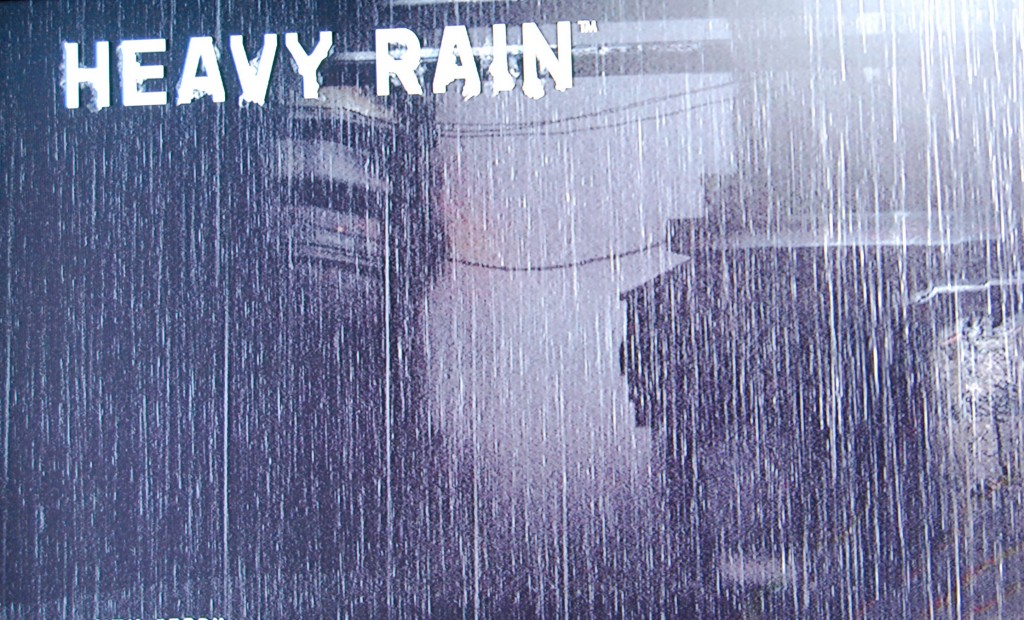 Heavy Rain is by far one of the most interesting games I’ve ever come across.  A mixture between a game and a film with great gameplay, brilliant graphics and superb audio, where you control four main characters, spanning over four days (within the game) filled with mystery and suspense as they all attempt to track down a murderer known only as the Origami Killer, a name given to him/her by the calling card they leave behind in the form of a folded paper origami shape at the crime scenes.

Let me start off by saying that Heavy Rain’s storyline has a total of 23 different endings.  I don’t believe any other game currently available at the moment comes even close.  Not even interactive movies have that many possible endings.  This certainly provides players with a different experience nearly every time.  With every choice you make, the storyline will go down a specific path, and it will make you think… did I pick the right option ? did I ask the right question, should I done this that way or this way.  There are too many possibilities, but the great thing is at least you know that Heavy Rain has a huge amount of re-playability value, which will drag you back to play it again and again to see how the story ends in a different way.

The Four characters, each following their own leads and with their own motives, must take part in a desperate attempt to prevent the killer from claiming a new victim.  The storyline of the game is complex and very impressive. The four characters you control all have their own strengths and weaknesses.  Ethan Mars who we see at the beginning of the game waking up, spending time with his kids and enjoying his daily life, just seems a little to good to be true.  This is the calm before the storm, and let me tell you the storm hits and it hits pretty hard on poor Ethan,  Ethan is asked to prove how far he would go to save his son, by taking on a number of tasks set out by the Origami Killer.  Whilst Ethan is proving his worth we also have Scott Shelby a private detective, who is trying to gather details on the origami killer by interviewing parents of the killers victims. Next we have Norman Jayden a FBI profiler with some ultra cool gadgets, Jayden is sent in to assist the local police with their investigations, if you enjoy crime scene investigations and searching for clues then Jaydens character is perfect for you.  His sci-fi style ARI (Added Reality Interface) is something I’ve never seen before but works really well with his character and in finding clues to help gather information.  Finally we have Maddison Paige a chronic insomniac who’s riddled with bad dreams, and can only find sleep whilst in cheap and seedy hotels. But also enjoys hot steamy showers 😉 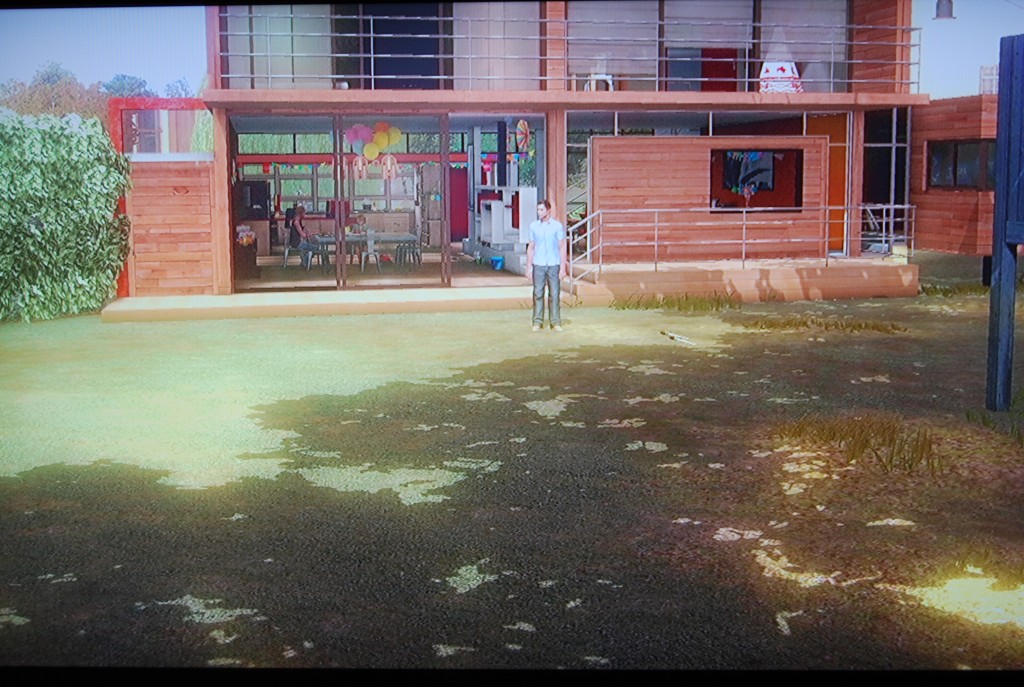 During the course of the game, any or all of these four main characters can die.  Depending on your choices.  If by any chance one of the characters die, the main story will continue, but the dead characters chapters that would of been available will end.  Whilst playing their deaths will be referenced within the game but the game will continue to play out to its final climatic conclusion,  I know a few of you are probably thinking.  What happens if I kill them all off before the actual game ends… what then ? Do I have to start from the begining ? Well Quantic Dream have also covered this base quite nicely as well. If everyone does die by the choices you select, there is an ending that also ties up everything very neatly, and the game ends. Probably not the best ending to have but an ending none the less.  (NO SPOILERS)

The control system takes advantage of nearly every available option that the Playstation 3 controller has.  True hardcore vetrans that sleep with their Playstation controllers under their pillow will have absolutely no problems what so ever with the game mechanics and controls.  Predominlatly Heavy Rain incorporates simple and at certain times very challenging button press/quick time moments, where you will need to learn and master the the playstation buttons.  If you’re new to the controller, then I’d recommend becoming familiar with it, map it out in your head, quiz yourself where all the buttons are, including the triggers, then when your ready to take the test turn on Heavy Rain. 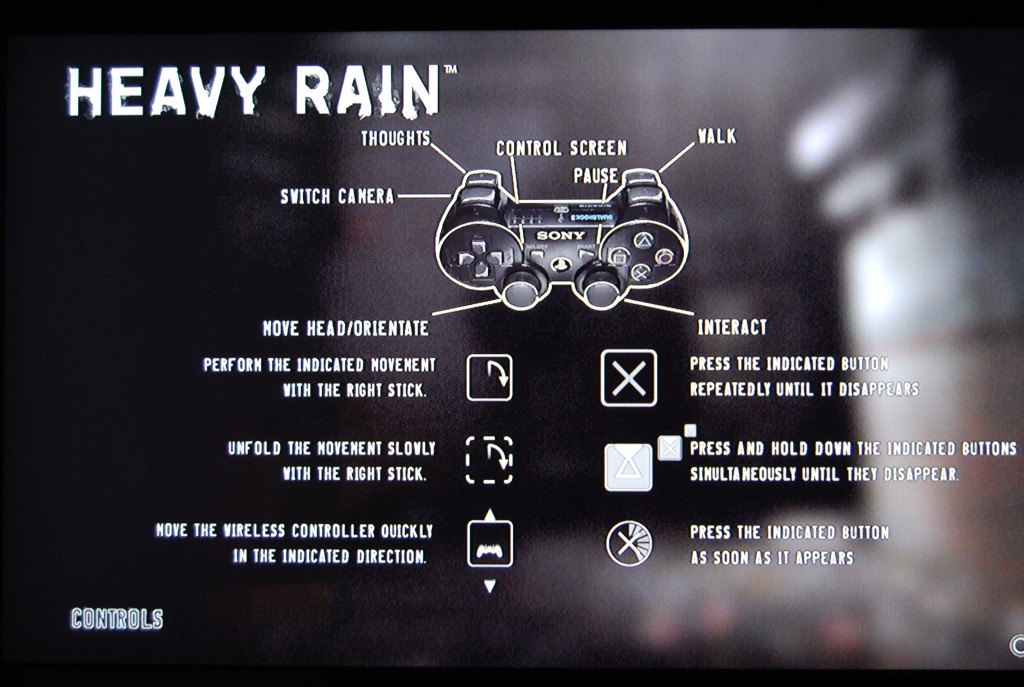 Moving around is the easiest part of the game, holding down R2 will make your character walk while the left stick will move them in the direction you choose.  It’s a little fiddly to get used to at first but it soon becomes second nature,  you can also move the characters head by simple moving the left thumb stick left and right to interact with items.  As explained things get a little tricky when you start interacting with objects and puzzles.   For example an early scene has you climbing up a muddy and very slippery slope.  To climb up involves the player to hold down a series of face buttons such as holding down the X then whilst holding down the X you need to start holding down the Square button, then once you’ve done that release the X and press and hold down the Triangle.  This sort of action is just one example, which is a little tricky at first but will become easier over time.  Other such moments will have you repeatedly pressing the the face buttons to overcome specific situations like a struggle between your character and an an enemy.  Other moments have you shaking your controller left and right or up and down to open a drawer or to shake a bottle of orange juice you’ve taken our of the fridge. (yes even in games we still drink out of carton)

One new option never seen before in any game I’ve come across is the characters thoughts,  something that most of us completely forget about whilst playing on your first run through.  The characters thoughts are available to us by pressing the left trigger.  If the character has thoughts in his mind then words start floating around their head, to initiate these thoughts a face button is associated it to it, pressing that face button will make the character think to himself or ask questions to a non player character in the game.  There are certain moments where questions must be asked and this is where you  have to react very quickly to pick them otherwise they will just like in real life, you run out of time to ask it and the character your asking the question will not want to answer you anymore.  So reaction times are very important if you don’t want to miss out on asking that specific question.  Once again a keen reflexes and button familiarization is recommended. 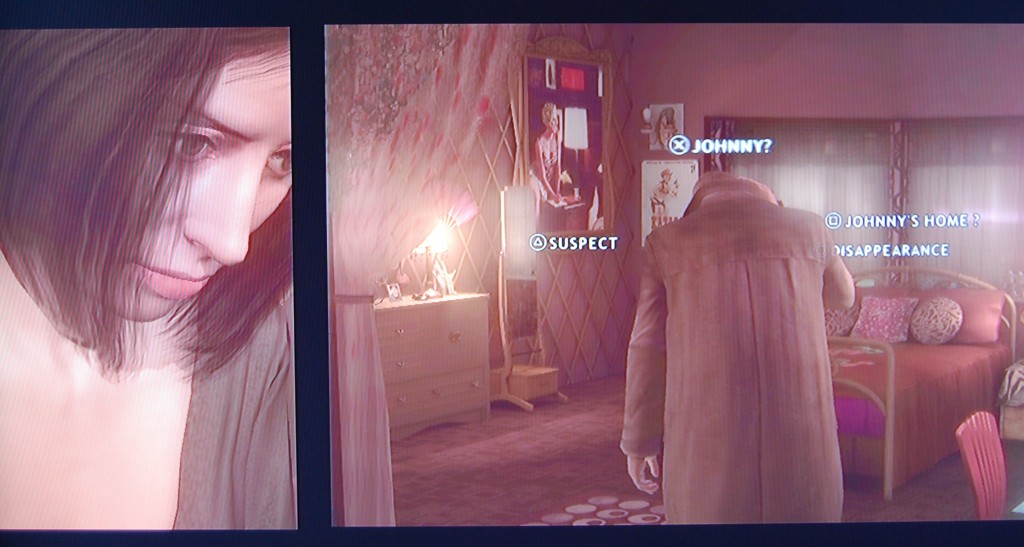 With every game there are some good and bad points.  With all the great points out of the way, I’ll go through some of the darker points.  Graphically Heavy Rain looks brilliant, but in certain moments, lip-synching and character models look a little average, the voice acting is not 100% but this is mainly due to non-english speaking actors used to cast the game.  The control system even though is fantastic does takes a bit of time getting used to, if your new to the Playstation 3 controller.  It’s recommended learning where each button is located as you’re going to need them for the multitude of quick time events/puzzle/object interactions that the game throws your way.

With these little hiccups out of the way.  I have to say that I have never played anything so epic, momentous or revolutionary as Heavy Rain.  Quantic Dream have done a fantastic job at introducing what I believe is the next step forward in the world of video game storytelling and interactivity.  I hope we see many more games such as Heavy Rain moving forward from other developers and I cant wait to get my hands on the episodic DLC for the game.  Just when you think you’re done with the game Quantic Dream have more Heavy Rain episodes planned. Stay tuned for them to appear via the PSN store in coming months.