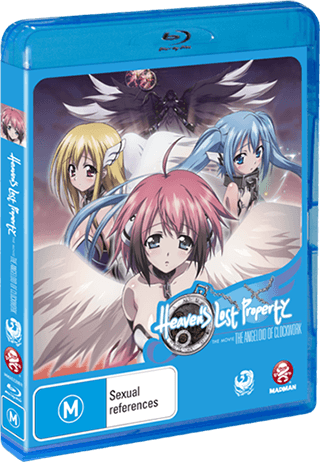 Overview
Heaven’s Lost Property, also known as Sora no Otoshimono, is a popular romance series known for its harem elements with plenty of fan service. Its popularity is suprising too, given how Madman has brought us both seasons and the movie in virtually record time.

After two seasons of ecchi-harem fun, we have this movie which is part-recap but also offers a new look at the tale through the eyes of a side character, Kazane Hiyori, and her feelings for the main protagonist. Is this what fans of the series wanted?

Story
As a movie tie-in to an established series, it’s almost mandatory for you to have seen at least a season of Heaven’s Lost Property. It assumes you know about the world, characters and relationships as the antics resume straight away. Now that we have prerequisites aside, let’s dig into the story that we’re left with. 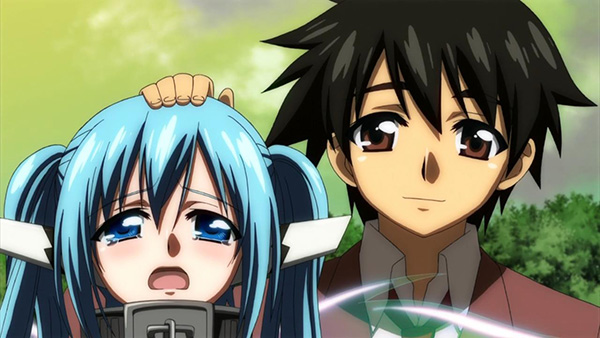 Sakurai Tomoki is once again the centre of attention as he tries to balance his ideal ordinary life with the three Angeloids introduced in the first season. Ikaros, Nymph and Astraea are powerful yet submissive entities who are typically controlled by a master and happen to be well-endowed. Throw a jealous childhood friend, Sohara Mitsuki, and Sakurai’s perverted nature into the mix and you have a harem circus. Things launch right into hilarious antics, which was unexpected as they were genuinely funny and wove a few references to other classic anime. 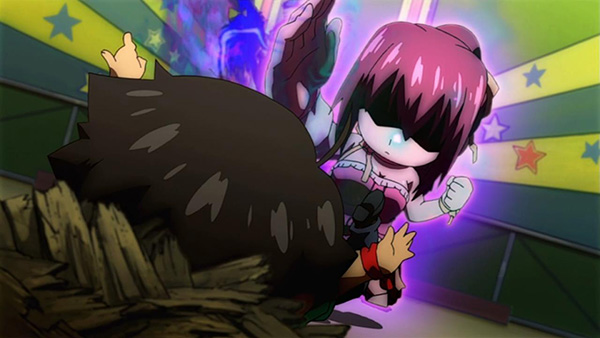 The first half of the movie, while outrageous and amusing at times, feels like one big filler episode. Scenes go from one situation to the next with no real substance or plot foundation. Occasionally, the humour in these scenes is lost and you’re left waiting for something, anything to happen or make you laugh. All throughout you see the unremarkable Kazane Hiyori admiring Sakurai from afar (despite the obscene situations he gets himself in). Hiyori is the typical nice and modest girl who is too shy to confess and who the main protagonist is nice to, but is otherwise too thick to notice her feelings. 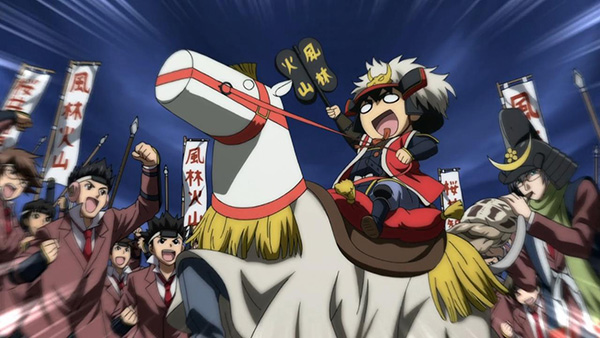 The second half of the movie, casually spoiled by the blurb on the back of the box, sees Hiyori revealed as having a “deeper, more dangerous link to the Angeloids” as she “tries to kill Sakurai”. Just after Hiyori confesses her raging love for Sakurai her life is cut short by the front bumper of a speeding truck. It turns out her real self was sleeping as an Angeloid of the Synapse who now awakens and commences spatial annihilation.

While this twist is interesting and turns the movie to a darker affair, the resolution stays resolutely cliche. Heaven’s Lost Property does best when it sticks to outrageous fan service but stumbles around with a weak plot once it starts to take itself seriously. The story is a unique spin on what fans have seen of the series so far, but few will see it as a highlight of the experience, and will likely enjoy it for the laughs and to see their favourite characters again. 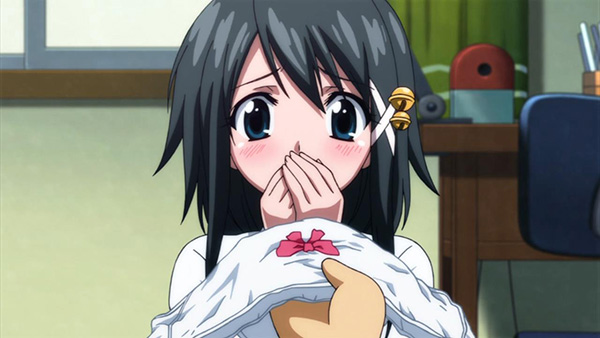 Visuals
The main appeal of anime movies, particularly those that include recaps, is higher quality animation. Instead of stretching the studios budget with X amount of episodes, 96 minutes is real potential to  shower the fans with eye-watering quality. That was the case with other recent movies such as Unlimited Blade Works, where the studio painstakingly tried to improve the look and feel of the TV anime series they were responsible for earlier. Sadly that’s not the case here as the visuals are almost identical to the TV anime. That’s not to say it’s bad, because it’s fine, but you wouldn’t be able to tell you were watching an anime movie rather than a standard episode from the visuals alone. 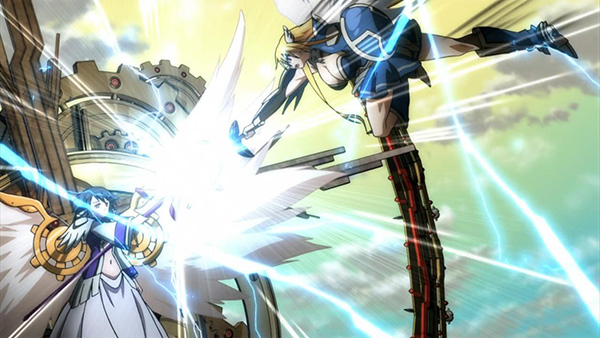 The Angeloid of Clockwork stays true to Heaven’s Lost Property’s style of animating funny situations with chibi character art. This is done so often sometimes it can be strange seeing the main character drawn normally. The visuals are standard hallmarks of a lighthearted anime that is built on fan service with the occasional action thrown in.

The sound in The Angeloid of Clockwork, while not note-worthy, is solid with no gripes throughout the feature. The voice acting of both dubs stay true to the original anime series. The Japanese voice track gets an extra point due to a hilarious song at the start of the movie that is best heard in its original language. The sound track was suitable but hardly remarkable and none of the tracks are something you’d be humming to yourself or chasing down in the foreseeable future. 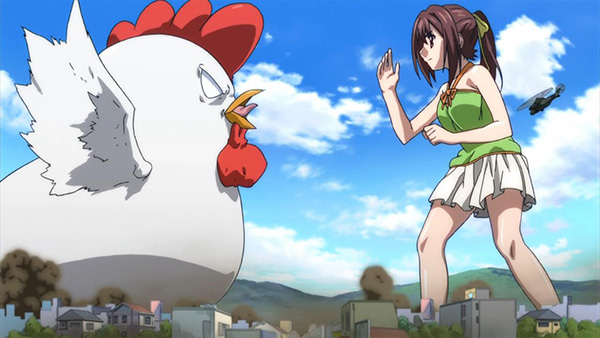 Extras
There are a few welcome extras included with this release, most notably the U.S. commentary of the English voice cast which provides some amusing insight. The rest of the extras are a mix of trailers and teasers, both English and Japanese. Standard releases of anime movies are often very bare-bones, moreso than this reviewer wants them to be, and this is almost the case here. But as mentioned, the above additions are a nice bonus.

Overall
Think of Heaven’s Lost Property the Movie: The Angeloid of Clockwork as something that simply complements the two seasons Madman has already released. It isn’t by any means “standalone” whatsoever, nor is it a continuation of the series. You have to wonder then what the studio wanted to achieve with the Angeloid of Clockwork. It does provide an alternate viewpoint through another love interest, essentially unlocking a new “arc”. While the romance reaches a point that’s actually fairly cute, it doesn’t develop far enough for you to feel attached to the sudden plot change in the second half. 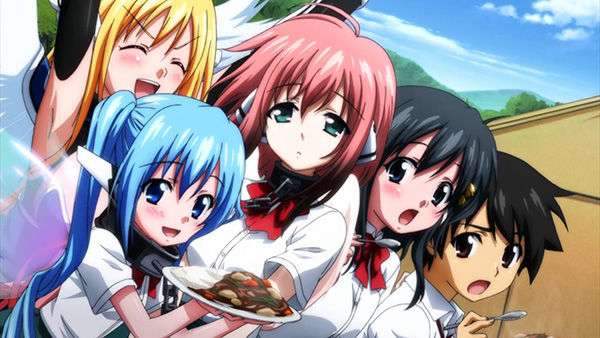 Do you love Heaven’s Lost Property and simply get a kick out of watching the characters fool around, seeing up-skirts with a bit of action at the end? By all means check this out as this was clearly made for the fans in-mind. Unfortunately that also means it was made with no thought for the outside viewer either, meaning it’s a confused and underdeveloped mess for everyone else.

See here for another take by Travis Bruno on Funimation’s release.