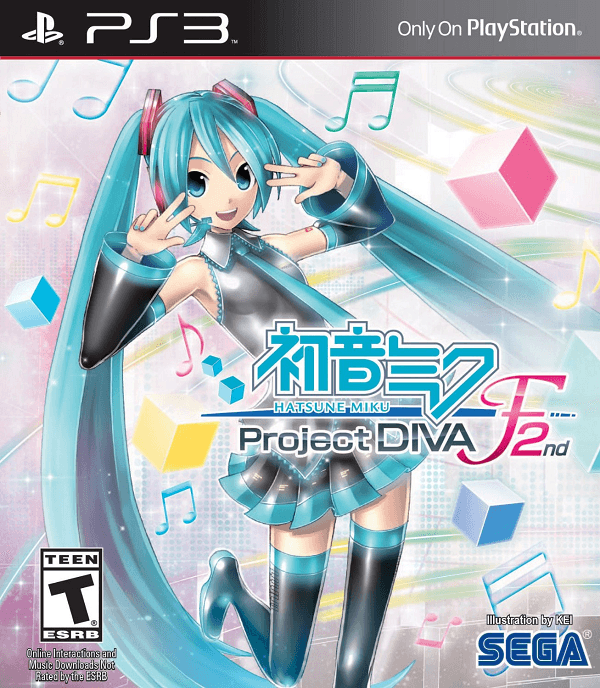 Overview
Despite being a virtual pop idol that was once something exclusive to Japan, Hatsune Miku has garnered quite a large following around the world. Even then, Sega surprised everyone by releasing Hatsune Miku: Project DIVA F last year in the West, making it the very first time a Miku title was ever released in the West. Now a year later and after appearing not only in tours around the country but even on a late night talk show, Hatsune Miku and the rest are back once again with Sega’s Hatsune Miku: Project DIVA F 2nd and it feels like she never really left.

Gameplay
Many of the elements in Hatsune Miku: Project DIVA F 2nd are almost the exact same as they were from the first title but there is a good reason for that as it mostly revolves around the title being a rhythm game that already had such a tight and well-designed input system it is hard to top. As such Project DIVA F 2nd makes a few slight tweaks to some inputs but otherwise many elements will feel quite similar to those familiar with the last title. 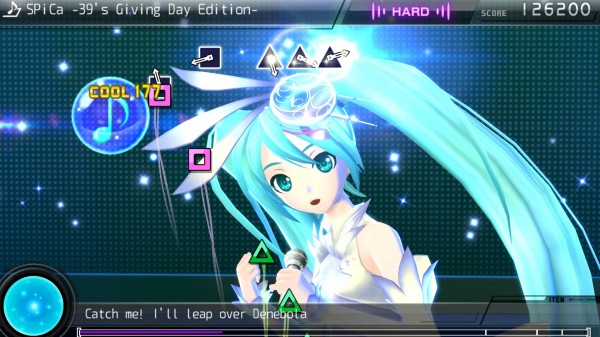 Those jumping on the Miku bandwagon with this game will find an absolutely loaded rhythm title that can be both incredibly fun and frustrating at the same time. There are forty different songs available to play in Project DIVA F 2nd, most of which will need to be unlocked by completing previous songs, and every one of these songs offers a different experience as button inputs fly across the screen in random patterns as players try to hit them at the right moment all while not losing focus and watching the music videos in the background.

The Easy difficulty is a very good recommendation for newcomers and even those who may not want much of a challenge as even Normal can be difficult thanks to Project DIVA F 2nd requiring an 80% accuracy rate to even succeed at completing a song and the title making use of all of the face pad and directional buttons of the controller mixed in with Star Notes that need to be completed with flicks of the analog stick. These Star Notes have also been modified slightly to require players to flick the stick in a certain direction or use both sticks at the same time to properly complete and not lose their combo. 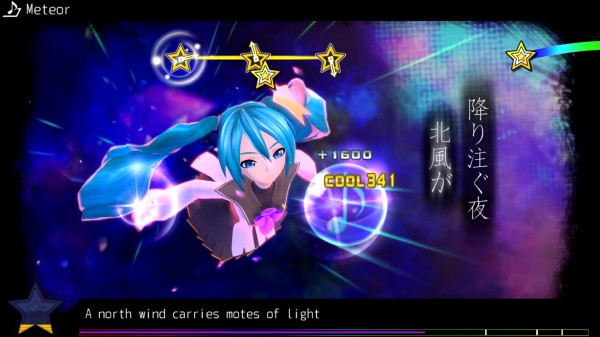 Of course for those really wanting a challenge, you can add various elements to increase your “Diva Point” payout which can be used to purchase costumes and accessories, by making the appearance of notes even more random or lower the difficulty by increasing the window of error players will have to work with. Then again, the true challenge lies with Extreme mode where even the most skilled will find their hand-eye coordination being put to the test.

Managing to complete a song will unlock plenty of content for players ranging from costumes, new songs, accessories, and even themes you can use to change up the way the top and bottom of the screen will look. Everything except for the songs will need to be purchased via Diva Points though so be careful, that new costume may take quite a number of points to unlock. Then again, considering most of the songs will need to be played through more than once so you can practice your movements and train your memory, this isn’t much of an issue. 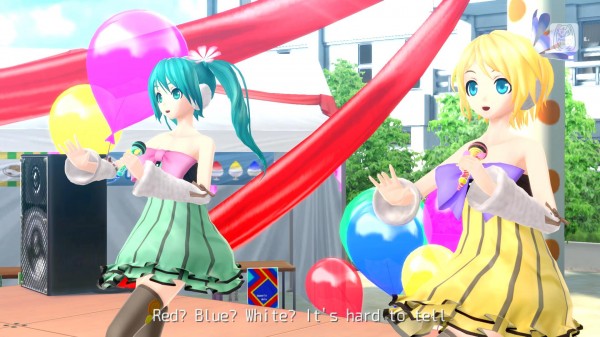 While the rhythm gameplay is obviously the highlight here, there are a few other modes in Project DIVA F 2nd, such as the return of the Edit mode that allows players to create their very own music videos and designs. The Edit Mode is even more robust than before, though actually creating something amazing in this mode will take a lot of dedication from players. There is also the return of the “Live Performance” option that gives players control of the camera and set-up for certain songs and the Diva Room.

This Diva Room once again allows players to buy various things to customize each of the Vocaloids’ rooms and change their outfits as well as interact with them, though this is mostly done through rubbing their head the right way and playing simple mini-games to raise their happiness with the player. 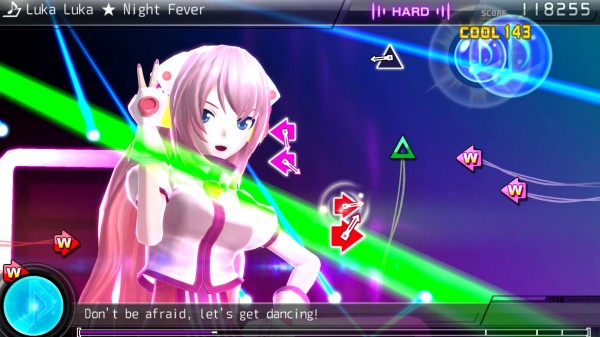 It is worth noting that one thing that fans have asked for is included in Hatsune Miku: Project DIVA F 2nd and that is English subtitles. Unlike the first game, Sega has actually put in the extra effort of giving us English translations of the songs in the game which is a very big improvement. While this does make it something of an extra distraction during rhythm gameplay (it can be switched back to romanji in the menu), simply watching a video of the performance after completing the song is the best way to tell what actually is going on and what is being sung.

Visuals
Despite being a sequel, Hatsune Miku: Project DIVA F 2nd really hasn’t been given that much of a graphical upgrade over its predecessor, though that really isn’t much of an issue The basic designs of Miku, Luka, Rin, Len, Kaito, and Meiko are all the same as before, but that is pretty much where the similarities end. Every character has numerous outfits, called modules in the game, that can be unlocked and these outfits can change the entire appearance of the character wearing them. 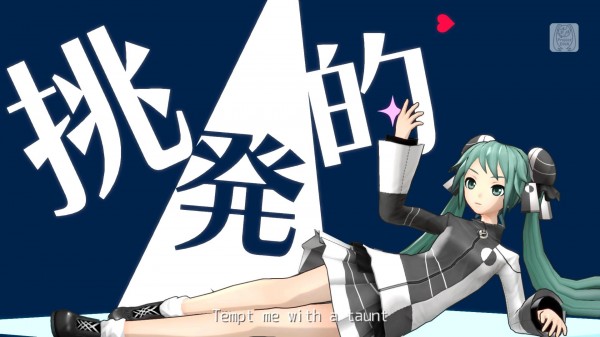 Combine this with how well choreographed all of the sequences in the music videos are and you have a gorgeous looking game that will be hard to put down. There is even a nice amount of variety added to the loading screens as new fan art for each of the characters has been added into the game, making almost every loading screen look different than the last.

Audio
As with any rhythm game, the real focus is on the music. It just so happens that this is where Hatsune Miku: Project DIVA F 2nd shines as it not only features a number of brand new tracks but also countless fan favorites that were released in past games. This means that popular songs such as Miku’s “World is Mine” have finally been released in the West among many others that have never graced our shores. 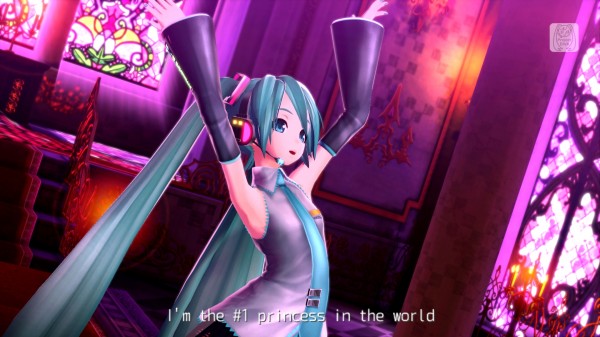 There is such a variety to be found here that there is almost something for everyone as long as you are a fan of J-pop . Every Vocaloid is given a chance to shine in solo performances and there are a number of duets spread throughout the release. As before, those who are fans of Meiko or Kaito will find the number of songs on offer a bit lacking for these two as most of the music comes from Miku herself or from Megurine Luka. The Kagamine twins are generally paired off in duets but they do have a few solos of their own.

Overall
It is easy to lose hours of time playing through the amazing sounding songs and enjoying the vibrantly colored and well-designed music videos found in Hatsune Miku: Project DIVA F 2nd. With so much content to unlock and the title offering an extremely difficult challenge to overcome, fans of Hatsune Miku or even Vocaloids in general will find this an amazing offering with a number of nice improvements, even if some elements feel like simple transitions from the first title.