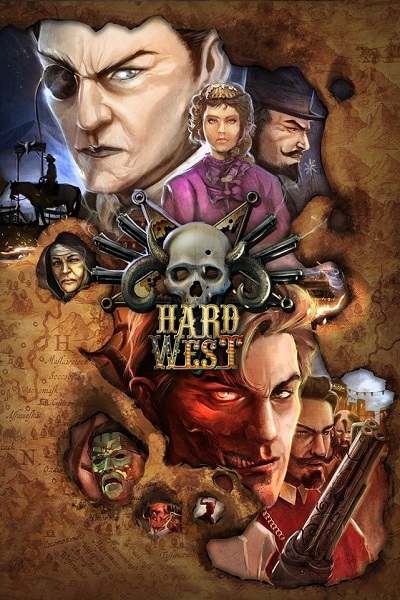 Hard West is a crowdfunded title with an interesting ‘weird west’ premise that amalgamates Gothic horror with Cowboys. After having a release date which was pushed back to avoid conflict with bigger titles like a certain post-apocalyptic RPG; the game is finally released. So, how did I go playing as a man with no name/half a face? Read on and find out. 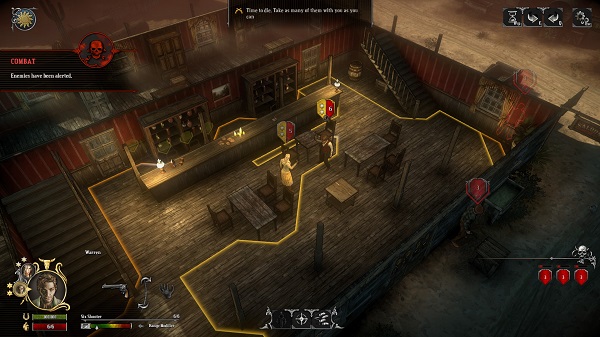 The campaign goes through a number of different stories featuring a diverse cast of characters and complications. On the one hand you have what can be described as the ‘main’ story focusing on the trials and travails of the Truss family as they deal with the machinations of the devil himself. Another scenario has you search for a lost Mayan city of gold while another has you attempt to bring scientific advancement to the chaos of the Weird West. What remains constant throughout all these scenarios is the Weird West setting itself. 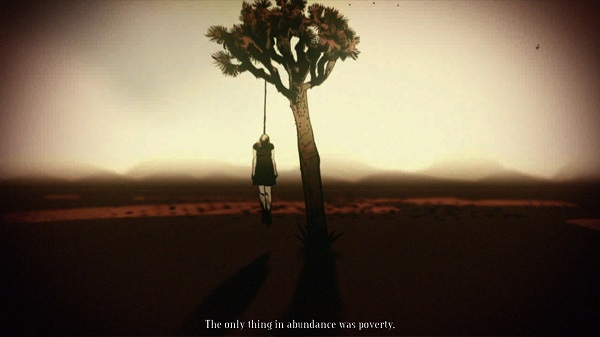 The fictional universe that is created in Hard West is quite an interesting amalgamation of gothic fantasy and Western tropes. In the same world that you have greedy railroad companies stiffing frontier families, you’ve got devils setting up their own sinister cults. Your protagonists also range from half-dead cowboys, to cursed undertakers, and possessed treasure hunters. If you’ve seen it in a spaghetti western, then it’s probably in this game and has some supernatural twist to it. It’s certainly different to many other fictional universes I have seen. I do feel however, that the game doesn’t really explore these supernatural elements as deeply as it could have.

The story is largely told through voice-over narration with an actor whose voice is so gravely that it sounds like he had been chewing cement before the take. The performance isn’t very nuanced (although that isn’t a bad thing) and neither are the stories told throughout the scenarios (that IS kind of a bad thing). At the start of each scenario we get (largely) static drawings featuring the voice over explaining the action and introducing characters alongside their motivations. None of the characters feel particularly developed as they move from one melodramatic, over-the-top beat to the next. Their motivations and actions are generally quite simple and one-dimensional. The story itself within the game is actually fairly weak but does a solid job of framing the action. 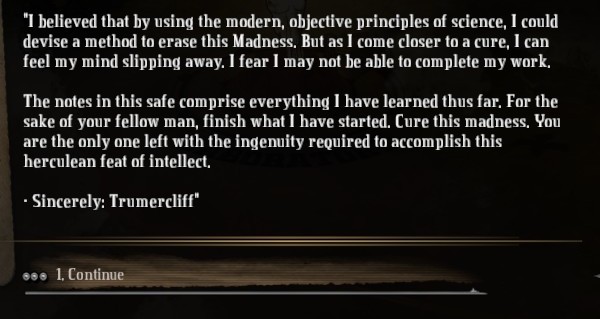 The game breaks down into two sections; the meta-game which involves choosing where your posse will travel to next, and the turn-based tactical map. The latter would probably be more recognisable to those amongst you who have played an isometric turn-based strategy games like the XCOM series. You control your individual posse members and have a limited amount of action points with each of them to use in moving, shooting, reloading, and activating special abilities. Movement and cover are especially important as getting shot without some manner of cover to hide behind means you’ll take the maximum amount of damage (which can be quite heinous) from a weapon if you are hit. The combat is generally quite fast, exciting, and generally hits my turn-based buttons.

During some maps, the enemies aren’t alerted to your presence and don’t start off actively hostile. This adds another layer of strategic planning to the game, wherein you can move units around to complete objectives and prepare ambushes for enemies. My one gripe with this mode is that my posse occasionally decides to walk across the map instead of running and it frustrates me to have to wait as they move from point A to point B slowly. It would have been a useful feature to allow me to speed up the walking animation here. 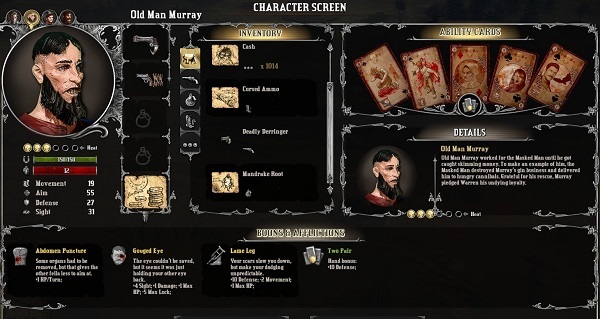 The meta-game, by comparison, feels quite lacklustre. The map is basically a static image with a number of nodes you can visit. Most of these are either ‘choose-your-own-adventure’ style encounters which allow you a limited degree of roleplaying by giving you a limited selection of choices, or combat scenarios which you play out in the aforementioned tactical mode. Alongside these are nodes for shops of various descriptions and functions. This presents the veneer of choice within the game, with the player being presented with various side quests that unlock better gear, more resources, or stat bonuses. Overall, it appears to be quite shallow with less polish applied to it than other areas of Hard West.

That being said, Hard West does make up for lack of depth by giving player’s breadth in the variety of scenarios. Each scenario has its own separate and generally unique mechanic which players have to deal with in turn. Sometimes, players will need to manage food for their posse as they move about the map, and at others their managing an entire expedition as they search for Mayan gold. There’s certainly enough variation that you’ll be able to look past the fact that these variations are relatively shallow compared to other games involving resource management and strategy. Luckily, each scenario is short enough that you shouldn’t be too put out. 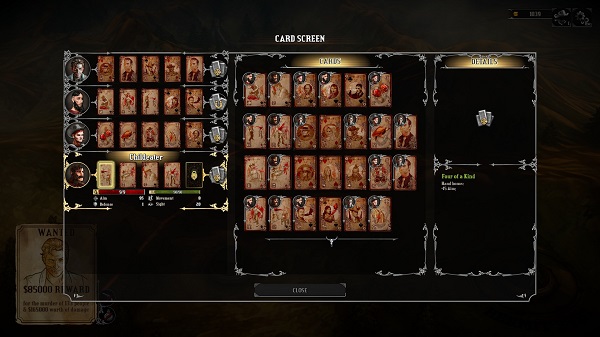 One aspect which I found to be particularly interesting in the game was its use of a card-based system to allocate abilities and bonuses to members of your posse. Basically, this adds another element of inventory management to the meta-game. This works out to be quite sophisticated however, as when you combine these cards on one individual into poker hands (pairs, full house, etc); the individual in question gets a bonus to various stats. It effectively means that all the members of your posse are flexible enough to fit any role but also largely interchangeable when it comes to combat. They do get differentiated somewhat by the injuries they sustain which can provide bonuses and penalties, but you’ll largely recognise them more by their equipment more than anything else.

The visuals aren’t anything in particular to write home about as the tactical and strategic maps are both static and unimpressive. Most of the maps recreate your traditional Wild West locales (as seen in Western movies) like towns and ruined missions, mixed in with things like Aztec temples. These maps sometimes entire into ‘nightmare mode’ wherein everything gets darker and the scenery takes a macabre turns with gore and viscera turning the map into a hellscape. It’s an interesting idea, which I didn’t see really being explored too much in my playthrough. The (largely) static drawings presented at the start of each scenario are similarly solid but forgettable. 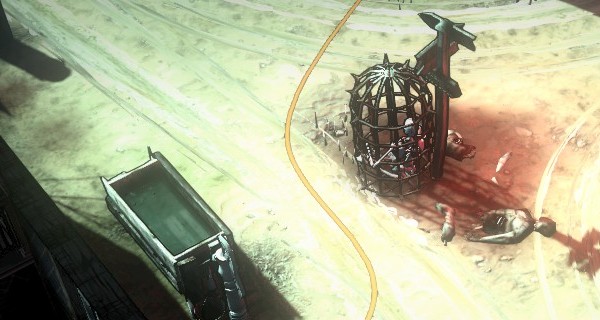 I actually quite enjoyed the soundtrack and audio design of the game. The music largely sounds reminiscent of classic Spaghetti Westerns with plenty of horns and Spanish guitar. It’s somewhat limited however, with a lot of the tracks sounding similarly dreary and dirge like. I feel that it would have been to the game’s credit to have a wider array of tracks with various emotions behind it. The audio design is also pretty good and I always found it enjoyable to hear guns being loaded, fired, or bullets ricocheting into their targets. 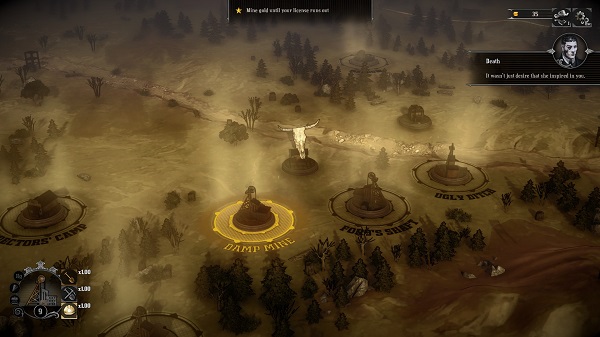 So there is a lot which Hard West does well and a lot which it missed (as you may have noted from the length of this review). The setting is interesting, but the story it features is lacking. The tactical gameplay is awesome while the strategic level feels underdone in a lot of areas. It’s varied enough to keep things interesting across multiple scenarios. The visuals aren’t impressive but the sound design is pretty swell. The only thing I can conclude with is that for all its flaws, which I only nitpick because I f#$%ing love Westerns AND Lovecraft, I actually had quite a bit of fun with this title. I feel that it’s worth a fistful of dollars (or 20 USD to be exact) it has now just for the good tactical and varied but somewhat shallow strategic gameplay. A caveated recommendation is one I’d give to fans of the new XCOM series or Westerns but it’s understandable if you wish to hold off until a sale.