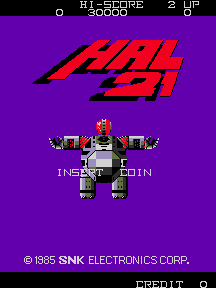 HAL 21 is yet another classic from SNK Playmore that has been released onto the Playstation 3 and Playstation Portable through the Mini section of the Playstation Store.  If you buy one copy of the game, you can play it on either the PS3 or PSP, although saves will not transfer over.  Although I did not personally play this game when it was originally released (I was just a tadpole in a swimming pool, so its not my fault) I had a pretty fun time with this re-release that is currently available.

The current offering of HAL 21 on the Playstation Store has no updated HD graphics, no changes in gameplay and no crucial differentiations that would allow a retro gamer to distinguish this game from the one he used to play in the arcade.  At its very core, this game is a top down shooter that has been duplicated by many in the years after its release in 1985.   In the game, you fly a combat fighter that has been equipped with bombs for ground targets and missiles for the hundreds of enemy aircraft that will attack you.  If you manage to get to the end of the level, there is huge boss ready to take you down if your not prepared.  If the action gets to be bit much, then you can always bring in a buddy to help clean up the mess. 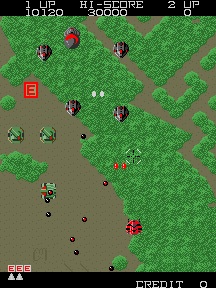 However, even with two people playing, this game can get rough.  Designed as a quarter crunching game back in the 80s, not much has changed as far as difficulty goes.  The enemies all have incredible aim, and when there are literally 20 of them on the screen on at once, it is tough to navigate through them and do some shooting too, especially when you also have to account for ground targets.  In addition, some slightly inaccurate controls and 1985 graphics that are not very detailed can leave one feeling quite frustrated.  Luckily, the options menu allows you to save your progress and the game has unlimited continues (so long as you insert another “coin” after the game over screen). 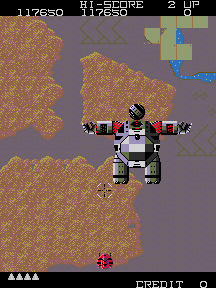 In conclusion, those wanting to hone or train their reflexes will get a plethora of practice by playing this game.  It is definitely rough going at first, but in the end, you’ll have fun and you will have learned some valuable skills like: patience, self control (I didn’t throw my controller!), pattern recognition, and, as mentioned, better reflexes. 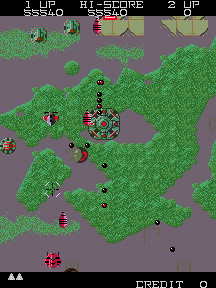 Those looking for a fun gameplay experience for a few hours should also take a look at this game.  It provides a nice history lesson and they can see where their current generation of games has come from. On top of that, the unlimited continues option will allow them (after quite a few deaths anyway) to actually beat the game.  All in all, there are a ton of worse games for $2.99 and if you can control your anger a few times, this game can be quite fun, although the game will leave you with one question: What in the heck IS a HAL 21?!