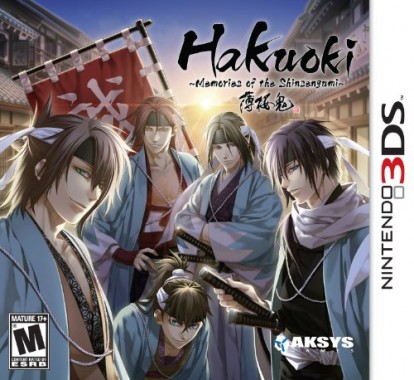 Overview
Idea Factory’s Hakuoki franchise has been around in some format since late 2008. What started as a single otome game (a visual novel focused on female players) has blossomed to a media powerhouse with manga, anime, and nearly a dozen video game entries. With the release of Hakuoki: Memories of the Shinsengumi on the Nintendo 3DS, Aksys and Idea Factory are looking to bring the franchise onto a new platform for western audiences. How does the newest release hold up? Should it be granted the title of shogun or redeem itself with seppuku? Let’s find out. 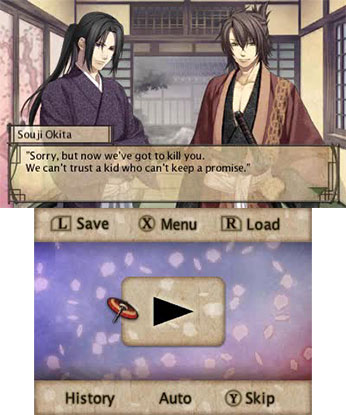 Story
Your name is Chizuru Yukimura. Your father, Dr. Kodo Yukimura, has left your hometown of Edo and is stationed in Kyoto for his medicinal practice. When he ceases to answer the letters of his daughter, which he’s been faithful to write daily, you decide to leave home and search for him. When you get to Kyoto, though, you’re unable to find him, and the man he said would help you, Dr. Matsumoto, is out of town on business.

Disguised in the garb of a man and wielding the short sword you’d been taught to use as a child, you take off late in the evening. You know Kyoto is a dangerous place, but your confidence gets the best of you. When you’re jumped by a few ronin thugs intent on getting your sword, you take off running and duck into an alleyway, hiding under some lumber.

A short while passes and, just as you begin to climb out from the lumber, you hear your assailants. Something feels out of place, though. They’re no longer after you. The ring of steel sings into the night as they try, desperately, to fight off a group of samurai. When the ronin who were after you are unable to appease or defeat the samurai, things turn from bad to worse. The samurai not only kill the ronin, but proceed to chop them up. Fiercely, they hack and slash away at the corpses, saying only that they want more blood. 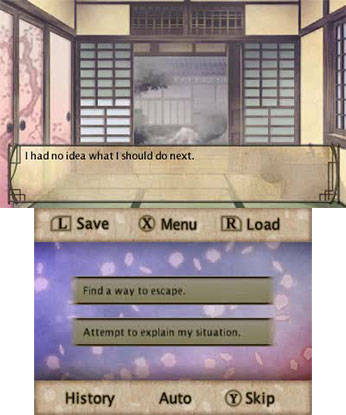 As you watch, you accidentally make some noise, attracting the attention of the blood-crazed samurai. They turn and begin to come after you, their white hair and glowing eyes marking them distinctively in the night. They come ever nearer, and just when you think you have no escape, another group of samurai, clad in blue, appear and quickly dispatch the crazed attackers.

The blue clad warriors begin to talk amongst themselves. You can hear what they’re discussing. The person they mistook for a young boy had seen too much. Surely it would be bad for the Shinsengumi if word of what had transpired were to become common knowledge. After heated discussion back and forth, they decide to spare you for the time and take you back to their headquarters. 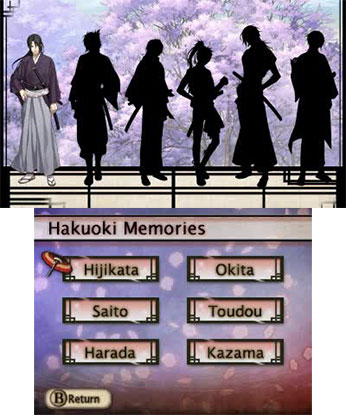 When you wake, you’re bound and in bed. Soon, an older man comes in and escorts you to the common room, where every commander of the Shinsengumi, a ronin police force, were waiting to decide your fate. Upon revealing that you were actually a lady and that you were looking for your father, Doctor Kodo Yukimura, the commanders reveal that they, too, are looking for your father, and that you would prove to be a valuable asset in time. Thus began Chizuru’s adventure with the Shinsengumi. What were they so eager to keep you from finding out, though? And why are they also searching for your father? Only time will tell.

Gameplay
To call Hakuoki: Memories of the Shinsengumi a “game” feels a bit like a misnomer. In truth, it feels more like a choose-your-own-adventure book.

Classified as an otome, or “maiden” game, Hakuoki aims to deliver the overarching narrative while setting the player up to develop romantic relationships within the game. In this case, most of the Shinsengumi commanders can become love interests for Chizuru. 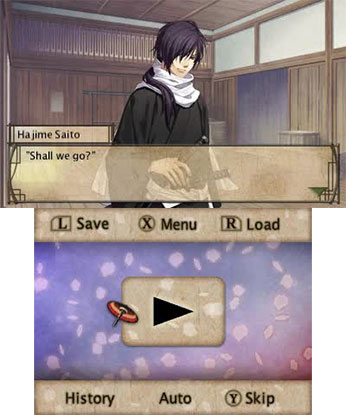 What Memories of the Shinsengumi lacks in gameplay mechanics, it makes up for in spades with the story. The world of 1860’s Kyoto comes to life with a wonderfully delivered narrative. Not only is the story well put together, but the time is taken to properly flesh out each character, leaving no one to feel too flat or one-dimensional. They also do a fantastic job of giving you easy access to an encyclopedia so you can find out information to better flesh out their world quickly and easily.

For the most part, you’re simply going to be hitting the “A” button (or tapping the screen with your stylus)…a lot. A handful of times each chapter, you’ll be given some choice that will impact how the rest of the chapter (or potentially your time with your love interests) plays out. As these relationships grow, your decisions can greatly the outcome of the story, providing some interesting reasons to play through the game again with different choices.

For fans looking for a little more out of the game than just the story, a few minor features have been added to the 3DS version of the game. You can use the in-game photo booth to decorate photos with the commanders of the Shinsengumi. You can also go back and tackle story pieces you’ve completed to quickly see your decisions play out differently. Beyond that, there isn’t a lot to do outside of the story. 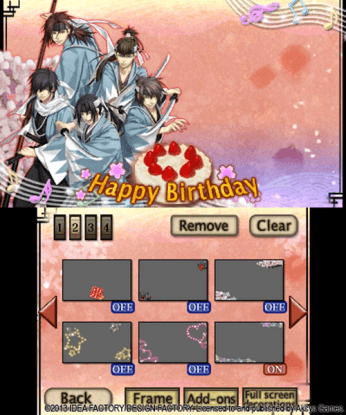 Visuals
The visuals in Memories of the Shinsengumi are straightforward and simple, but very well done. There are no moving parts to the game, so everything is set up with beautifully drawn anime images with a textual overlay. It serves much like some roleplaying games have done in the past, but without any character models. You can always go back and look at character or story-specific images in the gallery, too.

The game’s audio design is well done. The music does a great job setting the mood, but sound effects provide nothing more than a storytelling tool, giving the occasional sword clash effect or the like. The voice over work is where the real meat of the audio comes into play, though. Nearly every line of dialogue in the game has Japanese voice work to go with it. It does a wonderful job conveying the emotion of the lines. It would have been nice, though, to have had English voice work as an option.

Overall
Overall, Hakuoki: Memories of the Shinsengumi will appeal to a very limited audience. The title looks good and does a wonderful job setting up the world. Ultimately, though, the story and romance are the only things propping up this experience. Fans of visual novels or otome will find an excellent offering here, but with virtually no gameplay mechanics or interaction, it’s unlikely anyone else will be gunning for this title.