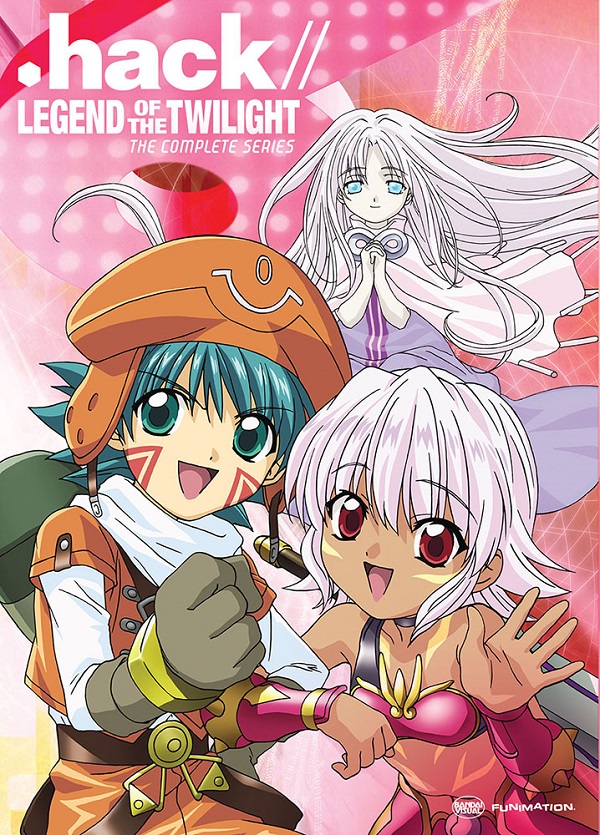 Overview
Back in the early 2000s the .hack series was blossoming into an extremely successful franchise that saw a trilogy of games being released as well as a handful of manga adaptations and even a few anime adaptations. While the more serious .hack//Sign was the first series to be introduced to fans in the West, it’s long runtime and darker themes made the title a bit difficult for younger audiences.

Story
A number of years have passed since Kite and the rest of the .hack members managed to put a stop to the events that transpired in the video games and since then The World has undergone very few changes and remains an incredibly popular virtual MMO. After being split up by a divorce, the brother sister pair of Shugo and Rena have had a difficult time of spending time with one another but Rena has found that the best way to do so is through The World. 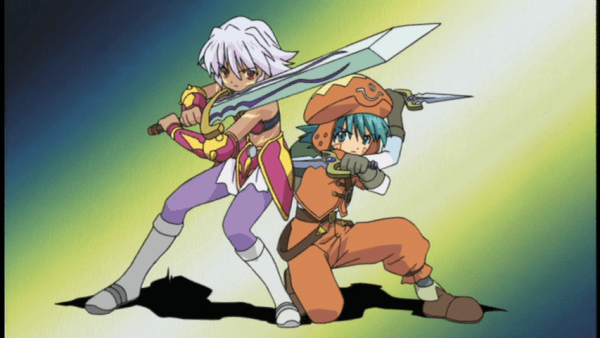 As such she entered a character contest without her brother’s knowledge and after winning, Shugo is awarded an avatar that looks like a chibified Kite while Rena receives a smaller version of BlackRose, both characters who became legends due to their actions in the past. Despite not knowing much about The World or MMOs in general, Shugo takes this as a good way to spend time with part of his family that he was separated from however their time together quickly is soured due to the appearance of a strange unbeatable monster.

After Shugo is defeated by the creature, he is revived by the mysterious AI Aura and given the Twilight Bracelet and the skill Data Drain. By using his new ability the strange enemy is easily defeated while his sister is saved by the legendary Balmung of the Azure Sky. Unbeknownst to the pair of young players, the issue regarding strange monsters has started to become a rampant issue in The World. 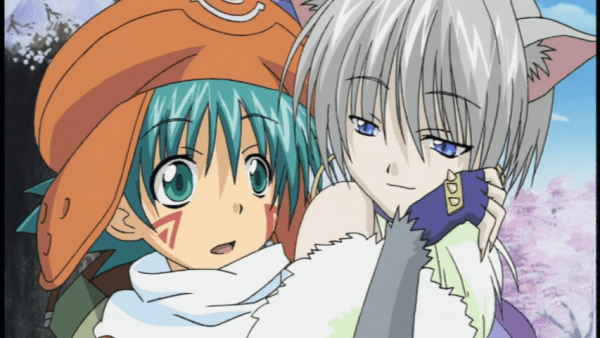 Throughout the course of the first half of the series Shugo and Rena find themselves encountering a number of these strange glitched opponents while also making friends with the rare item hunting wavemaster Mireille, a knuckle master who has earned the rank of werewolf known as Ohka, and quiet and reserved Hotaru who cares for a small grunty. The group is also joined by Sanjuro who mistakenly believes that Shugo is Kite but serves as his teacher as things around the new pair grow increasingly dangerous, ultimately placing Rena in grave danger as the dangerous history of The World begins to repeat itself.

In many ways .hack//Legend of the Twilight is a far simpler series than the original and as mentioned earlier seems to be designed for a much younger audience than the core series. Strangely enough despite the childish nature, more characters from the video game series appear in this series than in .hack//Sign meaning that at the time only those who spent time with the games would appreciate the likes of Sanjuro and Balmung being in the group or those who saw the original series remembering the appearance of a certain knight. 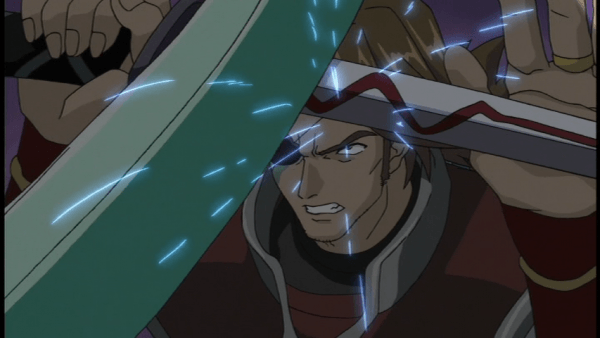 The humor is rather standard for a series such as this since the majority of it either comes from Shugo acting like a dork during the first half or failing miserably despite trying to be serious and having the rest of the cast laugh at how bad he’s messing up. There are various other running gags that appear throughout the series, such as Shugo’s attraction to the teasing Ohka never paying off how he wants and how some of the cast wonders if Shugo and Rena are really siblings thanks to how they act.

Due to its shorter length, the first half of .hack//Legend of the Twilight simply serves as a way to introduce fans to a number of the characters that begin to play alongside Shugo and Rena while the latter half begins to pay off on the small developments that occurred throughout the first half by revealing the true nature of the glitches and the strange masterminds behind them. 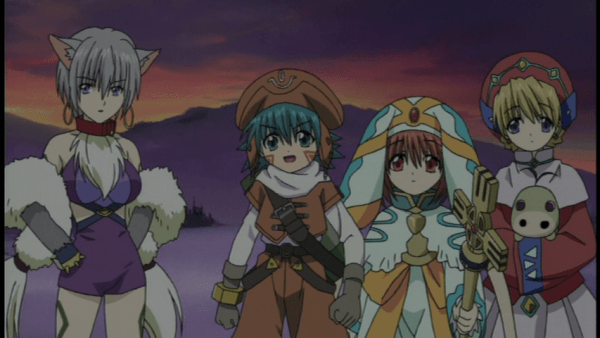 Despite trying to appear complex, the story here is as simplistic as it comes and along those same lines you cannot expect much character development to take place here as nearly every character continues to stick true to how they initially act outside of Shugo who begins to take the game serious in order to rescue his sister. The reveal near the end of the series does try to add some depth and explain the reason that everything started to occur but ultimately feels generic in the end; especially for those who have spent time with the franchise’s other titles. As such viewers cannot expect to find much of a lasting impression once the storyline in .hack//Legend of the Twilight wraps up, especially since the majority of these characters have never appeared in other material from the franchise.

Visuals
The artwork found in .hack//Legend of the Twilight is a bit of a downgrade as far as the character designs go. While Sanjuro and Balmung manage to retain the same level of detail fans have grown familiar with, most of the other characters are presented in odd ways. The majority of the younger cast, including Shugo, Rena, Mireille, and Hotaru are presented in chibi format except for when Rena is used as an awkward feeling fan-service element instead of the more logically designed Ohka. 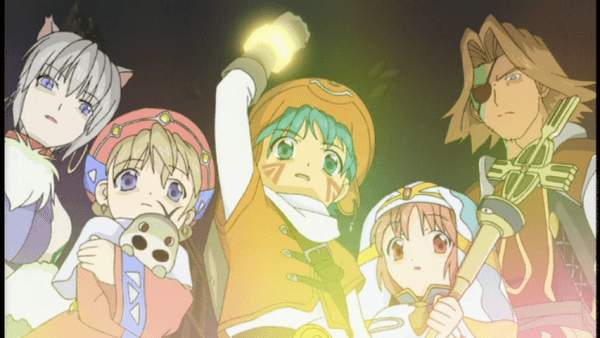 Enemy designs will be familiar to those who have played the games while the actual combat animations are fairly standard since most fights are quick affairs with monsters that are generally defeated with only one attack or with attacks that are only shown via canned animation sequences. Background art remains vaguely similar to what was presented in The World however don’t expect the same level of detail as what has previously been exhibited in the franchise.

Audio
Considering this is a license rescue of a show that previously aired on television here in North America back in the early 2000s FUNimation has not recorded a fresh English dub for .hack//Legend of the Twilight and have instead released the series containing the original English dub alongside the original Japanese voice track. The English voice acting is rough sounding at times, especially since Rena can sound rather shrill and annoying, while the rest of the cast remains fairly consistent. 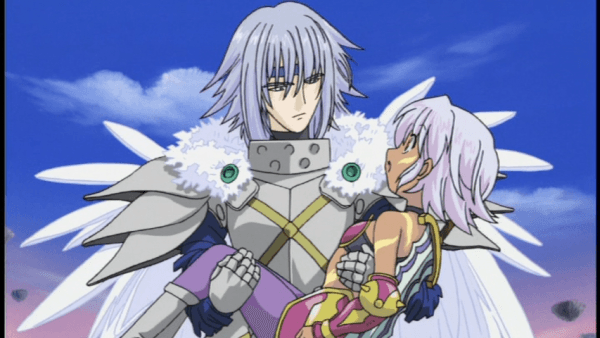 The soundtrack for the series is decent enough though it is a downgrade compared to the other series in the franchise as it features fairly simplistic tunes with only a few songs featuring any kind of lyrics. As for the opening and ending themes, they remain the same with the opening “New World” by Round Table being a satisfying and fitting theme for an anime taking place in an MMO while “Emerald Green” by See-Saw serves as an emotional sounding closing theme that rarely fits the ending tone of most episodes.

Extras
FUNimation’s release of .hack//Legend of the Twilight is a rather bare bones release as far as bonus features are concerned as the only on-disc extras are clean versions of the opening and ending themes, a couple minute long character art clip, and trailers for other FUNimation properties.

Overall
.hack//Legend of the Twilight feels like the type of series that was created to draw children into the franchise by being as accessible as possible. Except the only problem is, with a number of elements only longtime fans would appreciate and a number of jokes relying on fan-service elements it feels like this series doesn’t really know how to present itself. The story is satisfactory and can be rather fun at times but, especially for those who want something a bit lighter to go with their .hack collection, but don’t expect anything too impressive with this series.