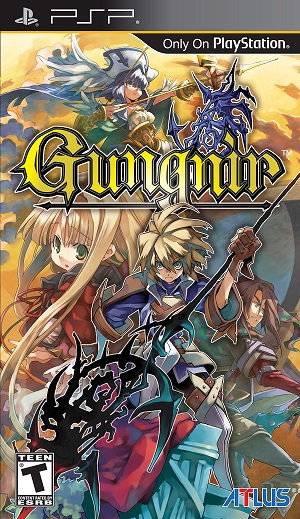 Overview:
Over the past seven years Atlus USA has been bringing SRPG fans a very interesting series that has been developed in Japan by Sting. This series just happens to be called Dept. Heaven and over the course of its run we have seen four titles of the series appear on our shores, the most recent being Knights in the Nightmare which was seen as a rather large success and well received by fans of the genre. Can Gungnir, continue the same tradition of quality SPRG gameplay fans know and love?

Story:
Gungnir’s story follows the journey of Giulio, the son of the former leader of a rebel faction named Esperanza. The reason for Esperanza’s rebellion is due to the fact that nearly the entire faction is formed up of Leonicans, a race which is discriminated against and often slaughtered by the Daltans due to their supposed inferiority. 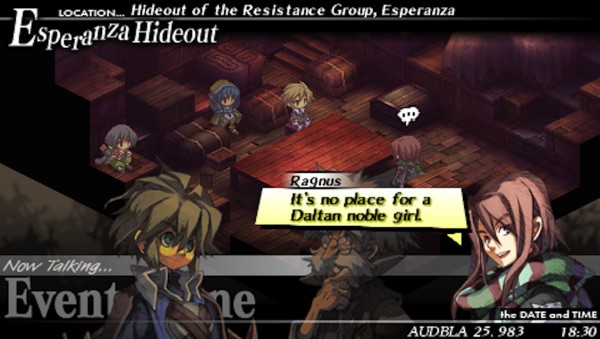 After the loss of their leader in a massacre, the group has fallen on hard times and is mostly trying to fight simply for food until Giulio and his band of well, bandits, attack a caravan which just happened to be a slave caravan. Inside of this caravan is a mysterious woman named Alissa who the empire’s Galgan army wants to re-capture desperately. With the Esperanza rebels now in possession of Alssa, the army moves in and begins to subsequently wipe out nearly everyone Giulio knows. Before Giulio himself is about to be cut down, a mysterious girl appears naming Giulio the chosen one.

She then provides Giulio a powerful and mysterious spear which just happens to be the demonic weapon Gungnir. With his new found weapon and power, he is able to drive back the army and begins to organize a counterattack that will be capable of destroying the Empire once and for all. As it stands Gungnir provides a tale of war and politics that seems a bit generic for the most part, but the game does offer a number of decisions that can be made which will slightly alter their path as well as possibly provide a different ending. 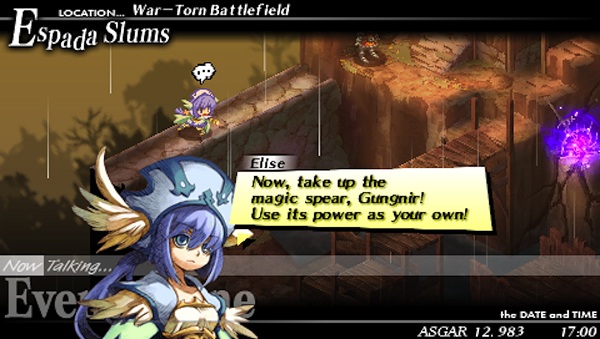 This adds a small level of choice which will entice players to keep an eye on the storyline, though unfortunately the main cast of characters is also quite bland. Nearly all of the characters are given very basic character development and that is all, with practically zero emotions ever truly evident. This can make the player feel extremely disconnected from the whole plot of the story as they will feel like they are simply commanding an army with a few noteworthy fighters rather than a group of rebels trying to who’s plight will keep you interested as they try to stay alive and overthrow an oppressive empire.

Visuals & Audio:
Gungnir takes advantage of the tried and true method of using sprites for characters in the battle system and this is quite beneficial as the characters look quite impressive on the PSP’s screen as they fight on the varied enough battlefields. Also most of the game’s main cast will have portraits which are well drawn, though there is a small issue with these portraits and that is the fact that they always look the same. 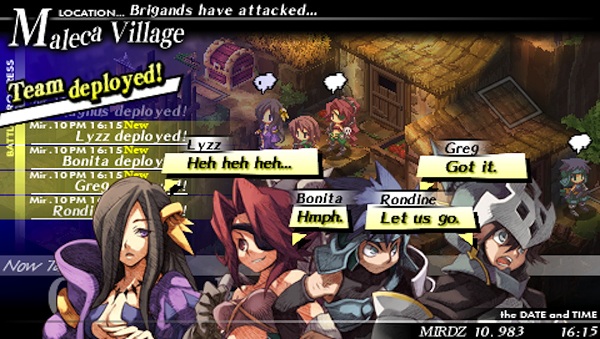 It is almost expected nowadays that character portraits at least change to match the character’s emotions at any given time. Because of the unchanging nature of these images some Event Scenes are very difficult to feel overly interested in as they play out with barely any emotion whatsoever, which isn’t helped by the fact Gungnir is not voiced. Despite the lack of any vocal dialogue, the title does have an interesting soundtrack which consists mostly of fantasy type music including heroic tracks and battle music.

Gameplay:
Outside of events, players will be spending nearly the entirety of their time navigating menu screens or defeating groups of enemies in Gungnir’s slightly modified take on the SRPG combat system.  When in combat players are given a minimal amount of information, with only a limited number of attack options which are dependent on the weapon they are using and their experience with said weapon, though outside of battle players will need to worry about equipping their characters and balancing their team, all while trying to keep their team light enough to not fall prey to one of Gungnir’s unique mechanics, Time. 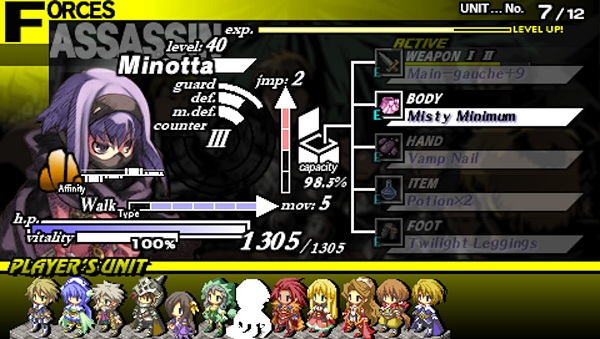 Like one would expect from a game of this type, combat plays out on a grid based area where players will need to take turns moving individual units into attack range and wipe out the enemy forces. Now while this may sound standard so far, the twist that Sting has thrown into Gungnir may toss a wrench in even seasoned SRPG gamers’ plans.

Gungnir has a unique learning curve due to the fact that the game handles unit turns and time passage in a completely different manner. For most SRPGs unit turn will either be determined by unit speed or position on the field, but in Gungnir every battle contains a unique time based system which includes hours, days and even months. As the battle plays out on the field time passes and every unit on the field must wait a certain amount of time before they act, also known as Wait Time.

Every little action in the battle will have a certain amount of Wait Time involved, with simple movements around the field and basic attacks taking only a small amount of time with some spells or special skills taking a number of turns to complete. Players can also choose to sacrifice a character’s max-HP to force them to make another action before their Wait Time is up, but this is a risky endeavor as the battles tend to be quite difficult at times and the loss of an ally can be extremely devastating to your survival, especially since non-story characters’ deaths are permanent, though they will usually retreat unless massive damage is given. 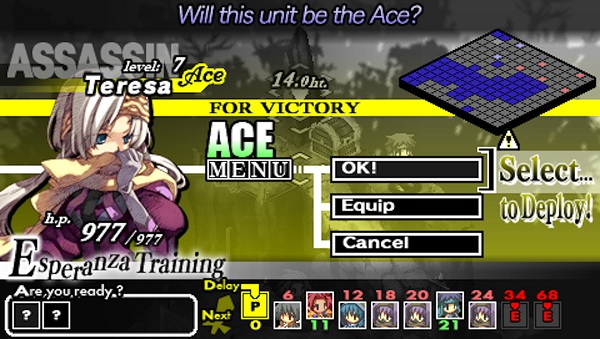 As you enter battle players will sometimes be able to select an Ace (General) for that fight. The selection of a proper Ace for your forces can swing the battle in your favor due to the fact that Ace characters provide bonuses to certain ally units, such as more attack power or shorter Wait Time. The selection of a certain Ace can also swing your decision to bring certain units into battle, as players will have a certain number of storyline characters as well as generic fighters that can be obtained and entered into battle.

Now managing your time is obviously one of the biggest parts of Gugnir’s combat system (you can even fail battles if they drag on too long), the other main mechanic is the Tactic Point system. As you move through the battlefield you will begin to accrue Tactic Points which can then be used to issue various orders such a scramble order which will move a unit’s turn to the beginning of the queue, which is extremely useful as a life-saving mechanic to avoid a killing spell blast or skill or even more useful for providing finishing blows to wounded enemies.

Outside of scrambling, players can also issue Beat and Boost orders which are basically combination attacks which allow the player to perform multi-character beat downs on a single unit (Beat) or assist another character with an action such as lowering an enemy’s block percentages (Boost). These commands can take a large amount of Tactic Points and the player is initially only able to hold a small amount of these. To gather more Tactic Points players must move to certain strategic areas of the map and capture “flags” to boost their total Tactic Point amount. Despite this option, it is still extremely foolhardy to use a large amount of tactic points as they can also allow players to deal more damage, loot bodies, change equipment and more. Plus, it is always good to keep a few tactic points on hand to save a targeted character from death. 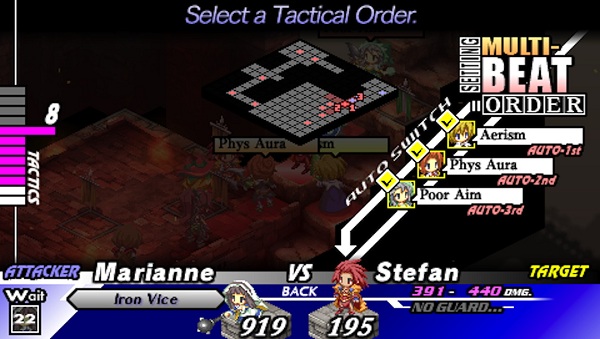 Interestingly enough, even losing a battle doesn’t always mean a game over. In fact players are given a chance to retry that battle with all of their stats and weapon mastery points gained from their losing effort. With the strange choice of not including a free battle mode for players to grind for experience, this is the only way to try to farm levels. Interestingly enough however, players are given stars depending on their performance in a fight and how long it took them, as such retrying often will result in a lower star rating. Stars play a minor role by providing bonus treasure in the next area for each star obtained.

Overall:
Gungnir’s storyline may struggle to keep you entertained but the game’s battle system will leave you enthralled with its unique mechanics to keep you coming back for more. It is worth noting that the game does include a New Game+ mode as well, which is very convenient for those who want to see another one of the game’s endings. While Gungnir doesn’t do too much to make itself stand out in the SRPG genre it does enough to provide an entertaining and lengthy experience.