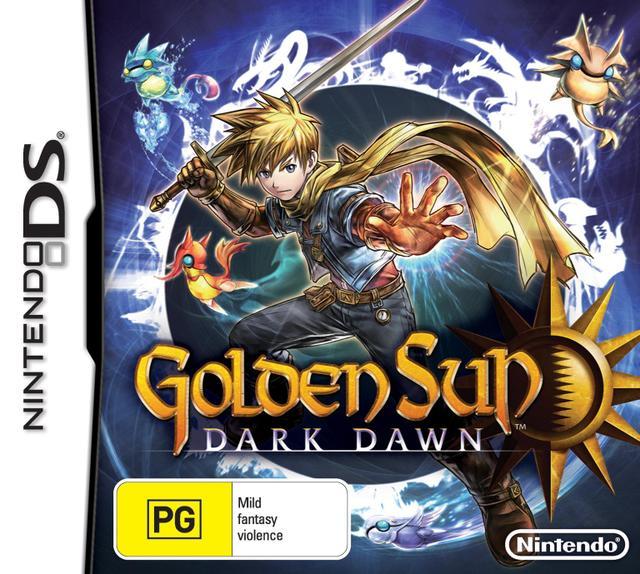 Nearly 10 years ago, Camelot introduced the world to Golden Sun on the Game Boy Advance. The title was highly successful and quickly became a household name in the world of RPGs, inspiring a sequel just a few years later. Fast forward to 2010 and Camelot have finally delivered the next chapter in the franchise with Golden Sun: Dark Dawn. Dark Dawn is set 30 years after the events of the first two games and brings a bunch of new characters along with new features to the series on the Nintendo DS. How does this title live up to it’s predecessors? Here is my review for Golden Sun: Dark Dawn. 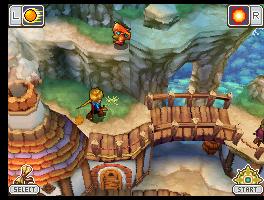 Story
When you start Dark Dawn, you are immediately thrown into the story with quite an opening, introducing you to the story’s main Protagonist, Matthew (or whatever you decide to name your character), who is the son of Issac, the hero from the past games. Other descendants from past characters such as Karis (daughter of Ivan), Tyrell (son of Garet), and Rief (Son of Mia) are introduced shortly after and assemble the main team of the game.

Setting 30 years from the the events in Golden Sun: The Lost Age, the game starts with Issac sending you on a simple quest with your allies but soon huge events start taking place as Psynergy vortexes have popped up all over the land and are draining adepts everywhere of their Psynergy power. It is now up to you and a few other descendants of the heroes from the past to find out why this is happening and set out to defeat the evil behind the chaos. 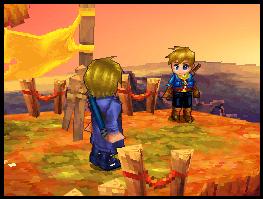 The story flows nicely through the main game, but the cutscenes can drag on a little bit too long (especially at the beginning of the game). Overall though, Dark Dawn does catch players who might not have tried the first two games up and is easy to understand. Each character have a level of depth to them and it is easy to like nearly all of the main characters in the game so getting drawn into the story shouldn’t be a problem for anyone. As you progress through the vibrant world of the game, more lively characters are introduced as the main plot slowly gets more interesting. What I mean by that is that it took myself around 7 hours to fully become engrossed in the main story as Dark Dawn has a bit of a slow start to really warm up, but once it takes off the game can be hard to put down. Fans of the past Golden Sun titles are surely to love the story from start to finish though as it stays true to the originals and several cameos from characters the past will make appearances to let you fully get caught up on the past 30 years of the story.

The story is told through text bubbles throughout the game so no true voice work is present, but the text does the job just fine and conveys the story in an old-school rpg fashion which should be a plus to fans of the classic games. There are also emoticons used to portray emotion for each character, but we will touch up on that in a moment.

Gameplay
Those who have played the first two Golden Sun titles will feel right at home as Dark Dawn sticks to the core gameplay that made those two successful and fan favorites years ago. While this one plays like a standard PRG through and through, there are many features that really divide Dark Dawn from other RPGs on the market today though and many of them come off as a refreshing way to play. 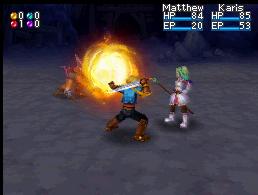 The first thing to mention of course is the bread and butter of the series, that being the combat system. As you jump into random battles you can easily level up each character to get stronger and gain new attacks, but where the true strategy lies is the Djinn. Djinn are elemental spirits you come across Weyward all throughout the game that can change up the way you battle all together. Each Djinn can be obtained by simply joining you or after winning a battle after encountering the creature. Once you obtain them, you can set it to an active party member and gain the spirit’s special powers and summons as you move along. The more Djinn you obtain, the more customization you can make as these are the key elements to having your party truly grow and with all of the choices in Dark Dawn, Djinn can lead to a lot more depth in the otherwise simple battle system classes. Djinn also have the power to be put on “standby” as you prepare for summon moves, which can unleash some devastating attacks to foes if used correctly. With these summons you also get the sheer joy of watching the high quality summoning of different beasts and mythical creatures which was feels very rewarding in itself.

Psynergy is also a huge part of the battle system as well, as your magical attacks performed in and out of battle with ease to attack a foe, heal and ally or clear a path that was blocking your way in different situations. The only problem I felt with most of the battle systems was not the strategy or Psynergy/Djinn, but how simple the difficulty really was. With such an interesting class system and refreshing way to progress, it is a shame that most battles can be won by simply spamming the same attacks over and over. 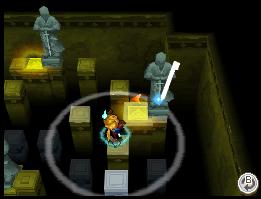 Even though the game is a bit overly simple for it’s genre, Dark Dawn pulls no punches when it comes to the clever puzzles in the game. Each area usually has one or more which add a lot of depth to the overall experience as you must think up ways to get the the next area. The puzzles all utilize Psynergy powers as well and with the quick one-button setting, puzzles can be an easy to learn and enjoyable sight once you discover the next as each feels a bit different from the next so you are not constantly doing the same thing over and over again. Most of the Psynergy that is used in the puzzle solving also involves the touch-screen as well and though sometimes you might find yourself pulling your hair out to pull a rock across the screen, the touch-screen was still a welcome method of execution for these encounters.

One thing added to the list of features is the use of emoticons to express emotion of characters based on certain dialogue sequences of the journey. For instance, you can tap on one of the four expressions and get a different reaction from the character you are interacting with. While these are a welcome addition, they are not too useful as nothing is effected in the story except for maybe a sentence of dialogue. I do however feel like if there is another Golden Sun title down the road, Camelot made an excellent template to make the series much more open-ended story wise.

Graphics/Audio
The visuals in Golden Sun: Dark Dawn are without a doubt some of the most charming and vivid on the Nintendo DS by far. The whole world is booming with life and color in full 3D. The characters also have a great artwork design with a bit of cell shading that make each stand out on their own. Each monster or boss you encounter also each have a cleverly designed model as well so it is always a treat to run into a new enemy. As great as the in-game graphics are, the way the two-screens are utilized during cutscenes and summon attacks truly pushes the DS to the limit with beautiful 3D animations that transfer from screen to screen, having you tie together both as one big production. This isn’t the first time this method was used on the DS, but Dark Dawn might be the game to say it did it the best. 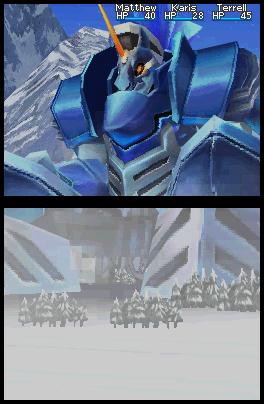 The music in the game is fitting with each environment, with each tune bursting out as you go into battle or enter a new area, you are sure to want to keep the volume up as you are playing through the game. As odd as it sounds though, whenever a character is talking using a text bubble, some of the sound effect used sound a bit off and awkward. This isn’t the case for all characters, but with such a great soundtrack, the sound of a grinding “klink klink” noise used to show off the speech can actually make you feel like you are reading instead of paying attention to the story as it takes you out of the game a little. Just a small nitpick mainly, but other than that, the sound nearly matches the already high presentation value of the game.

Overall
Golden Sun: Dark Dawn is a superb follow-up to the Golden Sun series. The somewhat slow and dull storytelling is easy to overlook due to the complex and easy to use battle system in the game where you can always customize your team to best fit just about any situation. High presentation value was one thing Camelot nailed with this one as well as battling and using new attacks can almost be just as rewarding as progressing through the overall story. There really is nothing wrong with Dark Dawn whatsoever from an RPG standpoint as it keeps the core roots alive and adds to that with some innovative features, but watering down the difficulty may turn some players away as it leads to a much shorter experience than the previous two titles. Either way though, this title an excellent addition to any DS owner’s collection and is a worthy induction into the much loved series of Golden Sun.

I Give Golden Sun: Dark Dawn :