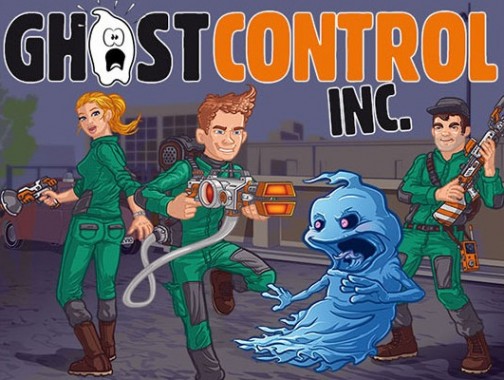 Indie developers Bumblebee are having quite the run of successful Kickstarter projects, with GhostControl Inc. and open world RPG Days of Dawn both trouncing their funding targets. Both games are heading to PC, Mac, and Linux, with GhostControl announced in May last year and first out of the gate- Days of Dawn is slated for a tenuous February release.

The offspring of Theme Hospital and the original XCOM (plus various other inspirations, most obviously the original Ghostbusters), GhostControl Inc. tasks the player with running a successful ghost hunting business that hauls in the cash as well as the ectoplasm, promising “a hilarious ghost hunting simulation”: a free demo of the game is to be had here. 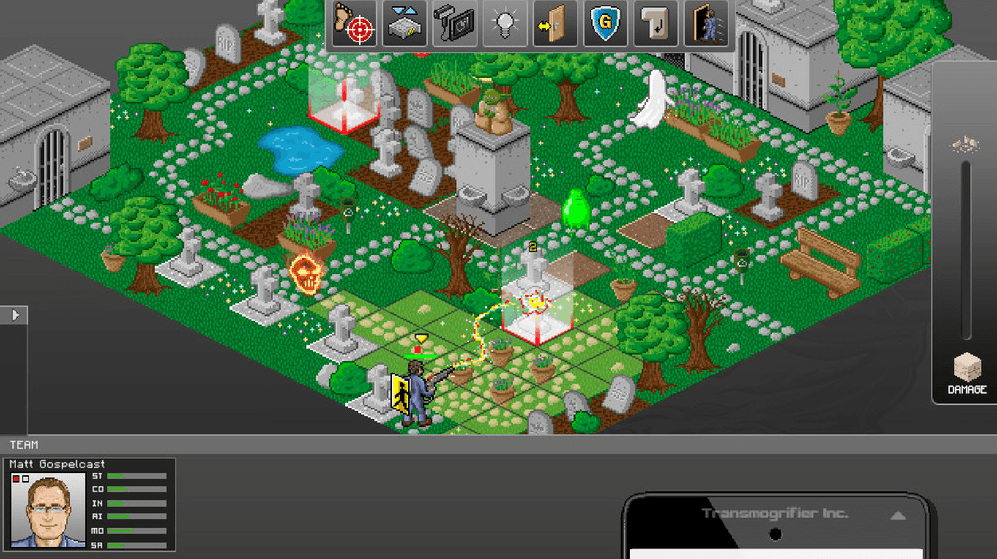 The aforementioned offspring of business sim and turn based strategy manifests thus: manage the ghost hunting business by recruiting ghost hunters, wisely managing funds to buy fuel for the battered car to take them from job to job, sink some cash into new weapons and traps every now and again, and keep the staff sane with frequent trips to the hospital. Use all of of the above to clear out locations quickly, trapping ghosts with minimal impact on the team and the location and raking in maximum profit.

This is all managed through the map, which has players drive their team around the miniature streets of London. Populating the map are equipment stores, gas stations and the hospital, as well as the HQ and its more upmarket replacement.

The HQ is limited to acting as a save point and hiring hub and there is little to do between jobs, to the extent that the game even provides a fast forward button. There are other ghost hunters trawling the map, and they can steal jobs if Ghost Control Inc. is too slow on the uptake (or happens to be on the other side of the map). The need to succesfully pull off jobs is high, as gas and hospital treatment are expensive and frequently required.

It’s a good set up, but one that is marred by some of the random and repetitive elements of the turn based part of the game. 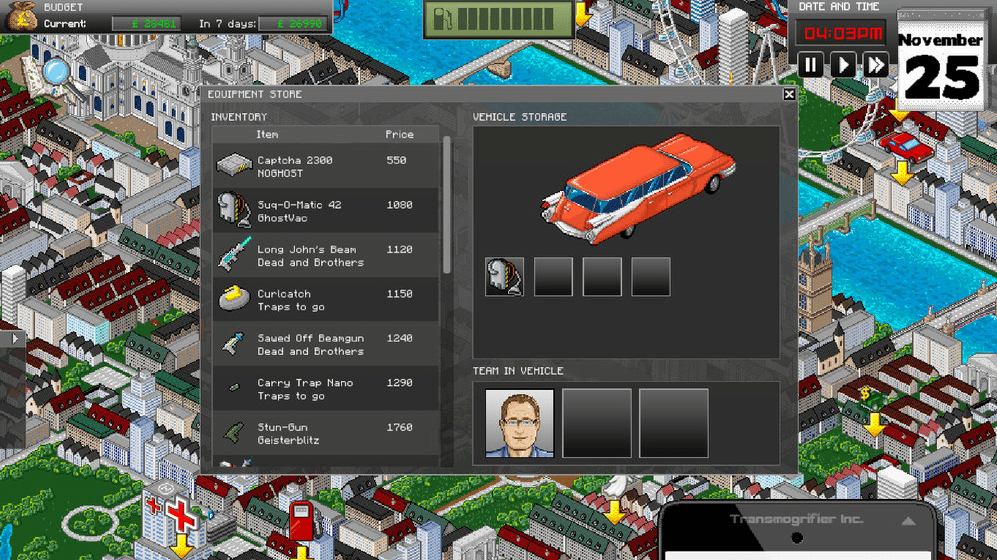 Heading to a job pulls up the prep screen, which allows each member of the team to be given their on hand equipment -usually a weapon and a trap. Inventory is limited by the team’s carrying capacity, and the team is in turn limited by the number of seats and storage spaces in the vehicle, which like the HQ can also be upgraded.

Each member has two action points, which can be spent on the usual actions such as movement and shooting. In addition to the standards Ghost Control has commands to switch on lights (ghosts in turn can switch them off), open doors, and guard; an ability that isn’t unlocked until a good few hours into the game, a shame since it allows for a greater depth to the strategy that would be welcome in the oft repetitive opening hours.

Ghosts populate the environment, and will destroy the objects in it if left to their own devices, eating into the profits of the job. Bringing down the energy level of a ghost makes it susceptible to a trap, which has a limited capacity and needs careful placement (and a bit of luck) to work successfully. 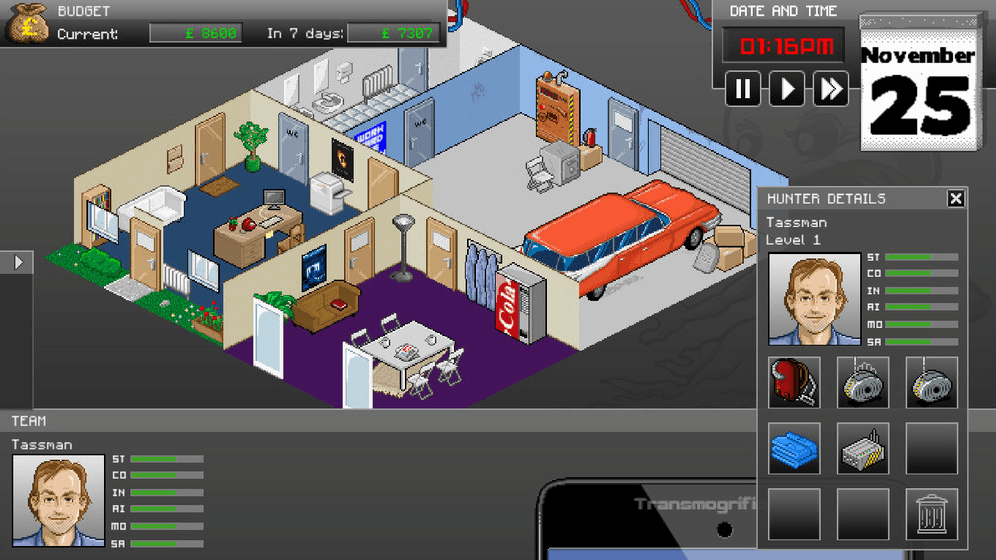 Different ghosts have different energy levels, and different traps operate at different efficiencies. Weapons too can be a game changer; with some able to push ghosts away as well as damage them, and others can pull ghouls towards hunters.  Position and keeping your distance is everything, as getting too close to the ghouls is a sure fire way to deplete the team’s sanity.

Sanity is GhostControl’s equivalent of health. If it should sink too low the hunter will be running for the door, bawling their head off every action point of the way. Sometimes they will stop and become functional again, sometimes they won’t – the mechanism behind this isn’t entirely clear. Should the sanity metre be killed off completely the team member is permanently fired from the team because of the unfortunate fact that they are now locked in a mental asylum.

In addition to sanity every team member has a full set of stats that can be affected by ghosts through status effects such as curses and stuns – these values can also be increased, allowing hunters to develop over time. The whole process is as mysterious as the sanity/fleeing process, and the lack of transparancy to the system really kills the game’s accesibility. 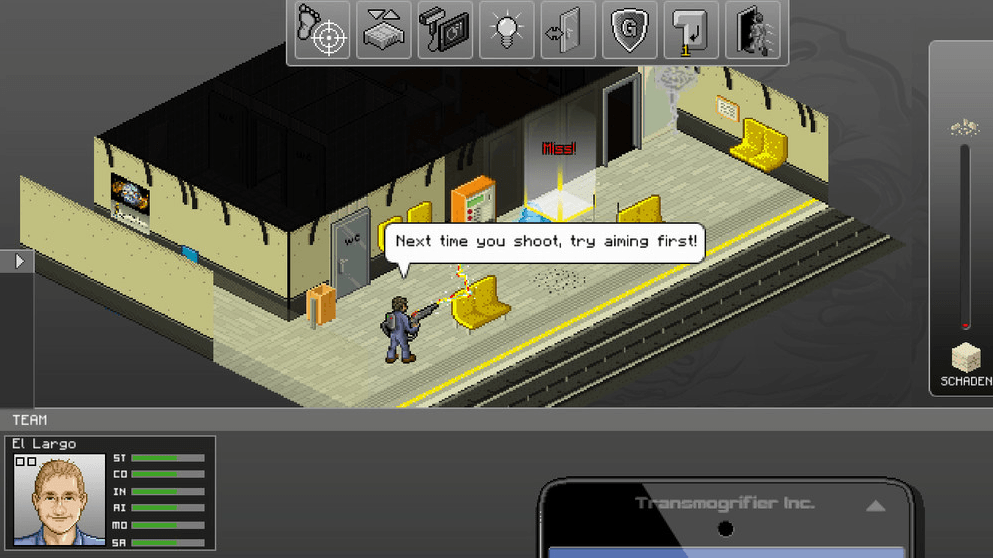 The turn based counters do have a decent level of challenge and require a bit of thought, but unfortunately the numerous unknowns and repeated elements prevent the gameplay from becoming addictive. For the first few hours the same ghosts will be encountered over and over, and to make matters worse the hunters will spew out the same terribly unfunny lines of dialogue over and over again.

The lack of humour is what really kills the experience, as a decent chuckle here and there can quite easily distract from other flaws. Unfortunately GhostControl, despite boasting some level of hilarity, is barely capable of raising a smirk. Hunters come out with some absolute drivel, and my team seemed obsessed with blurting out “the smoke gets in your eyes!”, a line which quickly drove me to my own personal asylum.

Initial expectations are given a boost when the opening, Ghostbusters-eque theme of GhostControl Inc. comes to life, following on from a quirky warning about the perils of playing the game – “Note that it may be an allergic reaction to ghostly phenomenon if your eyes start burning”etc.

That opening salvo is the high point though, with the other elements of Ghost Control never quite delivering on the promise. The rest of the music is repetitious to the point that other people in the house will ask for it to be changed, and the sound effects are a tad too much on the tinny side. The sound of the hunters fleeing is of particular grief as it repeats constantly as the spooked employee moves out of the level action point by action point.

There is an argument to be had about all this simply being in the retro indie spirit of things, but GhostControl doesn’t have the spark necessary in other areas (looking at you sense of humor) to make the presentation slide down a bit better. Some will doubtless enjoy the spirit of the soundtrack; others will boot up their tune dispensary of choice and never hear a peep from Ghost Control Inc. again. 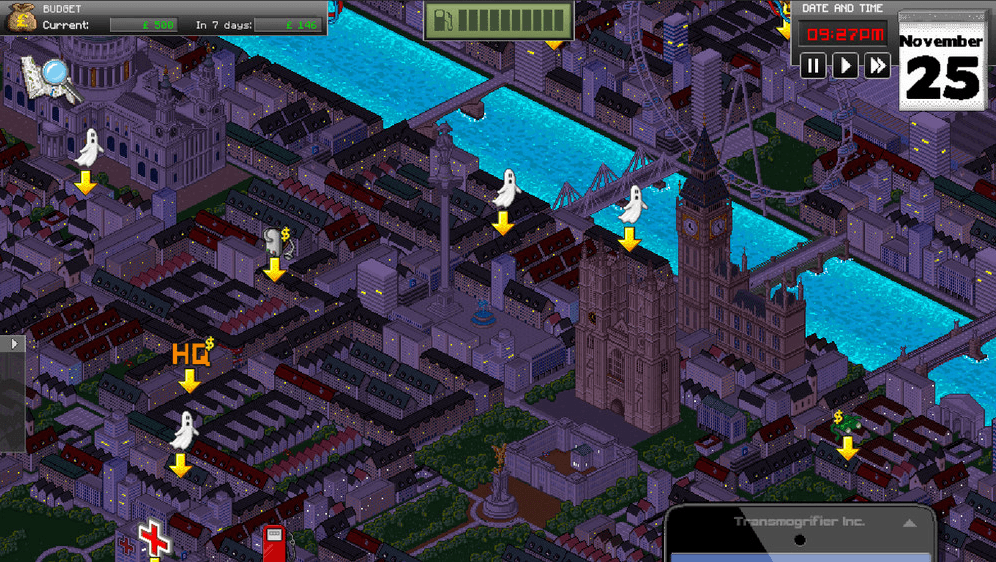 In the visual department it’s necessary to trundle out the good old retro catch all again, as Ghost Control Inc. presents itself much like a classic 90’s Bullfrog title. The environments range from houses to tube stations to restaurants, and there’s enough detail in each to keep things fresh for a good chunk of time, though the limited ghost character sprites suffer from being stuck on repeat. The gameplay area is curiously small and unscrollable, filling the screen with a dull grey background instead of anything of importance.

The world map is a gorgeous little recreation of London in miniature, with landmarks like St Paul’s Cathedral and Big Ben (Elizabeth Tower you purists) adding the necessary flavour. One of the offerings of the Kickstarter campaign was an additional city to roam around, but given that particular funding goal wasn’t reached it remains to be seen whether another location will be hitting Ghost Control soon.

A triple A concept marred by C grade execution, GhostControl Inc. sorely needs a few more coats of polish before it can hope to graduate to an indie must have. Whilst the turn based element takes a decent stab at things, too much of it is random, leaving the player in the dark even when they do take a look at the manual. The sound design feels cheap, and whilst some of the presentation does hint at high quality the whole package lacks the charm and laughs needed to surpass its retro/indie limitations and become something great.