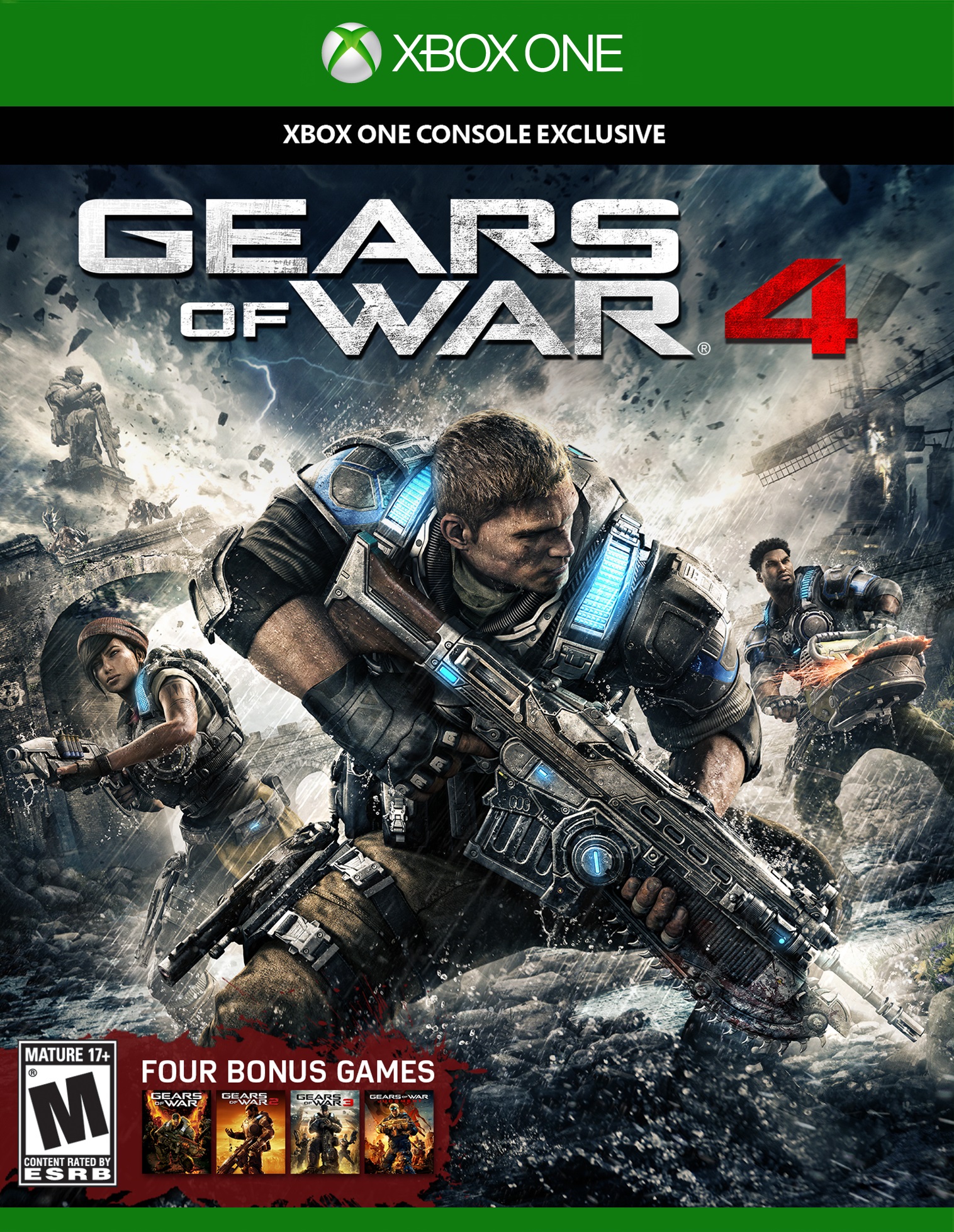 For many years Gears of War thrived as players followed the story of Marcus Fenix and the rest of Delta team struggled against the Locusts in an effort to save humanity. When the third game in the series was released it managed to wrap up this conflict in a satisfactory manner but now years later Gears of War has returned. With a new developer at the helm and a new story to be told in Gears of War 4, how has The Coalition faired?

Twenty five years have passed since the Locust and the Lambent forces were eliminated and peace became a real thing for the surviving humans on Sera. After giving players a sample of some of the largest conflicts that were fought over years by the COG The Coalition closes the chapter on the Locust War within the first twenty minutes of the game. The problem is, since the Locust War cost so many lives the COG (Coalition of Ordered Governments) have created special settlements where the surviving humans are meant to live under the strict supervision and propaganda of the COG forces. 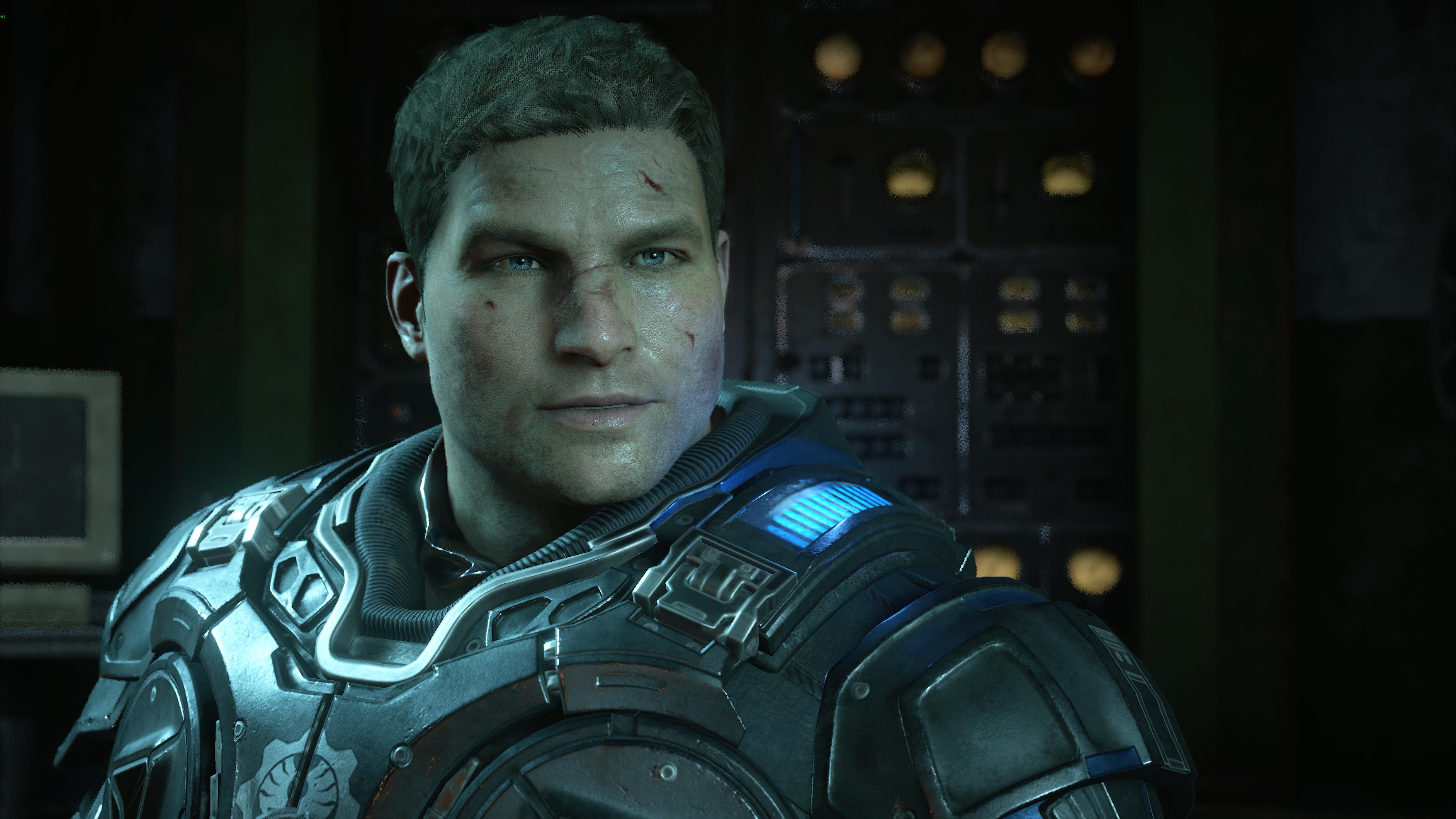 As one would expect, not everyone is willing to sacrifice their freedoms so willingly. As such there are a number of individuals who have rebelled against the COG and now live their lives in villages outside these walled cities, deemed Outsiders by the government. The story this time around follows JD Fenix, his childhood friend Del Walker, and Kait Diaz with the former two leaving the COG and joining forces with Kait and her Outsider village and family.

With Outsiders only able to really thrive with goods they pillage from COG factories and storehouses, JD and his group encounter some heavy resistance against new foes, mechanical peacekeepers called DBs, when attempting to steal an important item that appears frequently throughout the game in order to help restore their village. This conflict hints at something far greater and that dangerous threat rears its head after JD and the rest end up being the only ones left standing after a strange threat steals everyone they know and care for away from the village. Left with very few clues and no assistance, JD turns to the one man that might be able to help, his father Marcus Fenix. 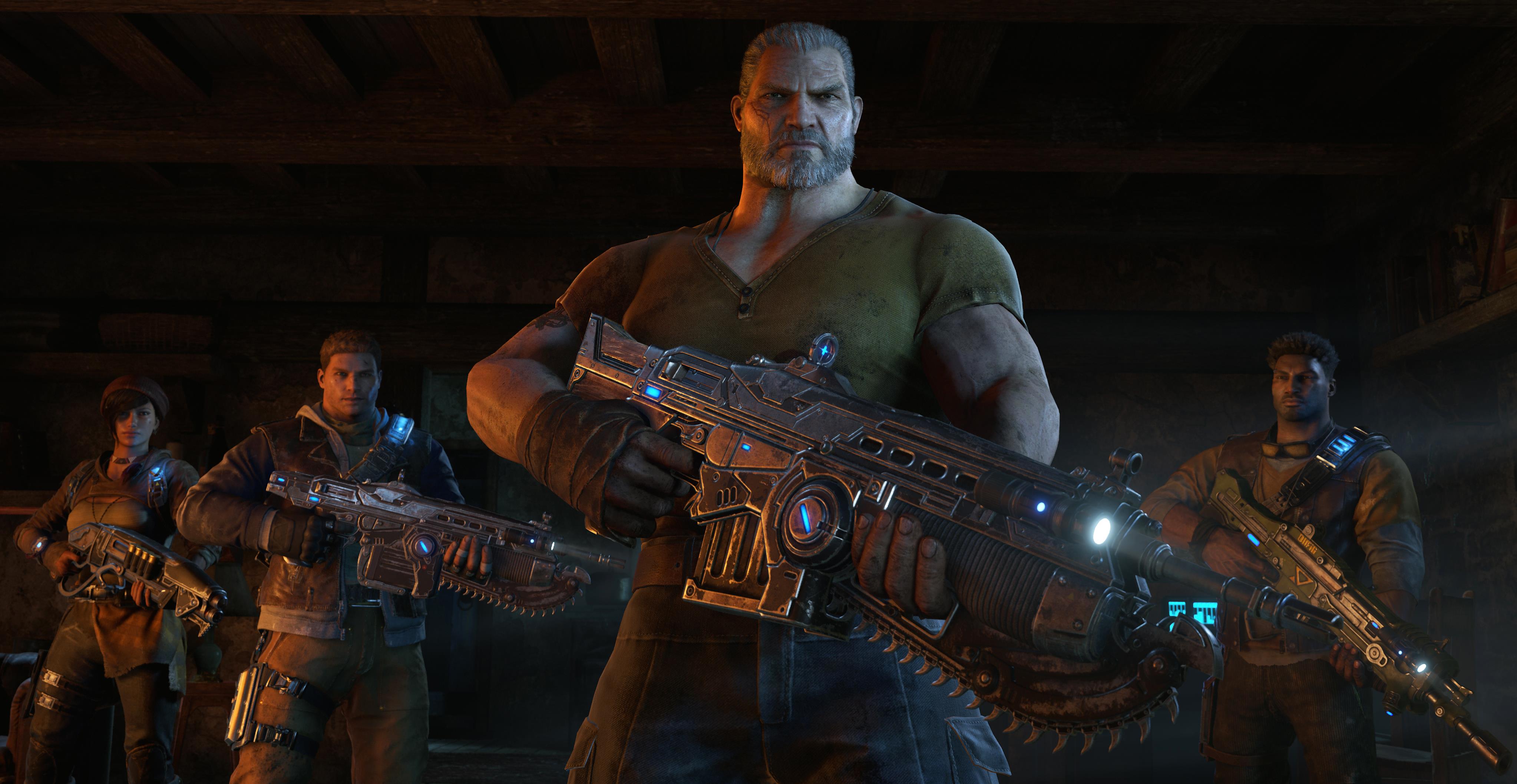 It is interesting to note that Gears of War 4 feels like a far more focused storyline than one might expect from an action game as it features quite a bit of mystery and horror elements mixed in with the standard shooting sequences as the group searches for those they’ve lost. This is helped out by the fact that the new characters are a far more enjoyable and lively group than anything we’ve seen in the series before. Not only are they more talkative and jovial in nature as they explore various ruins, examine the oddities they come across, and attempt to overcome absolutely ridiculous obstacles. Various actions or things players can examine including collectibles they gather can bring up additional dialogue and helps make the cast far more likable and more relatable despite being fresh additions.

The relationships between JD and his father as well as Kait and her Outsider family are explored in some nice ways though it is worth noting that a few characters are given only a bare minimum level of depth, with Del given only a few small details revealed about him throughout the entire game. With this level of character development for most of the cast and a well-paced storyline with plenty of small touches and details to be revealed, players will find themselves in for one hell of a treat when it comes to the campaign mode here, though it does end rather abruptly and leaves plenty of hanging threads and briefly mentioned territory that will likely be tackled in the next entry.

There’s a saying that as long as something isn’t broke, don’t fix it and that applies to many elements of Gears of War 4’s combat as most elements will feel very familiar to fans of the series and a few new implementations help spice things up. Players will utilize the smart over based system to move around and dodge enemy fire while participating in firefights with whatever enemies they are facing at the time and using the familiar and exciting active reload system to get back into the action faster with a small boost when performed perfectly. 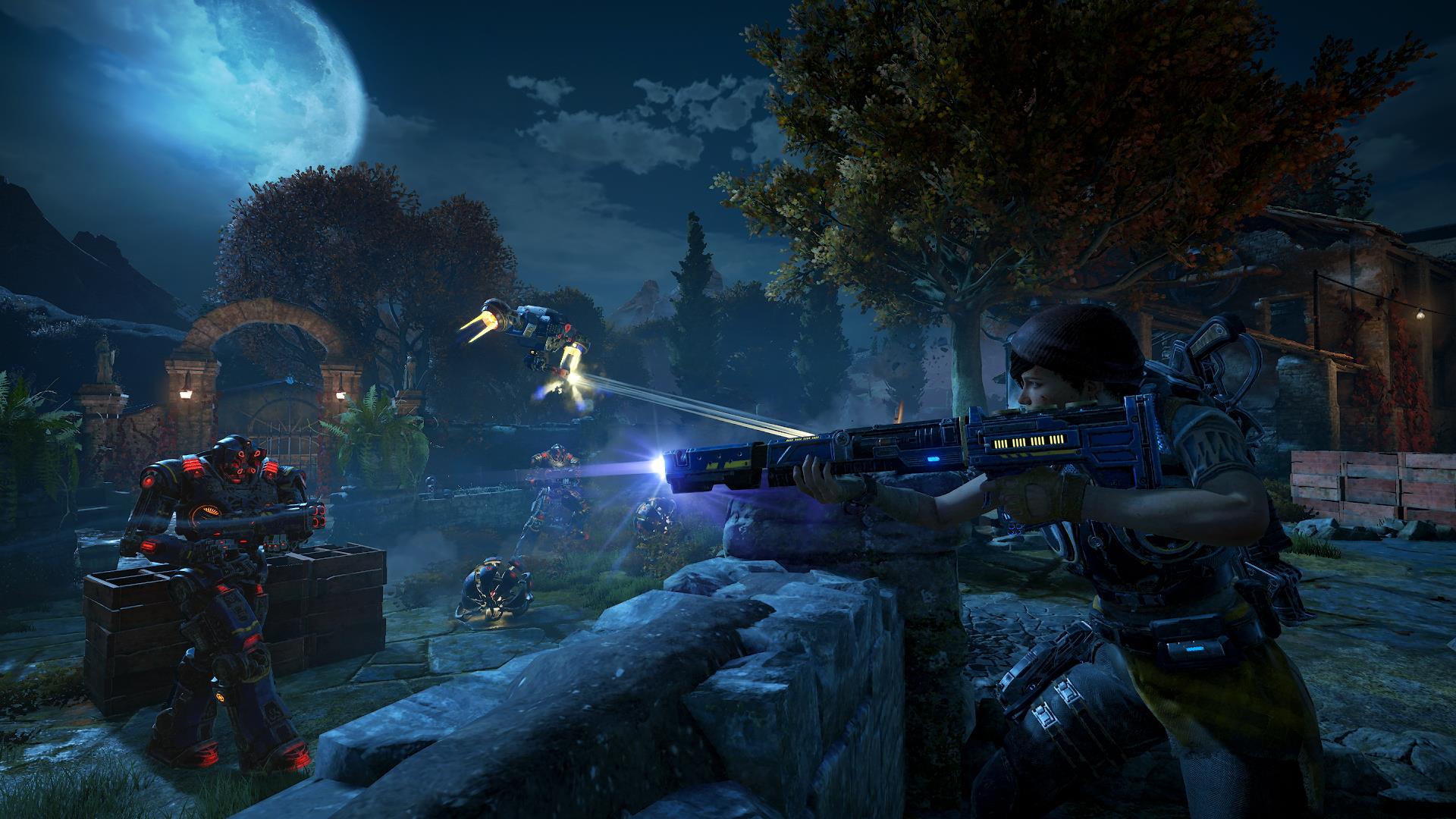 The campaign co-op has been limited to only two players this time but thankfully the companion AI has been improved to make them far more useful in a firefight as they are more willing to move around and seek cover and draw enemy fire and less likely to clump up to the player characters. It is also interesting to note that the title does like to implement a feeling of false hostility at times since there are a large number of areas that players might feel like things will go down at a moment’s notice thanks to the design and layout of the area only to simply be a place for exposition or exploration.

As for the enemies players will be facing off against, the two sets feature some variation on their tactics. The first forces players will encounter are the DBs, which are robotic enemies designed by the COG to keep peace in settlements and put a stop to Outsiders and not only do these robots utilize cover fairly well, they are also well aware of their disposable nature. They will often charge straight ahead at the risk of dying or, in the case of larger ones, will actually attempt to self-destruct to take you down with them. This is added alongside new enemy types that fly and utilize shields as well as variations of exploding foes that can be punted away to avoid damage. 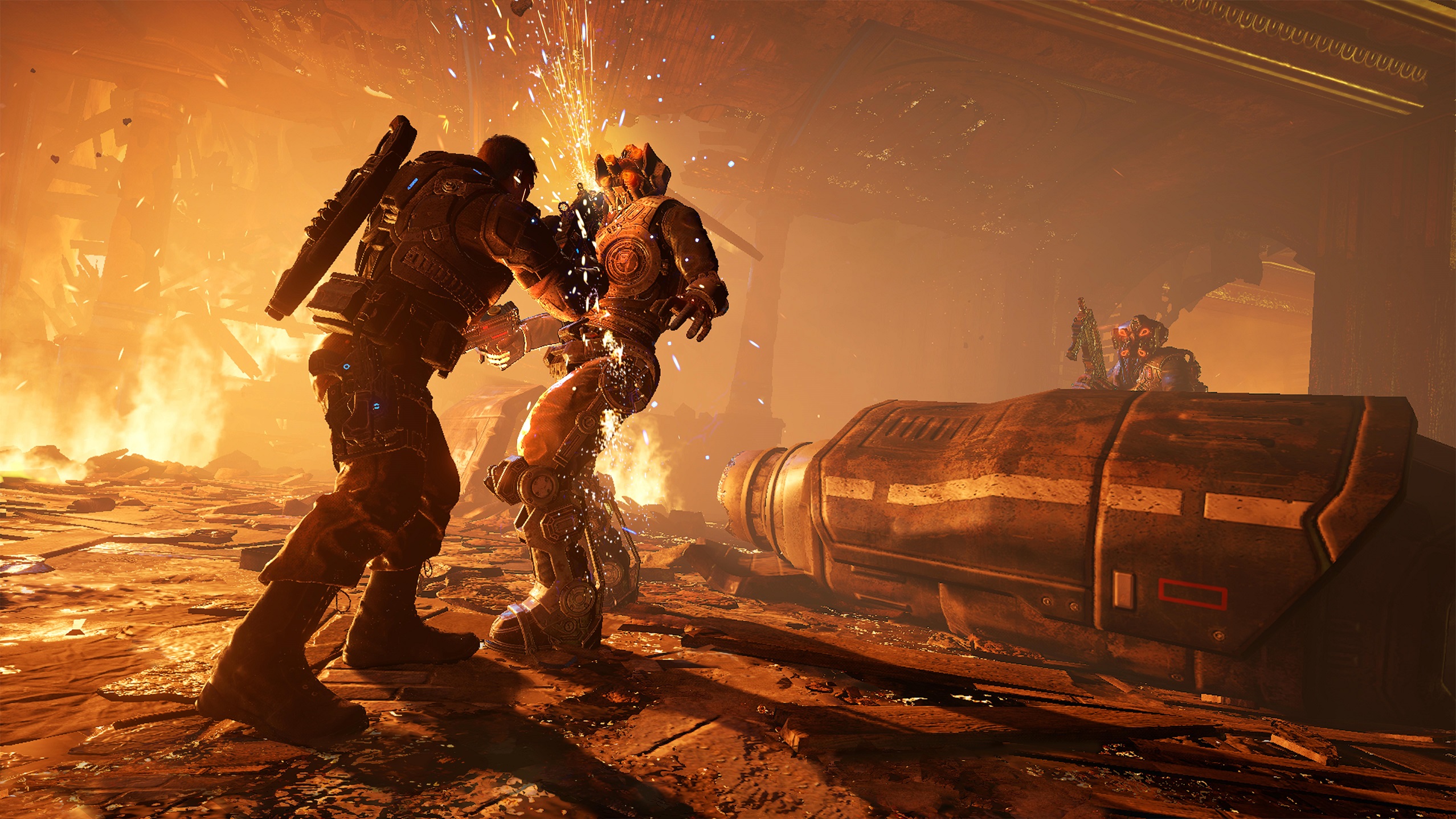 The swarm, the main enemies that appear later on, are a bit more standard as far as enemies go but also are rather unpredictable. This is thanks to the fact that there are a large number of types that the player will come into contact with and the environments you battle against them in. Often a fight against the Swarm can grow complicated thanks to the fact that they can literally pop out of sacs that hang on walls or even serve as cover and if damaged enough might spawn a new enemy for you to deal with.

Combine these enemy types with the new Windflare element that comes into play from time to time and affects the trajectory of projectiles and also allows the player to often use the environment to take down enemies and you have a game that always likes to keep things feeling fresh. Add to this a handful of new weaponry to make use of, both in regards to the DBs and Swarm, the new yank n’ shank mechanic that allows players to grab an enemy from behind cover and execute them with a knife (this can and will happen to the player as well), and the ability to counter close combat moves such as sliding kicks and you’ll find that there is quite a lot of fun to be had here as not only are the new mechanics a great addition but the old tried and true combat systems still shine today. 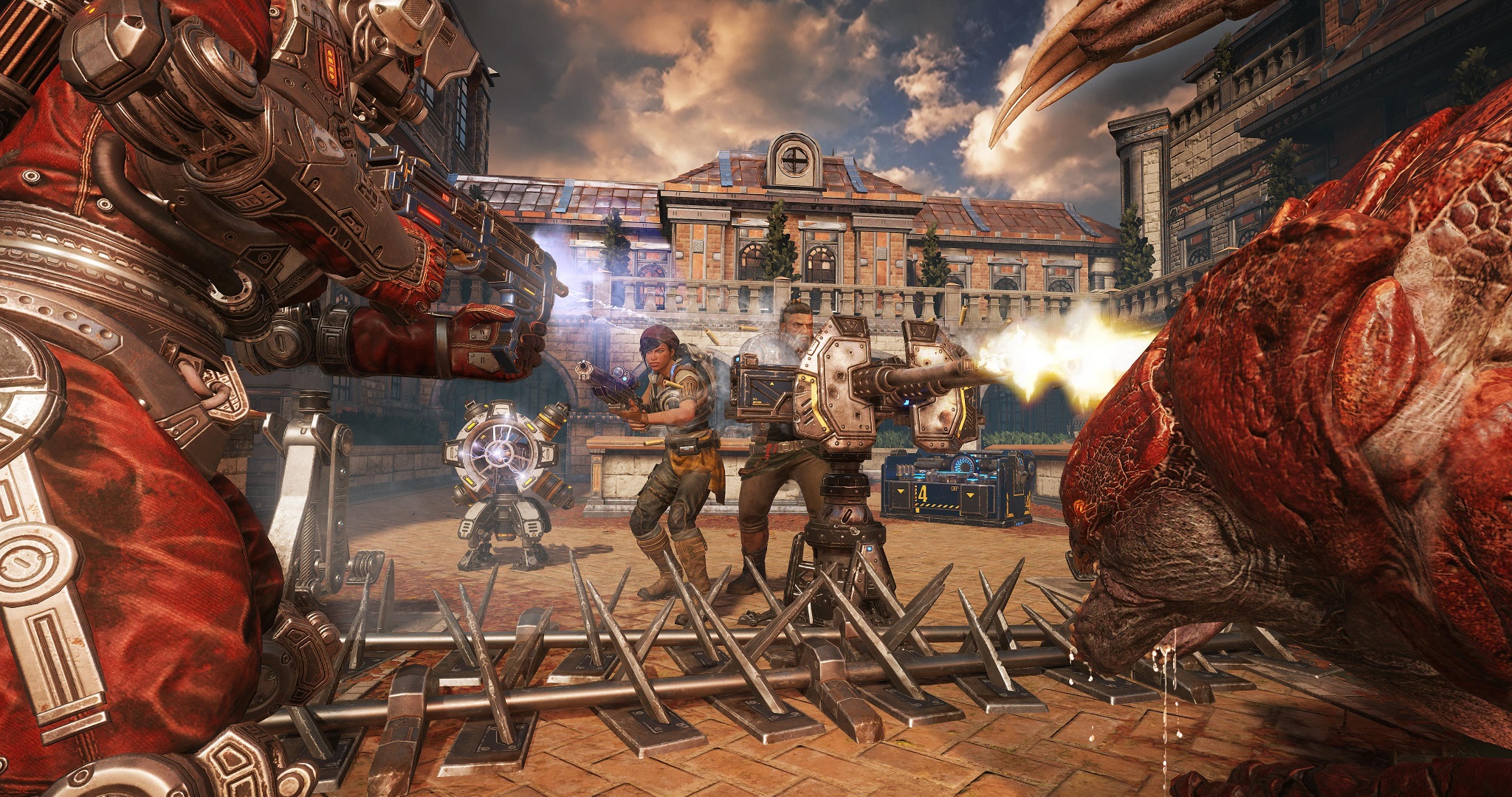 Outside of the campaign mode players will find that they are able to access the standard multiplayer mode as well as the revitalized Horde 3.0. The multiplayer sessions feel incredibly fluid thanks to the company aiming to increase the frame rate in this mode to 60 frames per second over the standard 30 for the campaign and a large number of modes are made available to try out including the intense Dodgeball gimmick mode that gives each player a single life and killing an opponent means reviving a teammate or Arms Race that swaps the entire match’s weaponry after a set amount of kills. The new maps on offer are varied well enough for most playstyles though it does seem like the whole shotgun mechanics still play a fairly large role in most situations, though the yank n’ shank can help in these situations.

Horde 3.0 is demonstrated a handful of times throughout the campaign by giving players a small sample of what to expect. This time around a movable construction unit called the Fabricator is used to spawn in defenses as well as new weapons for the players to use with power being given to the Fabricator anytime the player gathers points from killing enemies or grabbing dropped power in the field. Players can also select from a number of different classes to play in Horde 3.0 though the balance of some classes is a bit off in this regard. 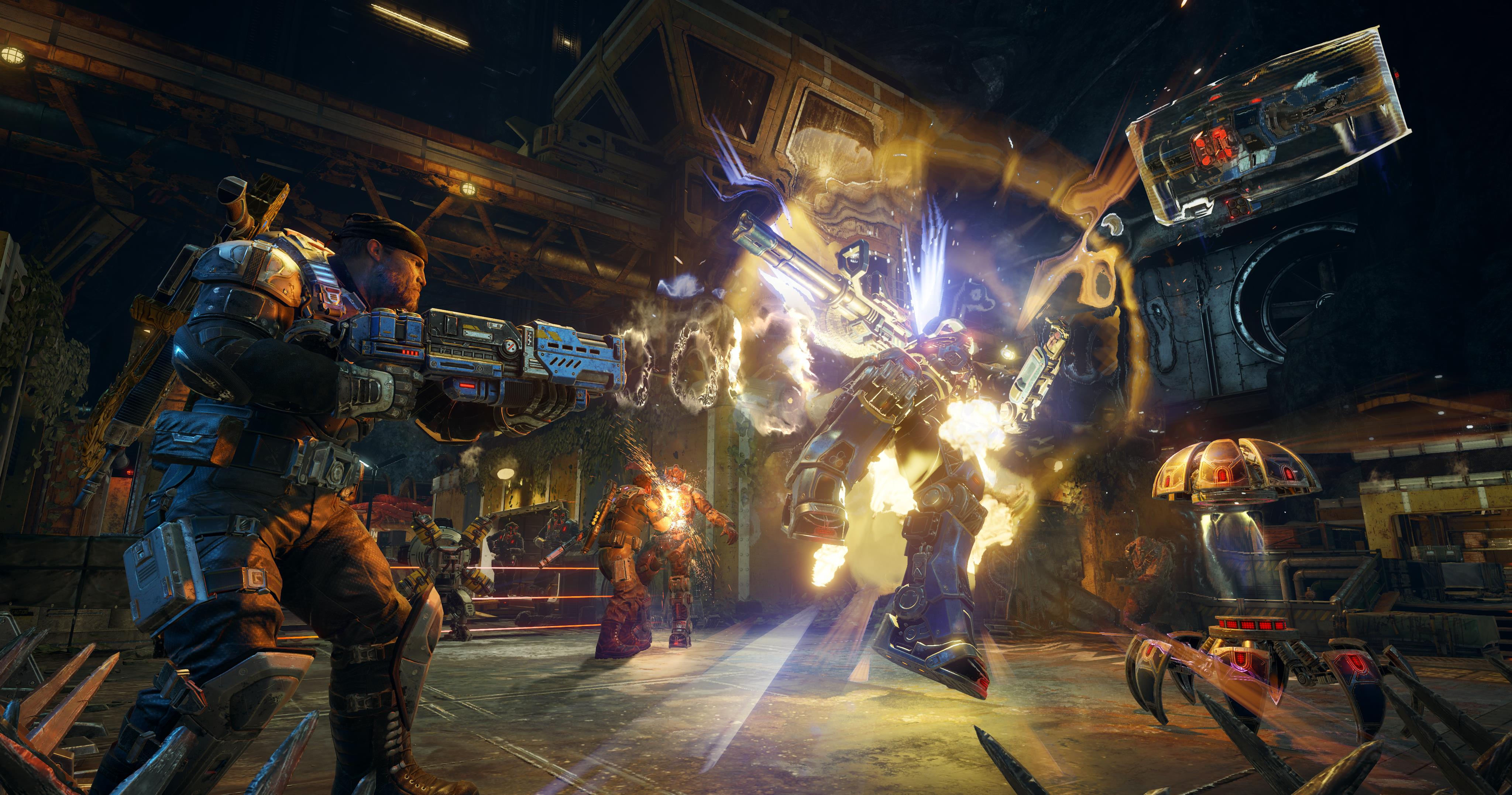 Scouts and Engineer classes are practically vital to the survival of any team in this mode now thanks to the fact that Engineers are the only characters that can readily repair and provide ammo to fortifications and since Scouts gain extra energy points from defeated enemies, they are key pieces to a team that may simply fall apart otherwise regardless of how skilled the players might be. Then again, since each class can be leveled up and equipped with various cards that boost certain aspects of their chosen class and help give them an extra edge in battle players can readily choose to play as whichever class they feel most comfortable with without really losing too much of their edge.

For a series that was often described as being various shades of gray and brown Gears of War 4 looks to blow those expectations away. Not only are players given a wide array of areas that they can fight in at various times of day but these areas are vibrantly designed with a wide range of colors being used to give the world life. Add to this some absolutely gorgeous level design and some outstanding weather effects whenever a Windflare is on the horizon and you have a gorgeous game. This is especially true when it comes to the designs of the enemies and the new characters that are introduced in this entry. 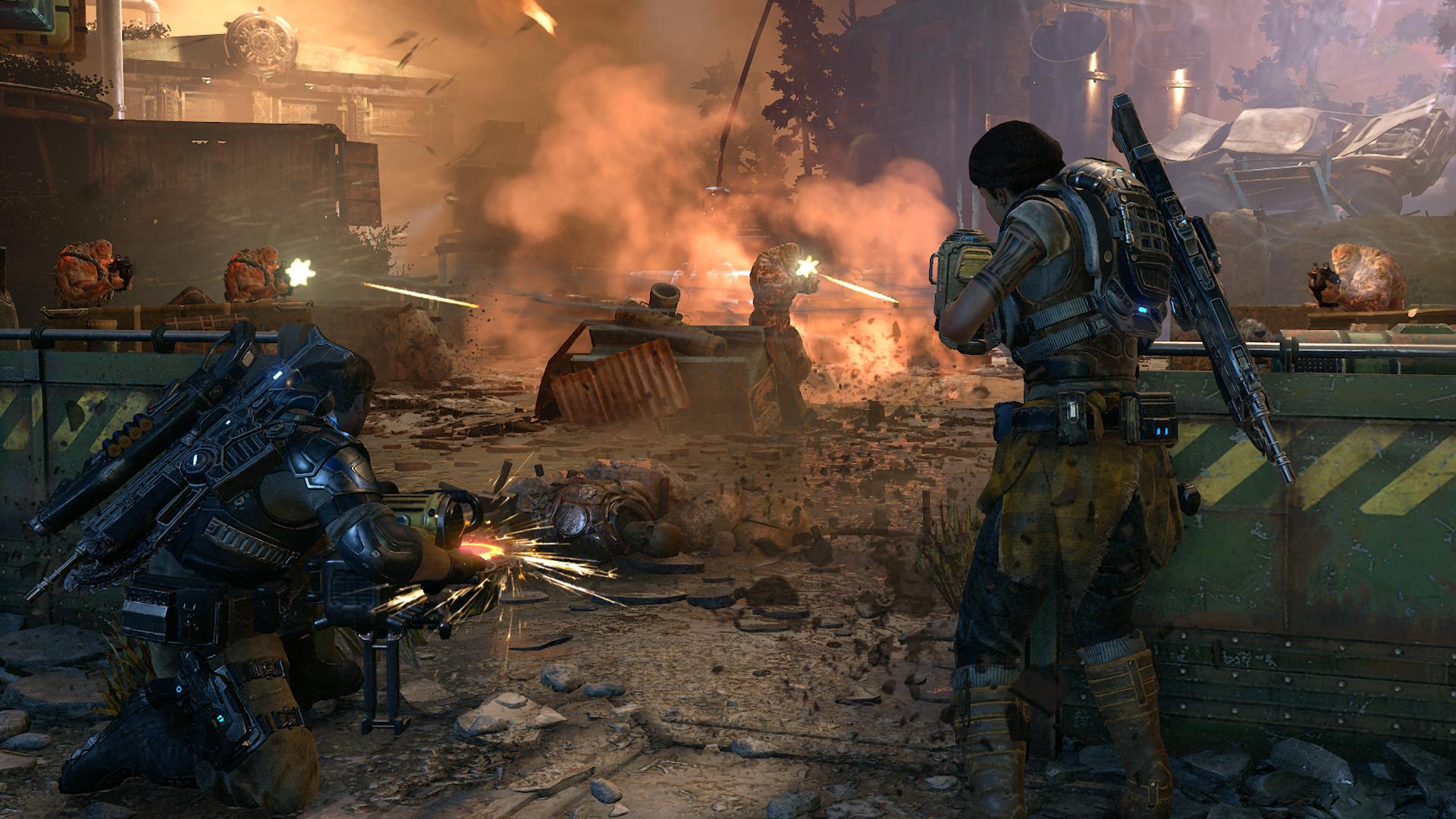 The soundtrack accompanying this title is a great fit for the series and features plenty of satisfying tracks to battle through and it is worth noting that the signature tone to signify the end of a conflict remains. The voice work is incredibly well handled and considering how much rides on making sure the players invest in these new characters, it is great to see the dialogue given justice here.

The Coalition had quite a challenge to tackle with Gears of War 4. Not only did the developer have to fill the shoes of a previous company but they also had to reintroduce a fresh batch of characters and a new conflict into a world that seemed to have come to a conclusion. Thankfully they managed to handle this challenge exceptionally well. Gears of War 4’s campaign may leave plenty of hanging threads but with more games almost assuredly on the way and combat mechanics that feel as great as ever, especially with the new additions, Gears of War 4 shows that the series is in good hands and fans will find plenty to enjoy.

Gears of War 4 utilizes plenty of familiar mechanics and builds upon them in a great way to deliver a satisfying introduction to a new storyline following a likable set of characters that will keep fans excited for the series while delivering solid multiplayer modes that will keep players busy for quite some time.
9