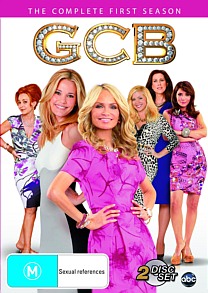 Texas is a funny state, especially in their recent efforts to separate from the rest of America following Obama’s election. They’re very different and proud of that, there is a very certain type of personality that follows with being Texan, and that is what GCB is about

GCB stands for Good Christian Bitches, and that pretty much sums up this show. GCB is based around a town in Dallas that is full of Christianity, Texans and… Well, bitches. The South isn’t exactly the most popular area for American TV shows to be set, but the comedy of the show certainly fits well with the off-kilter way that ridiculously rich Texans live, talk and act. It shows off that crazy Texan way of life, and is tongue in cheek, as well as having a charm to it that makes you love it.

GCB starts with the husband of the main character Amanda running off with millions of stolen dollars and her best friend. Amanda is then left having to move back to Texas from California since all of her assets have been seized. The fact that when she was in high school she was a cruel, popular girl means that her return isn’t exactly welcome. 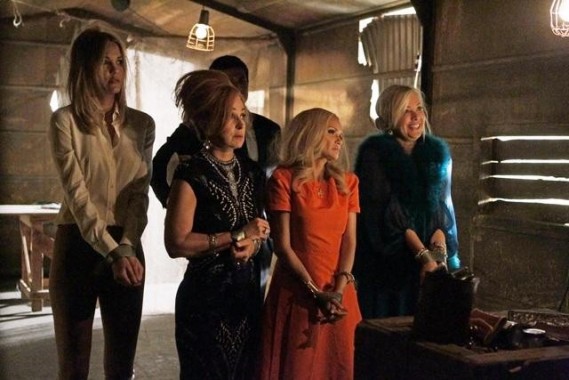 GCB is quite hilarious, not only because of the writing, but the acting. Kristin Chenoweth, who plays one of the main characters Carlene, is hilarious and has the ability to really time her lines well. More than once I found myself cracking up more than once at a stunt, line, or expression that she’d pulled.

Not that Chenoweth is the only funny thing in the show, the whole main cast works brilliantly together. They all pull off their comedic roles and have great chemistry with each other, plus the characters are so different and yet they fit together brilliantly.

The storyline starts off fairly linear and without a whole lot of depth, but over time it unravels into a few different directions and the characters that may have been a bit two-dimensional at first, gain a lot more to them and you end up falling in love a bit with the characters and really caring for them. 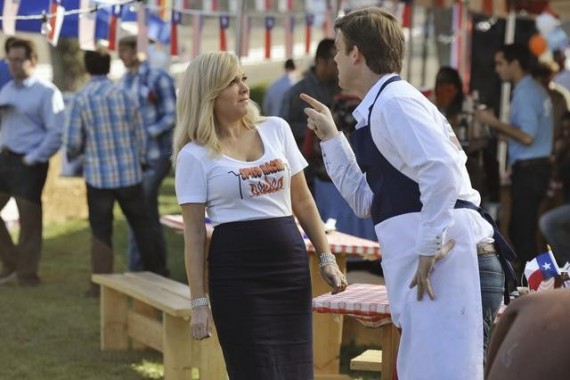 Even though the show is based in Texas, the land of the male patriarch, the show is full of strong, successful women, and it manages to subvert such sexist ideals while somehow upholding them as well. It’s this great balance that doesn’t make fun of the Texan life, but makes you feel like you’re a part of the joke as well.

Even though there are only ten episodes, so much happens in them and it’s a shame that there are only the ten episodes. Each episode is themed after something Christian, but it never really gets preachy. The amount of religion that is in the show is also tempered with humour and a steady balance between genuine religious sentiment and laughing at it.

There are some story line which are brought up with no clear purpose and dropped afterwards, but that may have been due to the small amount of episodes that the show was given. It is never really allowed to take wing and develop as much as it could, and once it gets really interesting it ends. 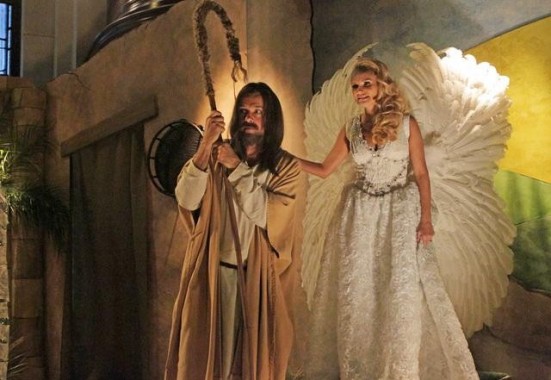 The set of GCB is breathtaking, absolutely huge and reflects the excess of the Texan nature. The sets reflect each character, as well as the absolutely ridiculous nature of the excessively rich society. Texas is a state with such a personality, and it is reflected brilliantly in the show.

Not only in the sets, but also in the wardrobe, hair and makeup that the characters go through. Everything that is worn by them, barring the California-influenced Amanda, screams Texas, as well as their own unique personalities.

The soundtrack of GCB works brilliantly to emphasise and bring out the Texan, religion and comedic moments. Most of the scenes are accompanied by the Texan twang of guitars. Plus, you get a few great songs from Kristin Chenoweth, as well as Miriam Shor. These are done mindfully and are representative of their characters, rather than a show of their actual talent (especially as Chenoweth is a Broadway star and has a ridiculously strong voice for her tiny frame). 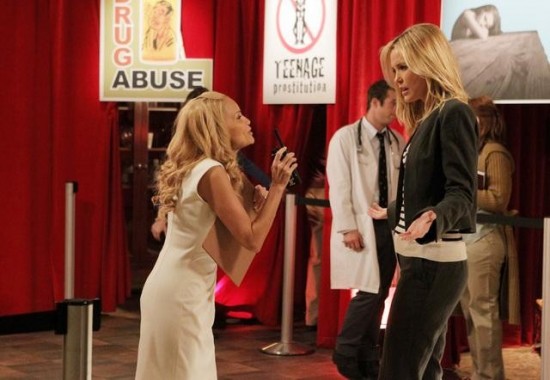 The Texan accent that is adopted by the actors works well, with Leslie Bibb’s transition from the Texan and California accent being quite good. It never gets overbearing or annoying, just gives it that little bit of Southern flavour, and all the actors pull it off in quite natural ways.

There are a bunch of featurettes included in the DVD set about how they brought Texas to the show, which provide a good insight into the show as well as the cast (Miriam Shor is a particularly entertaining interview), as well as bloopers, commentaries and deleted scenes. It’s a well-rounded and interesting effort that’s enjoyable to watch once you’ve finished the series.

It also gives you that little bit extra of the show after you’ve finished the series, although the way that it’s spoken about is a bit depressing, because it is talked about like there will be more to it. 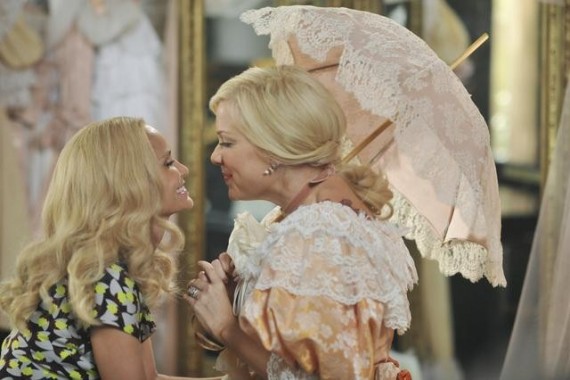 GCB is a really fun and entertaining show, unfortunately there are only ten episodes for the show, but it’s definitely something that you should watch. It makes you a bit depressed that you won’t be able to see any more of the show or characters.

While avoiding the show will save you the heartache of having a show you fall in love with not be renewed. However, you will miss out on a brilliant show with a stellar cast, great writing and a really lovely group of characters. Unfortunately a few storylines are left up in the air due to the cancellation of the show, but it’s still a good run while it lasts, and I can’t recommend it enough.