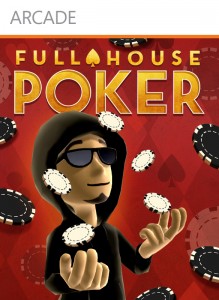 Poker. The very name conjures up images of famous movie stars, outlaws, and back alley cheats.  A past time of school boys, gentleman, and executives, it is probably one of the most well known card games.  XBLA is a great choice to bring this classic to the virtual world.  Is it as fun as real life? 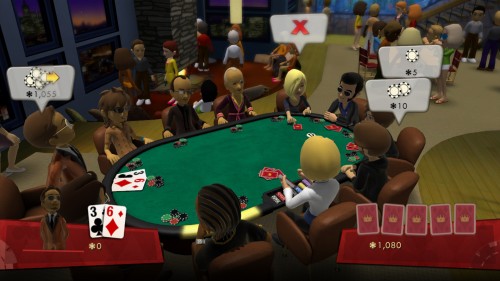 I’m sad to say that I am one of the few people who doesn’t really know that much about poker.  Whatever the reason is, I have never been exposed to it, and hence, I don’t know much about the game.  I get the basic principle of betting on unknown cards, but I don’t know much else. Like, what sets of cards to get, or what the different variations of the game are. My main excitement for the game stemmed from the fact that I hoped that I might be able to pick up the game and learn a few things that might help in my quest for knowledge of the poker.  Unfortunately for me, there was really no training to be offered in the game.  I was literally thrown into the mix, expected to know most of the niceties of the game.  Soon enough, there were a few tutorial videos that popped up.  They were very short and simple, and that was a good start. However, these mostly had to do with controls and the like; not much was said about strategy.

Eventually, I popped open a menu and found all the tutorials.  These were exhaustive and covered poker’s finer points.  Still, watching a video is no substitute for actual training.  Therefore, if you don’t know much about poker, you might be advised to find someone to teach you before you dive headfirst into a hasty purchase.  Otherwise, you will either be watching many videos or flying by the seat of your pants.

Nevertheless, even if you do happen to find yourself sitting at the table with no clue, the game’s difficulty curve was very well executed.  I found myself easily winning  a couple matches.  I never got frustrated or bored because I did not know the exact rules.  That’s not to say that the entire game is easy though.  There are plenty of options for hardcore players of the game.  For example, you can play with the pros, or you can compete in tournaments of varying difficulty.  This game is made for everyone to play, and I was able to enjoy myself completely for a few hours while playing the more stupid AI. 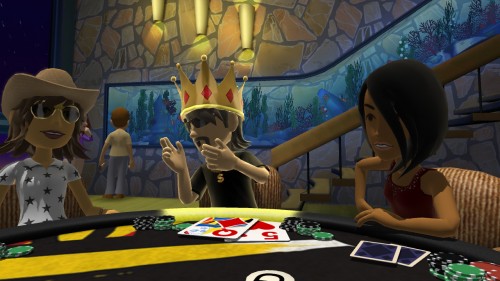 Of course, there is also an online mode available.  I was unable to compete in any online tourneys though, because no one was playing at that time.  However, perhaps once the game picks up some steam, this will be a very fun option for friends looking for online video game action that does not involve guns.   One feature of the game that is notable is its interconnectivity between your Xbox and Windows Phone 7 devices.  This is the first game to fully support the cloud syncing features of both platforms.  You will be able to transfer your XP and bank roll when you play the game on either platform.  It is too bad though that the achievements will be different, and you will be unable to to participate in cross platform multi-player.  It is a first step towards very cool, futuristic stuff though.

One of the best parts of the game was the customization options.  While playing through rounds of poker, you win money, but also unlock a plethora of awesome bonuses.  For example, you can change the cloth on the table to be different colors, or different prints.  You can also change the chairs you sit in. Virtually everything where your sitting can be customized to your liking. 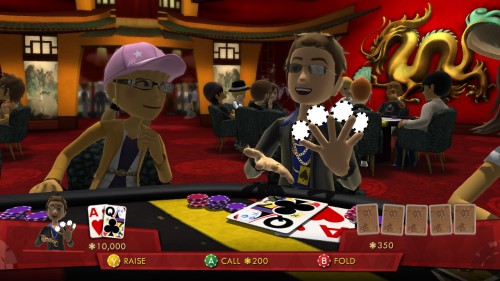 Gameplay is pretty much exactly what you would expect. Place your bets, wait for the others and hope for good cards.  Luckily, the AI is very fast, so you won’t be sitting around for that long.  The game moves extremely fast, and you will never be tapping “A” to try to get the other players to move along so you can get to your turn.  As a matter of fact, you can even tell your player what to do while the others are going around taking their turns and when it comes to you, he will perform your action and the game keeps moving.  The game recreates every part of playing poker.  You can zoom on other player’s facial expressions, or you can act out your own feelings, like being very excited and dancing around.  If your still not kept at attention though, the developers implemented a small mini game.  You can unlock poker tricks and hit the appropriate buttons to get have your Avatar show off his moves.  For example, you can hit UP 3 times on the D-Pad to have your man roll a chip around on his hand. 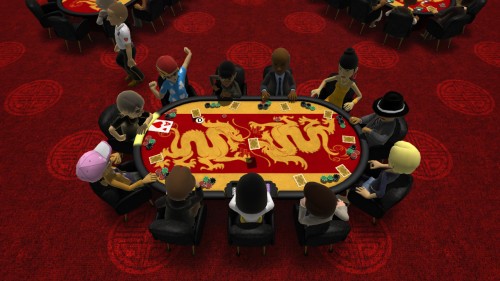 This is poker.  Nothing more; nothing less.  If you enjoy poker and want to play with others constantly, this is your game.  You can unlock XP and receive awards (which is very addicting by the way) and you can get those all important Achievement points.  You can listen to the repetitive music and enjoy the simple graphics while your Avatar sits there looking a bad ass pro poker player.  But, it still probably won’t be as enjoyable as drinking with your buddies while playing a causal game of cards.  Nonetheless, Full House Poker is a quality game that runs smooth and can satisfy your gambling cravings for quite awhile.