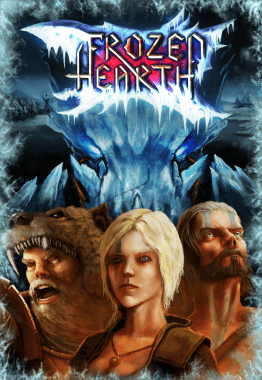 Overview
Real time strategy games can stand out by addressing specific interests like space, fantasy, and especially believable military. Frozen Hearth falls into the fantasy realm where magics and mystical evils are considered normal. With three years in the making, how will this indie RTS measure up against the leading competitors in its genre?

Story
The world of Ámorrá has seen many of battles between warring tribes, but a new threat lingers near slowly plaguing the Danaan from every corner of the world. Draining the life essence from its foes and leaving only a cold frozen landscape behind is the beings known as The Shangur. No doubt this is the reason behind the coming of the Avatars who are considered legends in Danaan history. These special Danaans possess mystical strength that make them natural leaders and skills that rival gods’. In these dark times, warring tribes led by Avatars finally come together to save whats left of their people and race towards the Danaan capitol. Days become numbered as the ice creeps steadily across Ámorrá, and only the combined strength of the world’s Avatars can be enough to defeat this supernatural foe. 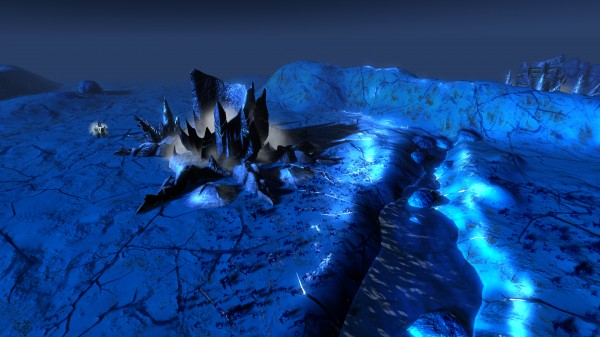 The Shangur pose a terrifying threat to the people of Ámorrá – killing innocents and covering the land with a thick layer of ice. Posing this major threat in the face of players makes them automatically involved in the story and grinds their gears to progress forward through unfolding events.

Gameplay
With the story incorporated into the campaign, you would expect that since there are three separate Danaan tribes you would play through three different storylines. Nope, I am afraid you will be disappointed to find out that only the Avatar appearance and abilities change. While the lack of an expansive storyline yields distaste, the differences in Avatars is worth investigating. In fact, choosing your Avatar is an enjoyable experience by not only selecting a tribe but by also defining your expertise. The available tribes are as follows: Anija (defense and boost), Kryetar (storm based magic), Sherim (innate healers). After choosing your Danaan tribe you can select your battle tactics such as the following types: Guardian (defense abilities), Maelstrom (focused damage and attack rate), and Preserver (bonus healing). So choosing the Anija clan along with Guardian expertise will result with a highly defensible character. 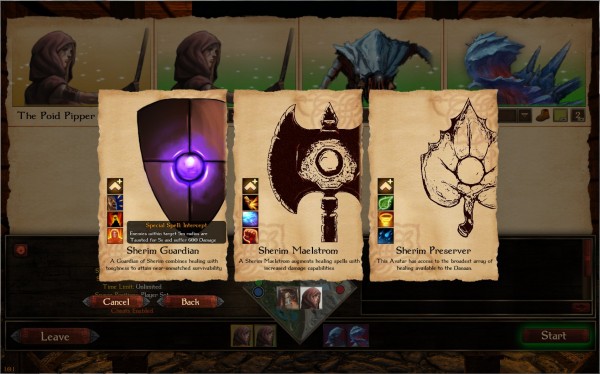 Most of the RTS titles that I have come to enjoy enable a special unit to create structures to aid in a player’s progression. However, this is not the case in Frozen Hearth as there is a single barracks placed for all units to spawn from. And around the barracks are six potential add-ons that can be accessed for new buildings which contain upgrades and abilities for specific combat units. Being there are more than six possible buildings, players will have to define their tactics wisely to upgrade corresponding units and structures. While the barracks provide an easy access tool by clustering all buildings together, enemy forces will have a more direct target rather than attacking multiple bases.

This leads us into the important aspect of finding available resources for training new warriors and purchasing upgrades/equipment. Resource nodes can be located across a map with discernible stone markings similar to a shrine. By capturing these nodes, your barracks will receive extra funds in replenishing resources. The negative aspect about this is the interaction is lost as far as doing the dirty work to get resources. For instance, StarCraft requires the harvesting unit to collect the resource and then transfer the material back to the back. Frozen Hearth only requires units to capture the resource node, and that’s pretty much it. If there were absolutely zero trees on a given landscape, you could still collect infinite wood from the resource node. Perhaps the intention is to focus on the building of armies rather than the art of mining for gold (Warcraft) or skill to mine ore from fields (Command and Conquer). Needless to say, Frozen Hearth definitely distances itself from other titles by removing these harvesters and builders. 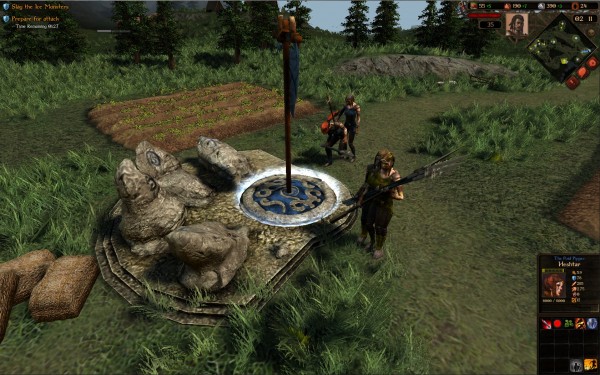 Have you ever felt the need to save mid-game because you needed to go somewhere or knew a major battle was coming? Consider those days over because there is no chance you will be able to save at any point of the campaign. Playing on normal difficulty will damage your pride a bit as some missions can become overwhelming. In a specific mission where you trying to enlist the help of a powerful Menhyrim – magic wielder, you are given your Avatar as well as another experienced warrior with a Heal spell. Continual assaults will wear down both characters, and timing the Heal spell will be the matter of life and death. After completing the first task of the mission, the Shangur decided to be relentless and became the death of me. This happened at least five times when I was ten minutes into the mission. Regardless, a save game state would have been lovely after the first two unsuccessful tries.

Since there is not a save game option, what about allowing players to change the difficulty of the campaign to reduce the hardship of grudging through missions? Even here the developers did not allow an option for this change. Even though it may be a small addition, these aspects show consideration to the player and make the title more enjoyable.

Audio/Visuals
During the campaign, you will encounter cut-scenes that will have your character speaking with advisers and troubled persons in Ámorrá. As a personal preference I would have added voice acting for these scenes instead of providing text driven conversations. I felt as though I lost a connection from the story shifting from speaking to non-speaking scenes.

Tuning up the visuals to high quality will reduce rendering speeds greatly. There must be plenty going on in the background to make my computer lag as I pan across the environment, and I hardly have issues running Skyrim and other graphic dependent games. I am positive that there is an optimization issue that can be addressed, but very low graphics proved less of hassle. The difference between graphic settings is noticeable, yet the very low setting is amicable without taking too much away from the original graphic’s integrity. 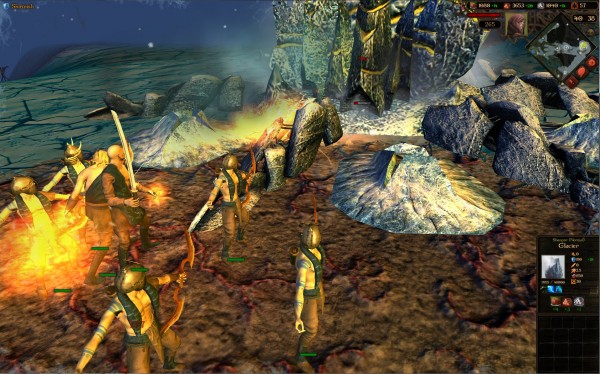 Using the middle mouse button allows a player to zoom in and out of the battlefield. This neat function can provide a close up view of the damage being dealt and special effects of magical abilities. Shifting between angles can make a battle more interesting especially with fireballs wisping by allied heads!

Overall
Epiphany Games has engulfed its energies into this title for three years. That amount of dedication provided the indie developer to do something that many cannot say they accomplished – created a game. The next step for this indie developer is to refine and learn from the community how to invent more creative aspects as well as copy the knowingly fun attributes other successful games possess. Sometimes a project needs an outside body to look at the product to provide unbiased constructive discussions. After three years of working on a game, creativity turns into deadlines with deadlines cutting out the most important attribute of a working game. Even unintentionally, fun can be lost by missing the small cues that not only aid the player in the game but also allow the player to have peace of mind.

Frozen Hearth is a title that yearns to be great. It already has most of the working mechanics to make it worthwhile, so some missing aspects like changing difficulty can be overlooked. I will admit that I am intrigued by the story and the development of the Avatar, but the current graphic rendering and lack of game saving steals Frozen Hearth’s glory. I have no doubt that if some of these considerations were focused on in an upcoming patch that we would clearly see a new RTS title.