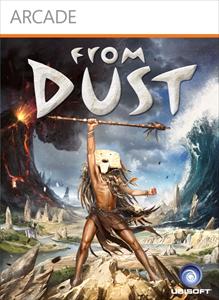 Overview:
What would you do if you had the powers of a God? Of course you could do anything that you wanted; you could even be a malevolent God who could destroy everything that you wished to. Or you could be a helpful, assisting God who tries to make sure that their followers come to no harm. Now Ubisoft has brought us a game they are calling From Dust; something they are also calling a spiritual successor to a previously popular title Populous which was released back in 1989. Now does From Dust’s rise from the ashes of a series long in the past or does it settle into the dirt to be forgotten.

Story:
In another world, one bereft of any other forms of life, a tribe of men and women have gathered in a harsh unforgiving environment. The tribe has only one way they can manage to survive in this land, and that is with the help of what they call the Breath. They commune with the Breath through music, and soon after reviving it they know that they can now commune with the planet itself and can begin their journey.

There is just one problem for this tribe of people. Although they may have managed to find themselves a way to continue their journey and keep themselves safe, they know nothing of their past. The tribesmen and women have forgotten everything about their heritage. Only along their journey can they hope to recover their lost memory and find themselves homes of their own. In a world full of danger, where Mother Nature still holds rule over the planet, can this tribe survive and find what they have lost? 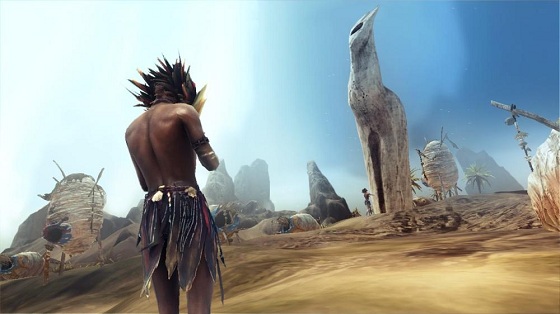 From Dust is unfortunately a title where the story begins to take a back seat to the actual gameplay. Beyond the initial story introduction and walkthrough through the first through areas of the game most of the storyline doesn’t take place during the actual game itself and can be easily forgotten.

The heritage and “Memories of the Tribe” you can unlock through doing various side missions or discovering hidden memory stones in the game are actually separate from the main story and can be viewed in the pause menu or at the main menu of the game. The problem with these is that they are simply text descriptions of various memories, creatures in the game or parts of the world.

These are then categorized further by their type so the player can easily locate them; however they are rather plain to read and could have used at least a little more flare to encourage the player to pay attention to what is happening behind the scenes as well as the world itself.

Graphics:
From Dust may contain some of the best looking environments you may find today on the PlayStation Network or Xbox Live Arcade. The land is truly yours to wield and it is all beautiful to the eye. The fact that the world is primal in nature and has yet to be corrupted can sometimes look like just a barren piece of land that is begging for the player’s touch, and other times it looks so pristine, with glistening waterfalls and beautiful landscape that it is almost a shame touch it. 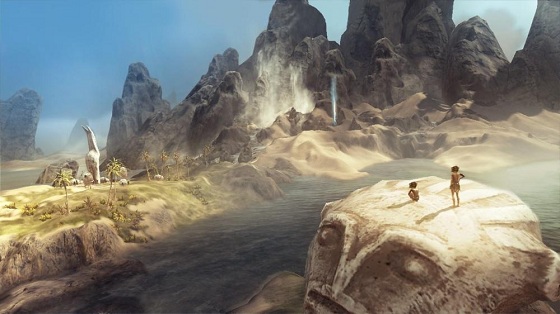 If there is any complaint I can find with the graphical presentation of From Dust is that the tribe themselves are rather plain to see, with little actual character design beyond their signature masks (which is rewarded as an avatar award) and the clothes that they wear depending on being either a male or female. The characters are usually not seen close up however unless the player chooses to zoom in on one specific character, so this is only a minor complaint. These tribespeople don’t always ruin the amazing landscape either, as the villages they build up around totem poles also begin to look quite impressive after enough time has passed.

Another highlight from From Dust is the fact that the physics engine is quite amazing for the title. There are countless moments in the game where you will have to divert a river, raise the earth to create a bridge, divert lava flows and create new land from destruction. All of this is handled swimmingly by the physics engine. Watching a volcano explode can be both a sight of amazement and horror as you realize that great view just put the entire tribe in danger of death.

Audio:
One of the first things that players will notice is that the tribesmen aren’t exactly English speakers. This is to the credit of the game itself as a tribe with no lineage of its own would not be speaking English. This means that any dialogue spoken in the game is going to be in a separate language; one that I cannot guess is used in the real world or was created just for the game. This may be something that could turn off users who don’t want to read subtitles, but is still a minimal part of the title.

Besides the dialogue, the rest of the game’s music is impressive and certainly sounds like something one would hear from tribes who possess no actual technology of their own but still create music. Authentic music for the tribe certainly matches the atmosphere and lends credence to the fact that this truly is a tribe. The first thing the player is introduced to in the game is the fact that music is very important to the tribespeople as their first act is to use it to communicate with the planet and control the Breath.

Gameplay:
From Dust places players in control of a god like being known as the Breath. The premise of every level in the storyline is simple enough. Reach each totem and build a village and then finally manage to escort enough tribesmen and tribeswomen to the passage to advance to the next level. This is usually broken up with some sort of danger to the tribe however and there is much more here than a simple escort mission. 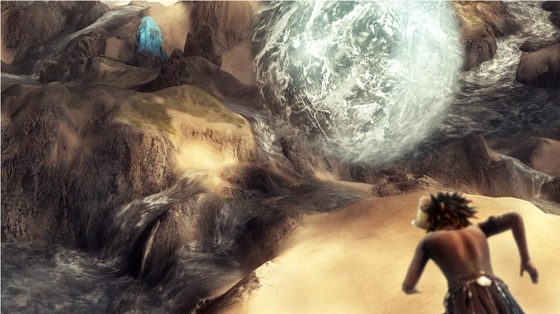 Controlling the Breath players can pick up and move large spheres of the world around with them and place them in other places of the map. For example a player can build a bridge across water by gathering a large amount of soil from a separate part of the map and filling in the ocean with the water instead. Or they could suck water out of a lake and use it to put out a raging wildfire and save a village from destruction.

At its most basic level the gameplay is quite enjoyable and From Dust helps spice up things by throwing curveballs at the player occasionally by introducing catastrophic events to the game. These can come in the form of gigantic tsunamis that could potentially wipe out your entire village or volcanic eruptions threatening to kill everyone. These disasters not only provide a danger to your tribe which you must avert using any number of methods provided, but they also change the face of the map you are playing on as well. Entire landmasses can be washed clean of soil and force you to begin your journey to the passage anew.

The player has a few more abilities up their sleeve than simply moving around mounds of dirt and lava however. They are also given special powers that can be used to help their villagers in their times of need. Some of these powers include Evaporate, Infinite Earth and Jellify Water. These powers are very useful and at times can be necessary to escort your tribe to safety.

If it seems that things in the world of From Dust are easy then you must think again. The game does have a mild difficulty level where failure will force the player to begin the level over again. If too many of your villagers die (which they do… in many different ways) you can fail a level, or if you fail to present a disaster you can also fail, though this is usually because it ended up killing all of your villagers. 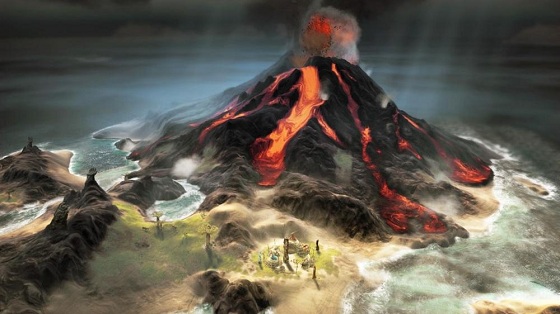 Besides Story mode there is also a separate Challenge Mode which provides extra levels for the player to enjoy. These challenges usually have one focus that makes them unique from the rest and once they are completed the player is shown how long they took to complete the level, and then they can try again to complete the level even faster. These challenges are not unlocked right away but will be available shortly after beginning the Story and more challenges are unlocked as the player advances further in the story.

Now, despite everything I have mentioned so far, From Dust is a game that will most likely have a unique audience. The reason for this is that there is nothing to the game beyond moving balls of earth, lava, water around and making sure that you don’t end up killing all of your villagers. Despite the different challenges thrown at you in a level, that is ultimately the process of it all. This can lead to players growing bored quickly simply due to the same process repeating itself over and over again.

Overall:
From Dust is a title that takes a few risks and they pay off big time in its advantage. The physics engine and the visuals are very impressive which help extend to make the rest of the game all the better. There are a few drawbacks however, thanks to the weak storyline and the fact that, although the player can spend as much time as they please on levels, there is no actual sandbox mode. Nor is there an option to be evil to your tribe. The ability is there, such as dropping lava on your village, but it is a good way to end up getting a Game Over screen than being evil. From Dust is a title that looks amazing visually but is most certainly not for everyone, as many gamers may find it a quickly boring experience.

I give From Dust: