It’s been a full year since Final Freeway, by japanese game developer Oyatsukai, was released for iOS and Android devices, and brought to the rest of the world through their parent company, Newtype K.K. Touted as a retro Outrun clone, it quickly gained praise from fans of the old classic racer, and left them wanting more.

And so, Oyatsukai have released FF2R, a sequel pushing the franchise that little bit further. 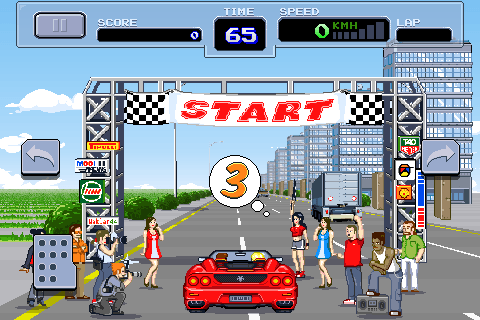 With an accelerator and brake pedal on-screen for you to tap and hold as you like, there are a number of options for steering your vehicle, as well as the layout of the on-screen controls. You can use tilt, drag a steering wheel, or use left and right buttons to steer, all of which work really nicely.

While for me, most tilt-based racing games are slow and unresponsive, this game felt tight and always reacted exactly how I intended. This may be down to the face that you’re effectively strafing left and right along the road, and turning hard for corners, but in any case, it was a great experience no matter which control scheme I used.

The game features plenty of useful options, including an accelerator lock, allowing you to relax and focus on the steering. 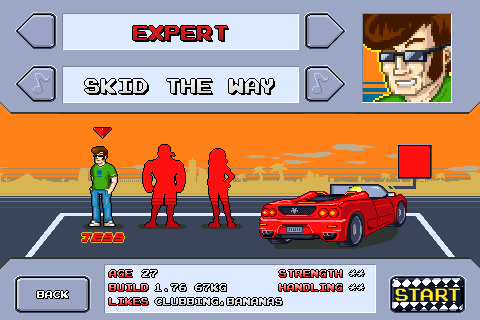 Each time you start playing, you can shoose between 3 characters, each with their own Strength and Handling stats, as well as the colour of your car. You can also select the song playing (more on that in the Audio & Visual section), and the difficulty (Beginner, Normal, and Hard).

There is not a selection of races per se, but you aren’t stuck with one track, either. You always play from the same starting point, heading down the same road. At up to 4 forks in the road, however, you’ll be able to choose between two routes to take, giving you a choice of 14 individual and unique stages, and 3 possible destinations.

This is a really clever feature; it keeps it’s arcadey simplicity, letting you just “pick up and play”, it gives you a rich and varied experience every time they play. There is also varying amounts of traffic, and the road can be particularly windy and hilly, adding all the more to the feel of each individual area. 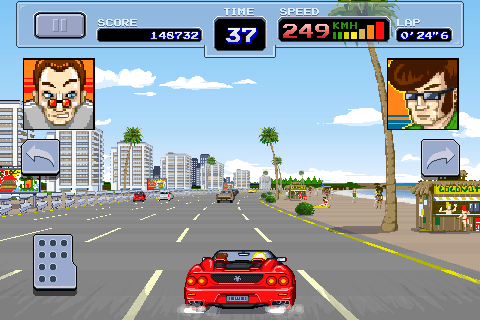 In each stage, there is a rival racer that appears, trying to beat you to the next checkpoint, adding a little element of competition to the already tricky task of making it to the next checkpoint in time. When you rival is near, his and your characters’ portaits appear on-screen, giving each other the evil eye and looking ever more determined, and even reacting to the events happening in your race.

The HUD is nice and chunky, keeping with the retro vibe, featuring Score, Time (which is extended when you pass a checkpoint after a fork in the road), Speed (in KMH or MPH), and Lap time.

The music in this game (selectable in the Character Selection screen) features 3 well-made tracks in the synth-dominated retro style of the classic games of yore. They really keeping things pumping, and are great to listen to as you play. You can, however, select “None”, or even choose your own iPod track to use.

The sound effects are spot on, and feel just right for the classic style of the game. 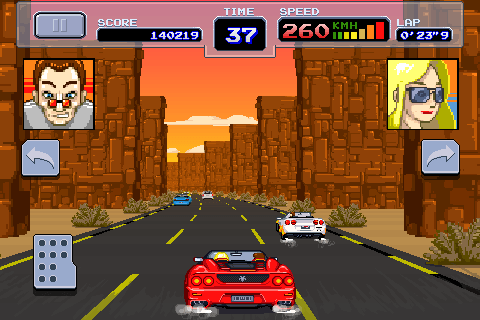 The graphics are wonderfully old-school. Everything you see is made up of nice and chunky pixel-art-style sprites, and nothing apart from the road itself is truly 3D. Everything pops with vibrant colours and retro goodness, making anyone into the style drool.

There are even atmospheric and weather effects on certain areas, which, while being totally spot on and somewhat realistic, also have a classic feel to them, doing well to not break the illusion you are playing a game made “back in the day”. 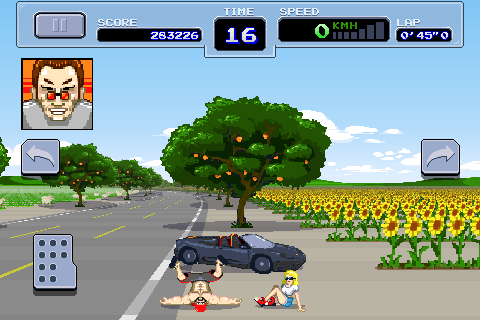 Everything is done so perfectly – so faithfully to the style! What would an old-school be like if it was made today? Final Freeway 2R, that’s what!