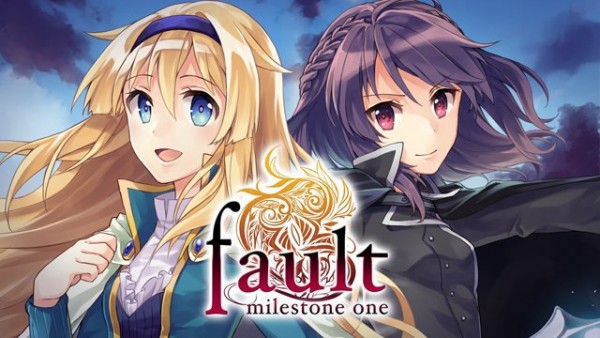 Overview
In the past year Sekai Project has earned themselves quite a reputation as being a company willing to not only bring English speaking fans some of the highest demanded visual novels through Kickstarter but also help release a number of smaller visual novels that may have otherwise been overlooked. One of these visual novels happens to be fault by ‘ALICE IN DISSONANCE.’ So now that milestone one (episode one) of fault has been released, is this visual novel worth beginning?

Story
The Kingdom of Rughzenhaide has come under attack by an unknown force. As the people are slaughtered by unknown Shadow Warriors, a couple members of the commanding force reach the location where Rughzenhaide’s princess, Selphine, is supposed to be hidden away. Unfortunately for them, the Princess’ royal guard Ritona is an incredibly skilled fighter capable of wielding powerful manakravte (magic) and when it becomes apparent that they are at a disadvantage, Ritona uses a risky technique to teleport both Princess Selphine and herself away. 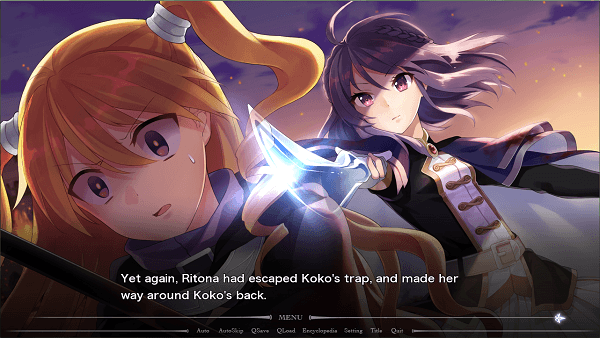 With no knowledge of who laid waste to the kingdom, Ritona and Selphine find themselves in an unknown land as something went wrong with Ritona’s teleportation. The only thing they do know is that this strange land’s manastreams are not only small, they are also extremely difficult to access. With difficult access to their battlekravte (combat magic) and in an unknown place, the two will need to find their way home, but first they must find out where they are and how they can manage to survive in a land where the people have turned to science to make up for the lack of their mana.

Now although the basis of the story is obviously set around Ritona and Selphine, the focus quickly begins to shift away from their plight. You see, while the visual novel follows the pair as they explore a close city, quickly learn the language, find out where they are, as well as obtain some local currency, the core plot focuses on a strange new girl calling herself Rune. Rune offers the pair help navigating the city and although she may not have any underhanded motives, there is much more to Rune than she lets on and players will quickly recognize this as the story unfolds over what becomes an interesting and enjoyable read that is hurt by a drawn out narrative that takes forever to explain simplistic terms and events and a lack of focus. 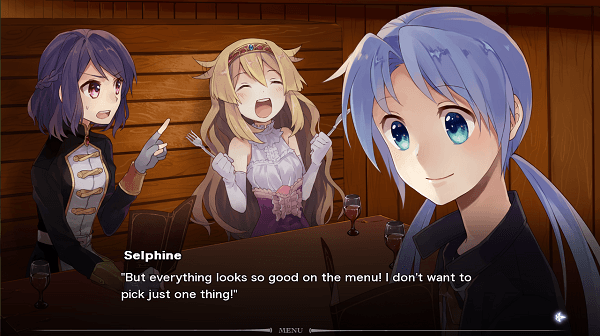 Considering this is the first “milestone” in the series, it is good that the writers chose to spend a decent amount of time building the world and explaining certain aspects of how manakravting works and the various illnesses and threats that Ritona and Selphine will need to watch out for. That being said the title already offers an encyclopedia of basic terms and almost everything that is introduced is explained to an unnecessary level. This problem is worsened by the fact that the writers have an issue keeping a set perspective.

The story isn’t told through the eyes of any specific character and shifts from third person to first person rather often as we read what a character is thinking. Unfortunately more often than not, the narrative jumps so quickly between these forms and doesn’t properly label who is even supposed to be talking. While this is easy to figure out, the writing lacks focus. In fact this lack of focus is all the more apparent when it comes to the main storyline of Ritona and Selphine. 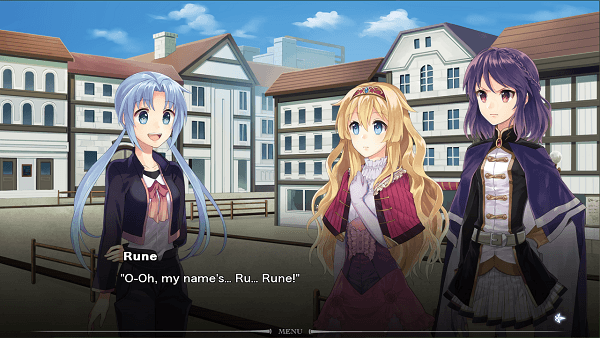 Although the beginning of fault -milestone one- is handled well enough, the main focus of the story is instead on Rune, the mysterious girl who first assists the pair. In fact, outside of the very beginning and the very end of milestone one, Ritona and Selphine’s story and what is happening to their kingdom takes a complete backseat to Rune’s backstory and who she is.

To make matters worse, although the world is developed and explained nicely, the characters themselves are as standard as they come and very stereotypical. Neither of the two main characters are given any meaningful development nor are we given a reason to care about them other than the fact that their kingdom is destroyed and they are stranded somewhere. Rune’s story makes us care about her and I will say that the writers have done a great job handling her past, even if it feels like the whole issue is resolved in a rather simple manner in order to wrap up the milestone with a cliffhanger that tries to swing the main story back into focus.

Gameplay
Now although fault -milestone one- is a visual novel, it is a kinetic visual novel which means that there are no real player choices or different routes to be taken. There is a very specific story to be told here so far and although there is one choice, the only thing that changes is a little bit of dialogue and nothing else. Instead players will simply click through the story as one would any other visual novel, though you can make use of simple features such as auto advance or skip if you’ve already read the dialogue before. 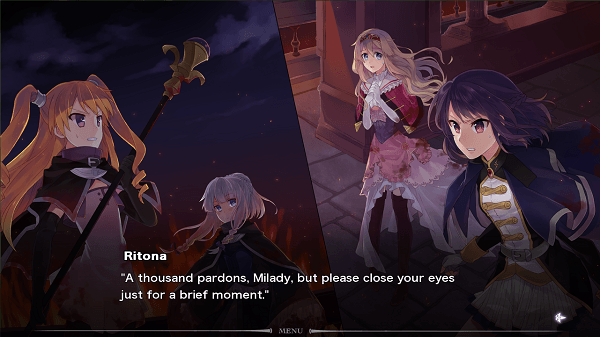 One thing that is lacking however is a way to hide the text box, which isn’t too much of an issue as all of the CG in the game can later be viewed in a gallery but it is something that is strangely omitted. It is worth noting that if you so wish; you can change the text from English to Japanese.

Visuals & Audio
For the most part, fault -milestone one- features some nice looking character portraits with most of the main characters featuring multiple portraits for different emotions. That being said, there are a number of character portraits for side characters, albeit ones that show up often, that have oddly proportioned heads and other strange looking features. The CGs are nicely designed and so are the backgrounds, though it must also be said that since the players only visit a few areas in milestone one, you will be spending a lot of time looking at the same backgrounds. 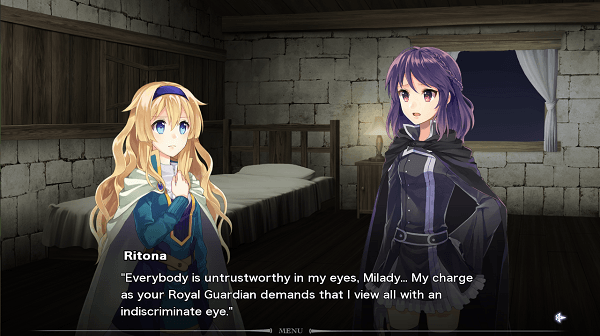 It is worth noting that fault -milestone one- does not feature any sort of voice work, which generally isn’t an issue but in the case of this visual novel it does make most of the drawn out dialogue boring to read through. As far as the background music is concerned, there are a number of different tracks that are nicely varied and fitting when they appear. The title also features a nice and fitting opening theme called “Modus Operandi” by Midorizaka Aaya.

Overall
fault -milestone one- is off to a fairly decent start here as the writers have managed to build up a rather fascinating world, now they just need to try and make readers care about what will happen next to Ritona and Selphine because at this point, the only reason we would have to care about them is because they are interacting with Rune. With character designs ranging from decent looking to odd and a nice soundtrack, there is some potential in fault but whether or not they will be able to take advantage of everything they spent so much time building up and focusing on is yet to be seen.