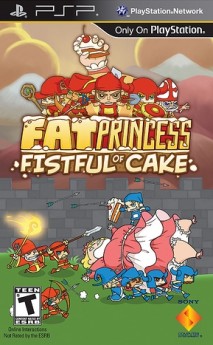 Overview
Fat Princess: Fistful of Cake is finally out on the PSP and this was made possible by the hard work put in by the people at SuperVillain Studios. It also looks much the same as the PS3 version which is a good thing. But do read on as there are some major limitations which exist in the PSP version that simply makes it “no where near as good” as the PS3 version. 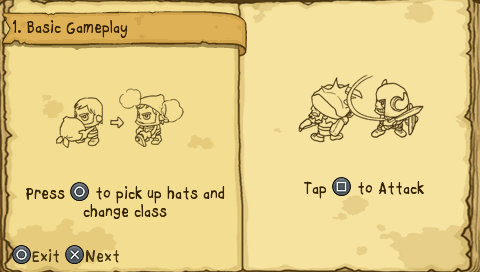 – This page tell you everything about the game. Well, sorta.
There are 4 main changes made to the PSP version:
The basic outline of the story is simple enough. Two princesses were out in the woods, finds a HUGE cake, they eat and eat until they become the size of sumo players then gets kidnapped by the bad people and now you have to save them. Story aside, the main gameplay is no different to the capture the flag between the red and the blue team. Except that the flag is now a fat princess that the opposition team can throw pieces of cake at to make her fatter. This in turn making it more difficult for your players to transport her to the other side. It’s a non-stop killing action mayhem and that’s what this game is all about. Cute but deadly. 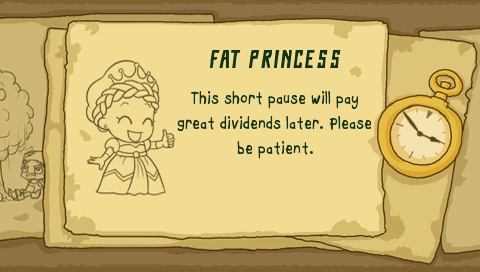 – Loading times can be a bit annoying.
Graphics
Simply put, it looks great on the PSP. Faithful to the original, it’s colorful and still has all of that cute factor while running with no slowdowns. It obviously doesn’t look as sharp as the 1080p resolution of the PS3 version but it’s still good enough to not notice too much difference other than the size of the screen that you are playing on. Menu interface is also the same as the original and is a very easy to use interface. So I have no complaints about the graphics whatsoever. 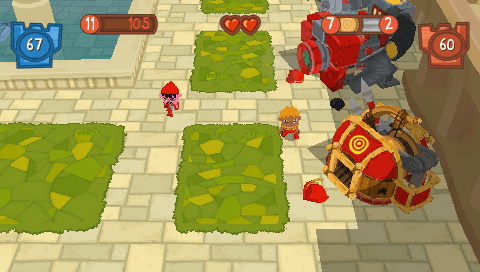 – That’s me on the right standing next to the hat machines.
Audio/Sound
The audio part of the original is untouched from what I can hear and that’s a good thing as the sound effects and the musical score of Fat Princess really suits the game well and is not in anyway distracting or annoying. Every chapter of the single player campaign also has fully spoken story readings and little gestures and sounds that the characters make while playing definitely makes the game more lively and vibrant. 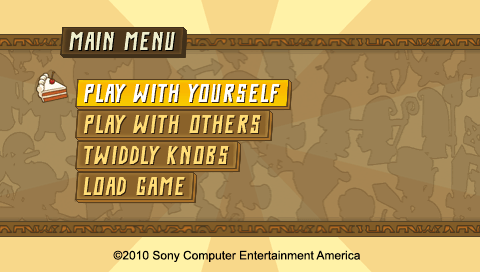 – You will be playing with yourself mostly…
Gameplay
Gameplay is what Fat Princess is all about. Class-based team play where you can be any one of 5 classes such as a Mage, Ranger, Priest, Warrior and Worker. Each class plays a key role so you need to be good at all of them to help out the team when needed. I personally like playing the Ranger as I can shoot from far away with auto-lock on the enemy using the L trigger. But sometimes, I do also help out my peers by becoming a Priest and be a healing medic. All in all, the essense of the game has moved across very well from the PS3 to the PSP. It looks, plays and feels very much the same as its bigger brother.
But on the PSP version, it is missing a very important ingredient that made the PS3 version so fun! PS3 supports 32 players online in a single map. with voice chat. PSP version however only supports 8 online players and has no voice chat support. Yes, only 4 humans per side. However, you do also get 8 computer AI players. (4 per side) So all up, there are 16 characters running around and as the maps are slightly smaller than the PS3 version, it doesn’t detract too much of the gameplay away although it definitely isn’t as fun and crazy. 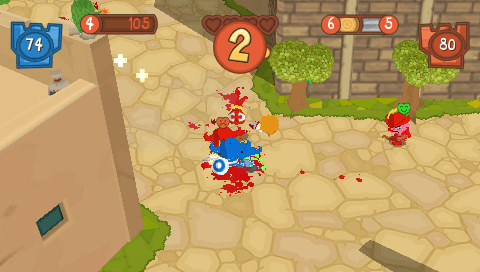 – That’s a lot of blood. My blood. Doh.
I don’t know about most of you reading this, but I typically play my PSP while I’m on a train / bus to work. This means I have no online access. (in Australia at least) So online play is only possible while I’m at home. But I have my PS3 at home… So, let’s talk about single player side of things as this is where most of my time was spent with the PSP version of Fat Princess. There are 3 main types of single player gaming. Story, Offline and Survival. Story is called ‘Legend of the Fat Princess’ and consists of 15 chapters (missions). It’s basically an extended tutorial and has no replay value but is still enjoyable the first time around. The Offline type called “Mess About” is simply the main game pitting you against 23 other computer AI bots. It’s as close as you’ll get to the PS3 experience and is sometimes more fun than playing online due to having an extra 8 players on the map. Finally, the Gladiator survival game is what you expect. You are alone in a gladiator oval dome and you need to survive as many waves of enemies as possible for as long as you can. It’s a great place to level up your fighting skills on each different classes. 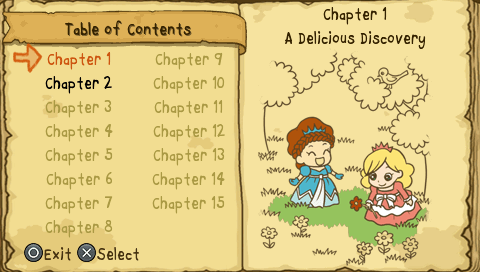 – This is before they got fat…
All in all, the single player experience is quite good. I don’t think they could have made it much better. However, the heart of the game lies in the online multiplayer experience and I have to say, it is not one of its highlights for the Fat Princess: Fistful of Cake on the PSP.
Pros
+ Vibrant detailed graphics
+ Smooth framerate throughout
+ Great soundtrack and effects
+ Fun, fast gameplay.
Cons
– Limited to 8 online players per game
– Not enough replay value for single player campaign
– Long load times
Conclusion
Fat Princess: Fistful of Cake on the PSP is great fun and especially more so if you have not played it on the PS3. But if you have the PS3, play it on the PS3 instead. It’s a great game but just wasn’t meant to be for the PSP platform it seems.