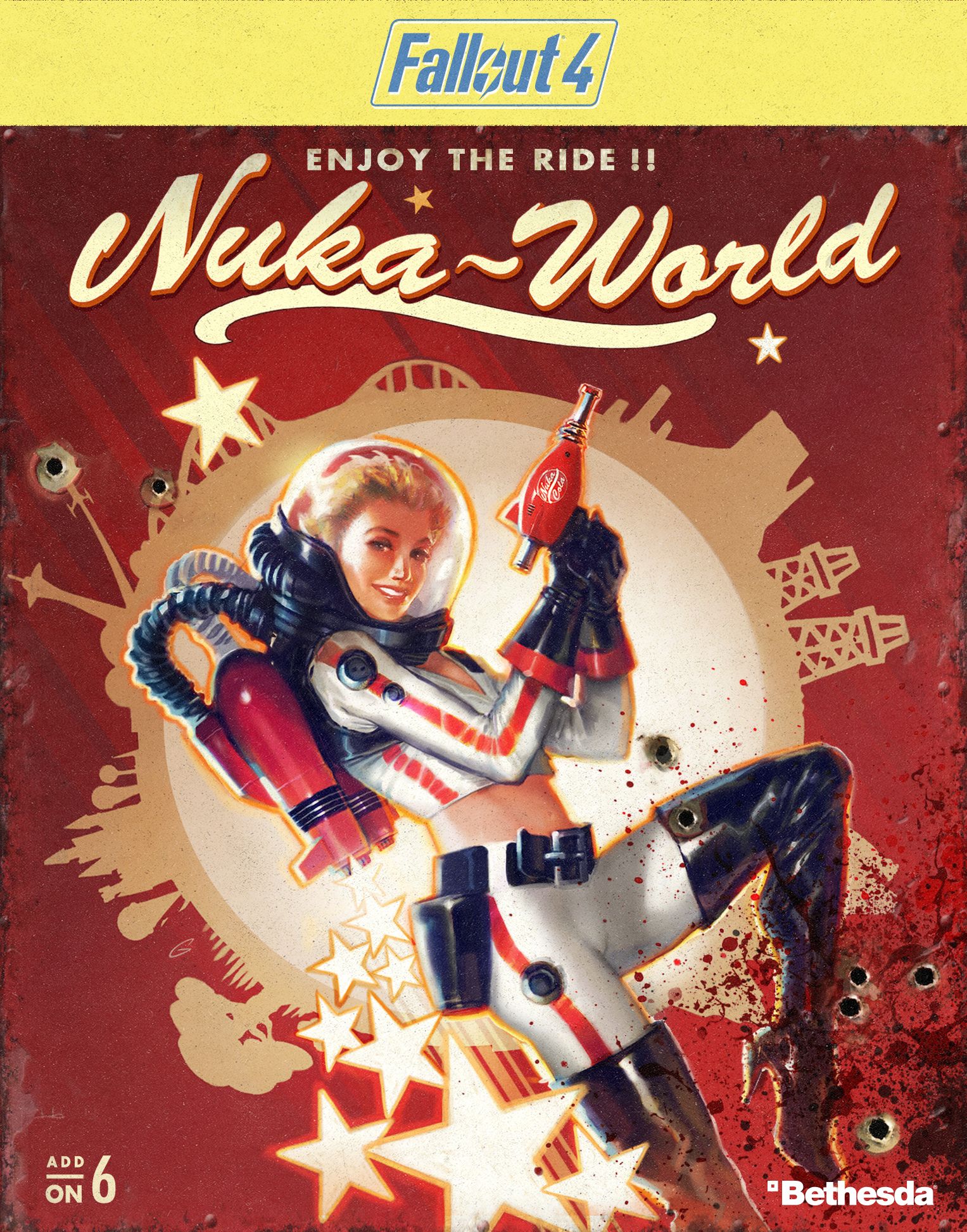 With Fallout 4’s DLC we’ve seen the arrival of new robotic forces, plenty of new objects that can be crafted and set up in various settlements, journeyed to the misty shores of Far Harbor, and have even been appointed the head of a vault. Now that the final piece of DLC, Fallout 4: Nuka-World, gives players a chance to be a bit more sinister than before and drops them into an amusement park of all things, is it worth picking up?

After receiving a radio transmission on the Pip-Boy, players will find that a new area has been discovered by the name of Nuka World and that the only way to get there is through a tram system. Upon arriving and clearing away the initial group of Gunners that were also investigating the signal, players will meet with a hardly trustworthy man who warns them that Nuka World is far from the happiest place on Earth and is instead home to three bandit gangs all ruled over by a leader named the Overboss. 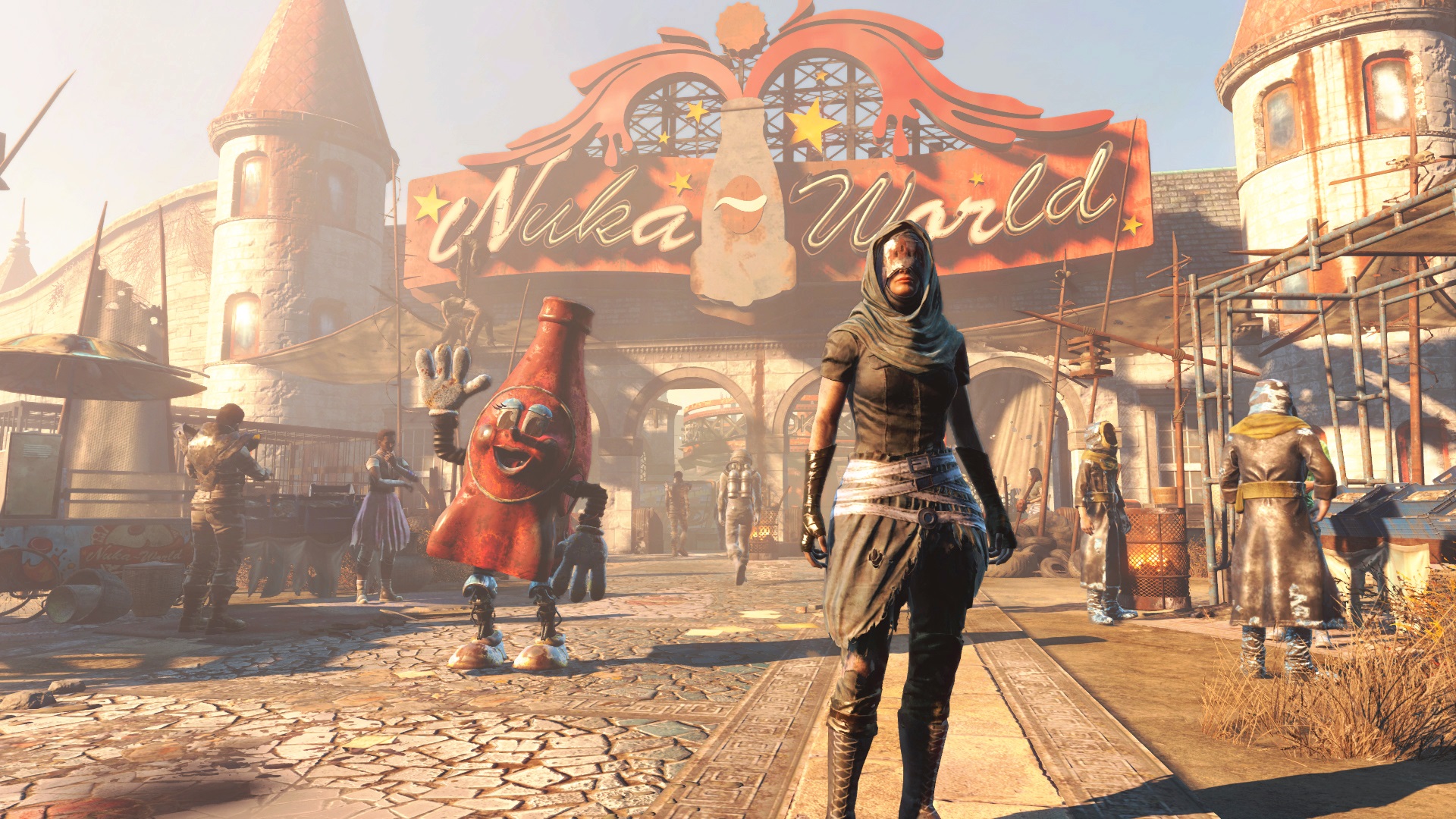 Despite these threats players head to Nuka World and are run through a gauntlet of challenges before coming up against and taking down the Overboss in a boss fight with a fairly unique gimmick that requires the use of a water gun to drop his shields before unloading with your standard weaponry. As one would expect with bandit gangs, eliminating the previous leader now crowns the player as the new Overboss and with the help of the new companion Gage they are well on their way to trying to take Nuka World to a whole new level.

Unfortunately this level is rather rudimentary in nature as players will find that they have very little control over things despite being the boss. Instead they will need to talk with and go on little side-quests for the three bandit gang leaders, clear out each zone in the park and claim it for these leaders, and eventually lead your gang back to the Commonwealth as a new force to be reckoned with. Even Gage, who comes across as a wise but potentially back-stabbing companion never really develops beyond his initial story arc which is a big disappointment considering the possibilities of his character. 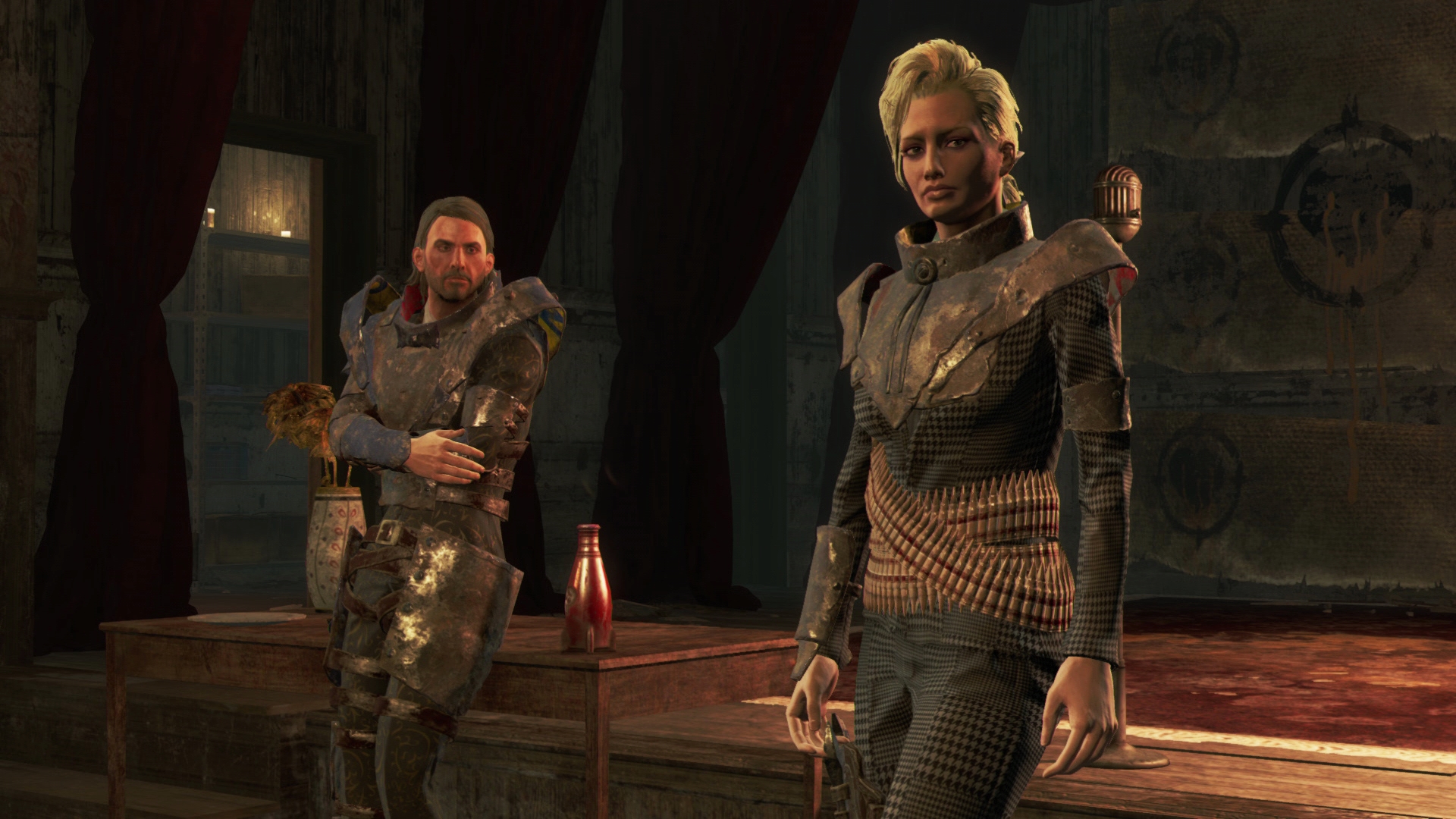 This bare minimum storytelling is helped a little bit by the various tid-bits of information players can find in the various terminals in Nuka World that describe just how bad things were at the park before the bombs fell and their reckless abandon for safety in the eyes of profit. There are a few decisions throughout the game that can determine just how bad you really want to be in Nuka World and although the real story involves going through with everything and being the Overboss, there is an option to simply slaughter every bandit in the park and liberate the traders that once used the park as a hub, but this really isn’t developed in any way other than a way for players to feel like they aren’t forced in only one direction, though considering only Preston really takes notice of the Lone Survivor’s actions in taking the gangs back to the Commonwealth, your choices here don’t really affect much.

There is one thing that a theme park can offer as a setting that very few other locations can, at least realistically, offer and that is compacting a large amount of new and strange areas in one spot. Players will find that Nuka-World offers a large amount of content to chew through with the park offering five different themed hubs that each have their own unique feel and generally unique enemies that players will spend up to two hours in each location as they attempt to clear the area of all threats and make the park habitable again. 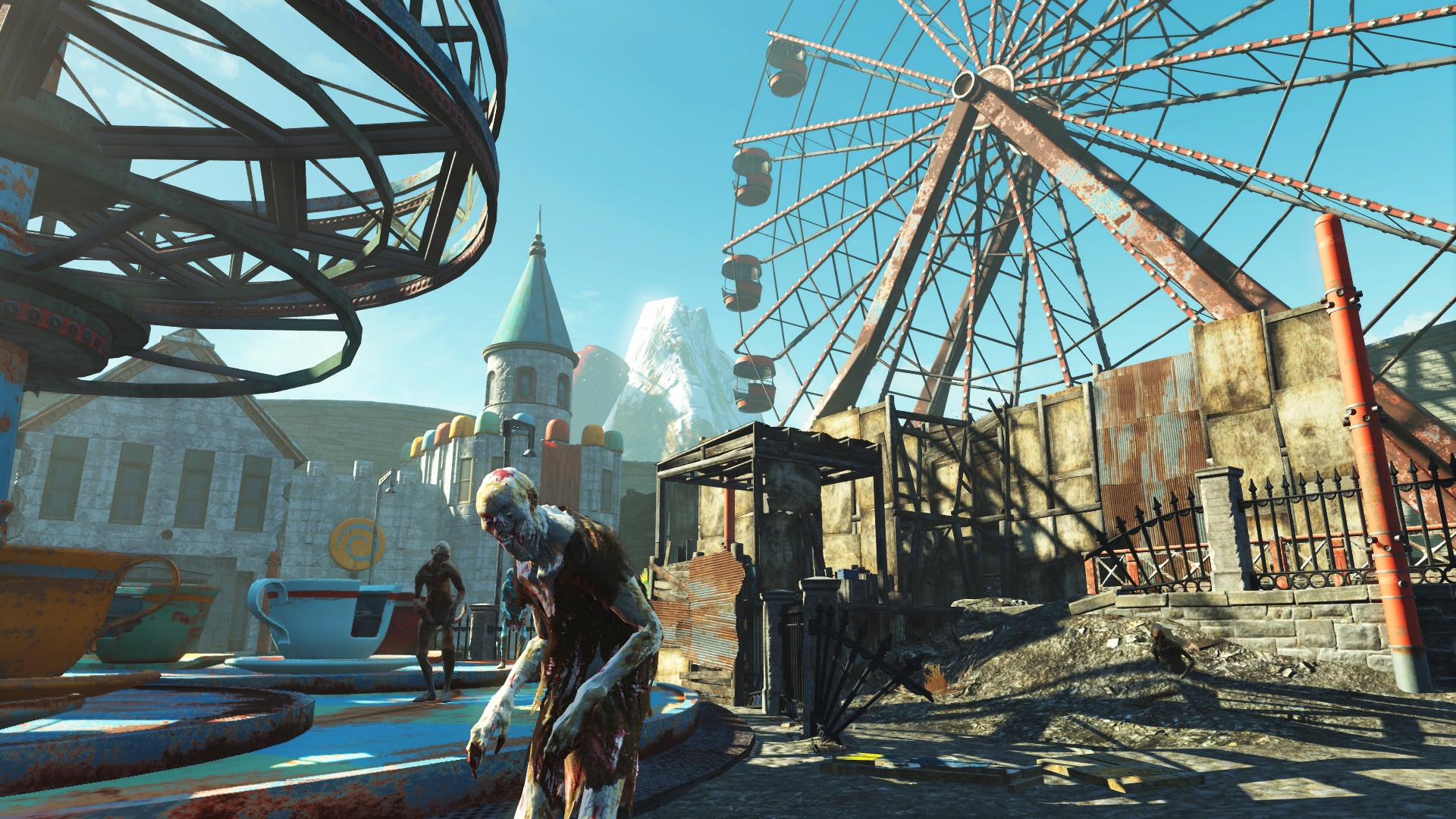 These areas include a Galactic Zone filled with special rides and robotic enemies all with Nuka Cola themed paint-jobs and attacks and the only way to power them down is to gather various pieces of machinery scattered through the area, a western area called Dry Gulch that is perhaps the shortest of the bunch but gives players a chance to act out a spaghetti western or simply hack through it using robotics perks while taking down new worm enemies that bury underground and burst out of corpses, face off against spliced Gatorclaws while interacting with a Tarzan-like human in the Safari Zone, dealing with neon painted ghouls and tricky obstacles in the irradiated Kiddie Kingdom, and more.

The fun of each of these areas allows players to constantly feel like they are experiencing something new as they go from area to area while facing off against new enemies, generally acquiring new loot that is unique to that spot, and finding plenty of collectibles that are scattered throughout the park as Nuka-World’s DLC offers twenty new crafting recipes that transform Nuka-Cola into a variety of boosting affects that provide various buffs such as recovering large amounts of health, restoring AP, boosting stats, and more. Where Nuka-Cola would generally be ignored unless it was a Nuka-Cola Quantum, players will be eager to pick up anything they see especially since a number of new standard types are also introduced. 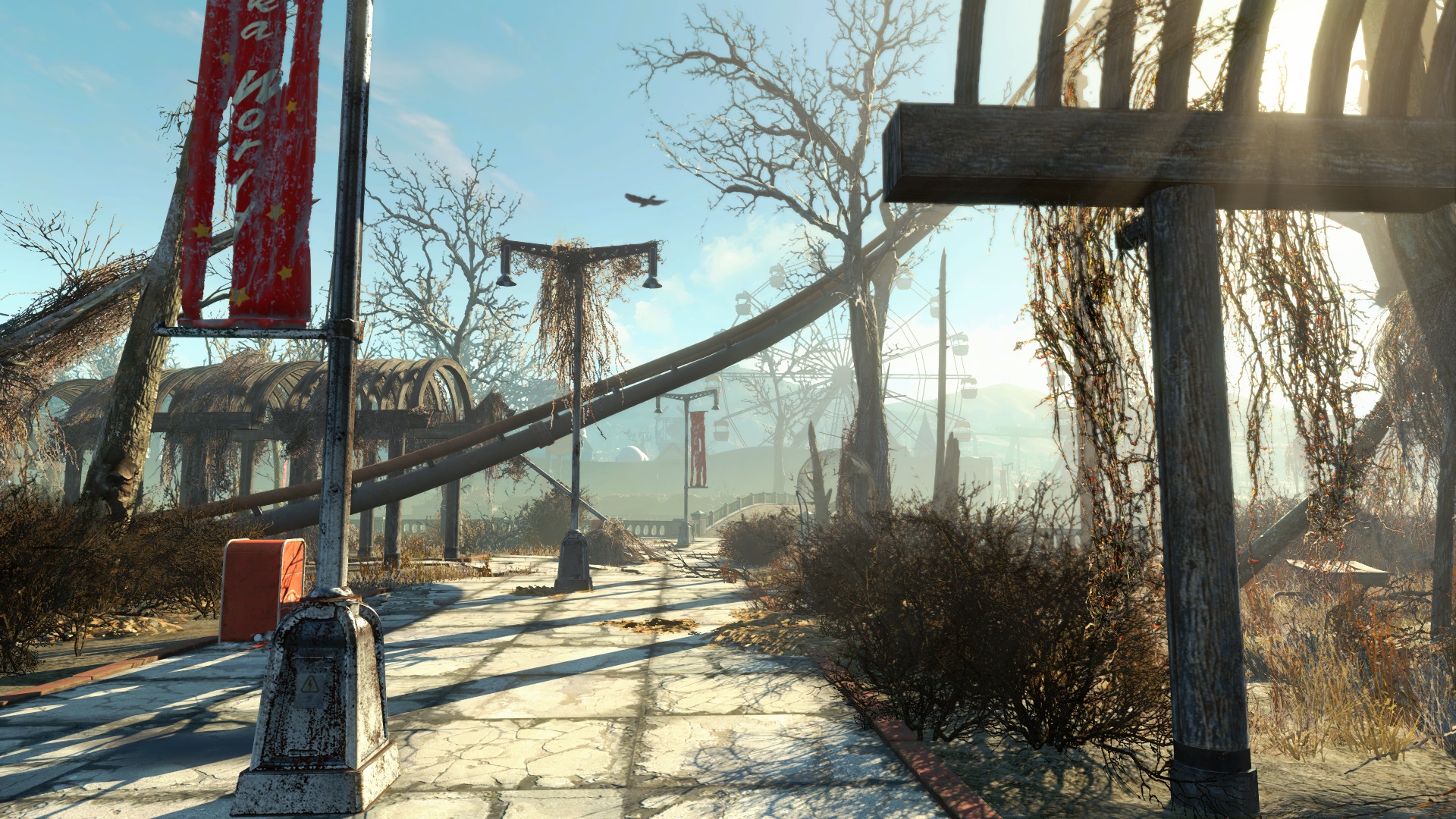 As you’ve probably noticed, the lack of real story development or giving your choices any worthwhile impact means that Fallout 4: Nuka-World is the type of DLC that is all about combat and taking what you want by force, though as mentioned there are a couple of choices you can make to not be quite so evil while on this path. This means while there can be a few humorous side-quests to undertake, the majority of your time here will simply be spent gunning down the mutated creatures and robots in the park while doing little else so those hoping for a bit more roleplaying or story elements like Far Harbor will be disappointed.

Once you’ve taken the park over, players are given the option of taking and attacking the Commonwealth with a bandit gang of their choice. Attacking and taking over settlements while also subjugating others to serve your gang by providing them food and water makes for a unique little twist on the settlement option of the game though there really isn’t much depth here other than the ability to negotiate and threaten the settlers off their land rather than simply plow through them like the monster you want to be, though that tends to be the more enjoyable option. 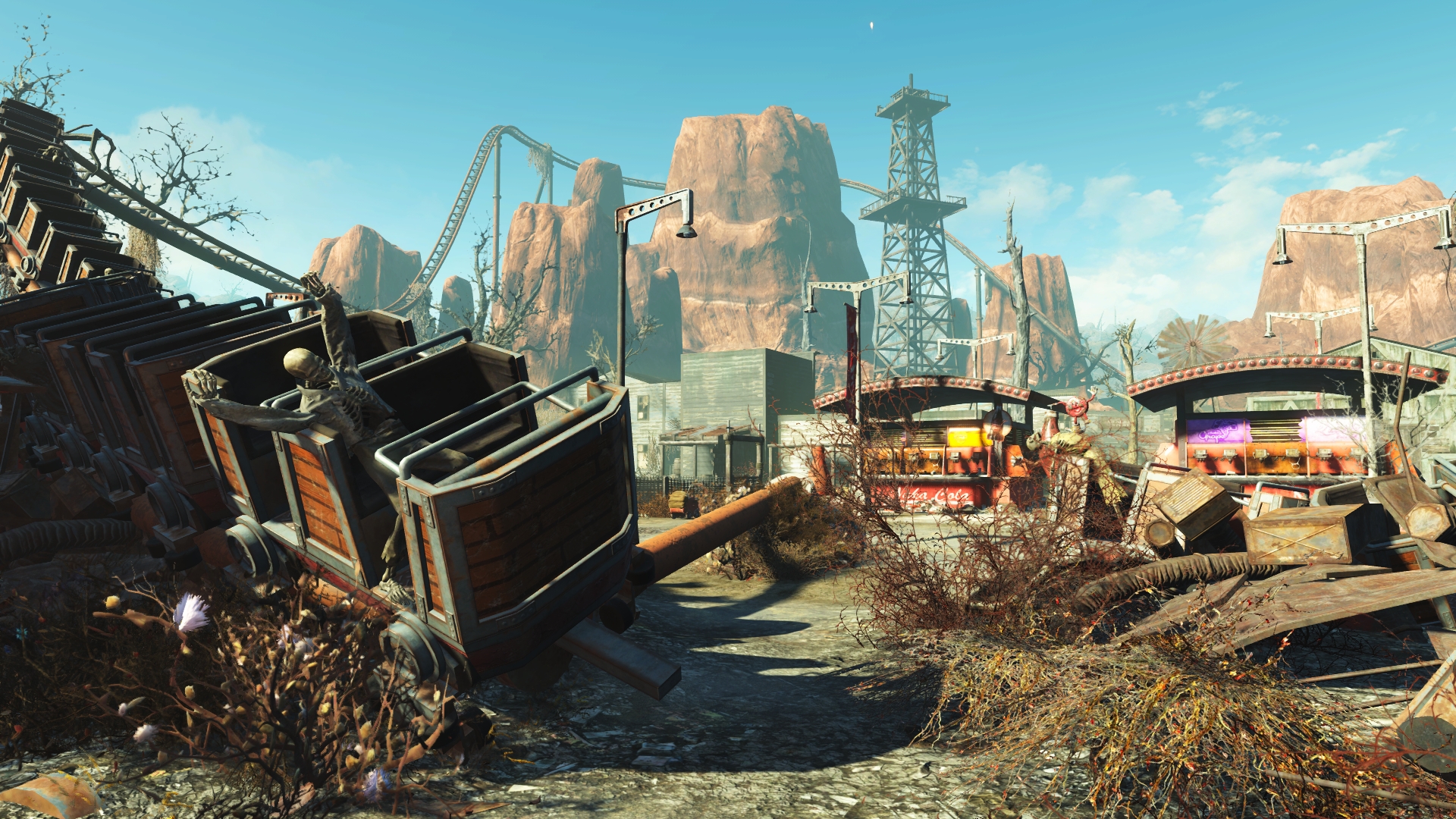 This being a Bethesda title, one can expect various bugs to raise their heads but it is worth noting that throughout my time with Fallout 4: Nuka-World I encountered a particularly nasty one that forced me to start the entire DLC over from scratch as an NPC required to advance the story refused to say anything more than his initial praise for liberating every area of the park. This issue appears to be quite common and, at the time of writing, hasn’t been fixed so those who do wish to take on Nuka-World will need to keep an eye out. Other glitches such as gang leaders refusing to offer additional quests or talk in any form appeared fairly often as well but resolved themselves with simple reloads unlike the aforementioned problem.

The world present in Fallout 4: Nuka-World is far more colorful than many fans of the game will be familiar with as the various areas all feature unique structures and designs in an effort to help make every area fresh feeling. Even though most enemies tend to simply be reskinned, they are exotic enough looking to work well with this theme and players will be pleased that a number of new pieces of strange armor is available for use, even the special Nuka-World suit worn by the poster girl. 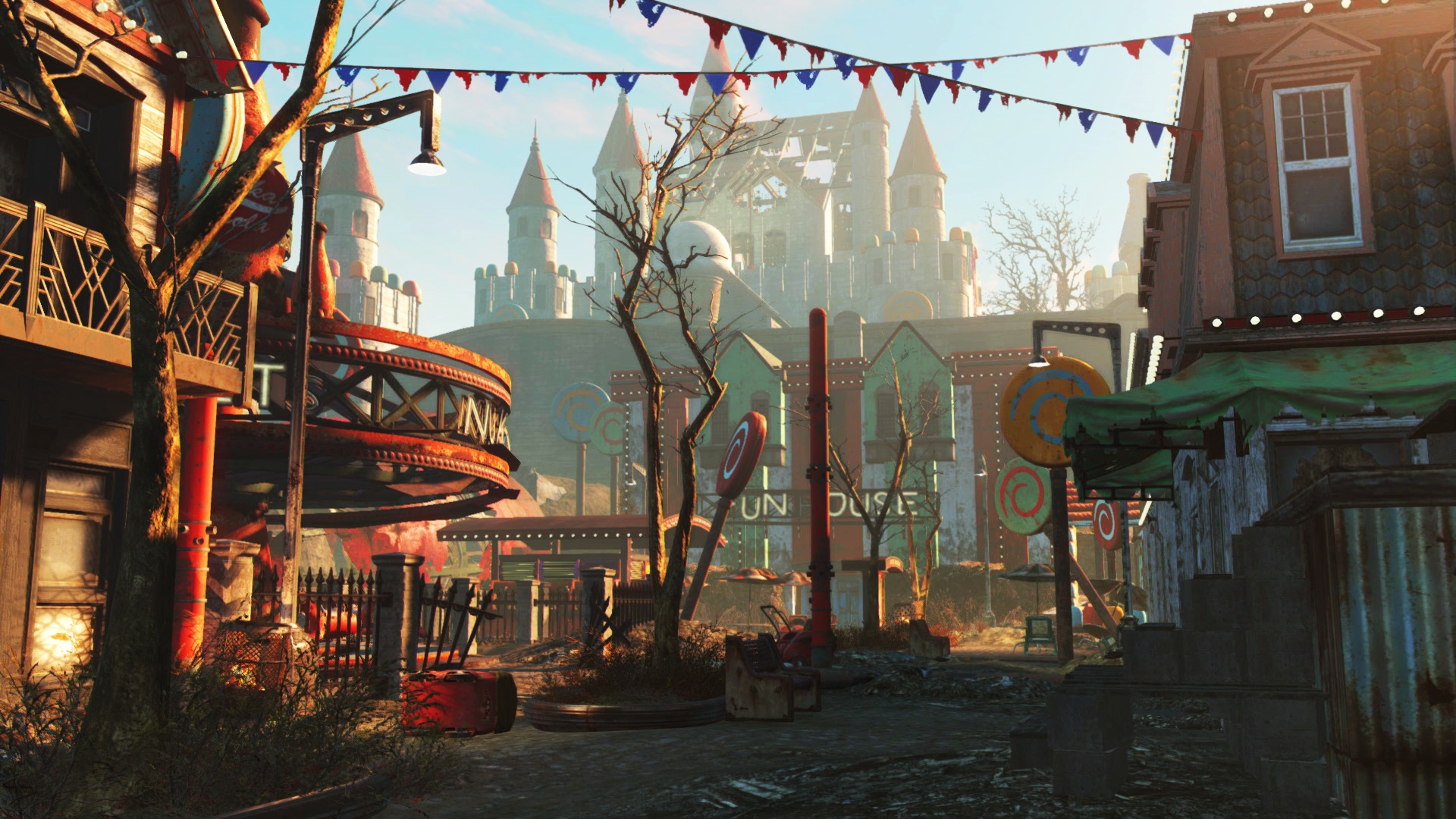 The voice work throughout this DLC is fairly standard and fitting considering the gruff nature of the bandits that players will be dealing with though it is nice to note that the soundtrack does feature a number of unique themes that fit the hubs that players explore.

Fallout 4: Nuka-World offers a densely packed experience that constantly throws new experiences at the player thanks to the fresh designs and enemies in each hub area. With plenty of collectibles to gather, new abilities with settlements, and new items to craft and gather, players will be spending a lot of time fighting through the heavy hitting enemies in Nuka-World, though since combat is the focus be prepared for a forgettable storyline and very little consequence to your actions.

Fallout 4: Nuka-World is impressively designed and offers plenty of surprises and fun combat though lacks a meaningful storyline to really draw players into the experience outside of giving them the reigns of a bandit group.
7