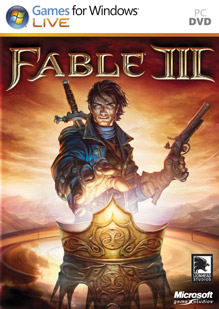 Fable III is a story of a Prince who must lead a revolution against his Tyrannical King brother and save the kingdom from an unknown darkness. The game is an amazing title that will amuse it’s player base for hours on end.

The story of Fable III is actually really interesting as well as entertaining. It is also presented in a fun manner and can be approached by gamers of nearly any age.

The story itself isn’t your typical hero story, but still follows the heroes journey archetype of storytelling. The story told follows the journey of a Prince to a kingdom that is currently being ruled by a King who is oppression-istic but also believes that he is doing the right thing. Very early into the story the player character is shown just how poor a ruler the current king (his older brother) really is and takes it upon himself (or herself depending on the gender you choose) to embark on a quest to gain allies in a revolution to overthrow the king and save the kingdom from a decline in health as well as from a great and powerful evil. 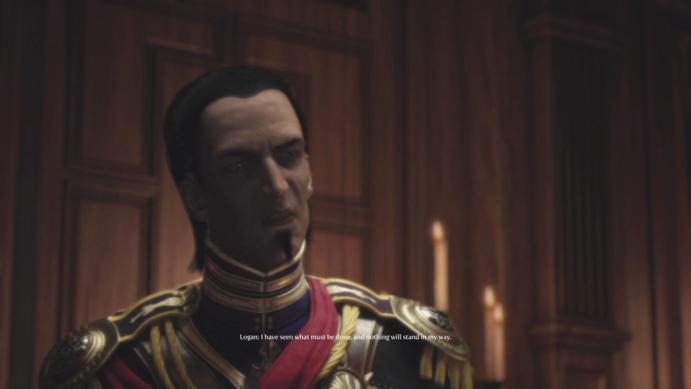 This guy is that King.

The games story is pretty straightforward, though the player can choose between certain paths within the story like, say, promising to rebuild an academy and then not going through with it. But other than influencing the way certain events happen, you can’t ultimately make the story up as you go. The game doesn’t suffer for this at all though and is stronger for it. The story can be put on hold at almost any time though, and I’m sure that enterprising players would have worked out that it’s more beneficial to take your time and accumulate resources as early as possible, considering all the story elements that require them.

These elements? Well one of them is the Road to Rule. This road is a gated path along which the hero is prompted travel across after certain events within the story up until it reaches the doors of a castle, which signifies that you are now ruler of the land. The area is a separate playing area as the rest of the game and can be visited at any point after you have initially travelled to it. Scattered along this road are treasure chests, which are opened by Guild Seals which increase your stats and emotes. As a story mechanic, the hero character is led upon the path by Theresa (the little sister from the ‘first’ Fable game on the original Xbox) and she remarks upon the heroes progress as a kind of guide to the character. As a story telling device, the Road to Rule is excellent because it represents a way for the player to accurately gauge their progress within the story and it also stands as an interesting way to present progression for a characters abilities. But what I like about it the most, is that it allows you to choose how you want to upgrade your hero. Mine ended up maxed out in spells and ranged weaponry with no upgrades in melee at all. 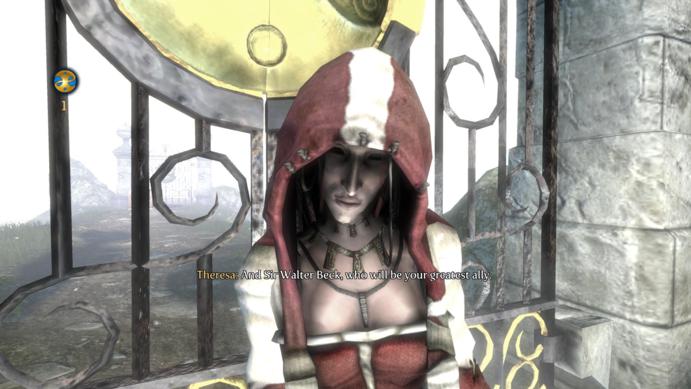 Theresa, showing off the Road to Rule.

The other element comes into play once you’re actually king. I don’t really want to be spoiler-iffic so I’ll just leave it as ‘You’ll know what I mean when you get there’. I should point out that I was completely unprepared for this element of extreme hoarding and ended up leaving my pc on overnight, just so I could make the incredibly large amount of the element just so that I could beat the game without looking like a complete d-bag to my compatriots and my people.

The story is about more than a simple revolution, however. It is also a story of fighting a great evil. Unlike most games, where you’re aware of what it is that you’re fighting right at the start, you don’t find out about this great evil until towards the end of the primary storyline. I found this to be a really interesting way to handle things.

The one thing that I didn’t like about the story though, is that early on you’re given the choice of saving a small group of people or saving a close female companion. Should you choose the female companion (as I did) she does not show up again throughout the primary storyline at all. I mean, to me she was kind of important, because it was this same choice that prompts the primary character to undergo the quest to lead a revolution and rule the kingdom properly, a reunion in a primary questline should have been in order for this character, but she’s instead regulated off in a sidequest that most players won’t undertake or even realise was there considering how limited it is in availability.

For anybody who has played any of the previous Fable games, or even The Witcher 2, you will feel pretty comfortable with this game. For my play through, I used an X360 controller and the control scheme was very user friendly. However, I should point out, that I also messed with the keyboard and mouse controls.

The Mouse and keyboard input was very easy to pick up and play with, but it was a bit different in play-style to the Xbox controller. First, you had to switch between combat modes using the mouse wheel or toggle on the keyboard, and second, the way some combat modes played varied between the control types. For instance, with magic I found that once you get the required upgrade for two different types of spells, you could use both the left and right mouse buttons to fire the spells at enemies as opposed to both simultaneously while using the controller. This dramatically changes the tactile of combat and allows the player a greater level of flexibility when it comes to their combat options.

As an aside for combat, I’d really recommend taking it off easy mode, as it was largely unchallenging. But your own skills should ultimately decide how you want to experience the game. 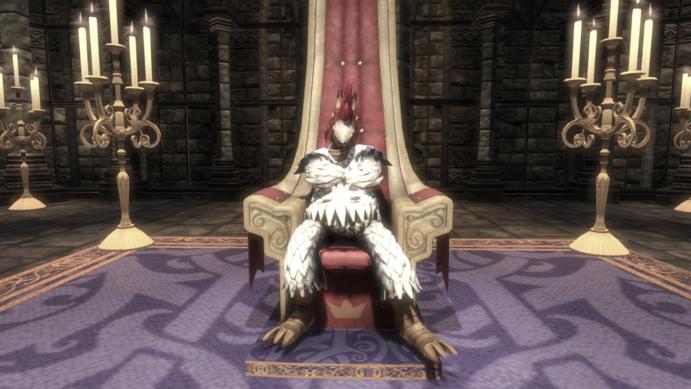 Deal with it, yo.

Outside of combat, players are able to converse somewhat with the villagers and other NPCs of the game. This done differently to how it was done in previous Fable games, as you no-longer just emote within the vicinity of a group of NPCs to get their attention and build a massive heart above their heads. Now you do this more personally with each NPC and emotes are separated by types, rather than allowing you to choose from a list of ones that you have already unlocked. So say you want to be friendly with someone, the game will have a good emote planned out for you, like shake hands and after you do that, you will be able to do another pre-selected emote of that same type. While it’s not as personal as the previous Fable games (I would just used to run to a group of NPCs and let out a joke in front of a large crowd), it still works with this game, but I think that the old system was a bit better. And of course, building relationships with these NPCs is important if a player wants to start a family in the game. Though, to build between relationship levels, a player must complete some kind of quest as well as take their chosen NPC out on a date.

Again, players upgrade themselves in the usual Fable manner, eat lots of meat and you’ll get fat, use swords a lot and you’ll build strength and etc. However, unlike previous entries in the series, players will not be accumulating points in one of three areas, but are instead just accumulating Guild Seals to spend on the Road to Rule. The one thing that I really loved about upgrades in this game is that if you use tonnes of magic spells, you get this glow across all of your tattoos, it looks insanely awesome. Another thing that I really loved is that any weapon you obtain can be upgraded based on how you use it, you get some pretty awesome looking weapons because of this.

Fable III carries the Fable aesthetic to new heights. This probably the most visually stunning entry in the series. I don’t mean it in a way that is to discount the first because it appeared in the sub-HD era, but there is this one part of this game that absolutely sold me on this idea. And that area is this big desert area. It also features my favourite monster in the game, these desert women that resemble a Tusken-Raider from Star Wars crossed over with the combat abilities of a Gerudo from The Legend of Zelda. It also helps that they are incredibly sexy beasts.

I mean, like, most of the usual Fable monsters are here and given a slight increase in visual fidelity, the Balverines are as scary as they always have been, the Hobbes are still fat-deformed people-like things and the Hollow-Men are still skeletons, so it’s still all very Fable-istic and each monster is easily recognisable to anyone who has played any of the previous games. 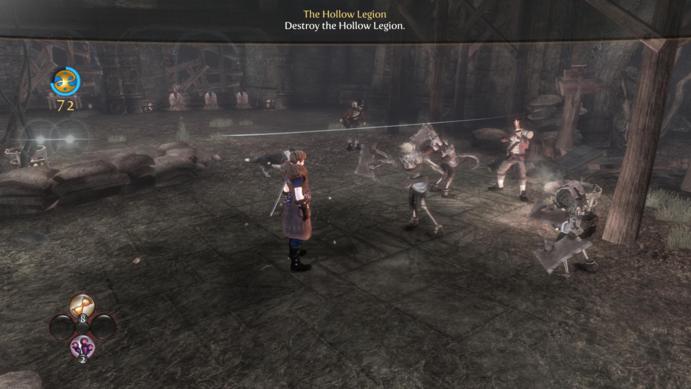 Overall, I’d say that graphics are greater than the Xbox360 version of the game from what I’ve seen of it, but it’s not an incredible improvement. Just a vast one. Speaking of graphics quality though, playing with the graphics settings in the game, the difference in quality between ultra high super-special-awesome detail and incredibly low detail isn’t that much at maximum resolution, but it is still a little noticeable. Like, you can tell something was changed, but you’re not too sure what it was. It’s obvious in an un-obvious way, it’s pretty sweet. Just make sure you turn V-Sync off, it doesn’t like cutscenes.

Overall, I love that they haven’t messed with the visual style that clearly makes a Fable game, a Fable game. It’s also really cool that so much effort has been put into making the game as visually as pleasing as possible between graphical settings.

Time to Windows Media Player should be a legitimate way of measuring how good a games audio is. Assuming it was a standardised measurement unit of audio quality for a game, this title will have scored well on the charts. Not once did I get bored of the soundtrack, it was just so good. 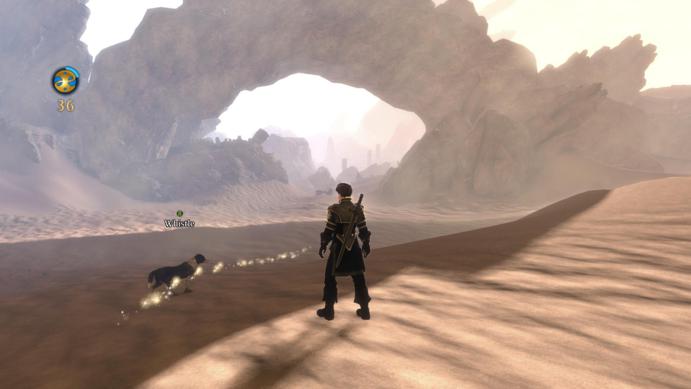 Audio makes the most visually stunning area even more awesome.

The music, effects and other noises in the game all fit their roles well and blended together amazingly. I always find it hard to comment on audio that is done well, because it’s a lot easier to complain about something bad than it is to work out why something is really good. Bad is obvious, good is subtle.

Fable III for PC is an amazing package. I would heartily recommend this game to anyone with a PC built in the last 3 years, or for some people; earlier. The game is an amazing blend of action, questing and story that you will find yourself drawn into the world and it’s characters with ease. Apart from a few minor issues I had with with the game, it’s an amazing package that everyone should enjoy.