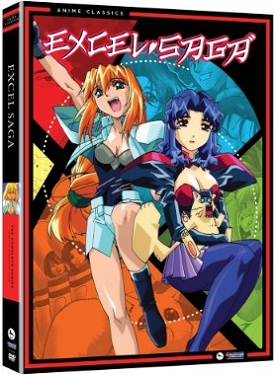 Overview:
There are many ways that an anime can be considered a comedy. It could be a show that features occasional jokes or strange situations, or one that makes snide comments about modern life or any number of things. Another way it to be absolutely wacky and random in such a way that even veteran anime viewers will be unsure of what is going to happen next.

One such show is Excel Saga, released back during 1999 in Japan the show deviates and follows a completely different storyline than the one originally set in the manga of the same name. With zany and completely off the wall humor, Excel Saga was a show that many who watched it could not easily forget. Now that FUNimation has rereleased the entire twenty six episode package under their Anime Classics label, how does this crazy show stand?

Story:
The story of Excel saga is something extremely strange to describe. The main storyline that the show seems to follow is about a teenage girl named Excel who may be classified as clinically insane if a doctor ever was able to keep her still long enough to analyze her mental condition. Excel is a devout follower of a man named Il Palazzo who is the evil mastermind behind his own little organization known as ACROSS which is trying to take over the world. It just happens however that they have absolutely no idea what the world they are doing and the crazy tasks that Il Palazzo set Excel and her eventual partner Hyatt on usually end up making absolutely no sense. 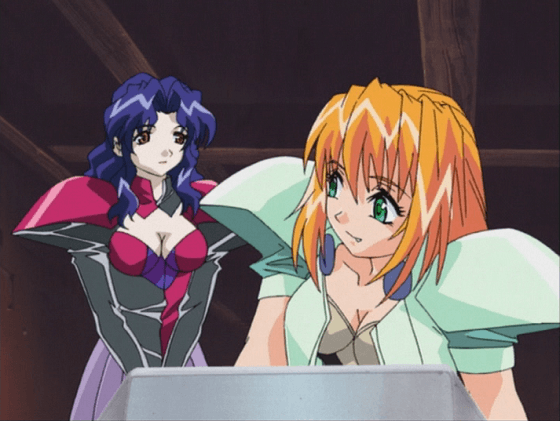 If that wasn’t enough, there is also a side storyline about a construction worker named Pedro who is an extremely hard worker who loves his wife and child. However due to many strange circumstances the man gets taken on an odd journey away from his family. This is only the tip of the iceberg however as various other characters and references are thrown in completely at random, with only occasional intersections of storyline. Because of this there are numerous storyline arcs that run at one time which can make it extremely easy to get lost, but that may also be because of the amount of laughing that the viewer will be doing.

Nearly every episode of Excel Saga is a spoof of some kind or complete and utter randomness. The show can switch gears from an action styled show to a romance, to horror to flat out comedy with every episode that passes. Most of these are pure spoofs of the genres they involve, including an episode titled “Increase Ratings Week” which involves the female characters wearing swimsuits. The amount of tongue-in-cheek humor delivered towards the anime industry as a whole is certainly a highlight for experienced viewers. There is heavy adult humor as well with plenty of vulgarity and many weird references that while some people may still not end up getting, will be enjoyable in their own right simply because the viewer will be left to interpret what the hell they just saw.

Besides being completely random, there is indeed excellent humor involved thanks to the characters themselves, the slapstick based skits and the convoluted plot that usually makes no sense. There are many moments where a character will be killed only to be back in one minute like nothing ever happened.

The only problem is that Excel Saga may be extremely difficult to get into at the start. The craziness of the show is something that takes a bit of time to get used to which can be a problem at times. Plus this isn’t a show that would be good for new anime fans as the humor often references specific anime tropes and could leave them in the dark at times.

Artwork:
Excel Saga is quite an odd show to say the least, and of course the artwork has to be right up there with it. However with all the zaniness occurring at a time, the artwork does a remarkable job of being extremely high class at times and then being rather low class in quality. The low end usually comes when the characters receive some form of deformation to help heighten the hilarity of a gag or when they go nuts. 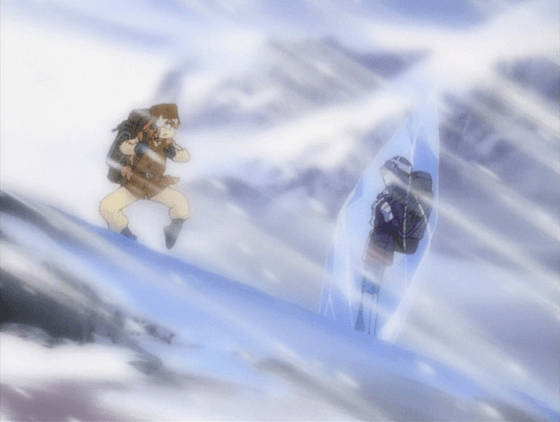 Still, the show is made from 1999 so don’t expect anything remarkable as far as the drawings are concerned. There are plenty of styles to be seen here however, usually changing every time the theme of an episode changes. The artwork is always consistent in quality without any errors or significant drop in overall quality without reason which is a major plus to the series and I couldn’t find any noticeable shortcomings.

Audio:
Considering how random at times the storyline can be, there are a lot of characters that have to be voiced and acted out in Excel Saga. Excel Saga contains both the original Japanese voice cast as well as an English voice cast. The English dub does a great job keeping up with the crazy actions that take place all of the time which makes me wonder how the recording studio sounded at times. Still, the Japanese voice actors actually do a perfect job with their characters which heightens the overall experience, which means that some may prefer the original Japanese dub with English subs instead.

There are a few strange songs as well which match the lunacy of the show. The opening song is sung rather poorly but this is meant to be the case and is set to very strange visuals. Dancing and singing in the middle of a man’s bathhouse anyone? The ending song is extremely interesting however as it is barked out by Excel’s dog Menchi which is called “The Bolero of Sorrow.” The song is very interesting and is a delight to hear mostly due to there being practically nothing ever like it. 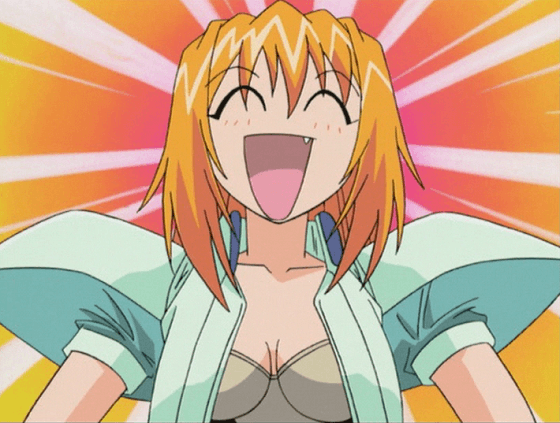 Characters:
There are a plethora of characters in Excel Saga and most of them have very strange quirks about themselves but the main highlights are the two female leads Excel and Hyatt. As I mentioned before, Excel is a crazy character that is extremely hyper and off the wall. I’ve seen many characters who have acted insane before, but none can surpass Excel.

Hyatt on the other hand is a more soft spoken character and can be seen as a beauty by some. That is of course until she just bursts into spouts of blood and falls over dead or passed out. Hyatt is one of the characters that is extremely difficult to understand and her frailty is the centerpiece to her character. Besides the two female leads, a rather unusual dog stands out as well.

Named Menchi by Excel, he is kept as their pet dog. However they have another name for him as well, Emergency Food Rations. The dog is mostly kept because they will eat him if they ever grow hungry enough to do so. It would be impossible to count the amount of jokes that are made and alluded to the eating of poor Menchi. Even Menchi himself knows this as the aforementioned song is all about how he would like to be cooked and eaten. Which would be such a shame as his side antics in the background are usually a great highlight to any scene he is in, as well as his constant attempts at escaping from Excel which could try to turn him into diner at any time. 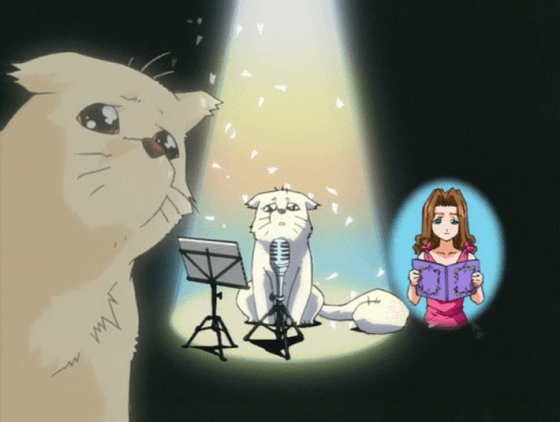 Extras:
There is a rather surprisingly large amount of extras to be found on this release of Excel Saga, including your standard clean opening and ending songs as well as trailers for other FUNimation releases. But the other bonuses are quite abundant, even though they may not be the most exciting at times.

There are Japanese television spots and trailers as well as soundtrack spots that were used for promotional material in Japan as well as a ton of tiny extras involving the show Puni Puni Poemy which was actually a spin-off of Excel Saga that was developed at a later date. The extras include a preview for the show, an interview with Yumiko Kobayashi and much more. The extras are good for a quick look but even though there are a lot, most will are barely worth a second viewing.

Overall:
Excel Saga is a very enjoyable show that, despite its rather convoluted and off the wall storyline is extremely hilarious and can be very fun for those who have seen plenty of anime. New anime viewers should probably steer clear simply due to the randomness that can be off putting to those who aren’t familiar with many types of anime. On the other hand, there are so many references to other anime and their themes that viewers will constantly be seeing something new and laughing at the on-screen antics. Excel Saga is a show that follows almost no guidelines except its own and would be hard to pass up.

I give Excel Saga: The Complete Series