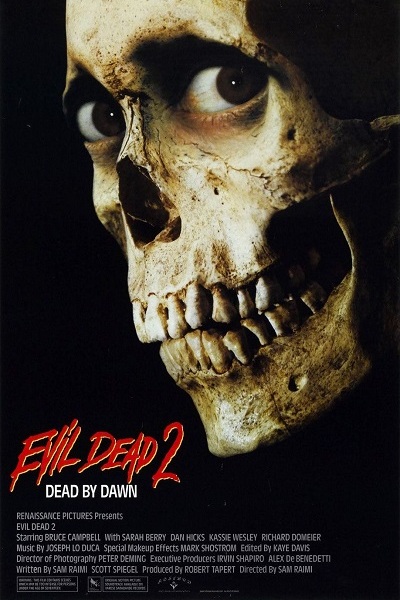 In the House screened Evil Dead 2 as the second film in their Halloween double feature screening. Directed by Sam Raimi, the Evil Dead series is a tongue-in-cheek horror comedy with a pretty strong cult following (at least among my friends). The film originally came out in 1987, and I unfortunately haven’t had the opportunity (or taken it upon myself) to see it. I was glad to see that it was on the bill for In the House this year.

This film was the follow up to Se7en (which you can read about here) and provided an interesting and fun contrast to the heavy themes and story of the first. Before the film started, MCs David ‘Quinny’ Quinn and Jason ‘Jabba’ Davis held a costume contest with prizes. A number of Ash William cosplayers (some with moving chainsaw hands) came down to the front and were awarded prizes. They followed this up with talking about some of the film’s trivia. An interesting tidbit for me was the fact that all the shots which have actors being whacked in the face with branches were shot with Raimi himself being the one waving those branches about in people’s faces… and that Evil Dead 2 was not an isolated incident of this occurring as he’s apparently gone on in his career to smack other actors in the face with various objects on camera. 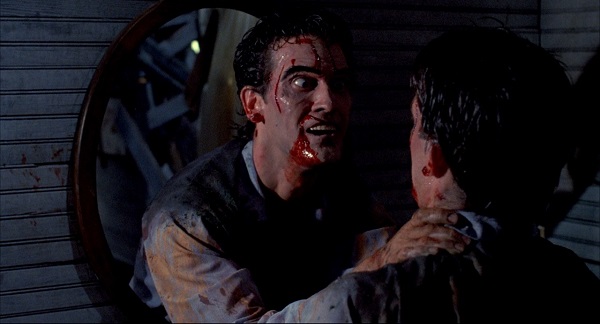 The narrative begins with a focus on Ash Williams (Bruce Campbell) and his girlfriend Linda as they a romantic vocation to an abandoned cabin in the woods. While there, Ash plays a tape recorder from the cabin’s previous inhabitant, an old archaeologist, who recites pages from the Necronomicon Ex-Mortis (the book of the dead). Reciting words from the book ends up summoning an ancient evil from the darkness of the woods which possesses his girlfriend, forcing him to kill her. The evil spirit then possesses Ash before losing control as the sun rises. He unsuccessfully attempts to escape the woods and becomes trapped in the cabin. 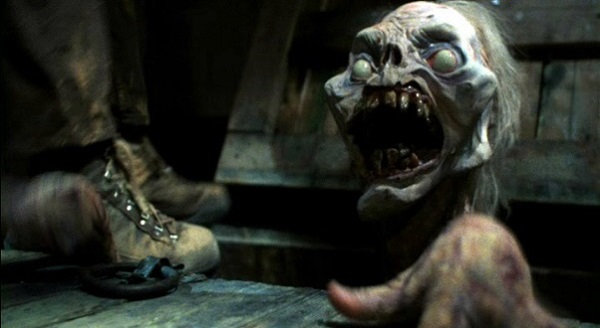 As the evil presence torments him, we see his sanity start to fray. The evil presence torments him by reanimating his recently deceased girlfriend and attacking him once more as a ‘deadite’. Furthermore, his hand becomes possessed and attempts to kill him after being bitten by the severed head of Linda. After a hilarious sequence where Ash fights and loses to his own hand, he is finally successful in subduing his hand and promptly cuts it off. His severed hand continues to attack him throughout the night. 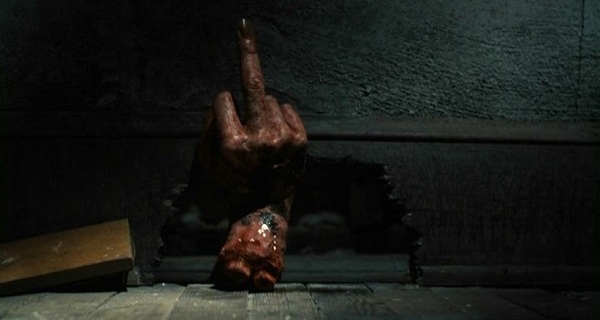 Meanwhile, the daughter of the archaeologist finds more pages to the book and decides to visit the cabin with her partner to see what her father will make of it. After securing the help of a redneck couple, she’s able to make it through the woods on foot to the cabin and are mistakenly attacked by Ash. After subduing him, the group settles in and they soon learn of the ‘deadite’ threat to which lurks in the cabin…

Lets agree straight off the bat that the narrative in the Evil Dead series is not the most intellectually stimulating. A lot of the time’s it is nonsensical and even inconsistent with the rules it has set up in its own fictional universe. In some movies, this can become a sticking point where the audience loses all belief in the plot as the story no longer retains any sort of coherence or sense. This is not the case here, as Evil Dead 2 displays some of the series best over-the-top moments which create enough spectacle to make you to laugh through any (reasonable) concerns you might have. 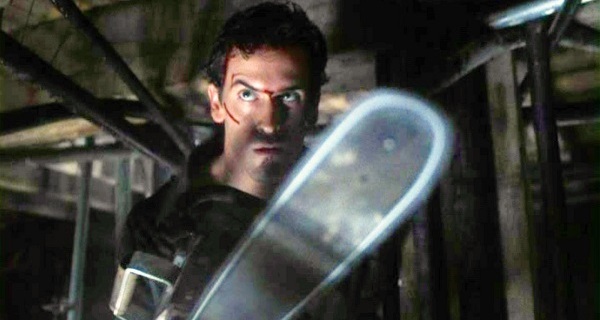 The performances throughout the film are generally suitably hammed up and over-the-top which is a joy to watch. Campbell as Ash is delightfully B grade with every expression and line delivered with such camp that I couldn’t help but smile. His chiselled chin, dulcet voice, and near perfect ‘crazy eyes’ made him perfect for the role. The dialogue might be clumsy and convoluted but dang if the whole cast make it work with comedic timing to become something charming.

The visuals in Evil Dead 2 are timeless. Raimi doesn’t just throw blood on the actors and set in small patches here and there… but rather takes a more liberal approach to gore. There are buckets upon buckets of blood (probably delivered with a fire hose) that he aims at his actors. Everything is so over-the-top that even I, who does not do well with blood or horror in general, could not help but laugh at the ridiculousness of the movie. Subtlety is not this films strong point, and that is a point in its favour. 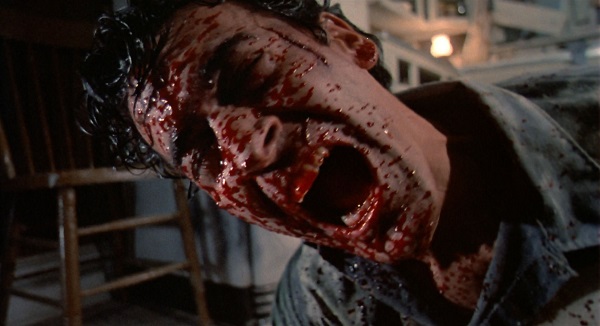 One instance which comes to mind is where Ash is tormented by the reanimated corpse of his deceased girlfriend. She doesn’t just come back as a shambling zombie, she comes back and does a dance atop her own grave. She doesn’t just come at him with her bare hands, but steals a bloody (not literally) chainsaw to charge him with. It’s this unrestrained ridiculousness which made the movie easy enough for me to watch without being too unsettling. Kudos! 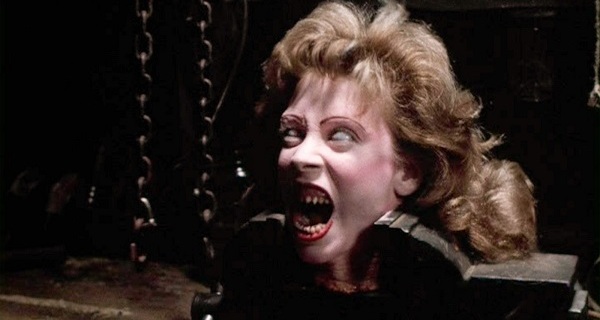 The soundtrack matches the film’s B grade tone with suitably corny tracks to match the scenes. Suspenseful moments are accompanied by plenty of screeching strings while horns punctuate deep notes of doom. It’s as corny as the rest of the movie and adds to the charm.

I loved this movie far more than I thought I would as I’m not a fan of horror films to begin with… but this movie is a rare exception. The absurd story and performances sold the film to me for the hilarious horror comedy that it was. The visuals are surreal and hilarious in equal measure in just how over-the-top things can get while the soundtrack is suitably corny to boot. It was a ridiculous amount of fun to watch and I enjoyed myself much more than I thought I would. I can recommend it unreservedly for horror fans for those who aren’t. Kudos to Raimi and Campbell for making such a fun film and kudos to In the House for screening it in a cinema!