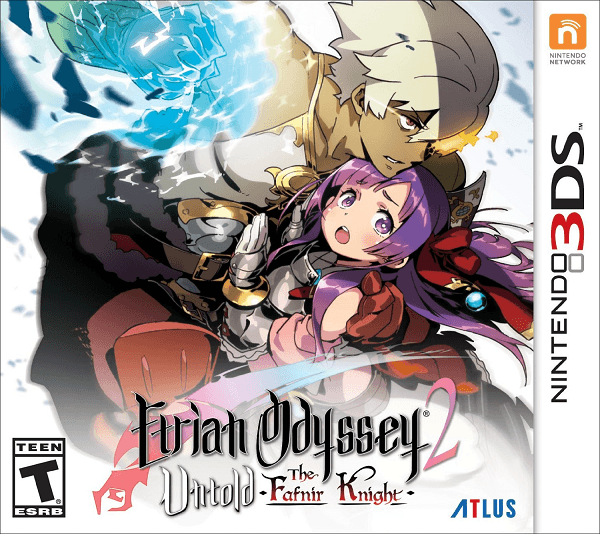 Story
Just like the release of Etrian Odyssey Untold: The Millennium Girl, Etrian Odyssey 2 Untold: The Fafnir Knight offers both the classic game mode where characters create a party of their own and venture out on a journey supported by a basic arc lacking any substantial theme and a new story mode where they take on the role of the main character, The Fafnir Knight, who is named by the player and never actually speaks as he is instead surrounded by a colorful cast of pre-set characters. 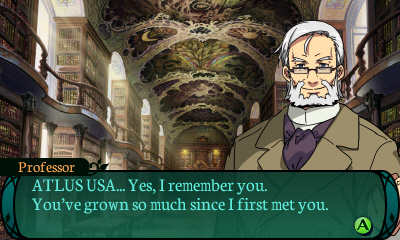 In Etrian Odyssey 2 Untold: The Fafnir Knight, The Fafnir Knight and his friend Flavio are assigned a mission to explore the Yggdrasil Labyrinth in order assist the Princess of Caledonia, Arianna in a test run through the first level of the dungeon. You see, Arianna is on a mission of her own to carry out a specific ritual that must take place every century in the mysterious ruin called Ginnungagap and the trio quickly learns that their paths are intertwined and it isn’t long before they are joined by a mercenary protector named Bertrand and the deadpan sorcerer Chloe.

To go too much further into detail about the exact specifics of what will be happening in the title’s storyline would be providing spoilers that are best left experienced by the player, though don’t expect anything too spectacular. That being said, those who happened to enjoy the first game in the series for what it was, or had issues with the way it was told, will be happy to hear that Etrian Odyssey 2 Untold: The Fafnir Knight does an even better job than the first game by giving all of your party members fairly standard personalities to begin with only to develop over time into characters you’ll actually care about in some form. 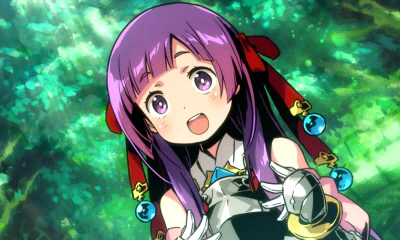 The writing also benefits from great localization work that creates great chemistry between the team anytime they happen to talk with one another, which is quite often since plenty of dialogue sequences occur in the main hub and even more take place while exploring the dungeon, serving as a great way to break up some of the longer dungeon crawling sequences with entertaining moments between the party.

Gameplay
Anyone that has attempted to play an Etrian Odyssey game knows that the game is known for two prominent features. Exploring dungeons while fighting against enemies in turn-based combat from a first person perspective and drawing out maps (now easier than ever in The Fafnir Knight due to there being far more icons than before) to navigate the labyrinths that make up the various floors in the game. Everything here still rings true in Etrian Odyssey 2 Untold: The Fafnir Knight but just like in The Millennium Girl, things can be as easy or difficult as you wish. 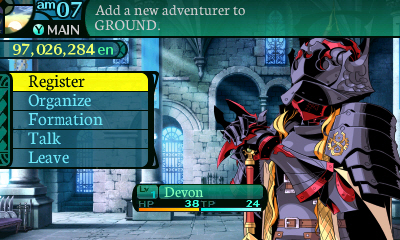 When you begin playing the game it is possible to select different difficulty levels, with Standard providing the expected level of difficulty and Picnic allowing for not only easier combat against enemies but also unlimited revives against enemies in a dungeon without going to a game over screen. Of course if you want to be as difficult as possible, you can try and tackle the Expert difficulty which will give players a run for their money. The mapping feature is also handled in a similar manner as players can either opt to have the extremely basic details of a floor auto-mapped, such as the basic path, no auto-mapping whatsoever, or have the game fill in the exact layout of the floor minus special locations as you traverse through it.

This includes the returning “Floor Jump” feature which is unlocked by fully completing a map for a level, which helps speed up certain missions that require a bit of backtracking. By offering a mode hardcore fans will be delighted to experience as well as an option for players who simply want to enjoy the game or may be picking up an Etrian Odyssey game for the first time Etrian Odyssey 2 Untold: The Fafnir Knight opens itself up to newcomers while still offering plenty of challenge for hardened veterans to conquer with as little assistance as possible. 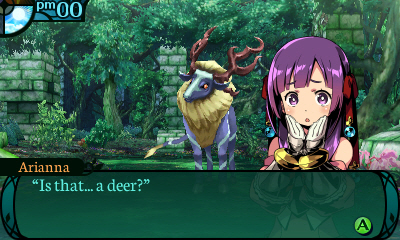 Encountering monsters remains the same as before, for the most part, as players will randomly encounter monsters within the mazes with an icon appearing in the bottom right of the screen showing how close the player is to entering combat. The extremely dangerous FOEs also roam their set patterns throughout various dungeons and anyone who has played the game before knows that FOEs are massive monsters that are visible threats that will likely annihilate your party when encountering them for the first time. This means that unless you choose to level up and return to conquer these dangerous beasts for great rewards, it is best to avoid FOEs by predicting their travel patterns with the use of your map. One nice inclusion in this title are dungeon traps that players can lead FOEs into in order to either cause damage to them, allowing for a potentially easier fight, or halt their movement for easy escape.

Once you do find yourself in combat, which will be rather often, players will find themselves facing off against enemies in turn based combat where their party must make use of standard attacks and skills that not only cause extra damage but can also buff allies and debuff opponents. While initial battles may seem like a breeze, you will have to quickly learn to play smart with your party’s skills since many of them complement one another when used properly to target a foe’s weakness. 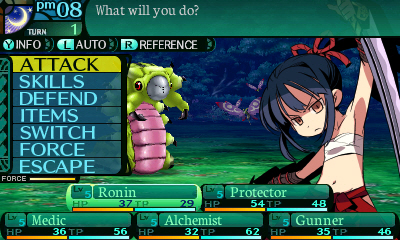 Since the story mode assigns players a set group of party characters, that can be adjusted slightly or even completely changed if you wish, of course the classic mode offers players a long list of classes to experiment with right off the bat and there is plenty of great variety to be had here for those looking for something a little different, especially since Beast classes, such as wolves or tigers, are capable of being added to the party. 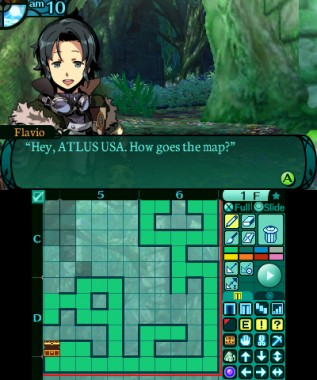 Grimoire Stones, which are items imbued with a certain skill that can be used by a character when worn, also play a large role in designing your character build as they continue to provide players with plenty of little tweaks to mess around with as they try and build the best party possible to explore the dangerous world of Etrian Odyssey 2 Untold: The Fafnir Knight. Of course, with a new cooking mini-game capable of providing players with a wide-range of buffs there are plenty of ways to micromanage your group. Players are given a share of Lagaard’s new restaurant and once players discover recipes they can cook the aforementioned food to provide buffs until a new food item is created.

In fact, the idea of cooking food is only the beginning of an extra management system where players can advertise their restaurant and potentially grow the popularity of the town, allowing more people to show up and open up a new revenue train. The large amount of mechanics at play in Etrian Odyssey 2 Untold: The Fafnir Knight may seem like a huge hurtle to newcomers at first but thankfully the story mode slowly introduces these mechanics in a manner that makes them easy to understand.

It is worth noting that one of the original complaints in the first Untold game was the fact that despite offering both the brand new story mode and the classic mode, the title only sported one save slot. Thankfully that is no longer an issue as Etrian Odyssey 2 Untold: The Fafnir Knight offers multiple save slots allowing for players to create a party of their own and brave the labyrinths and not be concerned that they will lose their story progress by doing so. 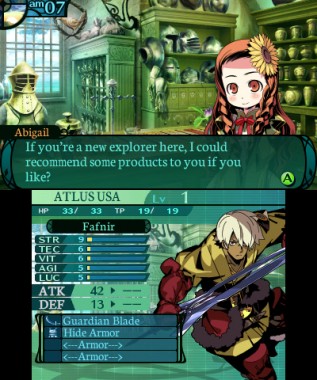 While many dungeon crawlers may recycle the same environments multiple times over the course of the game, Etrian Odyssey 2 Untold: The Fafnir Knight features a wide range of beautiful looking scenery to travel through which makes the drawn out explorations more enjoyable than they usually would be in such a case. This type of presentation does wonders for the amount of time one can spend exploring and mapping out a floor and it doesn’t stop with just the environment as the character portraits and monsters are nicely detailed as well.

It is worth noting that the voice work in Atlus USA’s release of Etrian Odyssey 2 Untold: The Fafnir Knight is only presented with the new English dub and that the Japanese voice track is not included. The English cast does a great job with their cast, something that was a necessity considering how chatty your party is outside of battle and especially in combat. The soundtrack features a number of great pieces of orchestral music that fit perfectly with the scenes they are accompanying, as soothing tones will play when returning home and battles against dangerous bosses are laden with guitar tracks to raise the tension.

Overall
Etrian Odyssey 2 Untold: The Fafnir Knight is an incredibly impressive title that not only offers a more enjoyable storyline than The Millennium Girl but also a number of new mechanics for players to sink their time into. With plenty of customization options available, satisfyingly enjoyable combat, and mechanics that can either make the game enjoyable for newcomers or incredibly difficult for hardcore fans, Etrian Odyssey 2 Untold: The Fafnir Knight is the type of title that you can easily sink countless hours to and still find more to enjoy.