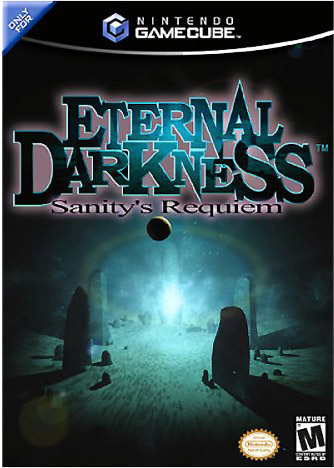 Yes, this is an older game.  Released for the GameCube back in 2002, this is a game most of you may have heard of or even played.  For those who haven’t, you’ve been missing out.

Eternal Darkness is a game I like to attribute to the older Resident Evil titles.  While certainly not an exact match, much of the game mechanics are similar.  While this may not be a good thing, the controls and movement are somewhat similar, slightly unwieldy and clunky.  Both task the player with finding items in the environment (usually glowing or shiny) and using them for some simple puzzle solving.  Both are also in the survival/horror genre, though where Resident Evil claims its horror with a combination of suspense and thrills, Eternal Darkness does it with atmosphere and mind games.

Let’s start off with the game play.  The game is set in the third person and sees you play as 12 different characters throughout 4 different locales which take place in different time periods.  While only 4 environments might sound a bit on the short side, this game will last around 10 hours, give or take depending on your ability and whether or not you desire to scour every level for secrets.  Even though there are “technically” only 4 areas, each time you come back to a previous area it is in a different time period, often opening new/different paths while changing the general feel of each level.  It’s a very enjoyable experience to see past levels in a new light.  Levels are somewhat linear with a decent amount of explorability and backtracking involved.  The game has a somewhat linear style; you play through one character’s story, and upon completing it you shift gears back to the main character, Alex. As Alex you will then do some puzzle solving to unlock the next character to progress the story.

Each level has various amounts of puzzle solving elements.  Sometimes you will need to search for hidden jewelry with which to adorn several statues to unlock doors while others you will need to figure out which alignment spell to use to dispel a shield or reveal a hidden door.  A multitude of items will be placed throughout each level, mainly consisting of ammo with the occasional rune or two as well as various level specific items that are used to progress through the level.  Items that can be picked up generally have a certain level of glow that allows them to stand out amongst the rest of the environment.  Interactive objects (interacted with by pressing B), however, do not have this effect and can sometimes be harder to pick out.

Levels can generally be expected to last from roughly 30 to 60 minutes, with a few of the final levels each taking one hour to an hour and a half.  Along with the various puzzles and enemies you will need to deal with, there are often traps to be avoided.  Traps are usually indicated by odd looking tiles on the ground that, when stepped on, will activate a variety of deadly obstacles such as bladed pendulums that impede your path, darts flying out of the wall, parts of the walls rapidly closing in on you or poison gas.  Holding L to run will help to get past these, though each character will tire at different rates, forcing you to either slow down or stop to regain their breath and strength.

Like the Resident Evil series, this game will find you locked in combat with your fair share of zombies.  Your arsenal will consist of various kinds of melee and ranged weaponry, ranging from a primitive dagger to an automatic rifle, each with their own nuance and style.  Combat is done by holding R to target the body, left arm, right arm and head.  While targeting you won’t be able to move, hence the clumsiness of the game, but it only really becomes an issue in a few fights.  The point of targeting is to sever the limb of your desire.  Cutting off a head will result in the enemy not being able to see you, sometimes even constituting a guaranteed death to the enemy, cutting off arms will, obviously, prevent them from attacking and attacking the body is simply done for damage. If you simply mash the A button (attack) without targeting, your character will do a combo (usually 3 hits) specialized to each weapon.  While great for damage or knocking over an enemy, spamming this technique will tire your character out, leaving them unable to run or attack with their usual speed.

While this game certainly has a decent amount of physical weaponry at your disposal, it also provides a very unique magick aspect that is absolutely crucial to successful play.  Magick is made by finding special runes scattered throughout the game.  Each rune will, at first, be unreadable.  To remedy this, you must find a codex to identify what the rune is.  It takes a minimum of 3 runes to create a spell, one for alignment, one to specify the action and one to specify the target. 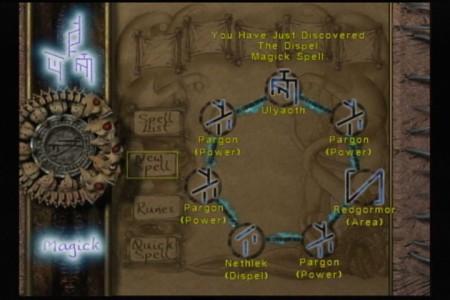 The alignment factor can be attributed to a triangle of power.  Blue->red->green->blue.  All enemies in the game are set to an alignment, which will color how you strategize and utilize your magickal arsenal.  An example of a spell would be Chattur’gha (red alignment)-Bankorak (protect)-Santak (self).  This would create a “shield” (protect) around the “player” (self) with the “Chattur’gha alignment” (red), which would protect the player from magickal attacks, especially ones from the Xel’lotath (green alignment).  Later on you can unlock the ability to create 5 point and 7 point spells, filling in the extra slots with the power rune, pargon, to increase the power/effect/duration of your spells.  Spell casting requires mana to use, which replenishes over time and also requires you to not move or be attacked during the casting of the spell, more powerful spells will obviously take longer to cast due to the amount of runes they take.

A final note on the gameplay that I simply must address is a third parameter tied to the character’s survival.  There is Health, dealing with how much damage you can take, Magick, which determines how much mana you have and finally, Sanity, which will begin to “affect” the game the lower it gets, if it ever drops to zero, any further hits to your sanity will begin to sap your health instead.  Sanity slightly lowers every time an enemy creature notices you or greatly lowers for every innocent you decide to kill, loosening your grip on reality for being witness to such vile abominations.  What happens when your sanity lowers, dubbed the “sanity effect” is what has made this game famous and can seriously mess with your mind.

At first it will start out just by slightly tilting the screen a few degrees, not a big deal but it can wear on you after a while.  Later on it will have you hearing various ambient sounds during the game that aren’t really happening, such as a woman being brutally murdered, some insidious being sharpening a blade on a grindstone, a demonic baby crying or a large creature slowly walking closer to you, becoming louder with each step.  There are MANY more effects, ranging from portraits changing from a peaceful mountain range 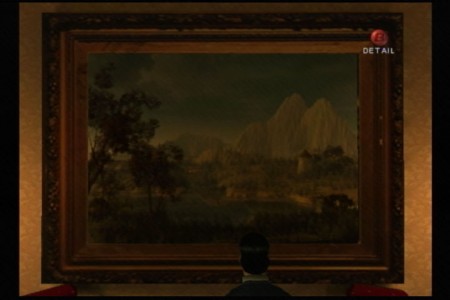 to a horrid representation of Hell 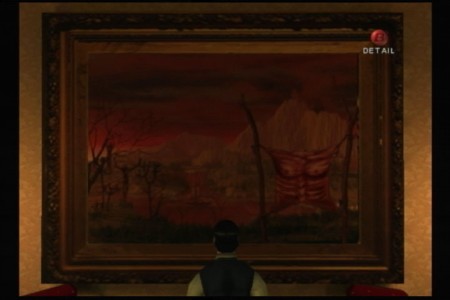 to the next room flipping upside down with you walking on the ceiling. 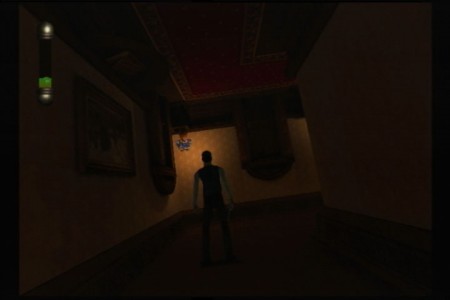 I don’t want to ruin them, but know that many of them will have you question whether these are scripted or not.

Now for the games story, I won’t explain every minute detail but will just document your motivation and some of the finer nuances that will affect your gameplay.  I mentioned earlier that the “main” character, Alex Roivas, plays as a sort of middleman in a sense, moving around a hub world, her family’s mansion, solving puzzles to unlock the next chapter.  The game starts with Alex receiving a call from police telling her that her grandfather was found beheaded in his mansion.  She arrives on the scene with little details or clues from the police force, leaving her to decide to stay at the mansion to find out what happened to her grandfather.  She quickly discovers that her family has a bit of a secret history dealing with the twisted and paranormal.  She discovers a hidden room containing a book, the Tome of Eternal Darkness, recounting the stories of 12 other individuals dating as far back as 26 BC.  Each character plays the same with only some slight differences such as different health/magick/sanity values as well as movement/attacking speed.  The long and short of it is that there is an evil, near immortal being trying to summon a great ancient entity to enslave and feast on the human race, with each character you play as serving some important role in the task of stopping him, each providing a tiny bit of resistance that all builds near the end with Alex’s pivotal task of finally putting an end to his plan.

The very first character you play as happens to be this very villain.  Pious Augustus, a Roman Centurion in Persia, is travelling with fellow soldiers in a desert when he hears a faint voice calling his name.  He follows the voice to a Stonehenge-like structure, which teleports him to an unknown temple.  Here he finds three artifacts, hovering above pedestals, each aligned with their respective God: Chattur’gha (red and power) Ulyaoth (blue and magick) and Xel’lotath (green and sanity).  It is here where you are tasked with choosing which God for Pious to align himself with; effectively deciding which alignment will be the driving force against you in the game.  This will determine what types of enemies you fight and when and where you find your magickal runes.  Certain alignments will be easier or harder simply based on when you will be able to learn the healing spell.

Even though you are deciding a very important factor for the game and its story, this is essentially nothing more than a filter.  The events in the game will still play out exactly the same regardless of your decision, only instead of X God trying to enslave humanity and X creature becoming the boss of a level, it will now be Y or Z. 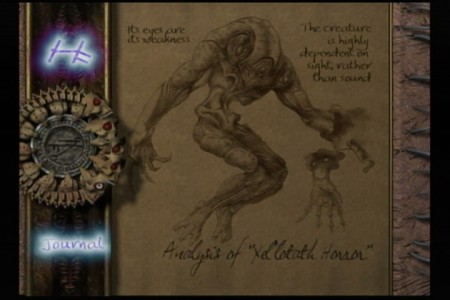 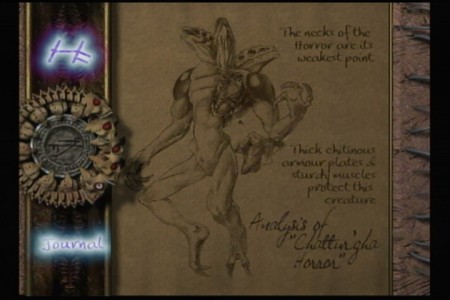 Some might be turned off to doing subsequent playthroughs of the game, and understandably so, although it is rather interesting/enjoyable to see the various creatures and entities that make up some of the more climactic scenes throughout the games story, not to mention the ability to unlock level select and eventually god mode (invincibility and infinite ammo) by doing the new game+.

In short, this game has a tremendous amount of character and ambition, providing the player with an enjoyable and unique experience, maybe even enjoyable enough to play through multiple times.  I myself have beaten this game easily over 10 times and still love it.

Eternal Darkness was developed by Silicon Knights for the Nintendo Gamecube.