With all this new talk of Xbox One and PlayStation 4, it can be easy to forget about all the amazing AAA quality games on our mobile devices. Enter Epoch 2 which is a strong reminder of that outstanding quality. With beautiful graphics, a strong soundtrack, plenty of creativity and intense gameplay mechanics, Epoch 2 is an impressive attempt at bringing a duck-and-cover styled shooter to your mobile phone. A strong recommend for gamers looking for something a little more hardcore than the average iPhone title. 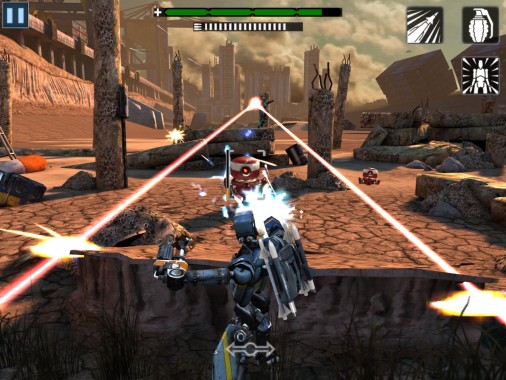 Think Gears of War meets Infinity Blade. Have I got your attention yet? Epoch 2 attempts to bring cover shooter gameplay to your phone by getting rid of a few vital elements: a trigger and a control stick. That may sound a bit odd, but Uppercut Games have found a way to make it work impressively well. Epoch 2  plays in a similar fashion of endless runner titles that rid of movement in favour on focusing on making quick decisions. Players take control of a robot named Epoch on a futuristic battlefield, swiping in various directions to make him/it/whatever duck for cover. Selecting a target is as simple as clicking on it, and Epoch will shoot at the target until it is either destroyed, another target is selected or simply takes cover. Once all the enemies in the area are defeated, Epoch will automatically jump towards the next battlefield, ready for action. Without those pesky joystick or shooting buttons in the way, all the attention goes into pure duck-and-cover shooting action which is lot of fun. 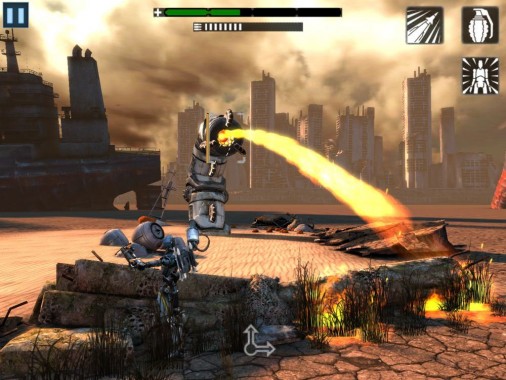 The game makes up for it’s limited movement by distracting you with hordes of enemies that fill the screen, giving a very Galaga-esque feel. While sometimes it feels a little claustrophobic, this problem is quickly fixed in later levels that allow Epoch to hide behind more and more obstacles over a wider range of space. To assist in combat a bunch of weapons are available, ranging from grenades, missiles and even a Max Payne styled bullet time mode all of which recharge after each use. These weapons among other things are also upgradeable, and this is where things start to get a bit rough around the edges. You see the difficulty of Epoch 2 increases very quickly with insane numbers of enemies on screen that get more and more powerful so upgrading is a really important factor. However, upgrades are also very pricy making it a challenge to even afford them. Thankfully, every level is replayable for more points with two extra modes – a mode with increased difficulty and also a time trial. While this is a nice addition, the fact the player will be forced to replay just to afford more upgrades really disrupts the flow of the game and becomes annoying to backtrack. To top it all off gameplay can get a little repetitive as very little is done to mix up the game mechanics besides different enemy types and boss battles. Still, at it’s core combat is freaking fun as hell. It’s just a shame there’s nothing more to freshen it up a bit from time to time. 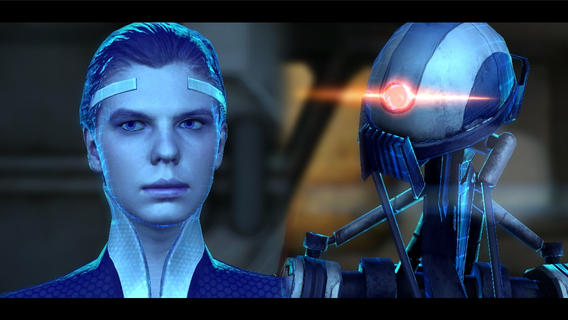 Epoch 2 is beautiful. Running on the Unreal Engine 3, there aren’t many mobile games out there that look as nice as this. The attention to detail is insane , with wonderful textures breathing life into even the most robotic of characters. Cut scenes involve some nice animation and some impressive facial expressions on the character Princess Amelia and a superb soundtrack and decent voice acting help set the tone and atmosphere for this post-apocalyptic world. This stunning presentation really helps the player engage in all the action and is a massive plus for the game, making it a true mobile AAA experience. 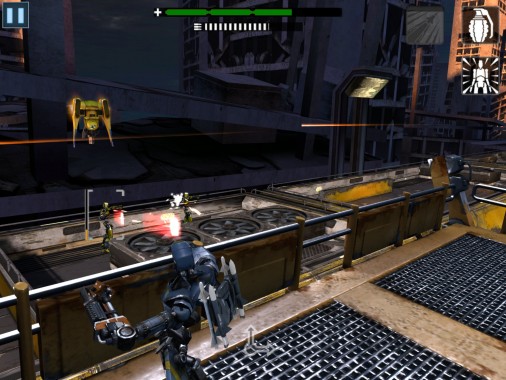 Epoch 2 is a strong recommend for hardcore mobile gamers. The game mechanics are creative and combat feels intense, cut scenes are done well and the presentation is absolutely breathtaking. While repetitiveness and expensive upgrades hold it back from seeing it’s full potential, the pros greatly overshadow the cons. If you’re like me where you’re sick of playing casual iPhone titles waiting for something new and epic to hit the app store – this is it, give it a go!