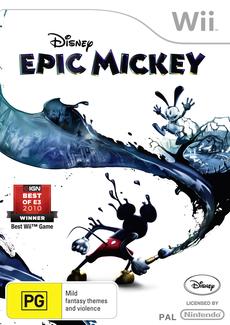 Being a massive fan of all things Disney I literally jumped at the chance to review the much talked about and speculated over Epic Mickey on Nintendo Wii. Without even laying a hand on the controller I had a distinct feeling that this particular release, something of a throwback as it turns out, would be right up my street.

In Epic Mickey you play as perhaps Uncle Walt’s most beloved character one Mickey Mouse who finds himself mysteriously transported to  the “Wasteland”, basically  an alternate reality version of the Disneyland theme parks. It is here that the game’s designer, Warren Spector, gives us an opportunity to see the familiar and often cutesy world of Disney from a vastly different perspective. Before moving on with the review it’s perhaps important to note that there is a slightly sinister, albeit magical, tone to Epic Mickey that whilst perhaps off-putting to younger players looking for more familiar Disney fare is also quite enchanting. 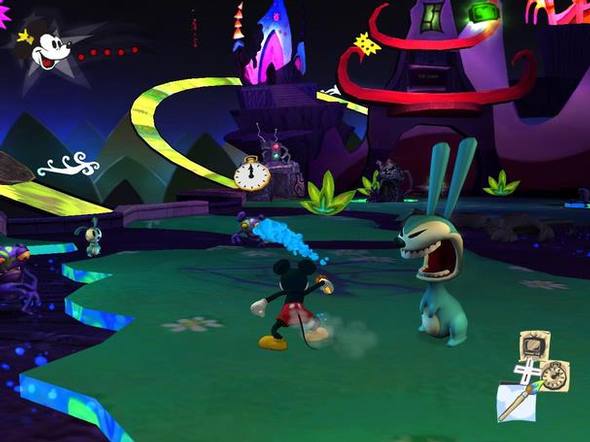 The Wasteland is inhabited by brilliantly designed, beautifully animated and often recognisable characters that continue the mysterious theme of the game as poor Mickey doesn’t always remember even the most familiar of faces despite the fact that they not only know him well but have in many cases starred alongside him in some classic animated exploits. This is of course a great concern for the amiable mouse with Mickey displaying guilt about his inability to remember them. Oswald the Rabbit, the great ruler of the Wasteland whilst envious of Mickey’s fame also has a grudging respect for our hero as over the last fifty years he and the rest of the Wasteland have watched from the shadows as Mickey has garnered love and admiration the world over. On the flipside Oswald with his band of Mickey’s former co-stars and also ran animated fodder have been left out of the limelight to the point where they have become completely forgotten. In this land it is Mickey who is the outsider and at times treated as a villain.

Whilst structured like a fairly traditional platformer there are many different, although often optional, objectives that can help you greatly along your adventure.  One particularly intriguing side-quest sees you helping a disembodied Goofy to reassemble himself as his body parts have been scattered across the Wasteland!  Another nice touch is the addition of some great side-scrolling 2D levels which serve as a portal between areas of the game ‘proper’. Within these levels you can find hidden collectable film reels of Mickey Mouse cartoons which can be unlocked in Mean Street, serving as the hub and the Wasteland’s answer to Disneyland’s own Main Street. These micro-levels will have players interacting with locations and scenarios from old black and white cartoons such as Steamboat Willy as well as many of the more modern classics. The nostalgia factor here is literally through the roof and really puts a new spin on what were otherwise entertaining but non-interactive experiences. 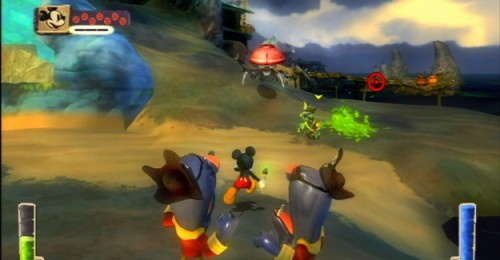 Mickey is armed with a large paintbrush this acts something like a magic wand and can be used in a variety of ways. The main aim of the paintbrush is to perform certain tasks, for example, if you use the wand to thin out a painted wall you may be lucky enough to find a hidden room. Another use sees you repair a broken bridge by using your brush to repaint the missing section so it can be crossed. Control of the wand is very intuitive using the Wii-Mote and I found this interaction to be a particularly fun part of the overall experience. Your paintbrush can also be used in combat against the Wasteland’s more nefarious characters and during fights you will have the option to either eliminate your foes altogether by erasing them completely with paint thinner or simply splashing them with paint. Splashing them with paint will convert former foes over to your side where they will help you take down any other nearby enemies. This is something of a plus as some particular sticky combat situations will see you otherwise overwhelmed by enemy forces. Mickey’s other abilities range from the old platform standard double jump to a deadly spin attack (performed by shaking the Wii-Mote) that in most cases will render an enemy unconscious for a short period of time.

However it is something of a let down that when as a good mouse you quite literally re-paint the town only to find it returns to it’s usual somewhat drab appearance should you exit and later re-enter a level. This does render the paintbrush good/evil aspect a little redundant and the game itself less of a unique user experience. 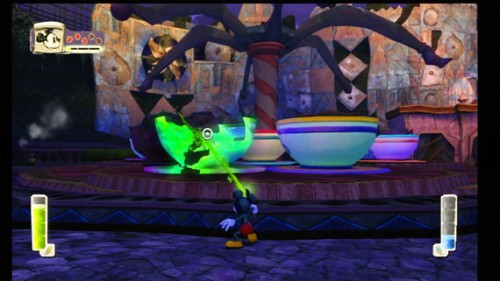 Developers Junction Point have provided players with a moral choice to accompany the often stunning levels and unique puzzles. Will you embrace the dark side by using thinner to eliminate or stay true to Mickey’s past form by using paint to convert and enrich the characters’ and locations? Your decisions will alter the story and the world around Mickey – even changing Mickey’s appearance…

The graphics are absolutely spot on with some quite stunning 3D levels sitting alongside some nostalgic and well implemented 2D side-scrolling sections. Although not a huge issue given the otherwise lavish appearance the framerate does occasionally drop and sometimes animation on some of the Wasteland folk can be a bit spotty, with some looking absolutely great and others a little underworked and lost within the environment. 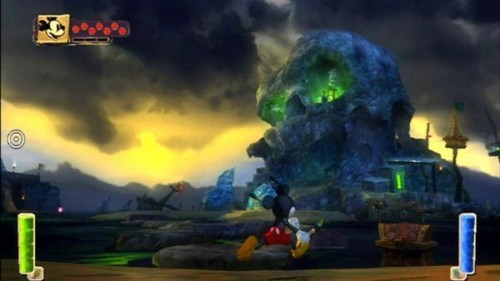 Perhaps the only real downside to the game is the camera which throws you more odd angles than Breakdance 2: Electric Boogaloo! Trying to perform tricky jumps can be extremely frustrating as the camera angle often auto-adjusts to the most awkward and unhelpful position possible resulting in some very unfair deaths and much repetition and guesswork. Even manually adjusting the camera does produce the desired result more often than not and getting caught in a corner and not being able to move the camera into a more favourable position is downright awkward and almost made me give up on some occasions. Almost but not quite as the storyline is gripping and the beautifully realised environments enough to keep most players interested and plowing onward. Checkpoints are also plentiful within the game so even many, many untimely and frustrating deaths caused by the camera are not insurmountable.

The soundtrack is fun and ranges from the ambient and atmospheric to some really catchy, and sometimes recognisable,  tunes. I am pretty sure I caught the Small World theme in there somewhere although i’m not sure if that’s a good or bad thing! Sound effects are also plentiful and well realised with Mickey’s familiar tone and catch phrases perfectly implemented. 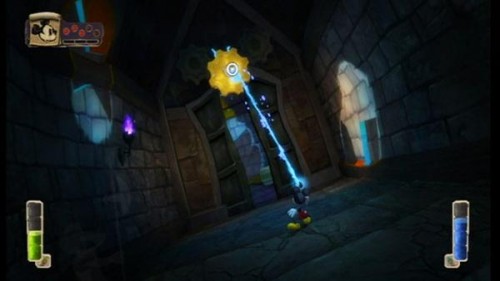 Spector and the team at Junction Point have really worked hard to harness the magical imagination of Disney within this game. There is a lot to love in Epic Mickey and those lucky enough to have visited one of the theme parks will no doubt be delighted to see some familiar areas and even rides, notably Space Mountain & The Pirates of the Caribbean, given a fresh spin.

Although there is much to enjoy, Epic Mickey falls slightly short of being a true epic with the sum of it’s parts being greater than the whole. That said players will find an addictive and well realised platform adventure awaiting them and with around ten hours of solid gameplay and a fair bit of replay value there is plenty of fun to be had. The deal-breaker here for some will be the camera which can be incredibly frustrating at times but again the love and attention heaped on the game will make most overlook this, no matter how tetchy it gets. Those that persevere will find much to enjoy in Epic Mickey which as it turns out something very special indeed.

I give Epic Mickey