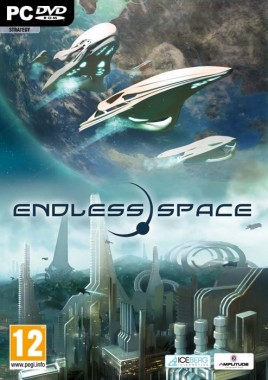 Endless Space is the latest entry into the 4x genre, which for the uninitiated, comprises explore, expand, exploit, exterminate as core gameplay ideas. Typically turn based strategy games but also taking in some real time examples, the genre toes a fine line between tedious and intriguing, inaccessible and complex. Economy management, army building, colonisation, scientific research, it can either be a time sucking vortex that manages to make six hours seem like one, or a lengthy slog through a ton of incomprehensible menus.

The studio behind Endless Space is French independent developer Amplitude Studios, who carry the tagline of ‘Gamers who know how to make games’. Indeed Endless does feel very much like it has been built by people not only well versed in the genre but those who enjoy it as well, and the game is sure to appeal to most fans of this particular style.

The gameplay mechanics of Endless Space are very familiar to veterans of this genre. Starting out with virtually nothing, players must pick their own path to victory, taking turns to build new ships, spend resources and build an empire. There are a good variety of factions on offer, each with a distinctive set of strengths and weaknesses that lend themselves to a particular style of play. You can play as anything from science led Amoeba to all consuming Cravers, with up to seven other AI or human players available to cause you problems. If you so desire you can even customise your own faction, which is just one of the ways in which Endless Space quite willingly puts itself in players busy little hands. Game set up shows off a great array of customisation, but in all honesty there’s very little here not seen before. 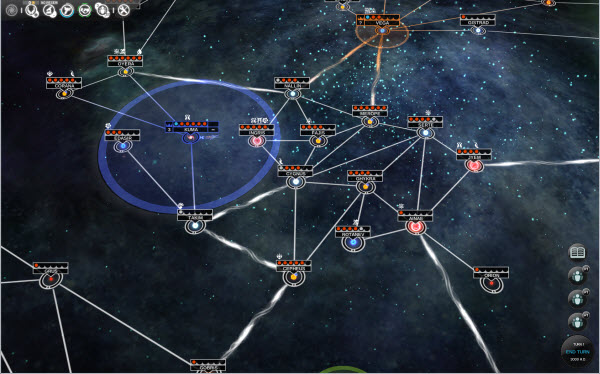 That said the presentation and user interface of Endless Space is very well designed, and although the tutorial could do with a little more interactivity there are very few things that will permanently puzzle.  Every significant event is flagged up by a handy notification, cutting down the time spent delving through menus. Almost any piece of info needed can be found with a simple mouseover, a good thing too given that technologies like ‘Relatavistic Markets’ don’t scream out the obvious benefits like the tech trees of past/present set games.

The space setting does give the game a very lifeless feel, and although I did adapt to it after a while Endless Space never hits the charm or personality levels of other genre stablemates.  Diplomacy is very much a small part of the game and despite an opening impression of a deep wealth of lore, there are next to no appearances from it ever again. There is something slightly soulless about this game, particularly in single player, and whilst it is exceedingly well built there is no particular factor or mechanic that stands out, nothing with a WOW factor. Multiplayer of course helps to up the human factor, but what kills it stone dead again is ‘kill the host, kill the game’.

Small gripes aside it is easy to lose hours to once the initial bout of learning is over. The AI is by no means a pushover even on normal difficulty, and opposing factions are not the only thing out to ruin your chances of galactic domination. Planets have a massive variety of factors that can make or break them as settlements, with terrain types, size, moons and anomalies (such as a hollow core or long seasons) demanding a well thought out research path to make them effective in your empire.

There are also heroes to be recruited, who depending on their speciality can either run a star system for you, or bolster your military. These guys level up with use and can be tailored to even more specific strengths. Ships too can be designed by the player, allowing parts unlocked by scientific research to become important features of your fleet. It may be too much of a hassle for some, but the ability to build yourself a tailored flotilla with a customised leader will add an extra layer for those predisposed to win by extermination.

The actual combat is a little unusual, and sees the camera pull out from it’s distant view to let you in on the action. This can all be skipped via an auto-battle button, but if you opt for the manual conflict then there is more of chance to outdo the odds that may be stacked against you. Battle is split into three phases, and each side picks from a set of ability cards to perform in each round. It’s pretty much rock paper scissors with sci fi terminology. The animation of the ships battling out is great to see the first few times, but eventually it becomes a time sucking repeat to be skipped over in favour of more important things. Combat is a little restricted strategically, and those who favour aggressive play styles may not find enough grit here to satisfy when repeated ad nauseam. 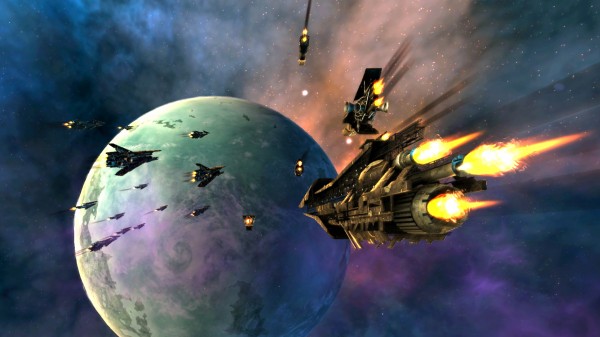 It is easy to play Endless Space for hours at a time, but whether it can rip fans away from established franchises like Civilisation is debatable.  Whilst the build is strong, glitch free and logical, it is also lacking in personality. A strong lore is hinted at when creating a new game, but it disappears almost entirely when in action. Character and charm is what turns games like these into life consuming entities, and Endless Space never quite hits that mark, instead floating around the mildly addictive tideline.

From a design point of view Endless Space is slick, simple and easy to manage.  The graphics aren’t going to tax systems very heavily, but they still do a very good job and provide pretty space scenes and details. Icons and text are clear and the whole user interface makes sense, is easy on the eye and manages to convey a lot of information without becoming cluttered. The sound is fairly limited, and although the atmospheric music is suitably chilled  sci-fi that doesn’t prevent it from becoming boring. A smidgen of voice acting could have been expanded upon to help the titles personality problems, and the effects suffer from a similar lack of spark. They are there and they function, but that’s about it.

Endless Space is an impressive entry into the 4x genre but not one of it’s brightest stars. It’s unlikely to convert those not already a fan of the style, but for those who already know their empire building strategy there is a substantial, smart title here ready for some copious amounts of time to be spent on it. The voltage needs to be turned up on the personality, combat and sound design, but the generous amount of things to manage and the rock solid interface will go a long way to hooking in genre fans.