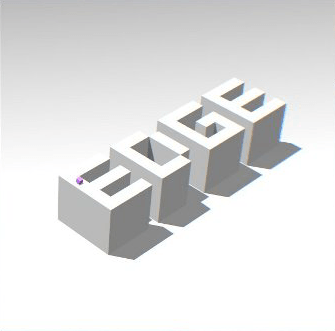 Overview
Mobigame and Two Tribes joined forces to conjure EDGE to the Steam Network. Originally made as an iPod App, Two Tribes converted the touch and tilt controls to the PC by utilizing directional keys. By tapping the UP ARROW key, this review is well on its way.

Story
EDGE does not yield a compelling story about a kidnapped princess in a far, far away kingdom. However, EDGE provides a competitive nature that captivates a player just like a storyline. All a glowing cube needs is a nice colorful home. 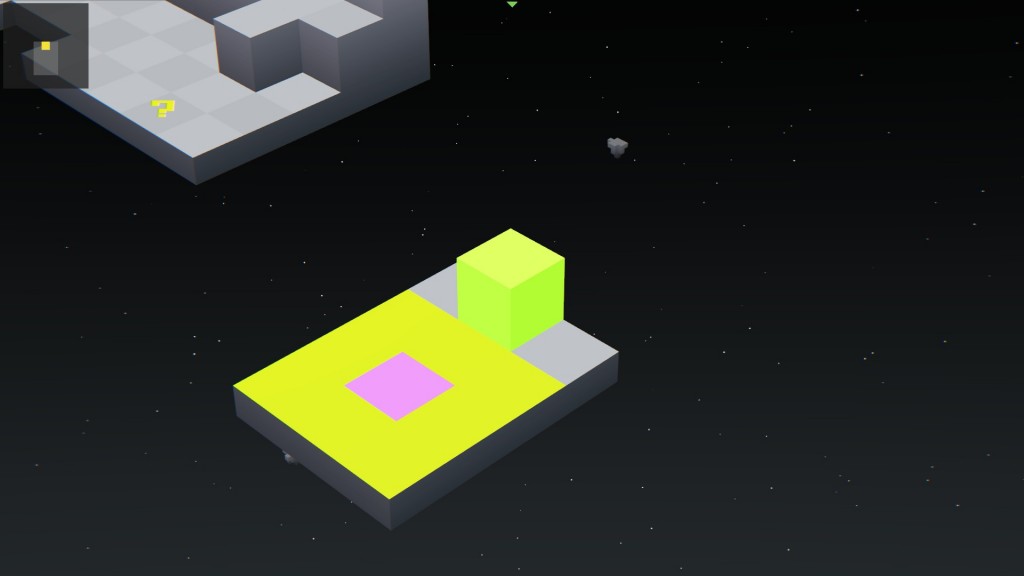 Gameplay
Making up for a lack of storyline, the gameplay proves to be engaging and fast pace. The ultimate goal of EDGE is to move the cube to the finish area in record timing. An additional goal to the game is collecting prisms which allows the player’s cube to move faster. The prisms are generally visible but perhaps difficult to navigate. Once the player reaches the finish, a rank will be displayed along with several other stats. The ranks are as follows: D (slow), C (not too bad), B (good score), A (gamer), S (professional), S+ (edge master). To able to attain “S” ranks the player must collect all available prisms in the level along with a fast time. 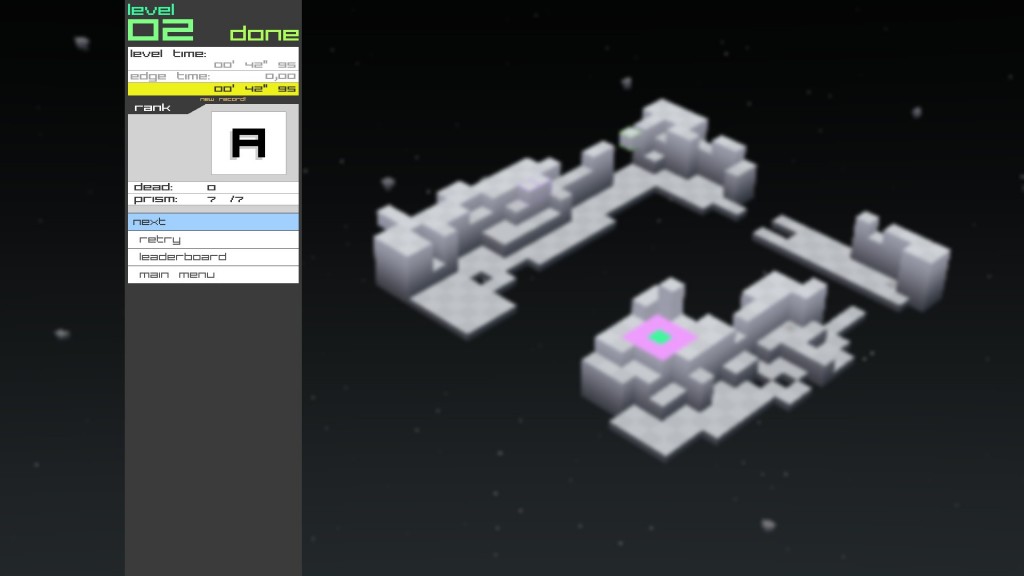 Progressing through the 48 normal levels, the environments pose more obstacles to lead players to their certain doom. Bumpers, sliding cubes, and falling platforms can muddle times reducing ranks to C’s and D’s. But helpful hints are available for those “not-so-nice” areas. A question mark on the surface of a block will display a hologram upon touch. The hologram will show the player an instance of how to cross a certain path. 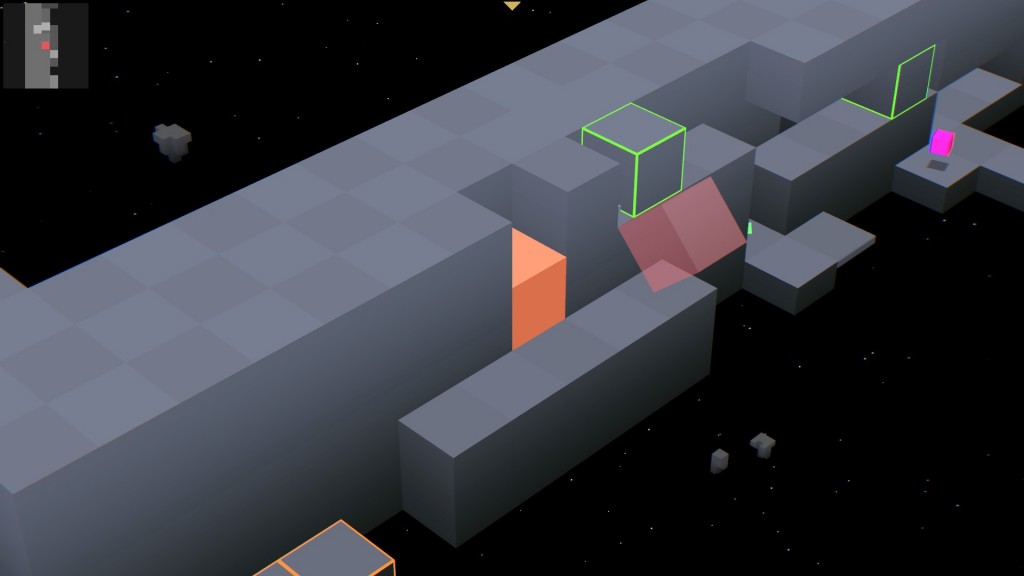 In addition to the 48 normal levels, there are bonus levels and achievements to unlock. The bonus levels test your mind a bit further through complex tactics. A method called “edging” must be used more readily and accurately to ensure a safe landing in most cases. Edging is a term used to describe the cube’s grip on an adjacent block. Any time spent edging is also deducted off of the timed run. Players can also unlocked achievements by edging for prolonged periods of time.

A competitive game would only be complete if it had leaderboards and in-game chat availability. And the player can do just that with Steam in the mix. By logging into the game under a Steam profile, a player may chat with other active players. As players complete levels, their rank and score is tabulated and stored. The tabulated score is then compared to the rest of the updated scores on the global leaderboard.

Graphics/Audio
While displaying very simple art assets, EDGE shines with bright glowing colors and old fashioned audio. The game itself was designed with the “8-bit” retro look in mind. The levels are created with cubes and platforms that are colored white to grey – simple and clean feel. The player’s cube is a consistently changing bright color to distinguish from the rest of the blocks. By collecting prisms, the color changes more frequently. 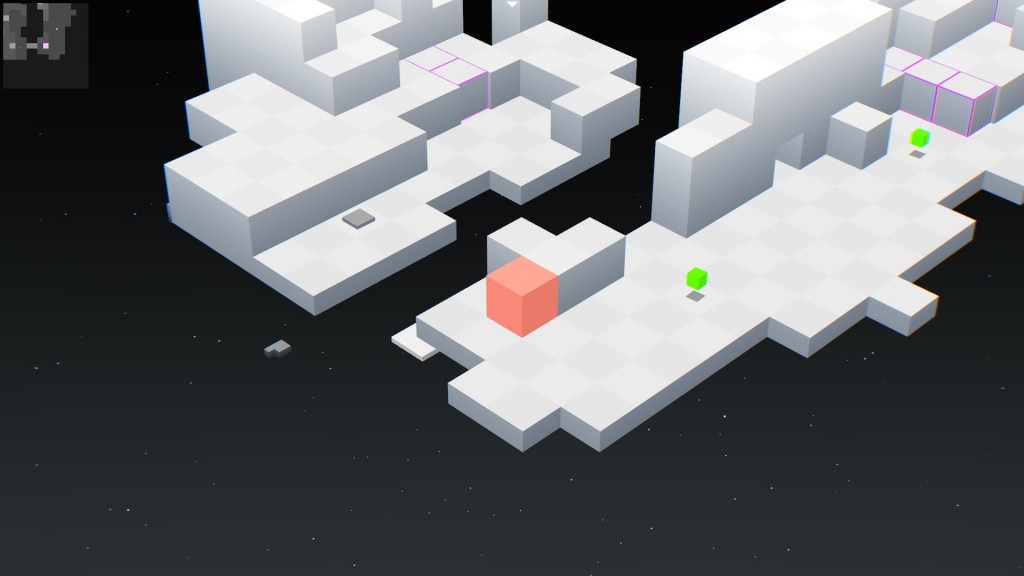 Upon entering the main screen, a soothing tune tingled my ears. The sensation only continued as I heard the sound effects from clicking from menu to menu. Normally, I would sense these effects to be annoying. Once I entered the first level, an upbeat tempo hardly prepared me for an abrupt start. But I gladly welcomed the variety of tunes as a retro platformer.

Overall
While the game entranced me in a continuous fight to the finish, I felt that Mobigame and Two Tribes proved EDGE would be great. I believe the game did not require a storyline strictly because a story could potentially over-complex the purpose. EDGE is meant to be a fast pace objective game that offers a plethora of levels to entertain the achievement seeker. Allowing players to test their metal against others on the Steam leaderboards, only adds opportunity for a growing community. Not to mention players will have a lot of ranks to pursue with 50+ levels of finger-eye coordination.

Finally, the graphics and audio adds the finishing touch. With a retro 8-bit look, the game brings back the appearance of older generation titles. Let’s just face the facts. Molding retro aspects with new flavor is just the EDGE we need.

At the same time Two Tribes are launching the Two Tribes pack,  the pack contains 3 games – Toki Tori, RUSH and EDGE – and you get a discount of 20-25% depending in which country you are based

Two Tribes is also hosting a contest surrounding there new title EDGE. If you have ever encountered someone planking, then you might have an inkling what edging is about. Grab onto a ledge and edge your way to some great contest prizes. The contest will end on August 15th, so make sure to get your videos posted! For more contest information click here.