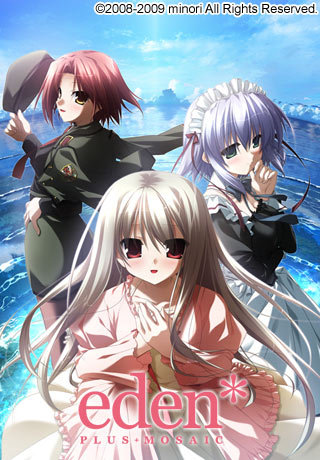 Overview
With the rising popularity of Japanese visual novels in the West, it has led to a number of unique titles being released in English. While many of these may be eroge with a story to establish the world or simply nukige, a number of titles with a focus on story have been released in English. The most recent of these is MangaGamer’s release of eden*PLUS+MOSAIC. Featuring the original eden* story plus the adult content released separately in PLUS+MOSAIC from the original game, is eden*PLUS+MOSAIC worth your time?

Story
The world is nearly at the end of its life. Nearly one hundred years prior to the starts of eden* a red star appeared in the sky. Despite humanity having little knowledge of what this star was, the findings of a lone scientist proclaiming that it meant that the Earth was going to die a hundred years from then drove humanity to try and unite. You see, thanks to the events prior to this finding humanity had nearly been wiped off the face of the Earth due to constant warfare and with an already diminished population, the “Earth Unified Government” was created in order to prioritize humanity’s survival above everything else. 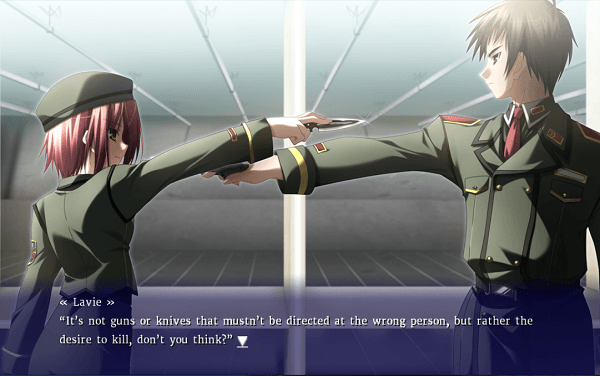 To do this, the nations joined as one and anyone who resisted was put down through might. With only a hundred years left, a lone woman named Sion came up with the plans to transport all of humanity to space in order to find a new home. Over the past hundred years humanity and Sion have worked to reach this dream. The reason Sion has managed to live so long is because she is a “Felix,” a genetically engineered human with an extended lifespan, eternal youth, and intelligence surpassing any living human and Sion is the smartest of them all.

Ryou Haruna has spent most of his life on a battlefield. After the disappearance of his parents and meeting a mysterious woman before she too was taken away from him, Ryou swore at a tender age to try and find this woman he called his sister once again. Because of this he has seen nearly everything on the battlefield and even became a decorated special forces member. Now with Earth at peace and nearly everyone evacuated, Ryou is assigned a new task… guarding the woman who made the designs of the spaceships that saved humanity a possibility until the last ship leaves behind the dying planet within a year. 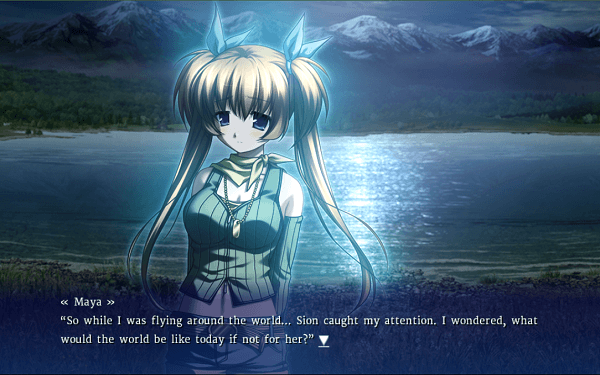 From here we see Ryou, who has experienced a difficult life and thinks of himself as nothing more than an attack dog meant to be given orders with no purpose in life, meet with the odd but energetic maid Elica and the enigmatic Sion. Surrounded by military personnel and hidden away on a secluded island, Sion has known nothing but confinement since the moment she was born and while she still labors away at making sure everything involving the Earth evacuation plan goes smoothly, we see that she has never experienced freedom.

It is worth noting that eden* is a kinectic novel meaning that there is only one story to be told here and it is quite an emotional one that not only dredges up Ryou’s past and chance meetings but also crafts a love story with no happy ending in sight. Thanks to the nature of the world ending and the seemingly endless youth of a Felix coming with an abrupt expiration date, those who wish to experience an emotional story will find eden* pulling at their heart strings as Ryou and Sion grow closer to one another throughout the course of the visual novel, following them from the middle of a military base until they are the last two on the planet. 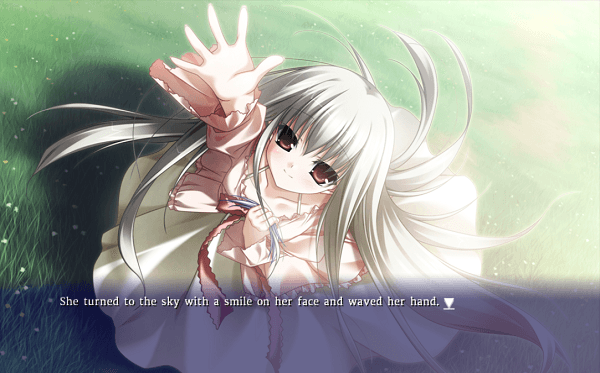 That being said, thanks to the focus of the game being mostly on Sion and Ryou, the rest of the side-characters introduced, such as the maid Elica, Lavie (Ryou’s partner in guarding Sion), the commanding officer Inaba, and a reporter named Maya. Their characters are explored slightly and there are plenty of hints as to what may have been (and is partially explored in the PLUS+MOSAIC scenes), but unfortunately they are given only the smallest bits of closure.

The same can be said in regards to the actual process of Earth’s evacuation and what is happening to the planet. Despite plenty of details being revealed concerning the way that the Earth became the way it is, including the wars that were fought and how humanity sees Sion almost as a goddess, the real cause of Earth’s impending demise isn’t explained and the actual details of the evacuation are only mentioned briefly despite the government’s persistence in making sure every member of humanity leaves Earth before the end. 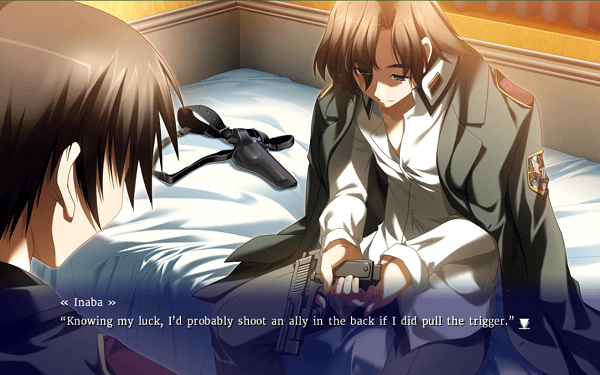 Now, eden*’s story is completely self-contained while PLUS+MOSAIC is contained as a bonus. There are four scenes in total here, some of which are “what if” styled scenes that give players a few extra details concerning the side characters in the story as well as some comedic moments thanks to each bonus involving a decent amount of dialogue before the actual adult scenes take place.

Gameplay
As mentioned earlier, eden* is a kinetic novel meaning that there are no choices to be made nor are there any endings other than the main one. As such those who wish to experience the game will be able to do so once and see the entire story, though it is quite a good one. This can be disappointing for some who may have wished to see more elements explored in the story. 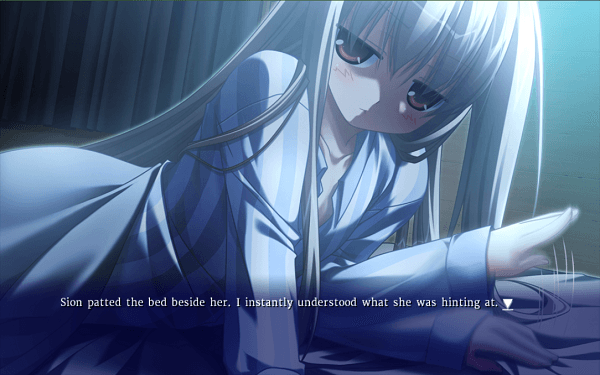 It is worth noting that the four eroge scenes in PLUS+MOSAIC are locked away until the player finishes the main story which is for the best. This way all of the player’s focus is spent reading a poignant story without interruption.

Visuals & Audio
eden* PLUS+MOSAIC is rather surprising visually as, rather than use static sprites that appear against various backdrops like most games, almost every scene in the game is designed to look unique. This is thanks in part to Ryou being a fully realized character with a face and personality who will be seen standing or interacting with other characters during dialogue. Another nice touch comes in the form of full lip-synching being done on the characters so that their mouths move as they speak while also blinking their eyes. As for the actual sex scenes that take place in PLUS+MOSAIC, each of the four scenes still feature mosaic censorship on both male and female genitalia but every scene features a number of CGs and some decent variation. 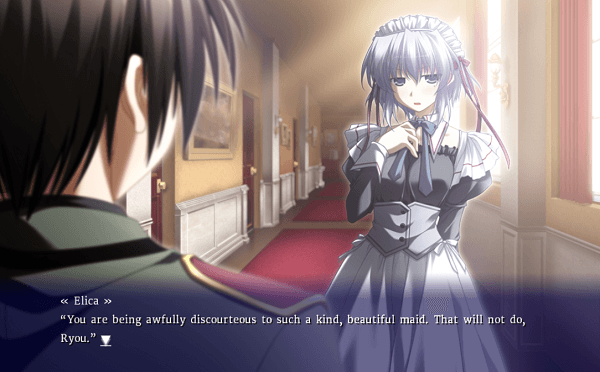 The background music found throughout the game is quite soothing and fitting for the theme of eden*, especially in regards to a certain character’s fondness for a song. As for the characters, every character, including Ryou, is voiced which is surprising considering the male role generally goes unvoiced in games such as this but it makes for a nice plus as the full voice work continues into the sex scenes as well.

Overall
eden*PLUS+MOSAIC is an emotional journey that has a few flaws in world-building and handling side characters but focuses all of its effort in creating a memorable drama involving Ryou and Sion. Watching these two as they change throughout the course of the visual novel and begin to develop a deep connection on a dying world leaves a lasting emotional impression that will make eden* hard to forget and a visual novel to not pass up.