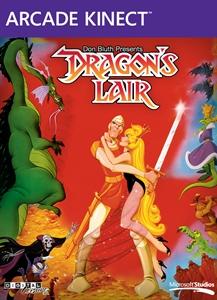 Story
When it comes to the plot for Dragon’s Lair, you really can’t get more basic. It’s your duty to take control of a clumsy hero by the name of Dirk the Daring and save a princess from the clutches of a dragon. Yeah, we have seen it all before, but this title really paved the way for Mario and Zelda in terms of a general narrative, and those who have not yet visited this lair are sure to find many small elements that have been nodded to quite a bit since 1983. 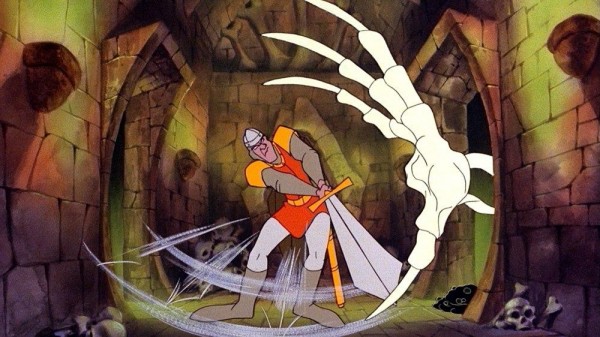 As far as other characters go, there are a few other faces to see aside from the bumbling knight. Princess Daphne is still the vixen she always was, Lizard King has remained menacing, and seeing that final famous cutscene is still as pleasing as it ever. There isn’t a lot more to say when it comes to story due to the short length of the game, but in true Bluth-styled fashion , this plot is campy and comedic the entire way through as it never takes itself too seriously, which is what makes it simply timeless. 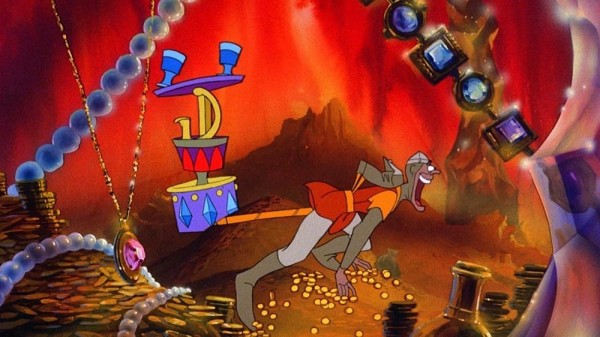 Gameplay
As far as the actual gameplay goes with a standard controller, you will more than likely have to have a bit of nostalgia soaked in to appreciate what’s on display within Dragon’s Lair as it’s age does show. Players must watch the game unfold through the FMV sequences, and hit an appropriate button on the D-pad (or attack with the action command) at the right time to have their actions reflect the choices of the main character. For instance, if Dirk is falling, hitting left at the right moment can pull him up to safety, with the wrong input leading to a quick and immediate death. Players also must choose appropriate paths and attempt not to trigger booby traps as they traverse through the castle, which can also lead to death if performed incorrectly. It’s a game all about trial and error for the most part, and anyone with a lack of patience will find themselves frustrated within minutes due to Dragon’s Lair’s quick-to-kill punishment. Now, you do respawn right where you left off – so it isn’t too bad, but there were a few moments I had to wonder if the timing was a bit off 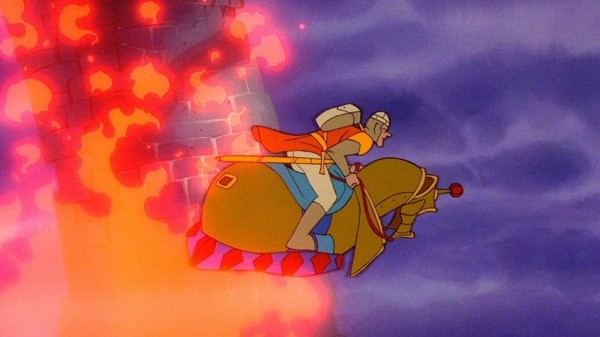 The new feature this time around is the added in Kinect support. Things still play out the same while utilizing the motion control, but you can now use your limbs and body to literally mimic Dirk. It’s a nice inclusion and works well enough, but I honestly preferred the controller as there just isn’t a lot to it. That really isn’t this port’s fault as Dragon’s Lair has always been a pretty straightforward title, but seeing some new sequences or mini-games added to actually push the purpose for the Kinect would have done a lot in terms of replay value. To be fair, there is a co-op mode, but this is a last-minute inclusion as well as it just requires two players to take turns as they make it to the end.

Visuals/Audio
Much like the story, the visuals are also pleasant and crisp, which goes to show just how much of an impact this title made so long ago. Animations are fluid and keep the pace of the game moving nicely, delivering some quality entertainment to those who are involved, or to those who happen to be spectating. Yes, the art style is fantastic, and it’s hard to spot a fault in this hand-drawn castle. However, I did feel as if I was running in place a bit too often due to re-used scenes that are mirrored just to pad out the length of the game. On a good day, most will be able to see everything Dragon’s Lair has to offer in under 15 minutes time. When half of the game is just mirrored images of previously visited locations, the appeal can quickly wear off as those gray hairs begin to stick out like sore thumbs. 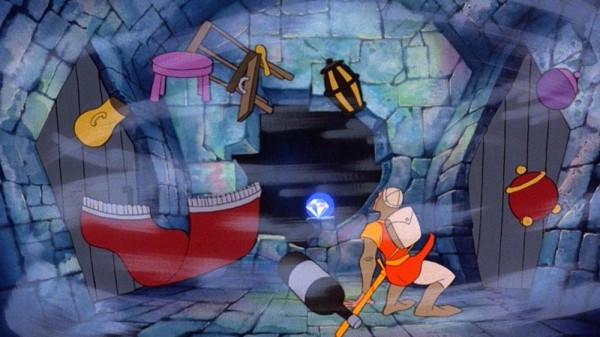 Much like the visuals, there isn’t anything wrong with the sound. The music is utterly brilliant and creates a nice tone for the action sequences, while the light voice acting brings the cast to life – just like an iconic Disney film (SAVE ME!). Again, the sounds are retained for the mirrored scenes, which means you will be hearing the same effects more than once, so get used to any audible cues or effects early on as you will be quite familiar with all of the lot by the time you do battle with the dragon.

Overall
Dragon’s Lair did so much for the industry that it’s hard to show the game any kind of hate. Sure, there is re-used footage throughout and a good amount of repetition, but that delightful tale shines through brightly and makes this journey worth taking at least once. Even with Kinect support, this title doesn’t deliver enough to be truly fulfilling though, and unless you crave a hardcore nostalgic blast, the value just isn’t there. Dragon’s Lair doesn’t need my assistance to prove it’s worth, but newcomers might be more interested in checking out one of the many other options to play the game, rather than try it in an inferior form.